BACK TO ALL NEWS
Currently reading: Britain's Best Company Car 2020: BMW 3 Series 330e
UP NEXT
Entry-level SUVs on the way from Volvo and Polestar

Why the BMW 3 Series 330e won: Your bank manager will love it, but you will even more: the 330e is a car of quite extraordinary all-round abilities.

The 330e is just one of the winners in this year's Britain's Best Car Awards - see the full list here.

In April, there was a generational change in company car taxation designed to push drivers towards electric and plug-in hybrid models.

Benefit in kind (BIK) on electric cars was reduced all the way down to zero, and to between 2% and 12% on plug-in hybrids, depending on their electric-only range.

Electric cars generally remain unsuitable for many a company car driver covering a significant daily mileage typically due to charging speed and network reliability, so plug-in hybrids have quickly become the default choice for company car buyers to swap their diesel mile-eaters for. And none does it better than the BMW 330e.

The tax bill for someone running a 330e was cut by close to £1000 a year for a 40% taxpayer as a result of the new rules, moving down to a 10% BIK rate. Its 320d diesel stablemate, for so long a brilliantly well-rounded company car option itself (remaining so if, for some reason, you don’t like the prospect of a DIY pay rise), attracts a 27% BIK rate.

It’s a financial no-brainer, then, yet the 330e is not merely a car designed to save you money. It is a brilliant member of the 3 Series family and an interesting and highly capable car in its own right. The 330e’s trump card is just how well it disguises the complexity of its drivetrain compared with so many of its rivals. 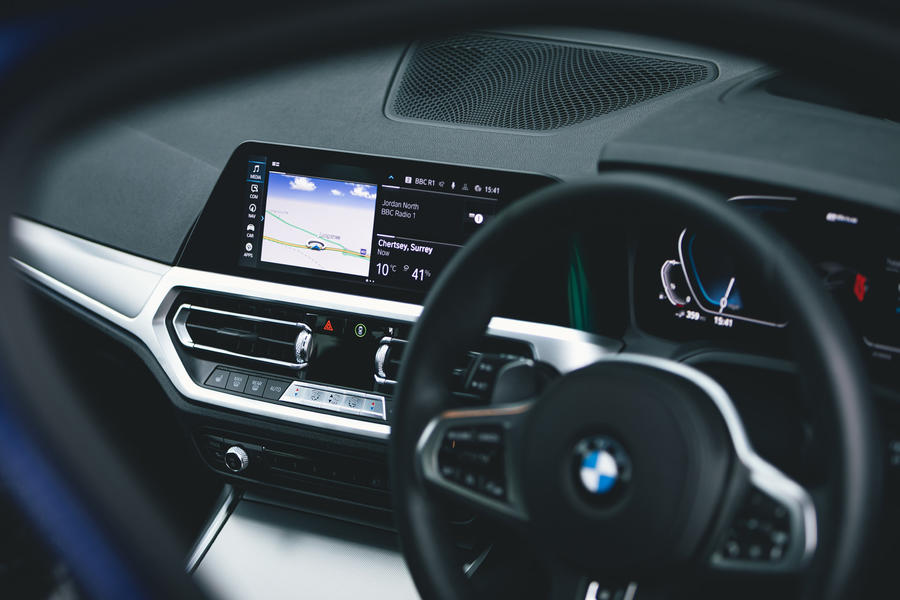 Not only is the integration seamless, but the differing driving experiences offered by the various modes can also completely transform the driving experience from all-electric, whisper-quiet Tesla baiter one minute to rapid, near-300bhp performance saloon the next.

Is this crucial plug-in hybrid version of the big-selling saloon a true BMW to its core?

Still, most of the time, you’ll just leave the 330e to its quiet brilliance as we did when we ran one on our own fleet earlier this year. Of the 6203 miles we travelled in the 330e, 2892 were solely on electric power, which goes to show not only the benefits of being able to charge at home and at the office to maximise electric range, but also just how many journeys are short enough to be driven solely on electric power in the first place.

The 330e wins on the calculator and it also wins on the road. It’s not just the drivetrain that excels but its dynamic prowess, too. Despite the extra weight of the hybrid system, the 330e remains a powerful, poised, rear-driven sports saloon no matter how hard you push it. As our four-and-a-half-star road test verdict noted, it has plenty of sporting character and can be as quick across the ground as almost any other 3 Series, and as engrossing to drive, in its own way.

The 3 Series has long felt a special car, yet BMW is finding new ways to evolve it. The 330e is not just a great company car but a great car.

Now that you can choose between saloon and estate bodies, as well as rear wheel-drive or four wheel-drive options, the 330e really is the definitive modern company car. I love the way the chassis and powertrain shrug off the sense of complexity the car has, and really start to work together, when you pick up a bit of speed.

I’d have one on little wheels and skinny tyres, probably fairly light on optional kit. Don’t think I’d bother with xDrive – but a Touring definitely appeals.

How can it be a great company car, when its being recalled because if you charge it it may catch fire, so eefectively its a very heavy, thirsty petrol powered lump that lugging around a load of extra weight and complexity, and costing considerably more to run than you claim because it cant run on electricty, and may not for the foreseeable future..