BACK TO ALL NEWS
Currently reading: Audi Q7 2019 facelift to bring new tech and greater efficiency
UP NEXT
2022 Audi E-tron set for major upgrade

Audi is readying for another bumper year of new car launches and the latest addition spotted is a mid-life refresh for the Q7 SUV.

The Volvo XC90 rival has been on sale since 2015 and an updated version will arrive not long after the A4 facelift in June 2019. New spyshots show the seven-seater in light disguise undergoing cold weather testing.

The images reveal that the Q7's exterior design will be brought into line with Audi's latest large models, including the A6, A7, A8 and Q8. As such, it's possible to see a new front fascia with a wider grille, larger lower intakes and reprofiled LED headlights. At the rear, it adopts new tail-lights inspired by the E-tron electric SUV, but it doesn't appear to feature that car's full-width light bar. 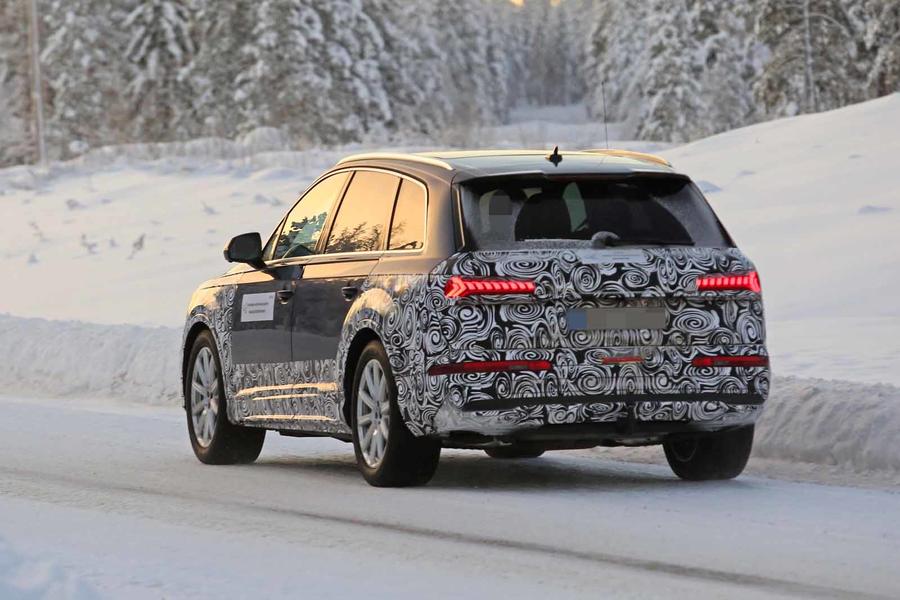 Major changes are expected inside. The Q7 currently features one of Audi's older interior designs, with a free-standing infotainment screen and button-heavy layout. Audi is rumoured to be investing heavily to transplant its new-style dashboard, with its minimalist look and dual-screen infotainment system - necessary to extend the Q7's life into early next decade.

Powertrain changes will include the adoption of 48V mild-hybrid tech across most variants, increasing efficiency. It's not clear yet whether the diesel-electric Q7 E-tron plug-in hybrid will make a return after going off sale due to WLTP emissions testing delays and the same goes for the SQ7. Intel coming out of Germany suggests Audi might switch to a six-cylinder petrol powertrain to bring it into line with the SQ5.

Audi preparing bigger A4 and A4 Avant facelift for 2020

If its a rival for the XC90

When the punter is sitting in the showroom..

...going through the options list it all works well enough.

In today's technology age touchscreens are suppose to impart a sense of coolness in their looks and operations and in addition to being deemed as advanced and a step ahead of 'analogue' controls, some car manufacturers see touchscreens as features to make their products appear more premium, superior and more advanced. Yes, touchscreens do look great and they work very well on a phone or tablet but in a car, it's a nightmare to use and also dangerous at times too. My car has touchscreens for many controls and it's a pain in the arse and far from instinctive to use either.