BACK TO ALL NEWS
Currently reading: Alpina D3 Biturbo vs Audi A7
UP NEXT
Alfa Romeo to show new sports car in early 2023

Alpina D3 Biturbo vs Audi A7

In spite of the headlines and hullabaloo, now could be the perfect time to buy a fast diesel executive car. But does Audi or Alpina rule the roost?
Open gallery
Close

The dieselgate scandal will have to run on for a long time yet, in this tester’s opinion, before it starts to seriously dent the appeal of either the Alpina D3 Biturbo or Audi A7 BiTDI Black Edition.

And none strikes that bargain in more compelling terms than these two: near-50mpg real-world cruising efficiency, sports-saloon-level performance and CO2 emissions you can report to your accountant without so much as a hint of sheepishness. It’s all here. And – besides BBC Panorama presenters and ostracised and embittered former Volkswagen Group executives, perhaps – who wouldn’t want it?

Some will say that now’s the wrong time to be spending big on a performance diesel. Let them say it. My reply is that the uncertainty only strengthens your bargaining position.

Act quickly and you could probably get an eyebrow-raising discount on a range-topping diesel A7 if you found a dealer with a car in stock and a need to get it off his books. Enough to bring this £60k car down to the price of, say, an ultra-rare, discount-proof, handbuilt Alpina D3? I’d imagine so. 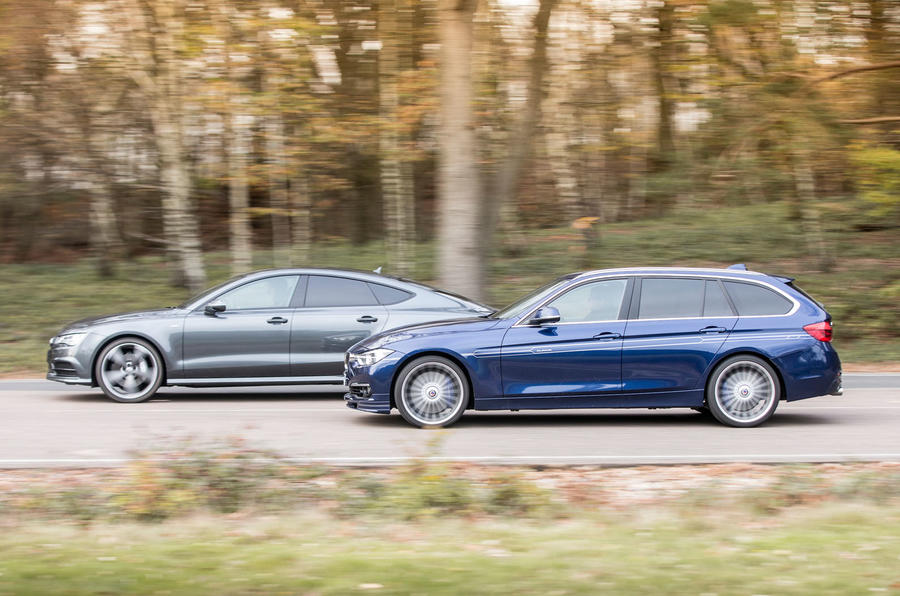 So, assuming you’re willing to take an educated gamble, which way should you jump? It wasn’t very long ago that the decision would have been made for you. BMW had the fast diesel niche largely sewn up for a decade or more. That was until three years ago, when Audi started ushering its 3.0-litre, 300bhp-plus BiTDI V6 diesel into its Audi A6, A7 and Audi Q5, giving people an alternative to BMW’s 35d models for the first time.

Renowned BMW tuner Alpina subsequently leaped to the defence of Munich’s honour, fitting an overhauled 345bhp twin-turbo 3.0-litre straight six into its D5 Biturbo in 2012, and then into the current F30-generation 3 Series-based D3 Biturbo in 2013. The D3 Biturbo was cracked up as the fastest diesel production car in the world and, along with the rest of the 3 Series, has just been facelifted.

So as well as the many mechanical tweaks to the standard 3 Series’ steering and suspension made for BMW’s facelift this year, the Alpina D3 Biturbo inherits BMW’s improved interior, on top of which Alpina adds its own inimitable layer of material lavishness, notably via beautifully tactile lavalina leathers and downy Alcantara.

The D3’s is now a cabin entirely becoming of a £50,000 car, whose new satin chrome highlights set it off a treat. Alpina’s usual hallmarks – white-on-blue instruments, Alcantara steering wheel with blue and green stitching, those Alpina crests on the steering wheel boss and seats – lift the 3 Series’ ambience to new heights of richness and charisma.

But the A7’s interior is equally rich in its own way, and even more solidly constructed, although its style is much more restrained. Our test car’s mix of black, silver and grey trims make for a much more sombre feel than the D3’s. But although some of the Audi’s fittings are showing their age, its technical highlights – intelligent LED headlights and a large multifunction colour trip computer capable of relaying navigation mapping in crisp detail, to name just a couple – still really distinguish the car. 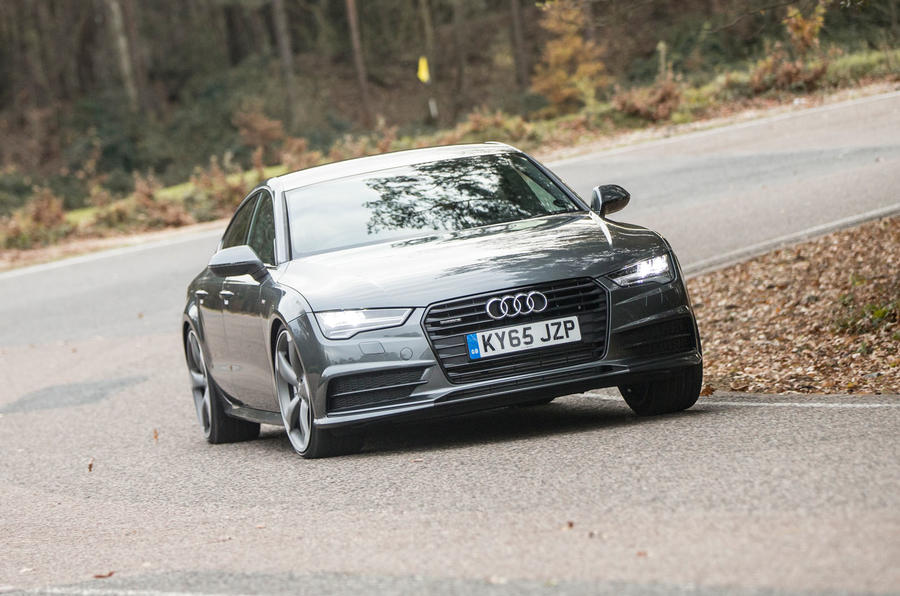 The Audi’s front seats are larger and more comfortable than the Alpina’s, its second row better endowed with leg room and its boot more generous on overall capacity in normal five-seat mode, below the window line.

The Audi is the bigger car, of course, so such things should be expected. Sure, the Alpina’s cabin is the warmer and more inviting, but it’s the Audi that’s the more luxurious, and comfort matters in an everyday-use high-mileage motorway machine.

But outside-lane punch matters, too. And although the Audi’s superior size wins it points on long-range comfort, it also threatens to prevent it from scoring as a driver’s car.

Being at a disadvantage to the Alpina on peak power and torque is one thing. Exacerbating that with almost 200kg of extra kerb weight is another. But in practice, the difference between the D3 and A7 on outright performance is only just large enough to notice – and there’s actually a bigger difference in the style of delivery. In other words, these apparently quite similar cars are separated not so much by how fast they go, but how they go fast.

The Alpina’s straight six has a more sporting edge than the Audi’s V6. It wants to tear up the rulebook and rev like a turbo petrol engine – and its gearbox is tuned to allow that, being always keen to kick down and often reaching a ratio lower in the ZF eight-speed gearbox than you expect. Flex the D3’s accelerator and you’ll find engine and gearbox work to keep the revs between 3500rpm and 4800rpm. That, in turn, maximises the rate of acceleration, but it doesn’t conform to the fast diesel stereotype by falling back on a tide of mid-range torque.

The Audi, by contrast, does exactly what you expect it to do when you waft the accelerator pedal towards the carpet. It plays the performance GT instead of the sports saloon, choosing a higher gear, pulling from lower revs, riding its surge of torque from around 2500rpm and rushing forwards like a powerboat rising out of Lake Como. All of a sudden, the car doesn’t feel all of its near-two tonnes.

Audi’s exhaust-mounted ‘sound actuator’ (a speaker to you and me) helps to fashion a more exotic warble for the car than the Alpina has and makes the engine one you can enjoy listening to – once you get over the fact that what you’re listening to isn’t really engine noise at all. It gives the A7’s performance a qualitative vibrancy as a repost to the D3’s superior quantitative urge.

All of which seems to be gently nudging us towards the conclusion that these cars aren’t actually cut from the same cloth at all, a suspicion that their ride and handling traits only confirm. Both cars strike a pleasingly pragmatic, road-appropriate compromise. Both are more supple and softly sprung than their 500-horsepower M and RS-badged petrol equivalents and can be laid back one moment and then agile and entertaining the next. But whereas the Alpina is a true athlete in air-cushioned loafers, the Audi feels more like a uniformed doorman in running shoes. 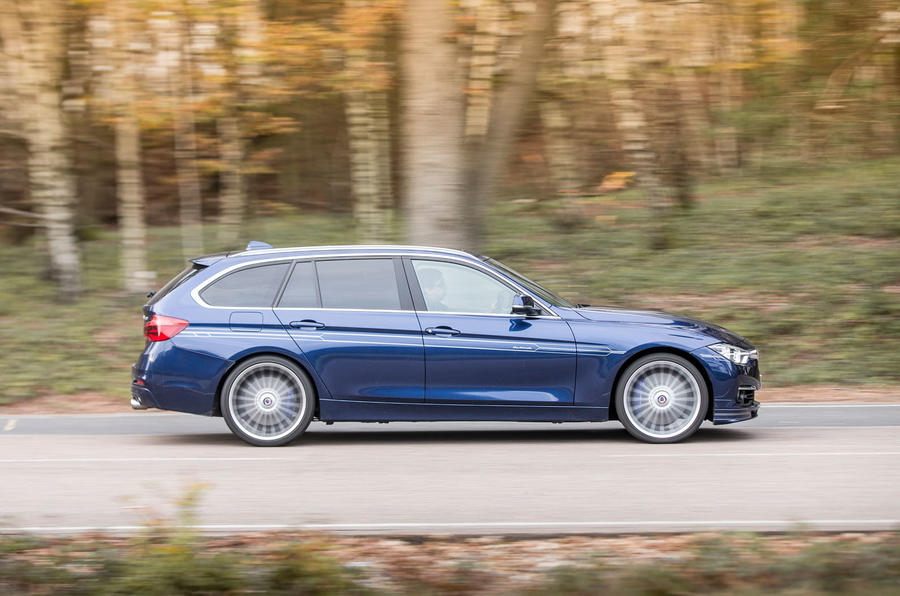 The Audi tries mostly to insulate your fingertips and backside from the workings of its mechanicals and the variability of the road surface under its wheels, allowing you to plough on as unperturbed as possible. In stark contrast, the Alpina’s chassis and steering acknowledge all but somehow filter out the patina of the road’s surface better than the Audi, while still feeding back the influences of traction, road camber, wheel deflection and cornering load much better through its controlsand bodily reactions.

The D3’s ride is slightly the firmer and more reactive and, at times, the A7’s body control is better, keeping its body flatter when push really comes to shove. But when the road is smoother, the Alpina’s agility and superior balance of grip make it a far more rewarding steer than the Audi, because it corners with more alacrity and engages its driver more vividly.

The D3 Biturbo plays perfectly to an audience of keen drivers who want to live in a world where a BMW M3 would be the perfect everyday car – but simultaneously recognise that they don’t. They accept that they need something relatively economical, comfortable and sensible but want to look forward to driving that ‘something’ every bit as much as they would a 500bhp super-saloon.

I suspect you could share out the 200 or so cars that Alpina sells in Britain every year many, many times among the readers of this magazine who’d identify with that description. And so the D3 Biturbo is this test’s irresistible and thoroughly deserving winner.

But it’s a winner on points, not by knockout, because the A7 BiTDI retains its appeal alongside its conqueror as the more elegant, luxurious, laid-back choice. You could even argue that it’s the more fit-for-purpose car here, for the wearing, high-mileage use that powerful diesel execs get. And, as losing hands go, that’s not a bad one.

Alpina D3 is almost all the car anyone could ever want

Strangely, and I will be castigated for this opinion, I would choose another continent eating machine.

I have just revisited Steve Sutcliffe's video report of both the D3 and the Cayenne V8 Diesel S.

For my lifestyle requirements, the Cayenne just outscores the D3.

Have a look at Steve's video of last Christmas.

Thanks Tuffty. Personally I think all BMW steering wheels are too thick, especially the M Sport ones, so I'm glad Alpina don't use it.
Tuffty 14 December 2015

They have indeed swapped to paddles. I think this was inevitable as the number of steering wheel controls increased. It would cost a lot of money to develop a custom wheel and, as the owner of that 8-speed 'box, it would be a complete waste. It's such a good 'box that I almost never use the manual controls. When it does take my fancy I tend to use the stick anyway. As for the air vent display, that's been around for years, google it. You can actually buy one as an aftermarket part for non-alpina models although just don't! What is a slight shame is that alpina use the SE spec wheel and don't offer an M Sport version. Here's hoping.
View all comments (6)