BACK TO ALL NEWS
Currently reading: Alfa Romeo Giulia to be reborn as segment-straddling EV
UP NEXT
Maserati MC20 Cielo is 621bhp McLaren 720S Spider rival

Alfa Romeo Giulia to be reborn as segment-straddling EV

Alfa Romeo’s premium-focused reinvention under the ownership of Stellantis is continuing apace, with the focus now shifting to a replacement for the Alfa Romeo Giulia saloon and, according to senior sources, the creation of a new large SUV flagship.

Speaking to Autocar at the Pomigliano factory in Italy that will build the recently revealed Tonale crossover, Alfa Romeo boss Jean-Philippe Imparato said that he had tasked the design team with looking at an unusual replacement for the Giulia. In addition, industry reports have been circulating about the development of a new range-topping SUV in the vein of the Porsche Cayenne, likely to be battery-electric.

Imparato told Autocar that the current Giulia and Alfa Romeo Stelvio SUV have “some years left to run” but he has already given a brief to Alfa Romeo’s designers (led since June last year by ex-Seat and Dacia design boss Alejandro Mesonero-Romanos) to consider, including a proposal for an estate-style car that might take on the new Genesis G70 Shooting Brake.

“I don’t want to give up on the sedan [saloon] market,” he told Autocar. “It’s in Alfa’s DNA to have a sporty sedan. But I also acknowledge that there were many suggestions that there should be a station wagon [estate] version of the Giulia. Maybe there’s a tipping point between the sedan and the station wagon. With a new Giulia, maybe we can have the best of both worlds.”

Imparato said that the Italian brand’s future product plans would be underpinned by “stability” – something that it has certainly lacked over the past 20 years and more. 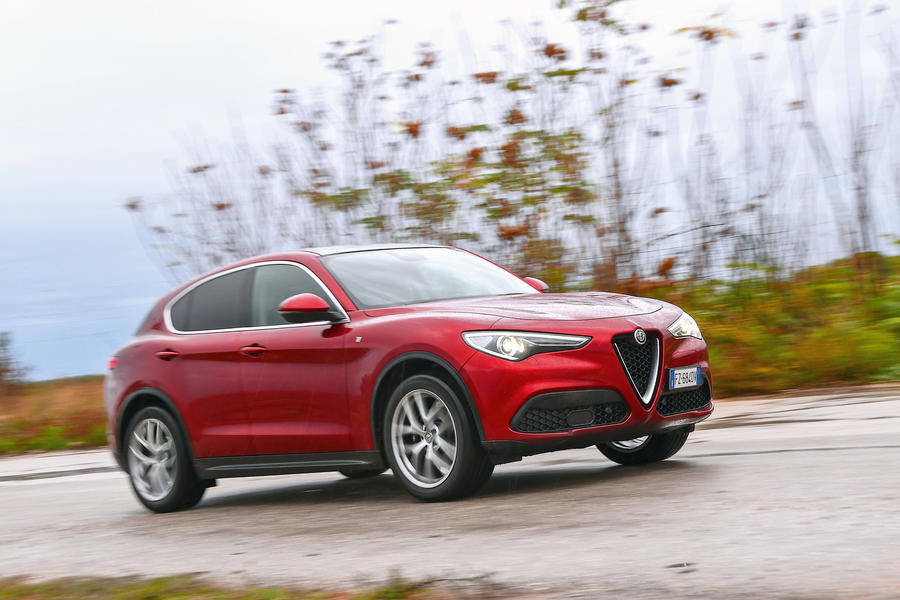 He explained: “Stability and not changing course every morning is essential to Alfa. The next five years of our product plan has been signed off and is funded [by Stellantis]. Next year, we will be fixing our product plan to 2028. And into the 2030s, we will be planning for quality, electric platforms and software.”

Imparato gave Autocar an outline of the future Alfa Romeo plan, revealing that a B-segment SUV (tipped to be called the Brennero) will be launched in 2024, followed by a fully electric car in 2025, another EV in 2026 (which could be the E-segment super-luxury SUV reported in the Italian press) and a third EV in 2027.

As yet, it’s not decided where each of these models will be built, although Imparato said that the Pomigliano and Cassino factories, both near Naples, will remain the core production bases in future.

Although Imparato wouldn’t go into specifics, it’s thought that the 2025 EV could be sold as a Tesla Model 3 rival, using the hallowed GTV name (as previously reported by Autocar) and benefiting from the kind of dramatic and distinctive styling Alfa Romeo is known for, with an Audi A5 Sportback-style four-door coupé format believed to be favoured.

Reports suggest the GTV could also be sold as a plug-in hybrid with a petrol engine while still based on the same basic flexible architecture. Imparato did give some extra clues to the 2025 car, saying it would be the first to benefit from a brand-new, cuttingedge Stellantis family platform.

Referred to by Stellantis as STLA and offered in four sizes, this will feature the group’s new electrical architecture, which includes 5G data connectivity, artificial intelligence and advanced driving assistance systems, as showcased by US brand Chrysler’s recent Airflow concept, below. 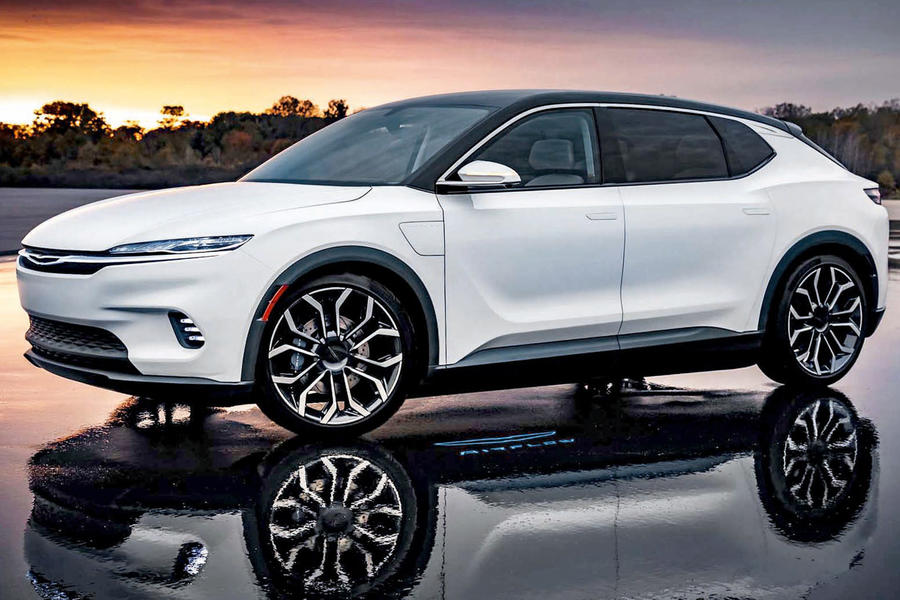 While the future Alfa Romeos will be built on Stellantis family platforms, Alfa seems likely to be offered some flexibility when it comes to suspension and chassis systems, particularly for its more upmarket models.

Autocar has previously reported Alfa Romeo product boss Daniel Guzzafame as saying: “We want to keep the good things from the Giorgio platform [that underpins the Giulia and Stelvio]. There are opportunities that we’re studying now.”

It’s thought the Giorgio’s steering and suspension hardware could be adapted for the new Stellantis platforms.

Notably, Maserati is the first brand outside Alfa Romeo to use the Giorgio hardware, which cost some £800 million to develop, with its new Grecale SUV riding on a re-engineered version of the platform.

The Grecale will become available as an EV in 2023, but neither firm has given any indication of how readily the platform will accommodate an electric powertrain.

The large electric SUV reportedly coming from Alfa Romeo – and likely to be positioned as a dynamically focused, upmarket rival to the new Lotus Eletre – could therefore blend elements of legacy ICE and bespoke EV platforms, with a view to differentiating it from other Stellantis electric SUVs, like the upcoming Jeep EV and Opel/Vauxhall Manta.

Autocar was also assured by Imparato that all Alfa Romeos are still being developed and honed by company engineers at the historic Balocco test track in northern Italy.

He added that “getting access to technology, the platforms, the electric architectures, batteries and infotainment would be impossible for me if Alfa were a stand-alone [operation]”.

Retaining a distinctive image and driving experience as part of the 14-brand Stellantis empire will prove a challenge for Alfa Romeo, because it will share components and architectures with more overtly mainstream brands, including Citroën, Fiat, Peugeot and Vauxhall. 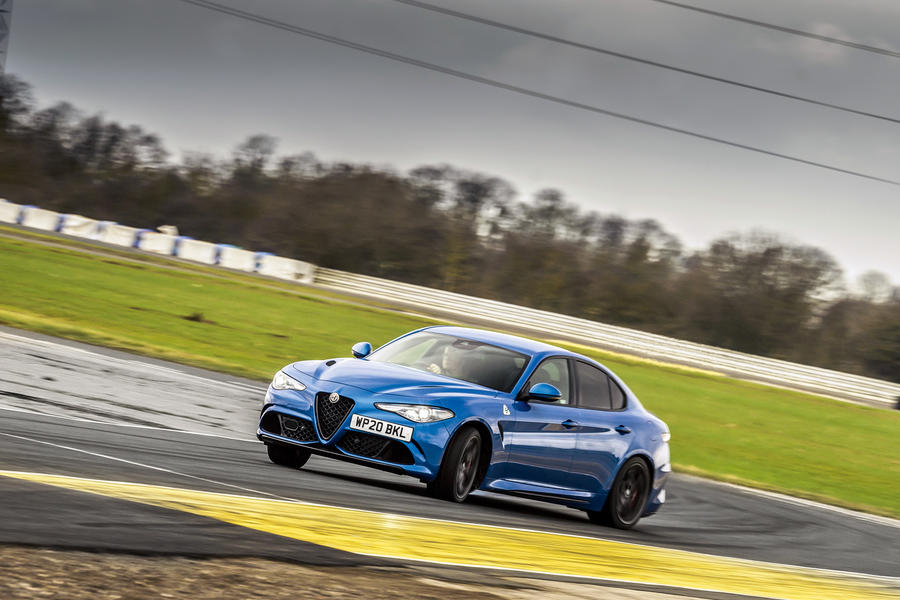 Aside from intelligently adapting group architectures, it will need to work even harder on distinctive aesthetics. Imparato emphasised this by revealing to Autocar his fundamental design requirements for future cars.

“The typology and elements that need to be defined are clear,” he said. “We must make bold choices. Alfa must be different; it must be very distinct in the lighting [design], the wheels, the steering wheel and the instrument cluster.”

Imparato said that he wants to “depollute” the interior of future cars, strongly hinting that Alfa Romeo will buck the trend of huge touchscreens. Future interior design will allow the driver to see just as much information as they want. 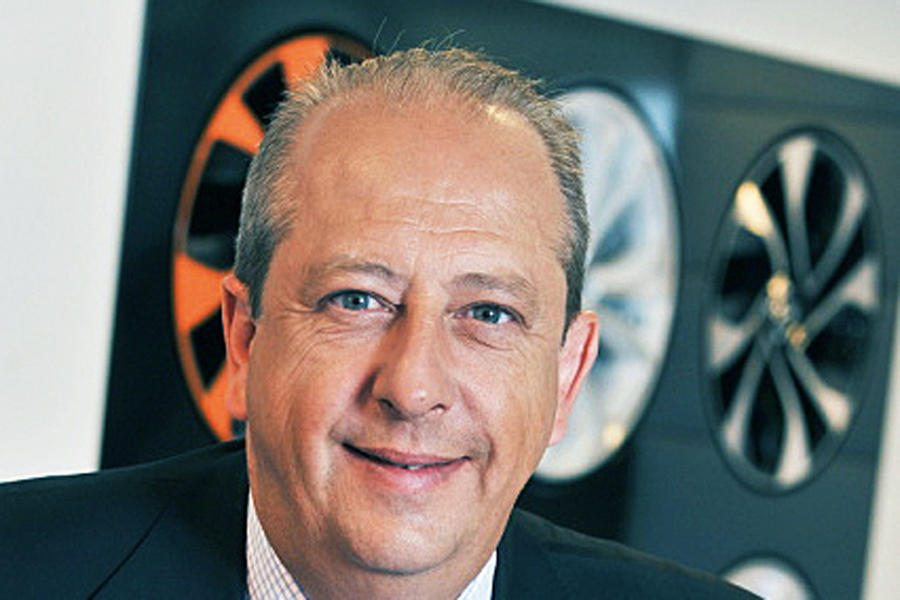 “Drivers should feel happy and have no stress,” he said, hinting at a philosophy of avoiding information overload.

Sources have hinted that future models could have more controls mounted on the steering wheel – a theme also being pursued by Ferrari. Alfa Romeo EVs also run the risk of ‘depolluting’ the classic ICE driving experience, but Imparato said he has ideas about how to resolve that.

“I will never allow fake noise [in future cars], but we might put vibrations back into an [electric] car,” he told Autocar, suggesting ICE-like vibrations could be fed through the floor, steering and seats in a ploy to retain enthusiast appeal.

These plans form a fundamental part of Imparato’s vision to revitalise Alfa Romeo. Thirteen months after he took the top job in Turin, his strategy is becoming clear: electrification and chasing the premium market but ensuring that the brand remains as distinctive as possible in a market that’s showing signs of convergence in design and dynamics. 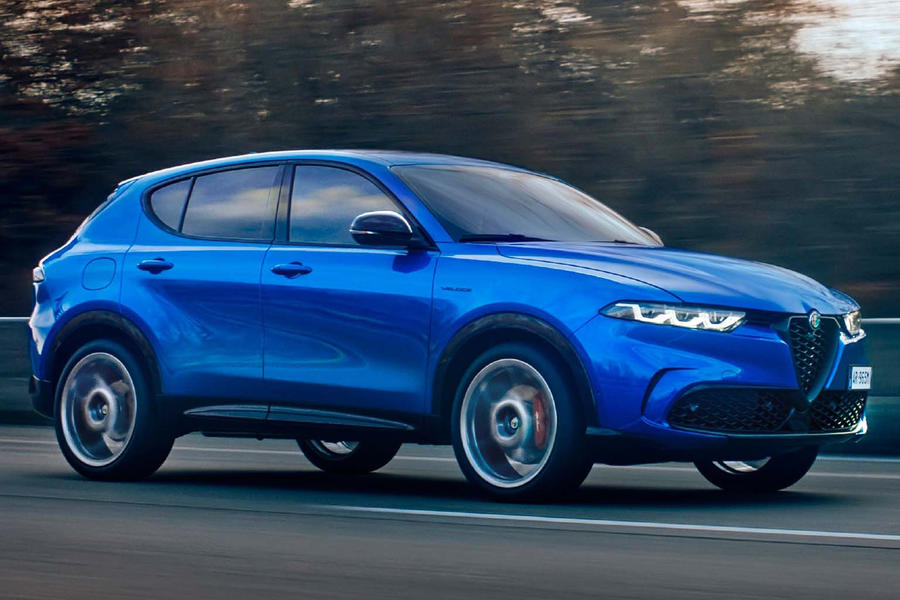 Tonale: New small crossover, which offers Alfa’s first plug-in hybrid powertrain, is due in the UK very soon and will gain an electric version if the demand is there. A Quadrifoglio also hasn’t been ruled out.

Brennero: A Ford Puma rival to open up Alfa’s expanding SUV range, the Brennero (named after a mountain pass between Italy and Austria) is expected in 2024 as a close relation to the Peugeot 2008. 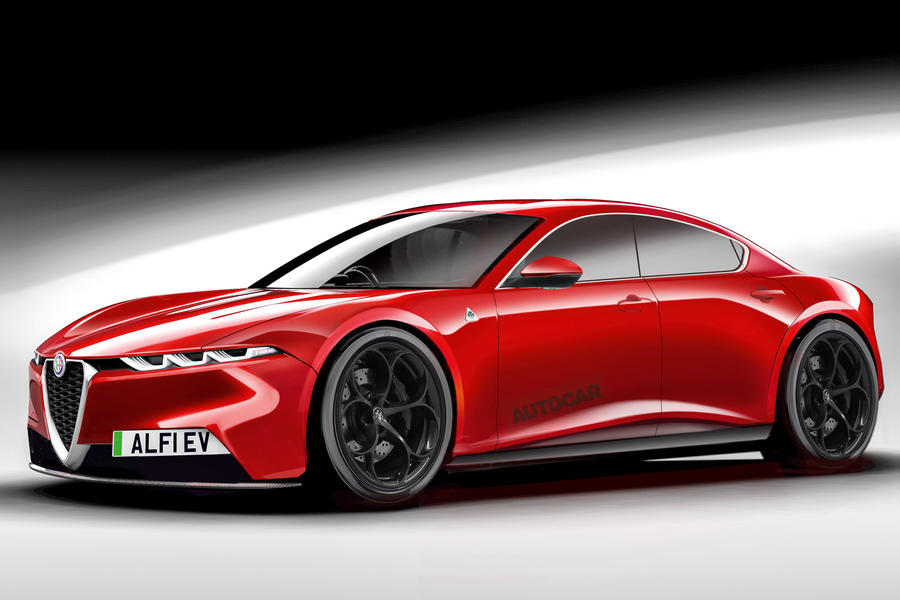 GTV: Hallowed GTV name is tipped to return for a rakish electric five-door coupé to take on the BMW i4. A plug-in hybrid powertrain option could be one of the final combustion cars Alfa launches. 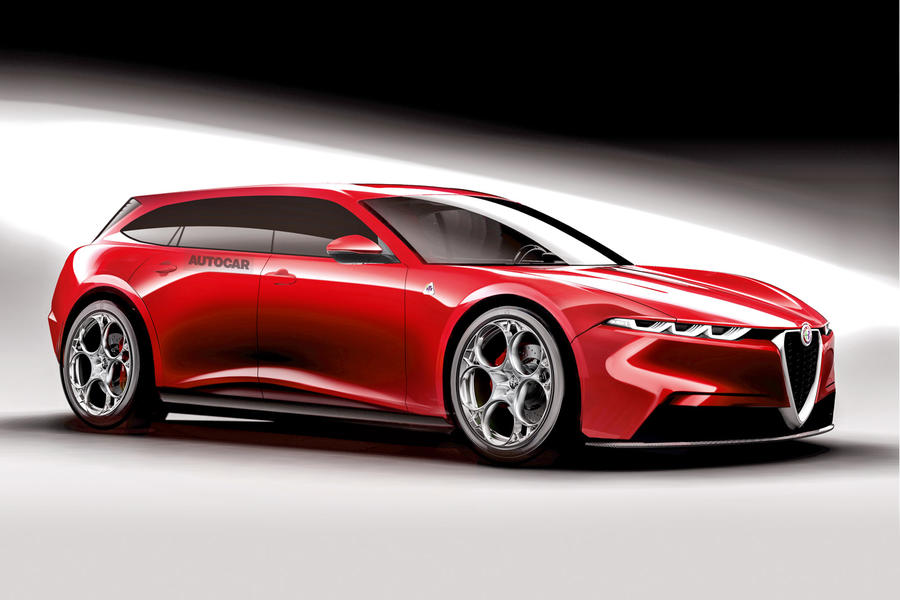 Giulia: The successor to today’s well-received Giulia, now in its sixth year, is set to be a less conventional shape, possibly straddling the saloon-estate boundary with a view to attracting more buyers. 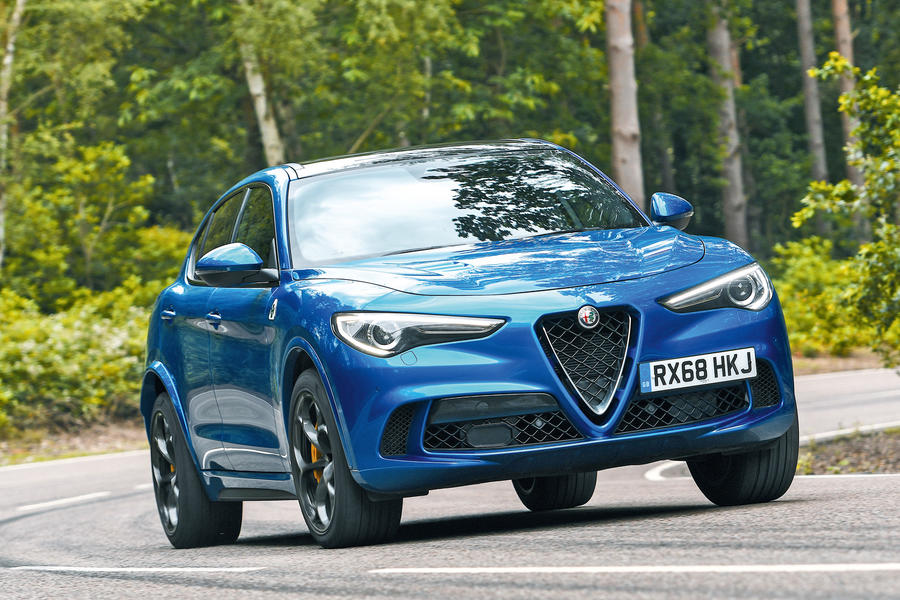 Stelvio: BMW X3 rival will return for a second generation alongside its Giulia sibling. It would be a good fit for the premiumfocused STLA Medium platform, said to yield a range of up to 440 miles 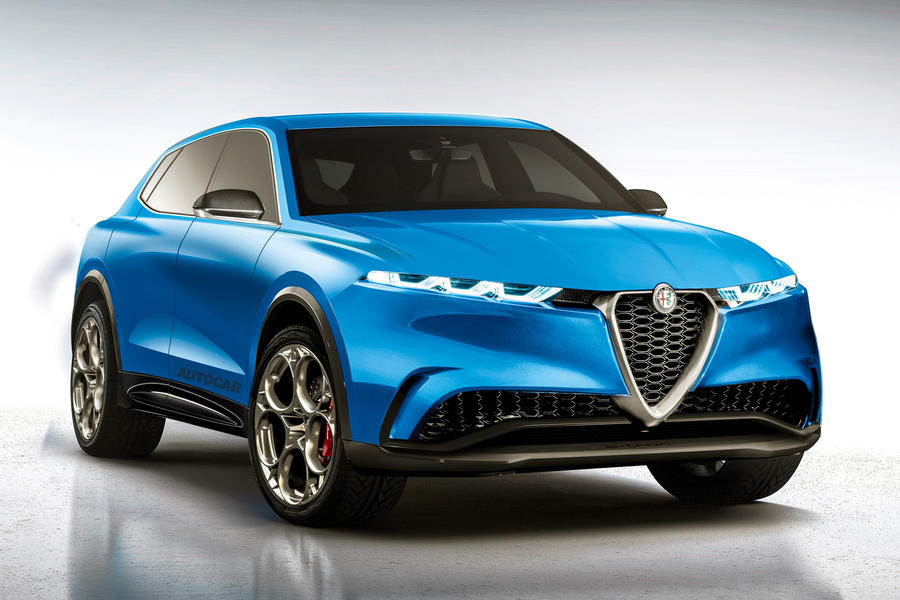 Large SUV: Audi Q7 rival will take Alfa into new territory and could be its first car to use the largest STLA platform. This electrified 4WD hardware will make production in the second half of 2023.\ 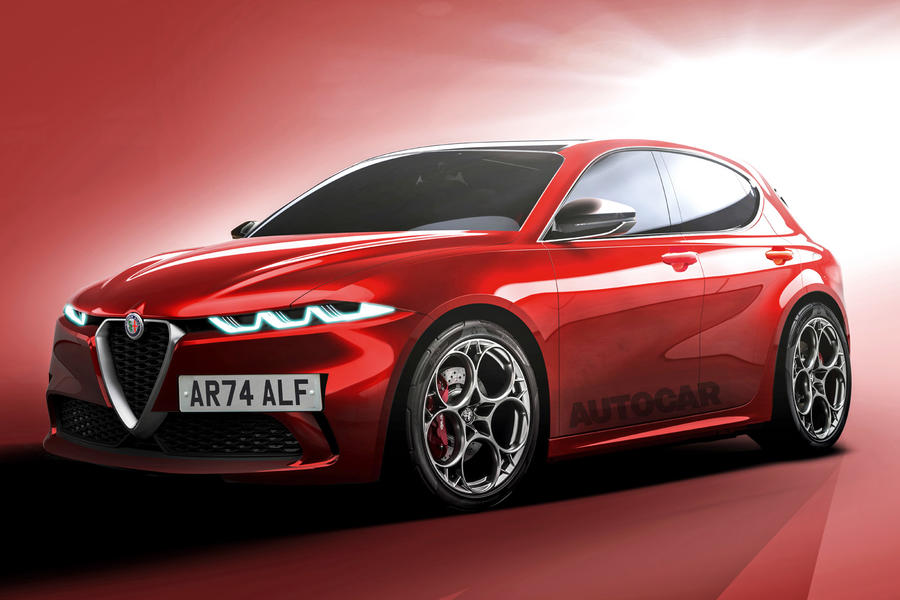 Mito: Stellantis’s EV platform family makes the prospect of a new supermini more feasible. It would be an urban-oriented EV atop the STLA Small architecture, making it a Peugeot e-208 relation. 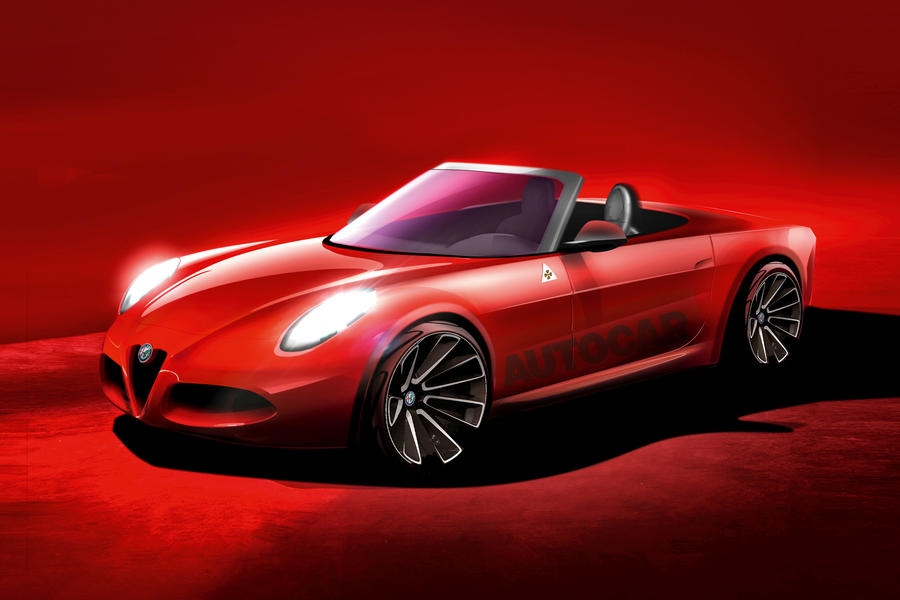 Spider: Imparato isn’t joking about bringing back sports cars. He has even shown dealers an early Spider EV design. But he concedes that bigger-selling and more profitable cars must come first.

The Good News - No fake noise.

The Bad News - Everything else.

Anton motorhead 3 May 2022
This sounds like great news for Alfa and fans. I hope Imperato fulfills some of the promises about Alfa's future. I look forward to the great looking Giulia Shooting Brake, the GTV, which perhaps should just be called the Giulia Coupe and the 5 door Mito. And no exaggerated and information polluted wide-screens? It sounds like motoring heaven. When can I place a deposit for the Mito?
sharpal 3 May 2022

Some of the most beautiful designs on offer but a ruined front end when they stick a lop -sided number plate on.