Alfa Romeo’s new Tonale marks the renaissance of the Italian brand under new owner Stellantis, in which it must radically overhaul its approach in order to survive.

The compact SUV, a rival to the Audi Q3 and Volvo XC40, is not only the first model to be launched in this new era for Alfa Romeo but also its first foray into electrification, which will rapidly take centre stage for the brand. From 2027, Alfa will launch only electric cars. Following the Tonale’s introduction this year, the brand will launch a new car every year until 2030, according to CEO Jean-Philippe Imparato, who previously ran Peugeot.

Alfa’s first fully electric model, a small SUV understood to be called the Brennero, will arrive in 2025, while a GTV-badged model, rumoured to be an electric four-door coupé, is also expected in the line-up. In addition, there will be replacements for the current Alfa Romeo Giulia saloon and Alfa Romeo Stelvio SUV, plus longer-term plans for a sports car.

Imparato called the entry-level SUV a “cool car” and confirmed the company is currently considering designs for the model.

On a future GTV in the vein of a four-door coupé, Imparato said that so long as the inside is spacious, as electric architectures typically allow, the model is possible. “Next year, we will show a concept that is not very far from the GTV, with enough roominess to fit customer expectations, from 2025 to 2027,” he said. 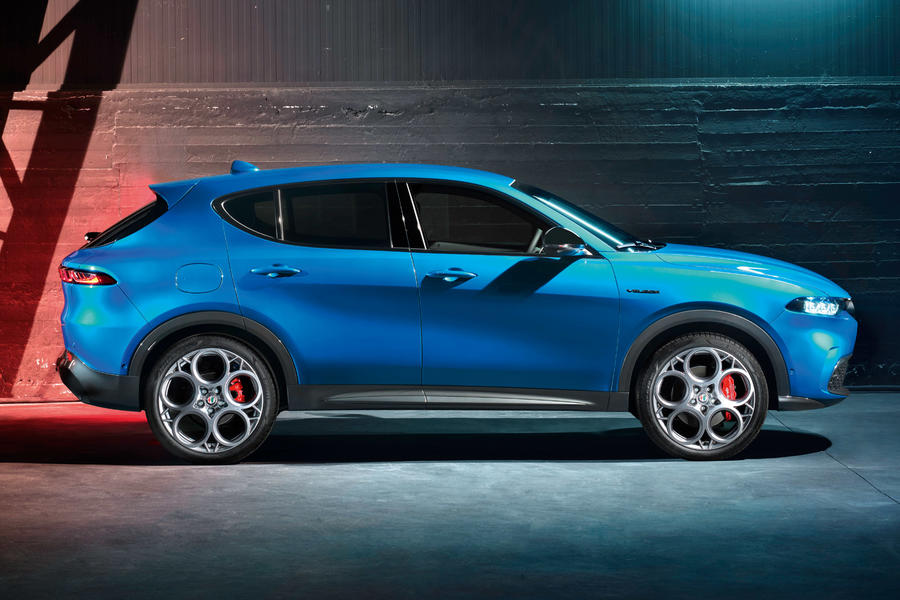 The Tonale, like the Stelvio, is named after a famous Italian mountain pass, albeit a lower one than that of its bigger SUV sibling.

It will be the final Alfa to sit on a platform developed by ex-parent company Fiat Chrysler Automobiles (FCA) – one that it shares with the Jeep Renegade – before future models move to Stellantis’s global platforms. Alfa confirmed the platform is set up for a fully electric Tonale if there is demand for it.

The Tonale sets a benchmark for the segment for driving dynamics, Alfa has claimed. It uses MacPherson suspension with frequency-selective damping, achieves 50:50 weight distribution and adopts a brake-by-wire system that promises “instantaneous response”, while the steering is said to be the most direct in the segment.

For now, the core Tonale range is made up of two electrified variants: a mild-hybrid powertrain with a choice of 128bhp or 158bhp and a plug-in hybrid. Alfa said electrification must serve “the brand and its DNA” while “reinventing sportiness for the 21st century”.

Both mild-hybrid variants use a four-cylinder 1.5-litre petrol engine paired with a seven-speed dual-clutch automatic gearbox and a 48V electric motor, which is active in start-up, low-speed driving and cruising in electric mode.

The most powerful model in the line-up is the plug-in hybrid, which pairs the Fiat 500’s 1.3-litre turbo petrol engine, giving traction to the front wheels, with an electric motor connected to the rears.

Using a 15.5kWh battery and delivering a total output of 271bhp, the set-up achieves 0-62mph in 6.2sec. The four-wheel-drive model offers between 37 and 50 miles of electric-only range, which, Imparato said, is crucial to ensure the Tonale can be considered as a fleet car. 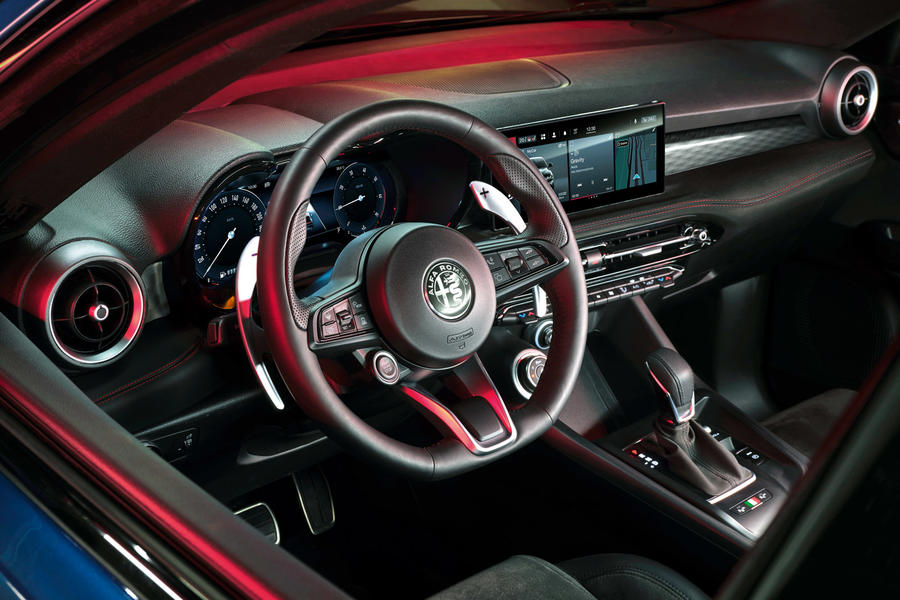 Imparato considers software to be at the forefront of Alfa’s reinvention – so much so that he delayed the launch of the Tonale to ensure that it was up to scratch.

The Tonale has all of the technology you would expect in a premium SUV: a digital 12.3in screen, plus a 10.25in touchscreen with a customisable home screen, Apple CarPlay and Android Auto compatibility, over-the-air updates and a host of driver assistance systems, including adaptive cruise control and traffic-jam assistance.

It’s also the first car in the world to have a non-fungible token (NFT), which links a car to a digital certificate based on blockchain technology. With the customer’s consent, it creates a confidential and non-modifiable record of the main stages of a car’s life, which acts as a guarantee that the car has been properly maintained, helping to improve residual value.

Other features include a built-in Amazon Alexa voice assistant and the ability for Amazon to deliver parcels directly to the car by the owner unlocking the car remotely.

The Tonale is intended for a “young, metropolitan and dynamic customer”, said Alfa, and features numerous nods to the brand’s heritage.

These include the so-called ‘GT Line’, which runs from the rear to the headlights, as seen on the 8C Competizione, and the 3+3 headlights, which reflect those of the 1989 SZ. The front also features the iconic ‘Trilobo’ nose and distinctive ‘Scudetto’ shield. The alloy wheels are a modern take on the telephone-dial design that began in the 1960s on models such as the 33 Stradale.

The Tonale, which will arrive in the UK this autumn, will have just two trims, Super and Ti, with each offering an optional pack, the Sprint and Veloce respectively.

Alfa has also introduced a five-year warranty for its cars. 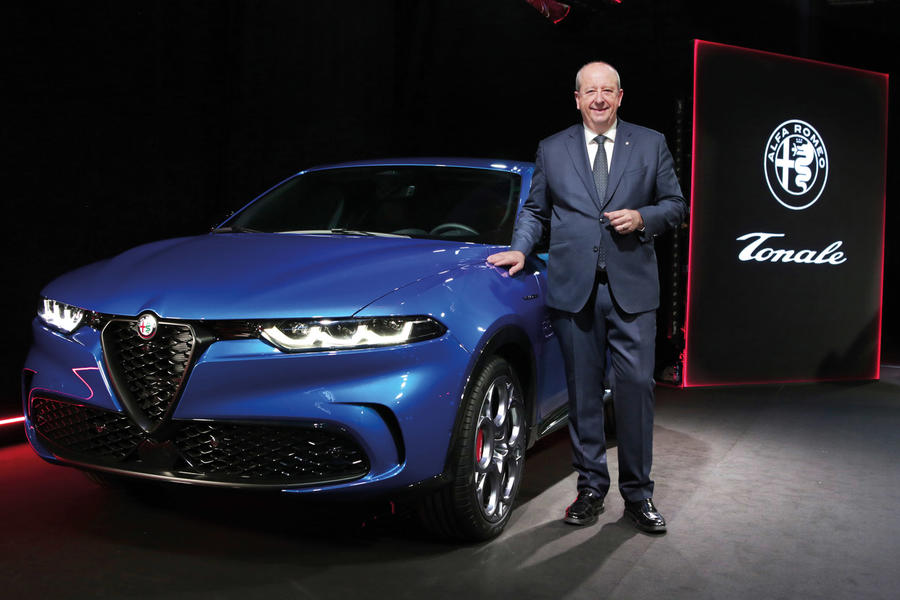 What are the Tonale’s highlights?

“Since I joined in January 2021, I’ve been obsessed with three key points for the Tonale: Alfa Romeo DNA, software and electrification. I will never disrespect Alfa Romeo design or the job done by our predecessors. You have to inject some points of reference in the cars from the fantastic history we have.”

Why is software important?

“I wanted to send a message that, even at Alfa, we’re talking about the future. From now, Alfa will always be in the top quartile for technology content in its cars. We must have the latest level of services, advanced driver assistance systems. You must be able to receive your Amazon delivery in your car. And it must be easy.”

This is Alfa’s first step into electrification. What has been your approach?

“If we’re not electrified, we’re dead. So it’s obvious we wanted to do it, but we also wanted to maintain the Alfa Romeo touch and feel. That’s why we’re jumping in with 48V so you can really feel something in terms of zero-emissions. Then, with the plug-in hybrid, I wanted power obviously but also between 60km and 80km [37-50 miles] of electric range. That means we’re back in the race for fleet business. It’s key for the UK, Germany, France and soon Italy.”

What are your sales expectations for the Tonale?

“The deal I made with [Stellantis CEO] Carlos Tavares was firstly to focus on quality – which is why I delayed the car by three months – and secondly pricing power and margin per unit, disregarding anything about volumes. That’s why I don’t have volume targets.

“I’ve said 20,000 units in the second half in order to cover my break-even point. I can double that or I can stay at that, because I don’t have any pressure to absorb fixed costs. I want 80% of cars to be built to order. I don’t want to see cars in a car park and I won’t spend time on discounts. It’s about protecting the quality and the value.”

Overall much easier on the eye than the fussily styled multi-creased Stevio.

There is an easy unforced simplicity and purposefulness that recalls the Alfasud. Can see this selling well.

All recent Alfas try to hard to impress in its styling. This one looks much more relaxed and all the better for it.