BACK TO ALL NEWS
Currently reading: 2023 Mercedes-AMG GT to be crowned by 831bhp plug-in hybrid
UP NEXT
New Volkswagen CEO Schafer to make brand "loved" again

Mercedes-Benz’s AMG performance division will launch the second-generation GT in 2023, heavily redesigning and re-engineering the two-door flagship to take on the Porsche 911.

The new model, known under the internal codename C192, has been twinned with the recently introduced seventh-generation Mercedes-AMG SL. However, it will be produced exclusively in coupé form, leaving the open-top duties to its SL sibling, which now also wears an AMG, rather than a Benz, badge because the performance division took over the engineering programmes for the sporting duo.

Stylistically, the new GT takes on an evolutionary appearance, with familiar long-bonnet and short-tail proportions. As with the first-generation model, introduced in 2015, it receives a large liftback-style tailgate. 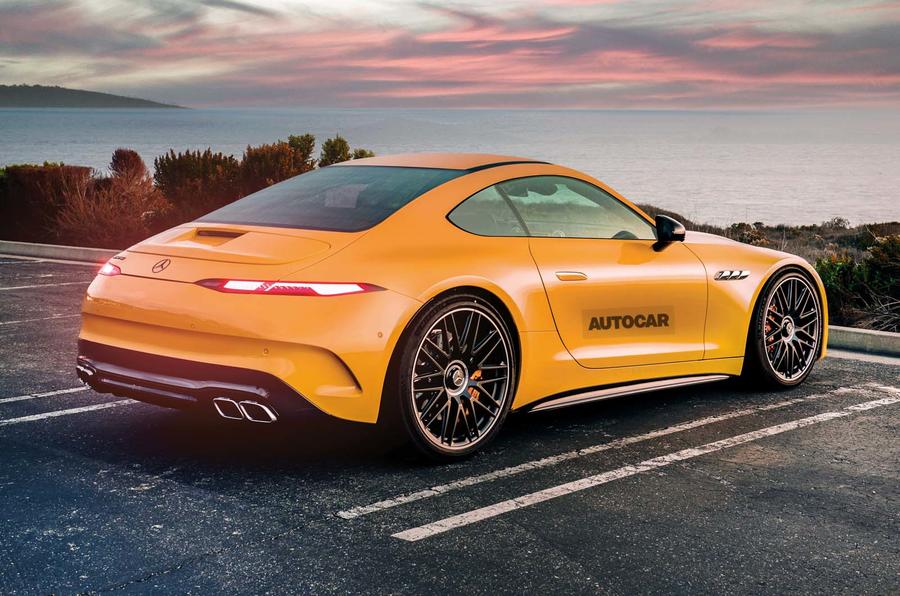 Active aerodynamics have played a central role in the development of the new GT, which receives the same front underbody spoiler as the SL. It extends downwards by around 40mm at a speed of 62mph to create a Venturi effect underneath the car, eventually reducing front axle lift by a claimed 50kg at 155mph. At the rear, meanwhile, a wing deploys and tilts in five different stages to increase downforce at speeds above 50mph.

As with the latest SL, the new GT has been developed and engineered in a programme led by AMG but with key input from other Mercedes-Benz divisions. These include the High Performance Powertrain division headquartered in Brixworth, which was also responsible for engineering the Formula 1-derived powertrain in the highly strung Mercedes-AMG One road car, revealed belatedly this year.

Affalterbach headquarters in Germany have revealed that the company’s 4.0-litre V8 petrol engine, codenamed M178, will feature from the start of second-generation GT sales in 2023 with dry-sump lubrication. Hand-assembled on site, the twin-turbocharged unit is expected to offer a similar output as in the SL, with 469bhp in a new GT 53 model and 577bhp in a successor to the GT 63. 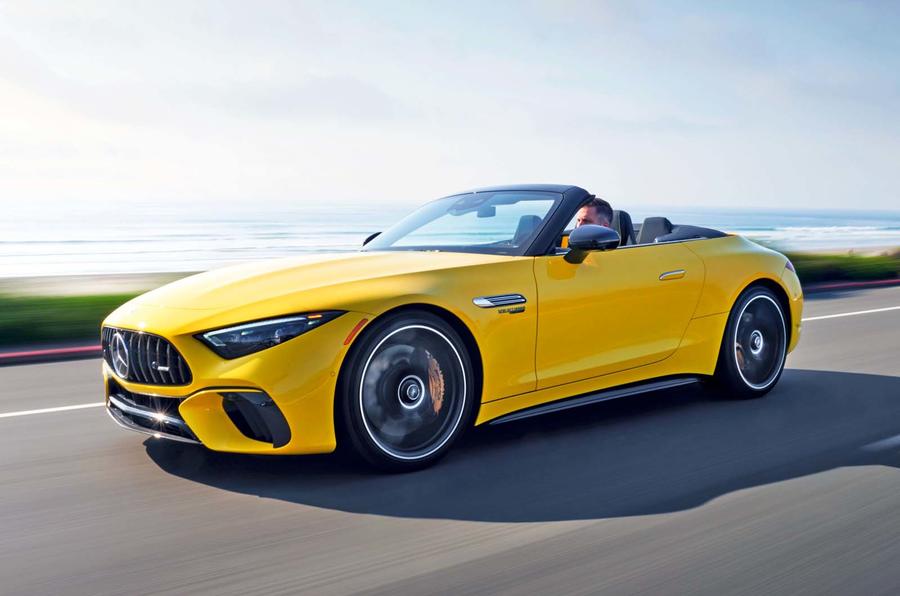 Further models will be added during the new coupé’s life cycle, including more powerful follow-ups to the GT R, GT GT3 and range-topping GT Black Series.

Most intriguingly, AMG is also working on a new GT 63 S E-Performance model running the same petrol-electric plug-in hybrid drivetrain as the recently introduced GT 63 S E-Performance 4-Door Coupé. It mates the GT 63’s V8 engine with an electric motor mounted on the rear axle to develop a combined 831bhp and up to 1084lb ft on overboost. If replicated in the GT, that would make this one of the most powerful hybrid coupés on sale in outright terms, eclipsing even the 819bhp Ferrari 296 GTB and the limited-run, 808bhp Lamborghini Sián.

At this stage, it is not known whether the two-door plug-in hybrid GT will receive the same 6.1kWh battery and corresponding 7.5-mile electric range as its four-door sibling, although an increase in the wheelbase is claimed to have improved packaging. 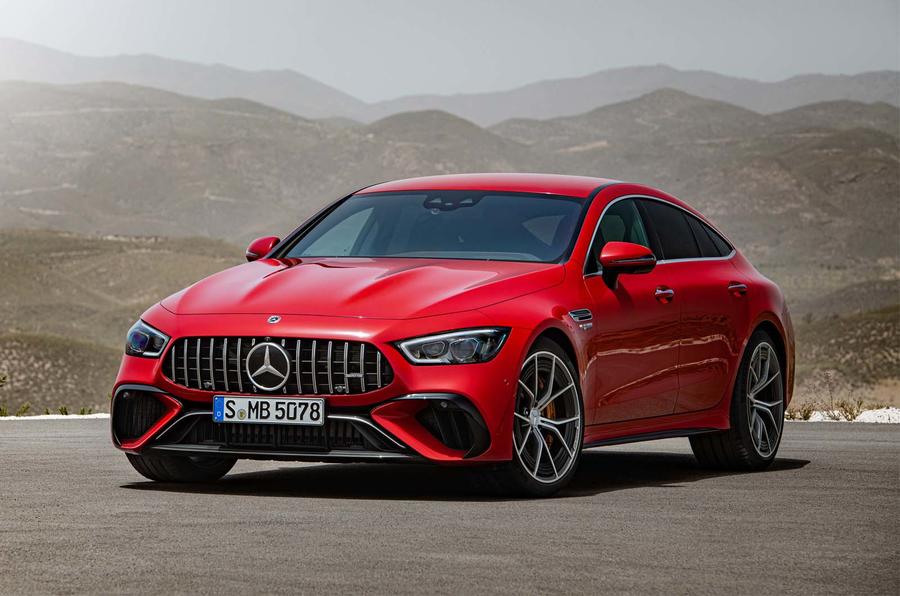 As with the SL, the GT has been conceived to accommodate both inline four- and six-cylinder engines. Among them is the M139 four-cylinder 2.0-litre unit, which features in the new SL 43 with a 48V mild-hybrid system and electric turbocharger, producing 375bhp and 354lb ft of torque.

The new GT will feature a nine-speed Speedshift gearbox with a wet clutch, developed and produced in-house, in place of the Magna seven-speed dual-clutch transaxle fitted to the original GT. Launch models will also have 4Matic+ four-wheel drive.

The new coupé is based on the same Modular Sport Architecture structure used by the open-top SL but with changes to accommodate a fixed roof and the GT’s liftback tailgate. Longitudinal, torsional and transverse rigidity have all been increased, according to those involved in the new car’s development. 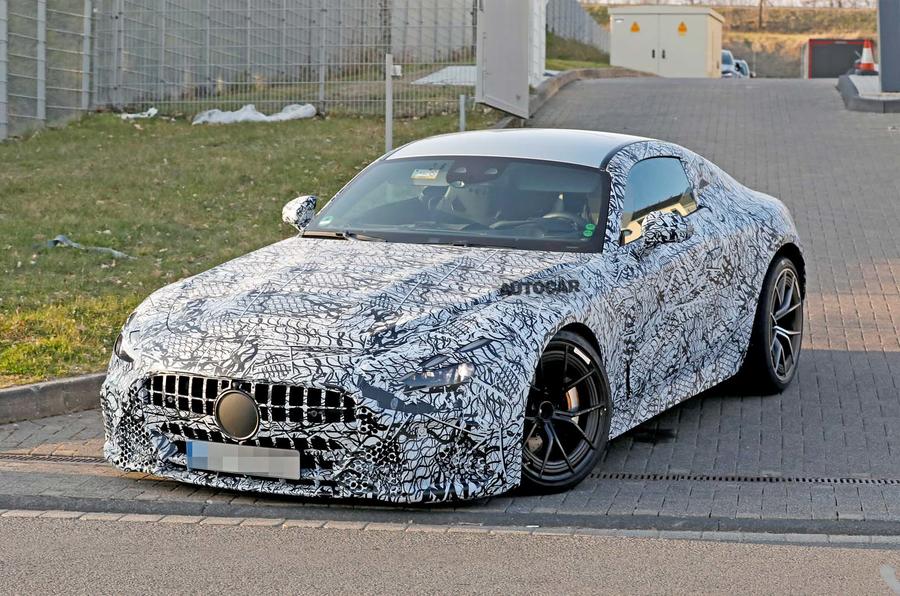 AMG has also created new chassis mounts in a bid to improve NVH properties and the road surface sensitivity of the original model.

Key among the changes to the new performance coupé is an abandoning of the rear transaxle, a layout first employed with the SLS and continued through to the first-generation GT. Instead, the new GT’s engine and gearbox are mated up front in a move aimed at freeing up space for a fully variable 4Matic+ four-wheel drive system and rear-wheel steering, as seen on the SL.

Despite the change, the new model’s front-to-rear weight distribution is claimed not to vary much from the outgoing GT’s 47:53 figure. 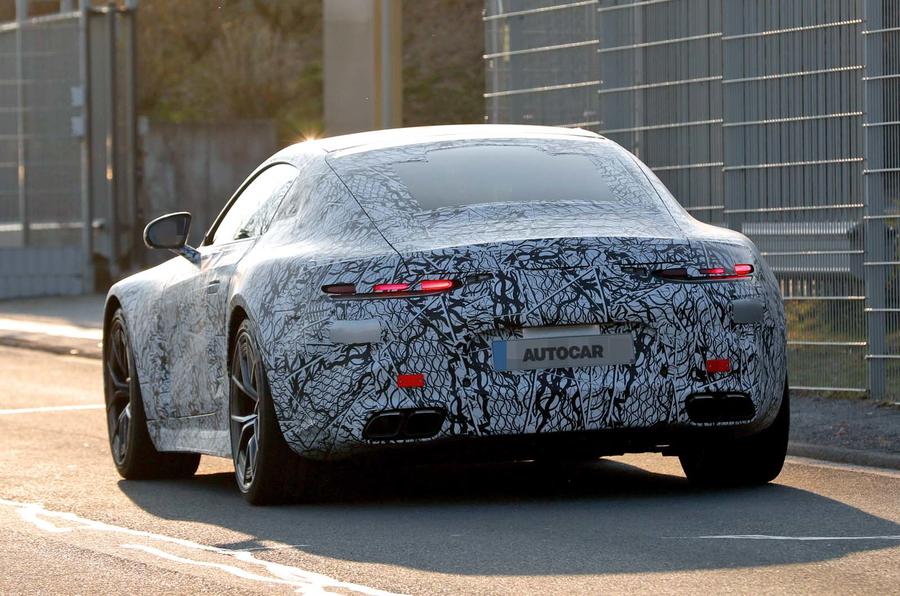 Underneath, newly developed Active Roll Control suspension uses a combination of double wishbones up front and a multi-link arrangement at the rear, with steel springs, variable damping and hydraulically operated roll bars. Once again, it is the same set-up used by the SL but with altered elastokinematic properties and tuning to give the GT “a distinctly different driving character”.

Inside, the GT is expected to feature largely the same 2+2 interior as the SL, albeit with detailed changes in trim to reflect its more overtly sporting positioning.

As AMG’s C63 and E63 supersaloons – and their closely related SUV counterparts – gear up to swap their roaring V8s for electrified 2.0-litre four-pots in their next iterations and the firm’s One halo hypercar heads to production with a Formula 1-derived hybrid V6, it is clear that the days of Affalterbach-fettled eight-cylinder engines are numbered.

The firm’s current 4.0-litre V8 is still used in the GT 4-Door Coupé, the SL roadster and AMG-badged versions of the Mercedes G-Class and Mercedes GLS SUVs – but the next GT and an upcoming hybrid range-topper for the Mercedes S-Class, both due in 2023, look set to be among the last new cars to use the engine.

So nearly four decades since the launch of the division’s first official road-going creation, here are some of its loudest and proudest V8 efforts: 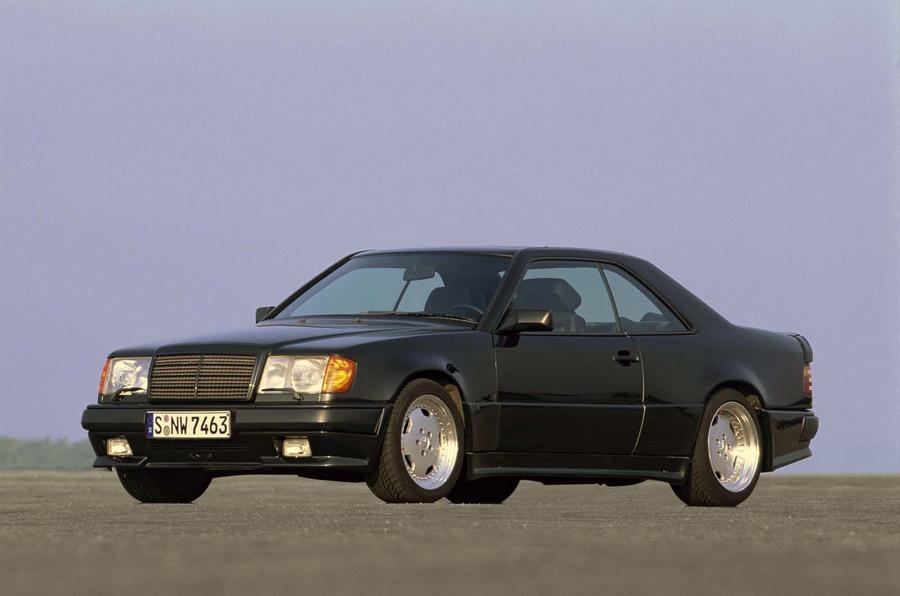 The model that set the mould for AMG’s future, this pioneering super-saloon – loosely based on the hugely popular W124 230E – came in response to the contemporary BMW M5. Its most potent engine was a highly modified 6.0-litre V8 and had enough grunt to get the Hammer from 0-62mph in just 5.0sec – almost as quick as a Lamborghini Countach. 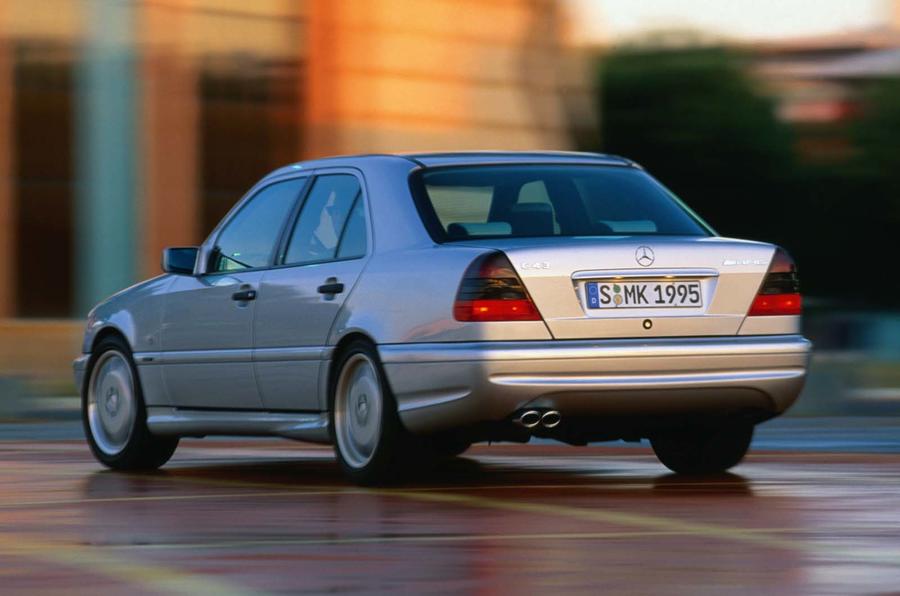 The first AMG model to be produced alongside the Mercedes-Benz on which it was based – in this case the W202-gen C-Class – following the manufacturer’s acquisition of the tuning house. It packed 306bhp and 302lb ft courtesy of a fettled 4.3-litre V8 and could be had as a saloon or an estate. 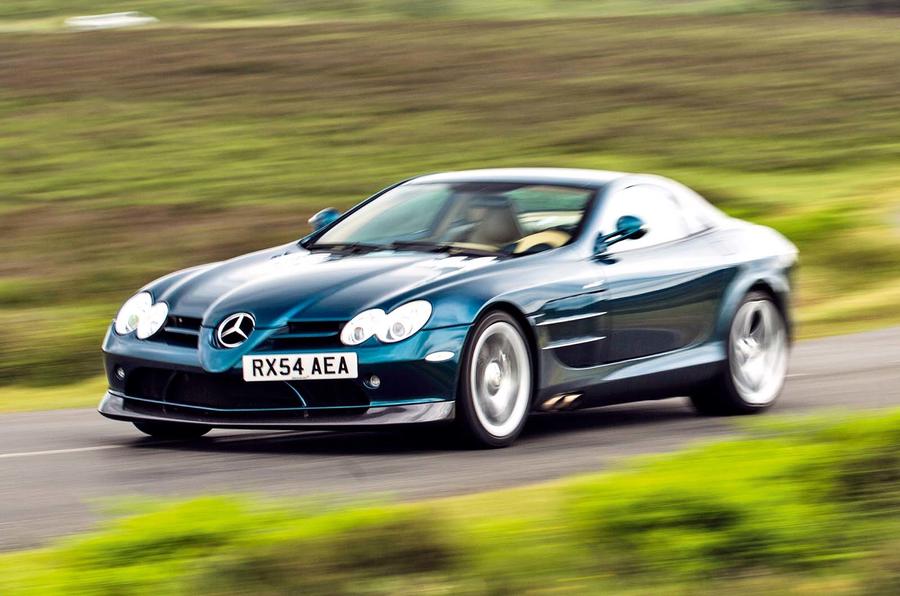 The SLR is what results when two of the biggest names in motorsport collaborate on a road-going supercar. Designed by Gordon Murray and built in England by McLaren but with more than 600bhp supplied by AMG’s supercharged 5.0-litre V8, this long-nosed brute came to be one of the defining performance cars of its era. 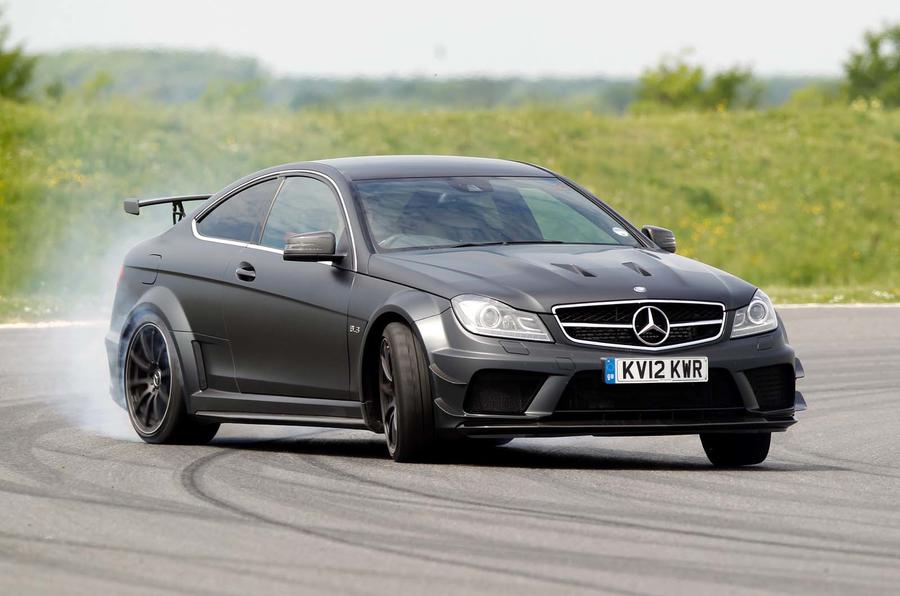 The fourth in a line of hardcore Black Series cars, this almost unrecognisable take on the C-Class was deemed “a technical and tactical triumph” by our testers, not only because of the unforgettable way it approached corners but also because of the malleable character of its 5.5-litre twin-turbo V8.

Log in or register to post comments
GBM 29 July 2022
So the new GT is just an SL with a tin top? I'm a big fan of the current GT but it seems MB can't justify the R&D of two of its more iconic models because the world just wants SUVs instead. What an indictment.
Peter Cavellini 29 July 2022

And how long before how fast doesn't matter?, by that I mean once we've gotten used to EV cars, and the glacial decline of ICE cars, will 200,300mph road cars relevant? in the future it's how far, you'll know when your estimated to arrive, and a delay occurs you'll be rerouted, you'll get there get out the car will go Park itself etc, yep, enjoy Cars like this while there relevant.