BACK TO ALL NEWS
Currently reading: New 2020 Volkswagen Golf R estate spotted for the first time
UP NEXT
PSA Group opens flagship Citroen, DS and Peugeot site in London

Undisguised prototypes of the new Golf R, tipped for an unveiling before the end of 2020, have already revealed the hot hatchback's production styling, but we've now had our first glimpse of the estate variant.

The prototype appears to be masquerading as the off-road-inspired Alltrack version of the new Golf, but it gives itself away as the top-rung performance model with its large wheels and low-profile tyres, blue brake calipers, prominent air intakes and rear spoiler. Another clue to its true identity is the quad-exit exhaust system, which matches that of the previously spotted Golf R test mules.

A prototype of the hatchback was photographed up close earlier this year, giving us a view of the interior. It shows the new model sticks to the formula of its predecessor, with understated performance the order of the day. The view inside shows that there will be R-branded sports seats to mark out the cabin, but otherwise it'll be familiar Golf Mk8 fare.

Although not yet confirmed, power outputs for all of the hot Mk8 Golf variants (the GTI, GTI TCR, GTD and R) leaked out earlier this year via a slideshow from a brand presentation. 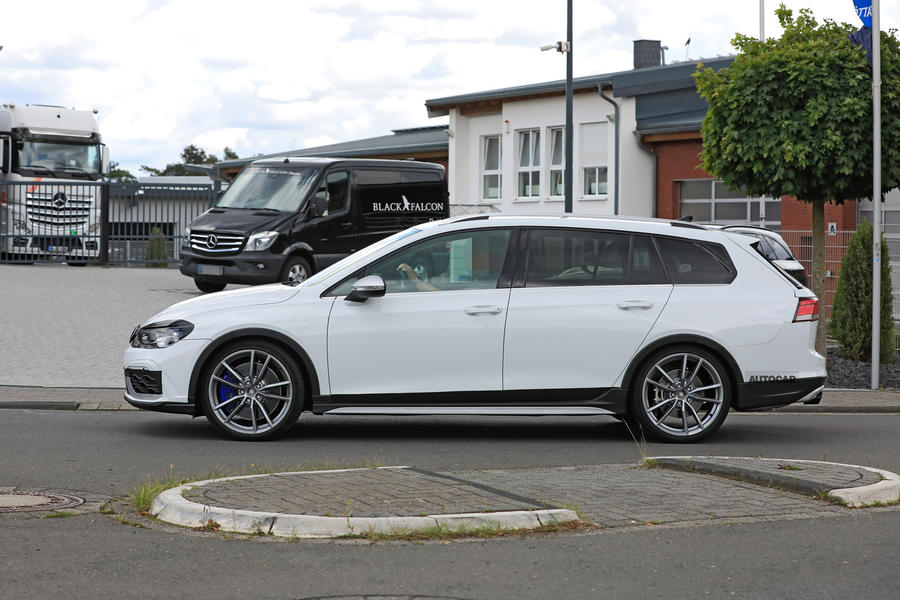 The slide revealed that the R will put out 329bhp - a 33bhp increase - from a heavily boosted version of the EA888 turbocharged 2.0-litre petrol motor, as featured in the new Tiguan R and Arteon R. As before, this will be put through a Haldex-based four-wheel drive system and seven-speed dual-clutch automatic gearbox, while a new torque vectoring system is expected to be introduced. A manual gearbox isn't expected to be offered.

Although it's not official yet, Autocar understands that the 2020 Golf R had been planned for an unveiling at the Goodwood Festival of Speed in the UK, which had originally been rescheduled from July to September but has now been cancelled entirely. It's not yet clear precisely when VW will reveal the model, although insiders suggest it could be in late summer or early autumn.

It's also not yet clear if a long-rumoured flagship Golf R Plus, expected to produce as much as 400bhp, will be saved for a debut next year or even later.

As different as one tennis

As different as one tennis ball is from the next.

12 February 2020
You'd have to be an obsessive conformist without a shred of creativity or individuality, and no respect or care for engineering integrity (vis-a-vs cheating, unreliability, etc) to think this is a viable, let alone preferred, option.

Deja Vu, I've just been in this place before

I'm sure the numbers will be higher to make you think you're getting some kinda improvement over the old one. Maybe +15Hp if you're lucky.

It looks like the designers have pulled off vehicle fraud, by doing a cut-and-shut.   Those extra doors do not work and the front-end design looks dated.

11 February 2020
That is one ungainly front end. The Mk.7 R looks fantastic, this is a very unfortunate thing indeed.

I'm sure its very capable,

I'm sure its very capable, but, as a five door only, you can never get away from the family car look.

Is that a Seat Leon from the rear?, and, that front Bumper!?, what were they thinking?, is VW using SEAT parts now?

Agreed it has too many doors.

Agreed it has too many doors. It also has the wrong gearbox, and its been hit with the ugly stick. It will sell well to those who bought the MK7.

Not much of an Autocar scoop...

...the same pictures appear on the websites of several other UK car magazines.

13 February 2020
Damn those headlights ruin anything that could be attractive. So frumpy looking up front. Shame