BACK TO ALL NEWS
Currently reading: 2021 Genesis G80 arrives with 375bhp turbo V6 option
UP NEXT
New 2022 Porsche Cayenne to bring design overhaul

Hyundai’s luxury arm Genesis has revealed the new third-generation version of its flagship G80 saloon, which is claimed to offer significant performance and technology upgrades over its predecessor.

Sitting atop an all-new, bespoke rear-wheel-drive platform, the Lexus ES rival retains the long wheelbase, short overhangs and rakish, coupé-style roofline of the previous model, but bears the results of a subtle styling overhaul influenced by the brand’s GV80 SUV.

At the front, a large, shield-shaped grille is flanked by a pair of distinctive split-cluster headlights, while the previous car’s small air intakes, positioned under each headlight, have made way for an extended lower grille that spans the width of the car.

The brand claims the new car’s window line, which slopes more obviously towards the rear of the car than that of the outgoing G80, is inspired by iconic classic cars. A full-length chrome strip is said to strengthen ‘forward visual motion’, in the same way as various styling cues featured on parent company Hyundai’s new Prophecy concept.

Larger 20in alloy wheels, dual shield-shaped exhaust tips and a prominent rear spoiler indicate the car’s performance potential, which is delivered by a choice of two turbocharged petrol engines or a 2.2-litre diesel four-cylinder, which can each be specified with rear- or all-wheel-drive.

The most potent option, a 3.5-litre turbo V6, sends 375bhp and 391lb ft - significantly more than the outgoing car’s 3.8-litre unit - to the wheels by way of an eight-speed automatic gearbox which is standard to all models. The mid-range 2.5-litre turbo four-cylinder produces 296bhp and 311lb ft, while the diesel option puts out 207bhp and 325lb ft.

Inside, the new G80 offers improved rear legroom and headroom, courtesy of a lowered rear bench which also allows for a more heavily raked roofline. The dashboard is dominated by a 14.5in infotainment touchscreen; Genesis says minimal use of physical buttons and switches improves the interior’s appearance and enhances ease-of-use. 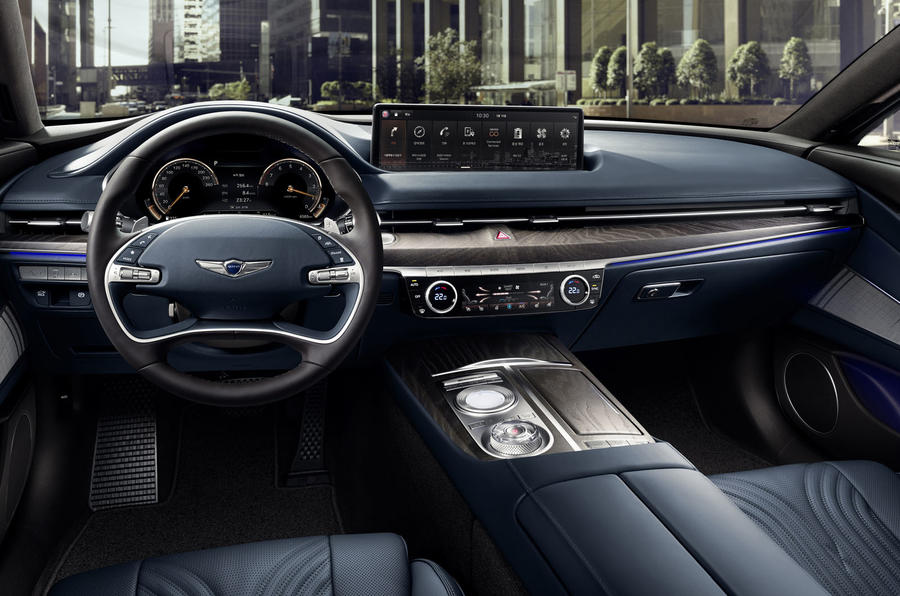 The G80’s new platform, aside from allowing for improved interior space, also lowers the body and centre of gravity for improved driving stability. It also weighs 125kg less than its predecessor, with aluminium used for around 19% of the body components.

Safety functions featured as standard to all models include motorway driving assist, intelligent cruise control, collision avoidance assist, blind spot monitor and pre-active safety seats which automatically pull the passengers’ seat back forwards in the event of an accident to minimise injury.

In the South Korean market, the G80 will feature an in-car payment device which will also allow drivers to pay for things like tolls and fuel without leaving the vehicle.

Launching initially in the brand’s home market of South Korea, the new G80 will arrive in other global markets, including North America and Russia, in the second half of this year. Genesis boss Manfred Fitzgerald previously told Autocar that the brand was plotting a UK launch in 2020, though this is likely to be pushed back as a result of the coronavirus outbreak.

When Genesis does arrive in the UK, it is unlikely to bring the G80, as demand for large luxury saloons is not as strong here as it is in the US and the Middle East. Hyundai managed to sell just 50 examples of the original Genesis saloon in the two years it was on sale here.

Hyundai i30 gets redesign, new tech and mild hybrids for 2020​

Hyundai managed to sell just 50 examples of the original Genesis saloon in two years because it was never marketed or advertised, and sold out of just 5 dealers. Hyundai even stated in a press release they didn't expect to sell more than 60. Hyundai will aim this car at the markets that are more progressive and alive, instead of the British market that remain backward and dull, and being conned by the overpriced, unrelible cars form the German manufaucturers. If you bothered to read the American press and reviews, they rave about the Genesis, because the car is just that good. I hope they do sell the new Genesis here. After 5 years experience with my present Genesis, I can't wait to get behind the wheel of the new model. And the price will make the car fantastic value as well. Autocar's review of the 2014 model was to say the car was mediocre and nothing inspiriring. There have been dozens of reviews in the USA (check Youtube) stating how great the car was/is. The car also came top in the USA in JD Power and Consumer.org reviews, two of the biggest in the states. And this is a market which can be very harsh if a car deserves it. I wish the British mentality would wake up and see how we are going into decline when other parts of the world are soaring ahead.

Virtually every single comment I've read on the g80 on English-language news sites from the US and others as well as on many European ones has been full of praise for the beauty and elegance of its design, and yet here we are with a bunch of squealy whingers on autocar throwing a hissy fit on how awful it looks. How could I have possibly guessed lol.

Bet these are the same people who think the S Korean response to covid-19 has been s**t compared to the UK's.

Just give it up

If this was a new Audi or Beemer you would be cursing it to hell. It's actually incredible refreshing. I say Jaguar, take note!
View all comments (8)