The facelifted Kia Stonic crossover, which gains a raft of fuel-saving, driver-assistance and infotainment upgrades for 2020, has gone on sale priced from £18,195.

For the first time, the Stonic is available in GT Line and GT Line S trims in addition to 2 and Connect. GT Line S, at the top of the range, is priced from £22,245 and brings a colour-coded rear spoiler, bespoke 17in alloy wheels and a choice of six two-tone colour schemes.

A new ‘EcoDynamics+’ mild-hybrid petrol powertrain pairs a 1.0-litre turbocharged three-cylinder petrol with a 48V lithium ion battery and belt-integrated starter-generator (BISG). Energy is recuperated under deceleration to supplement the torque output of the combustion engine and extend ‘engine-off’ time when coasting.

It is available with 99bhp or 118bhp, and the higher-powered version’s maximum 148lb ft torque output is 16% higher than that of the current, non-electrified 1.0-litre option.

The EcoDynamics+ motor can also be paired with a six-speed manual gearbox and Kia’s new ‘clutch-by-wire’ system. Swapping a mechanical linkage for an electronic actuator, the system allows the engine to shut off sooner when coasting to a stop, reducing emissions and saving fuel.

Elsewhere, the Stonic’s existing petrol engines have received “major revisions” in the name of efficiency. On offer are a 99bhp 1.0-litre turbo petrol and a naturally aspirated 1.2-litre with 83bhp, while the five-speed manual gearbox option has been replaced by a six-speed. 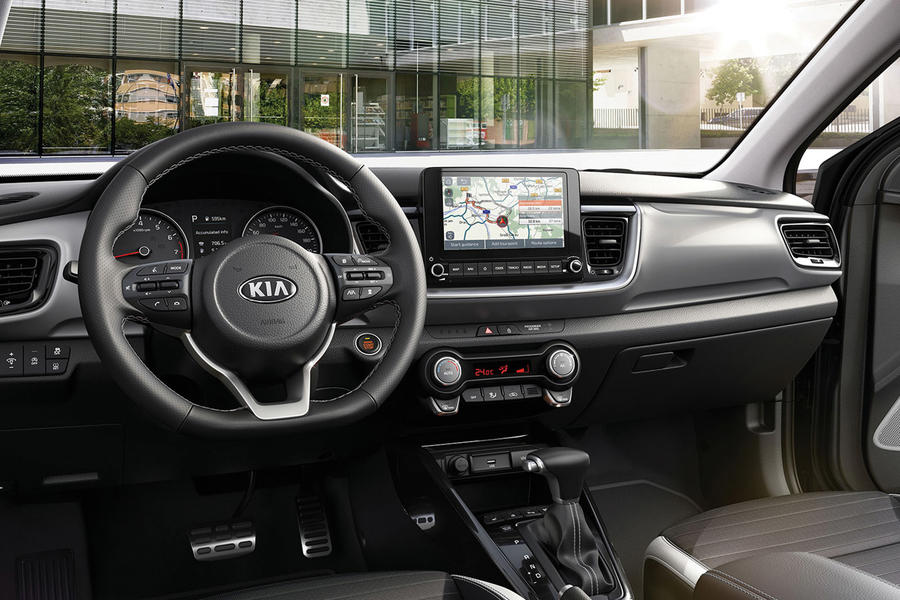 The cabin gains a larger 8.0in central touchscreen and smartphone connectivity as standard, and Kia has rolled out its latest live telematics functionality. The resolution of the 4.2in digital display cluster has been upgraded, while new interior customisation options include new blue and yellow trim highlights.

A new ‘User Profile Transfer’ function allows drivers to save their preferred system settings to the cloud and transfer them to other Kia models equipped with the system. The brand says this will be of particular use to fleet drivers who often switch between vehicles or families with more than one Kia model in their household.

The crossover’s exterior design remains largely unchanged, save for the addition of new LED headlights, but buyers can choose from an expanded range of nine colour choices - including new grey and blue options - and can specify a new 16in alloy wheel design.

Kia's Rio-based SUV is short on personality and interior finesse, but the Stonic is one of the better-handling small SUVs out there

A contrasting roof remains an option, and Kia says 20 two-tone colour combinations are now available. Of the 154,659 examples sold since the Stonic was launched in 2017, 33% have been painted this way.

The new Stonic will arrive in dealerships later this year, with customer deliveries to follow shortly after.

Mild facelift / mild hybrid fiddle (a benefit to the manufacturer to meet emissions targets to avoid fines but no benefit to customer) = huge price rise (see all other manufacturers doing this recently for other examples of this con).

To the private buyer

To be honest without knowing the additonal cost of the 99bhp mild hybrid against it's 99bhp pure ICE version it's also impossible to make a good comparision.

How mild is mild?

I do wish manufacturers and reporters would specify how powerful some of these mild hybrids are and how big the accompanying batteries are. Currently we have very mild 12 volt hybrid systems (little more than powered alternators), less mild 48 volt systems and also high voltage "full hybrid" systems exemplified by Honda and Toyota.

The effectiveness of these systems is largely governed by the power of the electric motor (in kW) and the capacity of the battery (in kWh), so it is essential to know these values - just as it is to know the power and torque of an internal combustion engine.

At least Kia reveal that the torque figure is bolstered by 16%, but without the electric power and energy figures it's impossible to make good comparisons.