BMW’s upcoming M3, spied without camouflage, will weigh less, be more rigid and have more power than outgoing model
Close

The next-generation BMW M3 – due for launch in 2020 – appears to have been photographed undisguised for the first time, according to an image posted to Facebook by BMW tuning specialist Evolve Automotive.

The car photographed looks to be on the assembly line and the image reveals previously unconfirmed elements of the model's design. Key changes over the standard 3 Series include the addition of a subtle rear spoiler, extended wheel arches, black plastic rear trim and reshaped bootlid. Four large exhaust pipes also feature and will be housed in a downforce-enhancing rear diffuser, which appears to not yet have been installed.

The hotly anticipated performance saloon is expected to use an extensively updated version of BMW’s twin-scroll turbocharged 3.0-litre straight-six engine, producing around 500bhp.

Officials at the 2018 Paris motor show, including company boss Harald Krüger, confirmed that a new M3 was under development, although they declined to give details. It is understood, however, that engineers have been set the target of giving the new M3 a power boost over the M3 CS, which produced 454bhp.

It is believed that the additional performance is likely to come from the use of a water injection system, like that used by the M4 GTS, to enable reduced cylinder temperatures for more efficient running. The only obstacle to this system being employed is believed to have centred on the issue of effective packaging, but that has now thought to have been overcome.

The additional weight of the water injection system is minimal and unlikely to compromise BMW’s goal of making the car lighter than the 1585kg M3 CS. This is thanks to the savings already made by the basic structure of the new 3 Series, as well as the potential benefits of using carbonfibre parts, including the roof.

The use of a four-wheel drive system similar to that used on the M5, and any form of electrification is believed to have been vetoed because they would add too much weight, complexity and cost. However, persistent reports suggest that the 2020 M3 could be the final M model to be launched without some form of electrification; something made necessary by the increasing priority of meeting fleet-average CO2 targets. 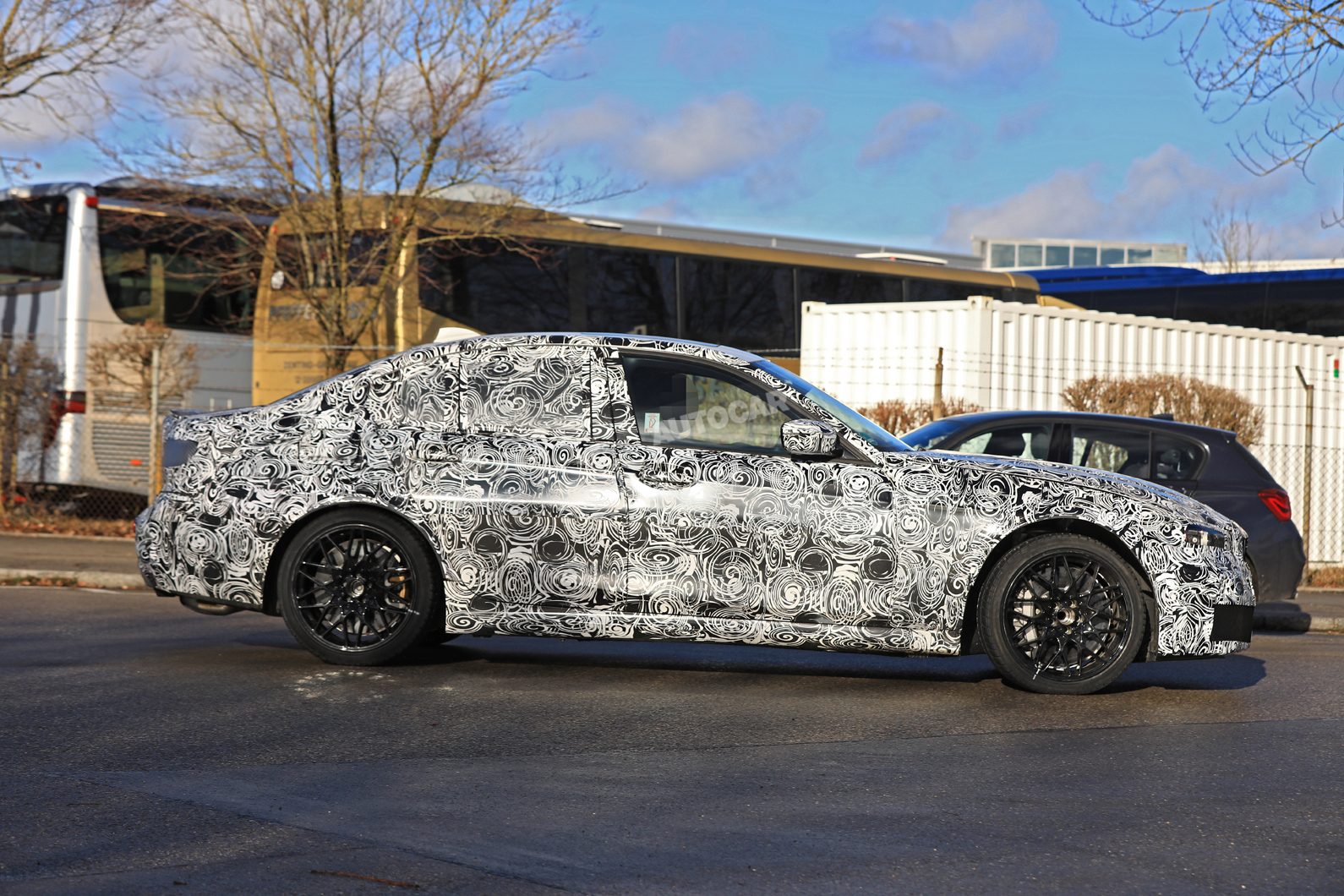 There are no further details about the new M3’s potential performance, but the lighter, more powerful car will eclipse the current M3 CS’s 0-62mph time of 3.9sec. It will be sold with a choice of a six-speed manual gearbox or an optional eight-speed automatic, but the auto will enable better performance figures thanks to a built-in electronic launch control system.

The M3 will also benefit from the increased rigidity offered by its part-aluminium, part-high-strength steel CLAR underpinnings. This is a key reason behind BMW already making class-leading claims about the dynamic abilities of the base 3 Series. The regular car’s wider track and uprated suspension systems should also give engineers the foundations for a more dynamically capable M3.

As well as offering greater performance potential, the stiffer chassis should reduce the amount of vibration transmitted into the car to enhance overall refinement. It should also allow engineers to adopt softer spring rates to give the M3 a more compliant ride in its most comfortable mode, without hampering the car’s overall dynamic ability.

Inside, the next M3 will follow in the M5's footsteps by swapping its dashtop infotainment screen for one that’s more tidily integrated into the dashboard. The iDrive system is expected to retain a rotary control knob because it has been praised for its ease of use in current cars. The M3 will also gain significantly more advanced driver assist features, but former sales and marketing boss Ian Robertson has hinted to Autocar that most BMW models will steer clear of the full autonomous hardware suites to be used on i5 and i7 due from 2021. M models, in particular, will still possess a very driver-centric character.

The M3 will continue to form the basis for the technically identical M4 coupé, while M-worked 3 Series models will lend their hardware to a two-door M440i M Performance coupé and M440d M Performance coupé. These models are also due to arrive in showrooms in 2020 and are part of a 26-model onslaught of M division-tuned cars that aims to more extensively rival the growing ranges of Mercedes-AMG and Audi Sport. 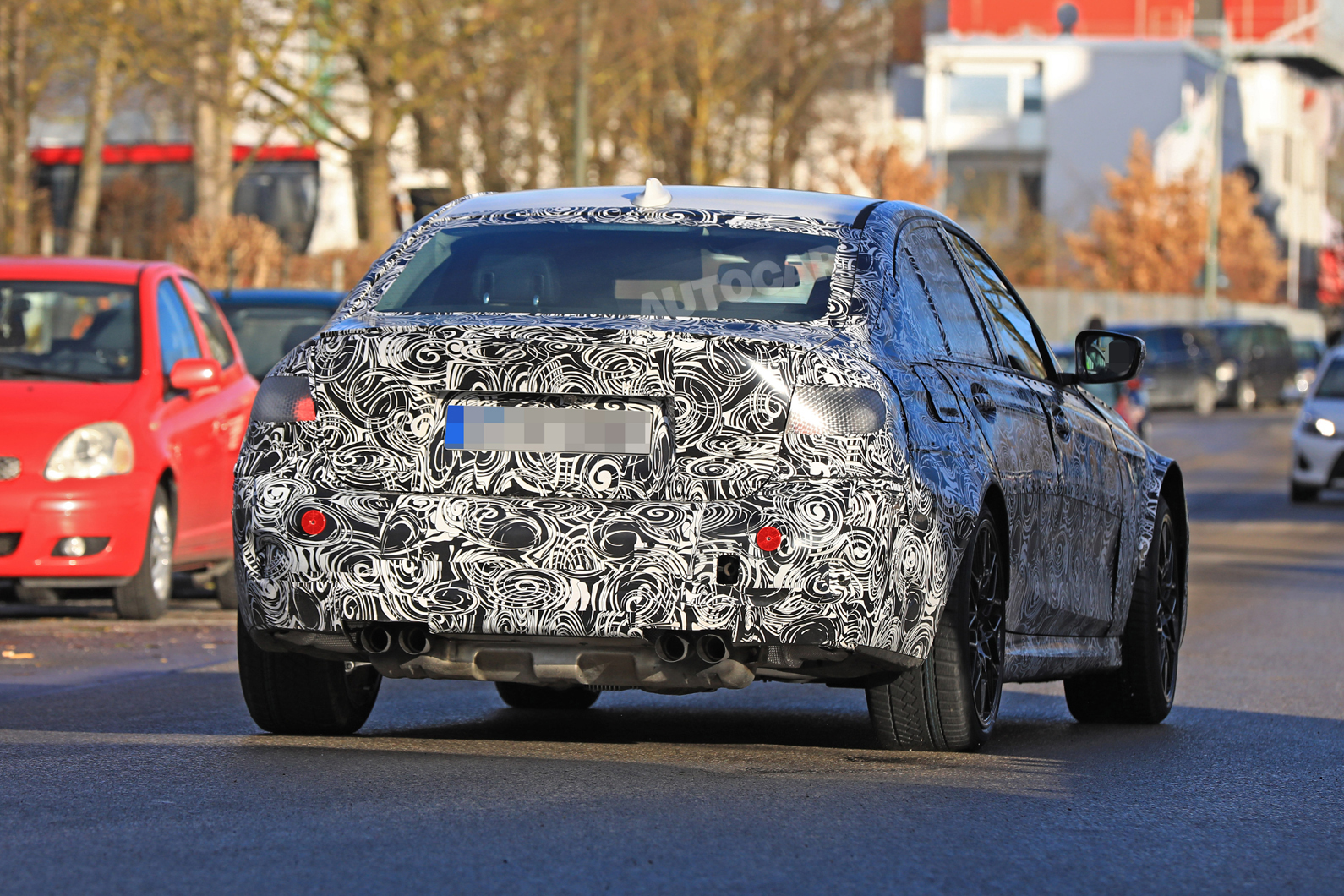 It remains uncertain whether the car will feature an active rear-wheel steering system to enhance agility and boost high-speed stability. Although it is under consideration, the business case for developing the system for the M3 only is believed to be under debate.

The car, now testing on public roads in development form and due to go on sale in 2020, would inherit its active steering technology from the 5 Series and 7 Series. If the hardware does make the cut and is fitted to the super-saloon, the M3 would be the only car in the upcoming 3 Series range to feature it.

Alfa are far more reliable than their reputation suggests and its a better drivers car, with harder plastics, so if I was able to by a "super Saloon", I'd go for the Alfa

This quote! I couldnt agree more! and the iphone generation are just lapping it up

I hate to rain on your little anti BMW parade, but faults are not exclusive to BMW. They can and do happen to every brand.

Grow up and give it a rest already.

You have B58 engine.    Quickest of searches and here's what you find:

(Read that back to yourself - cranshaft guide bearing wearing out requiring a new engine!).

Correct if I’m wrong, but this is old News, I never had one bit of bother with my 04’ plate one, ran sweet as a Nut.

Can't you just restrict yourself to writing letters to BMW in private with your little tin hat on? Would save boring us to tears on every single BMW thread. Can't you see you're one of those bitter old men?