BACK TO ALL NEWS
Currently reading: New Audi A6 guns for 5 Series with mild-hybrid power and A8 cabin tech
UP NEXT
First drive: 2022 BMW XM prototype

All-hybrid line-up, clever infotainment and Level 3 autonomy all feature in the new A6
Open gallery
Close

Audi believes its all-new A6 saloon is finally the car to usurp the BMW 5 Series as champion of the ultra-competitive executive saloon class, thanks to its complete reinvention inside and out, with a new look, fresh technology and a bolstering of its sporting appeal.

The eighth-generation A6, on show in Geneva before sales kick-off in June, will be available with mild-hybrid engines only – much like the recently launched A7 – and will later offer a plug-in hybrid as “bridge technology” to pure electric.

For now, the new executive saloon will be offered with four engine options: a V6 3.0-litre TFSI petrol and three diesels, a 2.0-litre TDI and a 3.0-litre TDI in two states of tune. 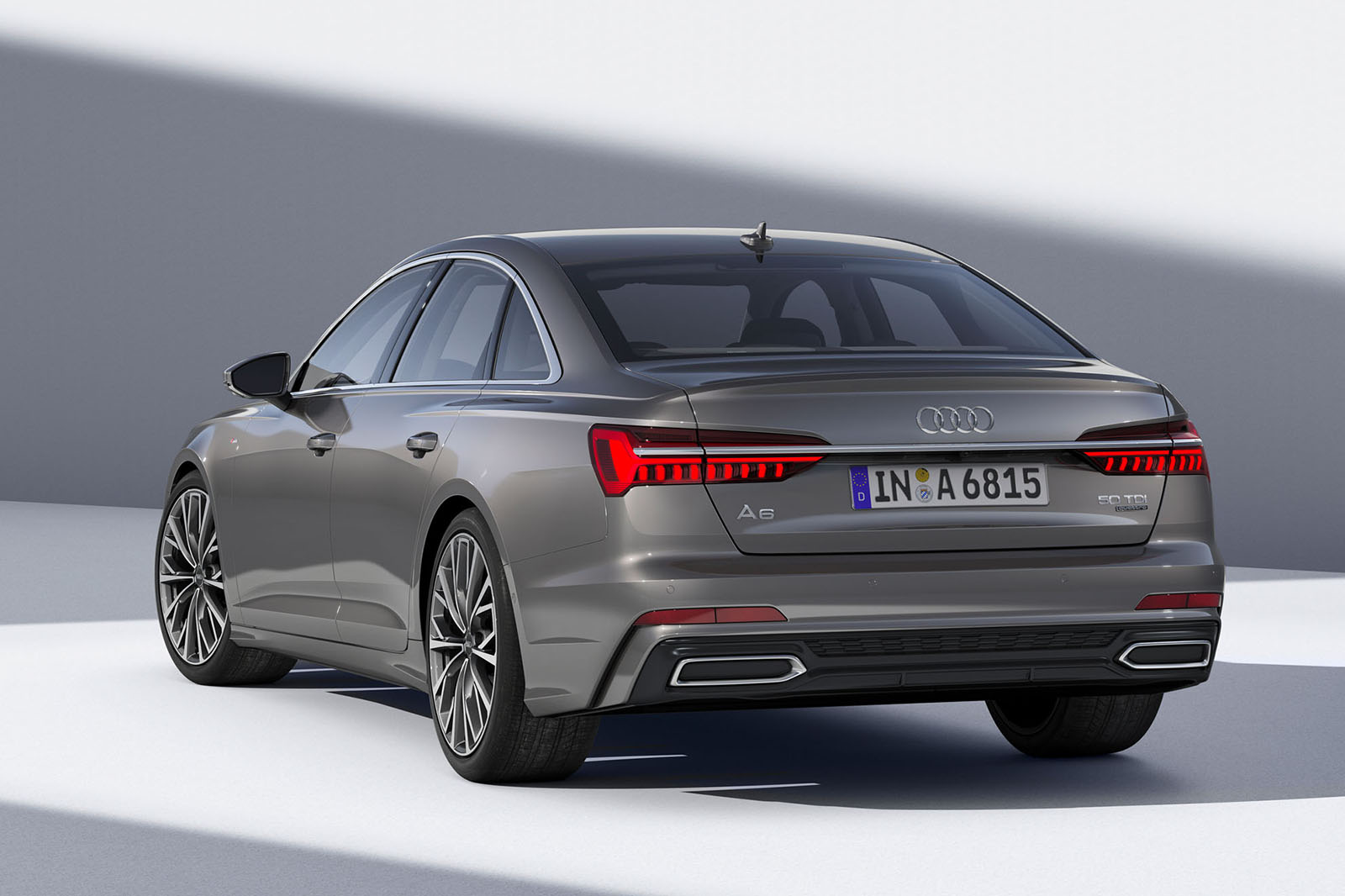 The two 3.0-litre TDI powertrains and 3.0 TFSI use a 48V electrical system, which has a lithium ion battery positioned in the rear axle and a starter/generator at the front of the car. This mild-hybrid system switches off the engine and cruises between the speeds of 34mph and 99mph. When decelerating, it switches off the engine between 4mph and 14mph.

The 2.0-litre TDI instead use a 12V electrical system that does not offer these features. The 12V system allows CO2 to be reduced by 4g/km and the 48V system cuts CO2 by 10g/km.

Although the mild-hybrid line-up is currently unusual in the car market, many manufacturers will soon offer the same in order to meet ever-demanding CO2 and air quality targets. 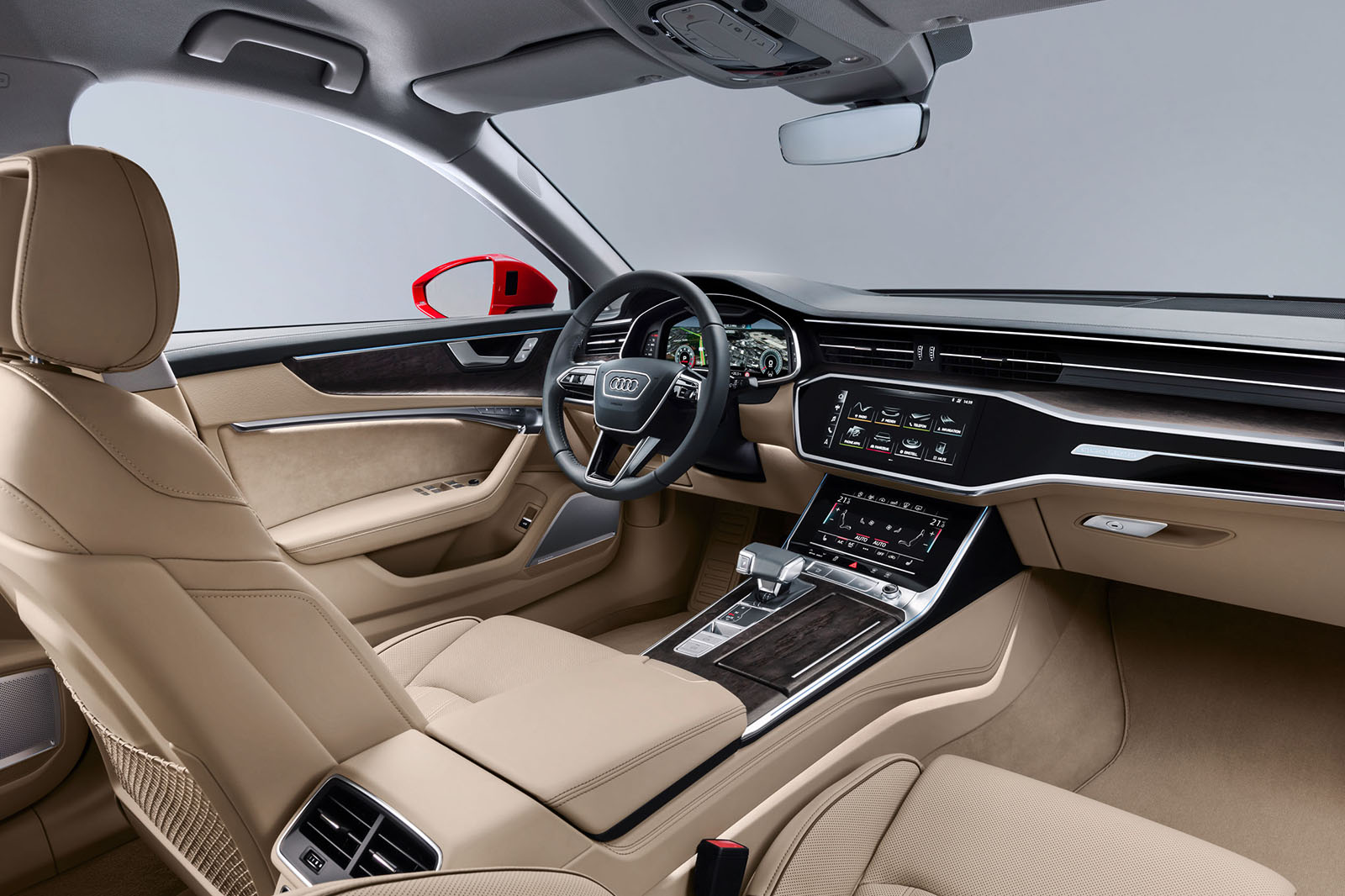 Audi also says a smaller petrol unit, a 2.0-litre TFSI, will arrive in the UK at some point in response to the growing demand for petrol, as diesel sales continue to fall.

Although there is no confirmed date for a plug-in hybrid A6, Audi said the chassis accommodates it. “We believe a plug-in hybrid will be bridge technology to electric,” said a spokesman. “Maybe there’s a surprise coming up.”

The new A6 is now offered with an automatic transmission only. Demand for manual transmission in its predecessor was less than 5% and Audi also recognises that adaptive cruise control works much better with an automatic gearbox. It also allows for some of the A6’s 37 driver assistance systems, such as parking a car remotely from a smartphone app, which is an updated version of its existing Parking Assist system. 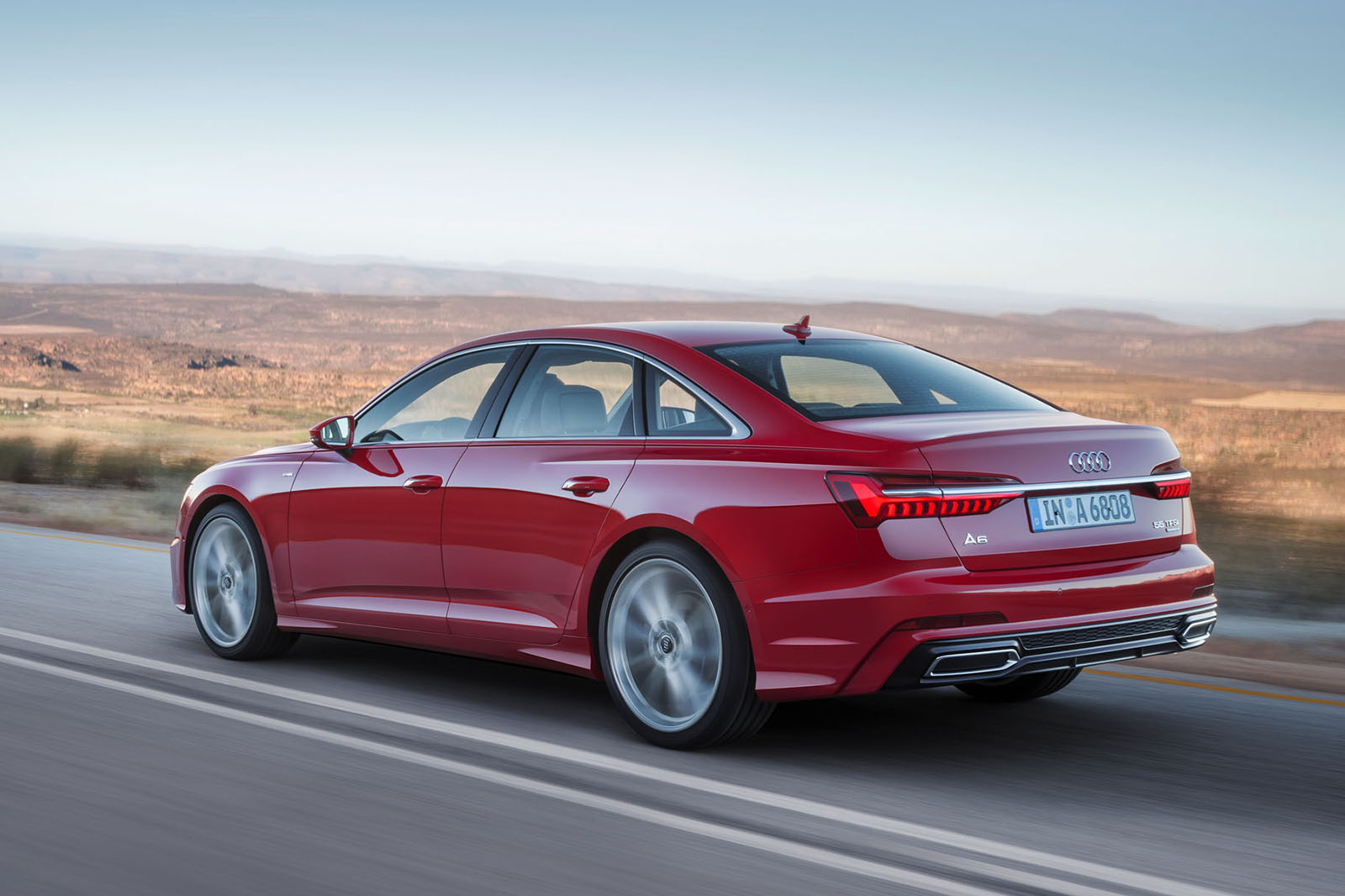 The UK will have two trim levels for the A6 – SE and S line – and Audi’s quattro four-wheel drive will be standard on all 3.0-litre models.

The A6 is 7mm longer at 4939mm, 12mm wider at 1886m and 2mm taller at 1457mm than its predecessor. That makes it fractionally longer and wider than the 5 Series but 22mm lower. Wheel size has alsoincreased and ranges from 17in to 21in. The largest wheel size available on its predecessor was 20in.

The new A6, which weighs from 1575kg, is 5kg-25kg heavier than the old one due to the mild-hybrid systems. “The lithium ion battery and starter/ generator add 25kg,” said A6 project manager Renald Lassowski. “We focused on overall consumption rather than reduced weight. We did try to improve other areas, though, such as reducing the weight of brake calipers.” Along with more sporty styling, Audi has also worked on the A6’s suspension to make it “as agile as a sports car, as manoeuvrable as a compact model”. The all-wheel steering’s ratio changes depending on the car’s speed, with the rear wheels able to turn as much as 5deg by a spindle drive. At high speeds, this is intended to improve stability. At low speeds, the aim is to make the car feel more agile and reduce its turning circle. 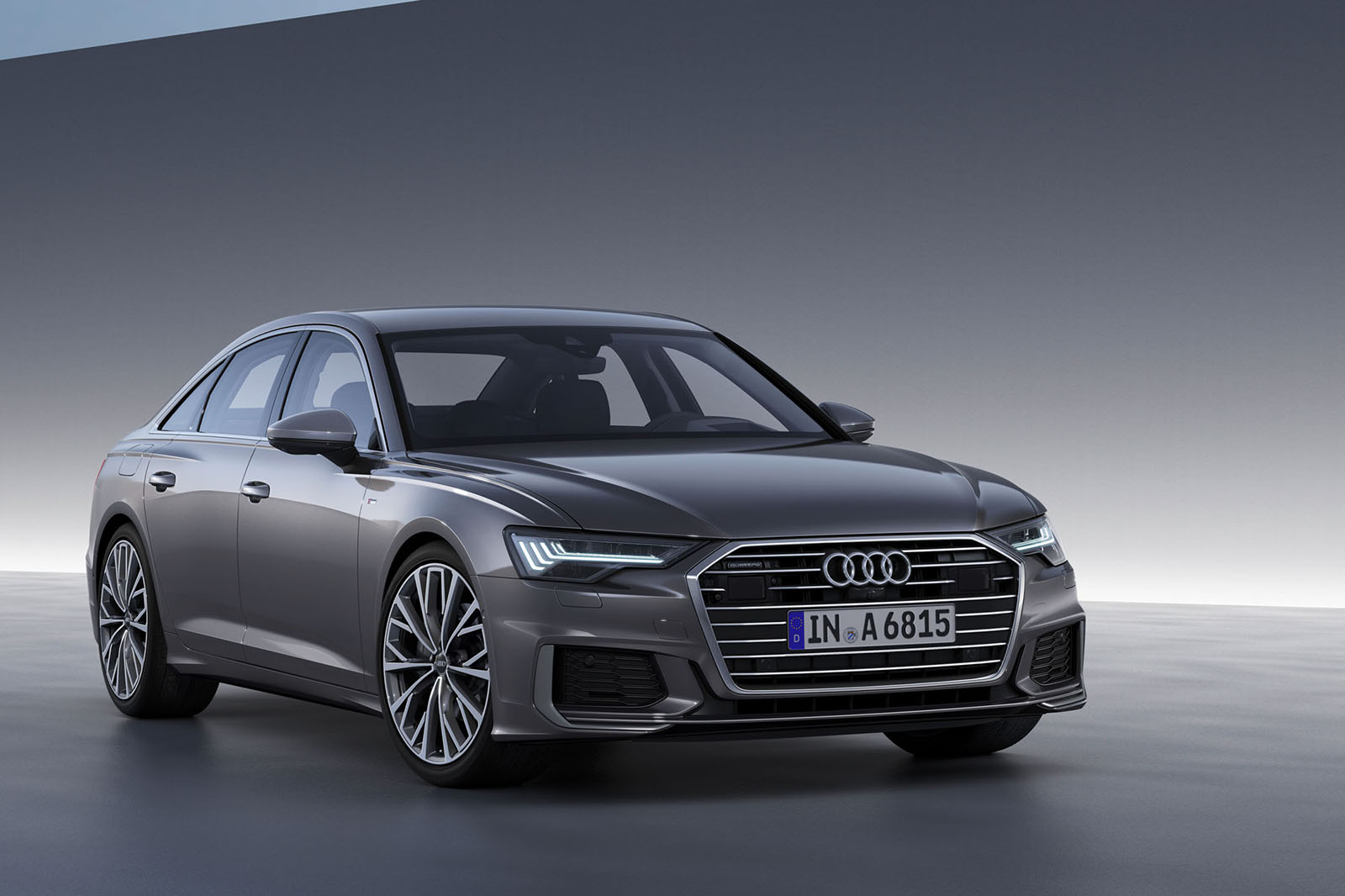 There are four suspensions available: standard suspension on SE models; sport suspension on S line cars; optional suspension with adaptive damper control; and fully adaptive air suspension, also an option. Inside, Audi claims there is more head room, shoulder room and rear leg room than before. Although boot space stays the same at 530 litres, the car maker says the boot has a wider aperture and can accommodate two golf bags horizontally.

Audi is positioning its infotainment system as a key selling point for the A6, describing it as a “futuristic operating concept”.

There are two central touchscreens, both 8.6in as standard, with a 10.1in upper screen available as an option. The system, known as MMI, allows vehicle functions, shortcuts and favourite buttons to be dragged and dropped, akin to a smartphone. 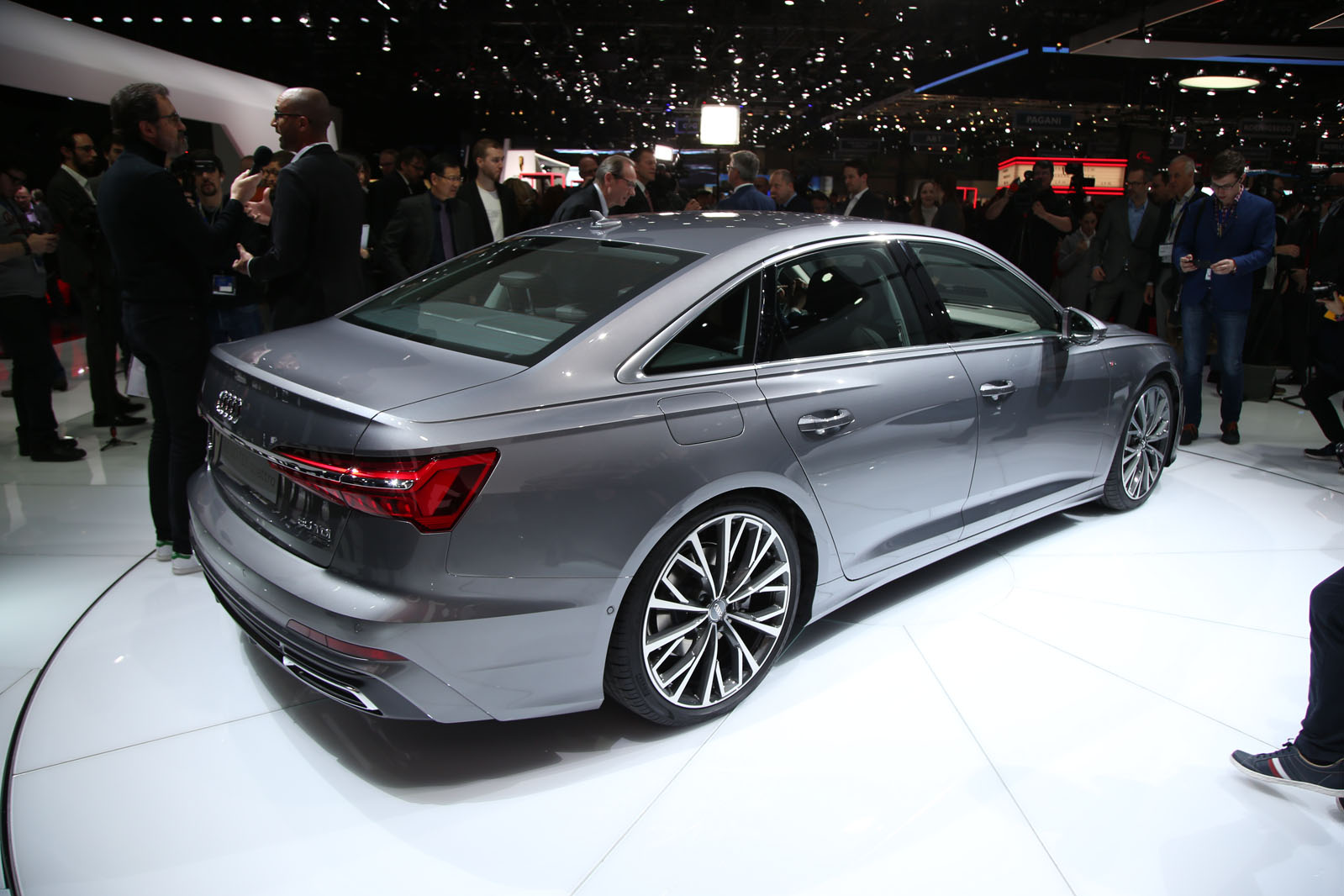 The top screen controls infotainment and navigation and the lower screen is used for climate control, convenience functions and text input. It has been designed so the driver’s wrist can rest on the gearlever.

Designer Philipp Römers said: “We see touch systems as the future. But we are not a big fan of iPads in the interior. That’s why we designed the black panel on A6 in a more driver-oriented position than in A8. So the panel is broken in the middle and angled to the driver.

“People are used to working touchscreens today in every part of their lives. We’re giving them what they know, making it easier for them to handle the car in the way they handle their smartphone.” 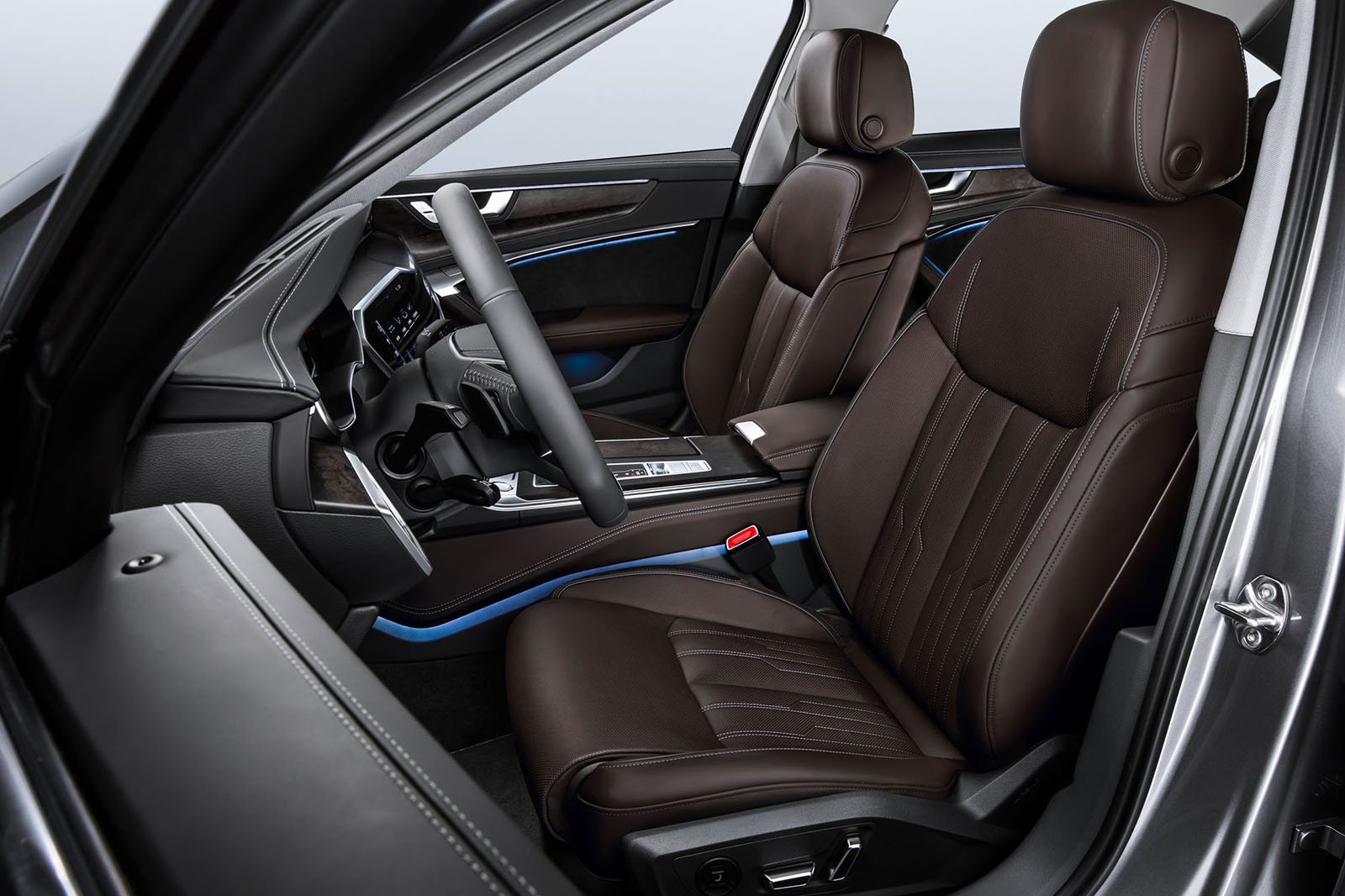 The new navigation includes a self-learning function based on driven routes, which generates intelligent search suggestions. For example, the system knows your daily route to work and will suggest another way if it knows there has been an accident. The nav also uses vehicle-to-x technology with other Audis for traffic and hazard information.

Among 37 driving assistance systems, bundled into three packages “to help avoid customer confusion”, there is the Level 3 autonomous driving system introduced on last year’s A8. Although the technology is available, the A6 faces the same issue as the A8: the legislation is not yet in place to allow the use of Level 3 on a public road unless it is for manufacturer testing.

This package of technology, new styling and mild-hybrid powertrains is what Audi hopes will help claw sales back from the 5 Series. The current 5 Series, launched in 2016, has achieved a growing advantagein sales over the older A6, with BMW selling almost 50% more 5 Series than Audi achieved for the A6 in Europe in 2017. 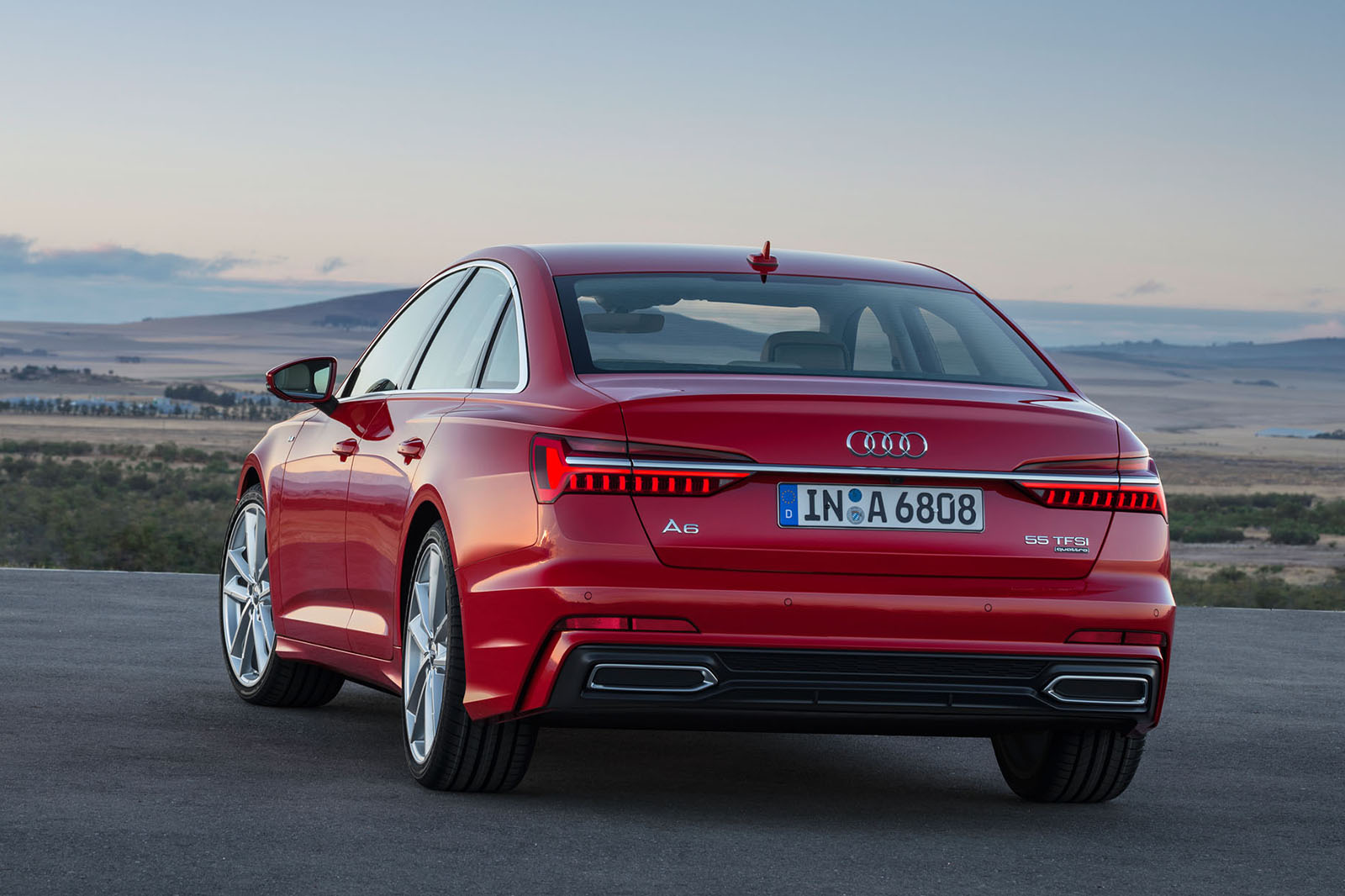 The 5 Series has long been rated the better car by Autocar in terms of both driving and all-round appeal but the A6 is highly rated too.

Premium executive saloons are one of the few segments not yet negatively affected by SUV growth – 2017 global sales were up 14%, according to Jato Dynamics – so Audi is in a good position to capitalise with the new A6.

Its pricing is expected to rise above the current model’s starting price of £33,160 to around £37,000. The most popular model in the UK is likely to be the 2.0-litre TDI S line S tronic.

An estate version, the A6 Avant, will be revealed later, and a hot RS6 version is very likely but unconfirmed. Audi will also offer a long-wheelbase version of the A6 for the crucial Chinese market.

Seems a bit too reliant on a tablet inside the car for controls, what happened to a mechanical control for important things....I know what they will then employ another system to alarm when you take your eyes off the road. The more I see new cars the more I want to keep hold of my existing saloon.

I thought diesels  would be out of favour now, even in Germany it seems..