BACK TO ALL NEWS
Currently reading: 2018 Aston Martin DBS Superleggera revealed as Ferrari 812 competitor
UP NEXT
New 2023 Porsche 911 GT3 RS is "most track-focused" ever

The new Aston Martin DBS Superleggera is the fastest and most powerful car the company has yet produced — and the 211mph super-GT has the Ferrari 812 Superfast firmly in its sights.

The British manufacturer has revived the DBS nameplate last seen in 2012 for the new model, which effectively replaces the Vanquish S as its performance range-topper. The Superleggera suffix means ‘super light’ in Italian and harks back to the original DBS from 1967. The Vanquish name will now be saved for the firm’s McLaren 720S-rivalling mid-engined supercar, due in 2021.

While it effectively replaces the Vanquish S, the new DBS Superleggera has a different brief. Aston Martin’s exterior design chief, Miles Nurnberger, said the name was “just wonderfully romantic”, and added: “This car is what it says it is. If we’d gone with another generation of Vanquish, you’d have a different car here.” 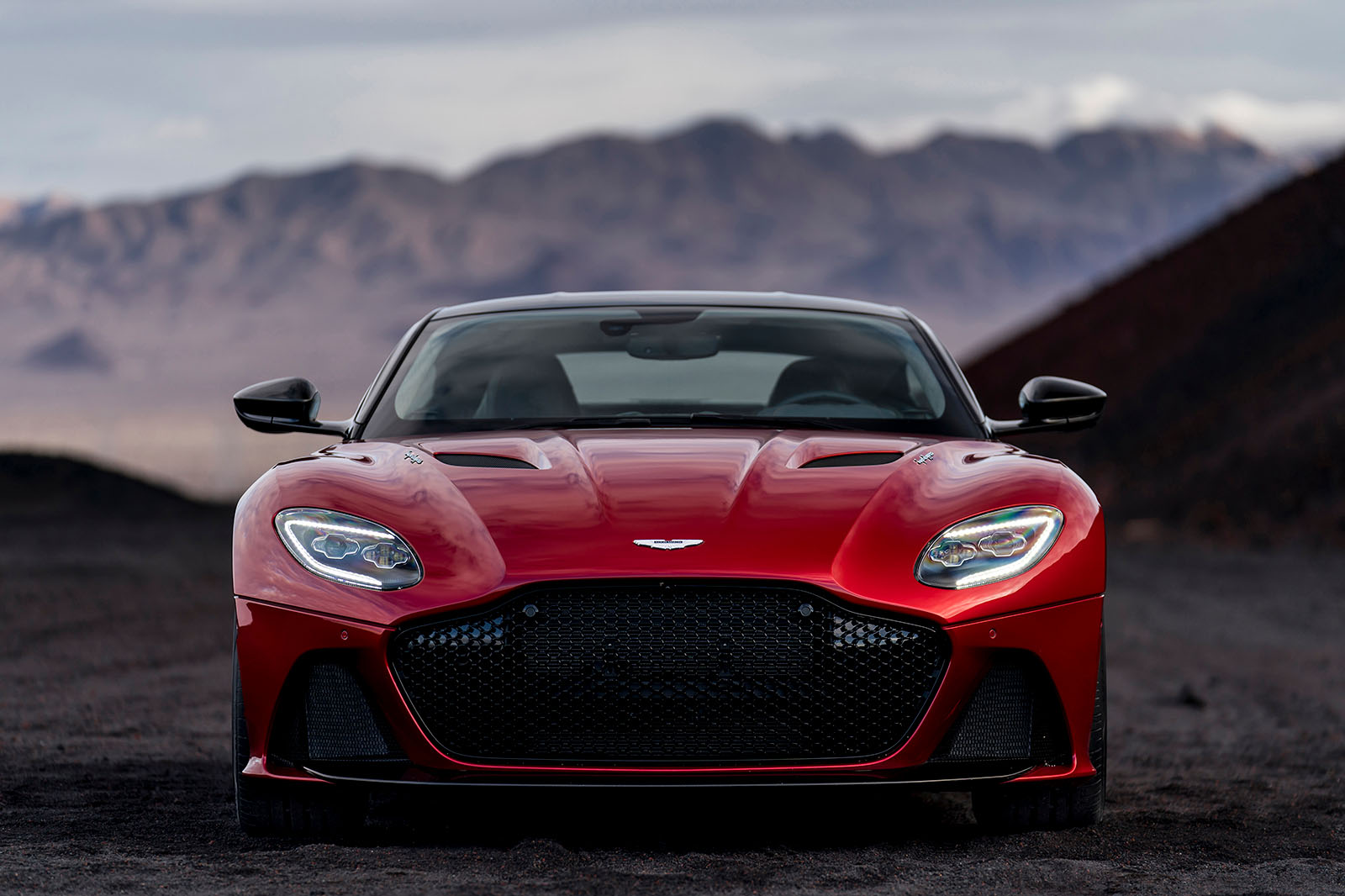 The new DBS Superleggera is based on the underpinnings of the Aston Martin DB11 and shares the same Aston-made turbocharged 5.2-litre V12 engine. The unit has been reworked to make 715bhp, compared with 630bhp in the DB11 AMR. In the Superleggera, the engine generates 664lb ft, available at 1800-5000rpm. That’s 148lb ft more than the DB11 AMR.

The Superleggera sports a bolder front grille, along with new headlights and tail-lights, to further differentiate it from the Aston Martin DB11, as part of Aston’s plan to put more space between the cars in its range. It is the first car not to feature the brand’s winged logo on its rear boot lid, with the name Aston Martin spelt out there instead. 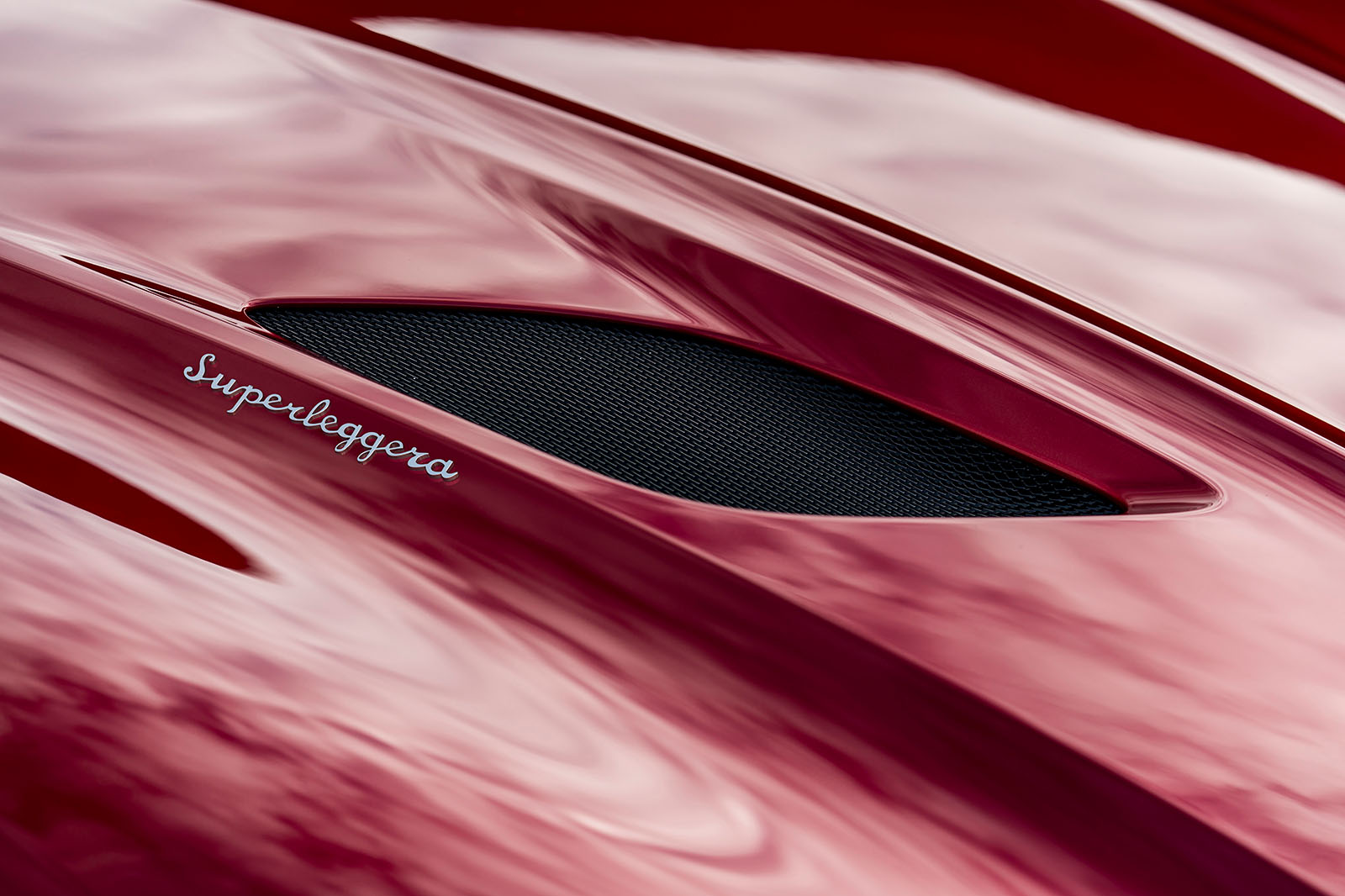 Also new is a quad exhaust system, which has been tuned to produce a “more expressive” noise, according to chief engineer Matt Becker. That makes it 10db louder than the DB11. Becker added: “We don’t just want more noise, we want quality noise.”

The bodywork features a front splitter, extensive underbody aerodynamics, a rear diffuser and a new Aeroblade 2 rear wing, generating 60kg of downforce at the front of the car and 120kg at the rear. The 180kg total downforce is the most of any road-going Aston Martin, yet the DBS produces the same drag as the DB11, which makes just 70kg of downforce.

The DBS Superleggera has a dry weight of 1693kg. It sits on bespoke Pirelli P Zero tyres, with 21in wheels. 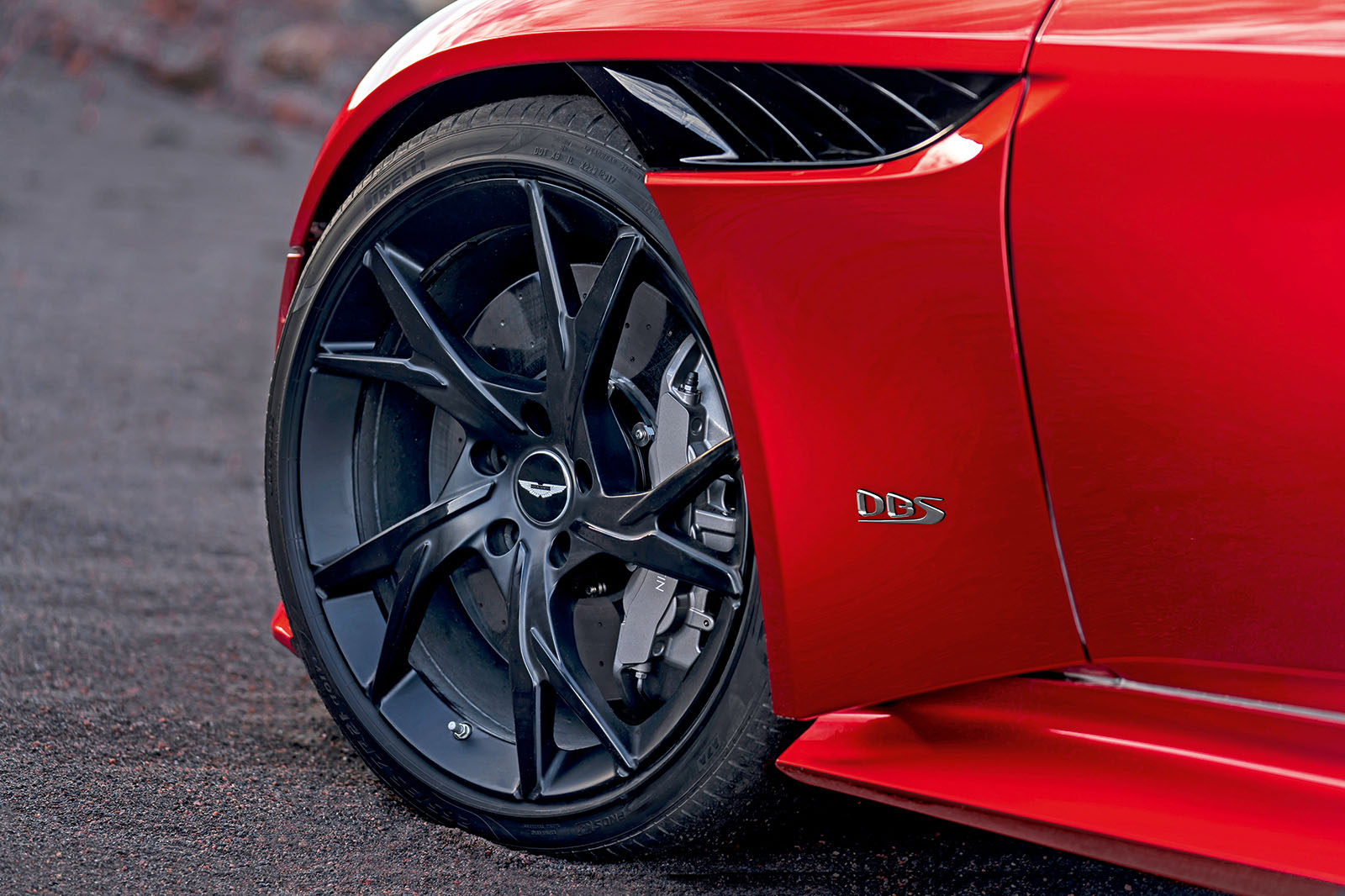 Despite those figures, Becker said the car has been designed to combine comfort and performance. “We wanted to develop something that’s incredibly fast but feels Vantage-like in its size and response,” he said.

“The performance figures might look scary —and this car is incredibly quick — but you don’t have to be a hero to get the most out of it performance-wise.”

Becker said extensive tuning work has been done on the ESP and traction control to cope with the torque and how quickly it builds up. He added: “It has a playful nature. If you slide the car and know how to drive, it gives you all the information you need to make the right decision about when to put your foot on or off the throttle.” 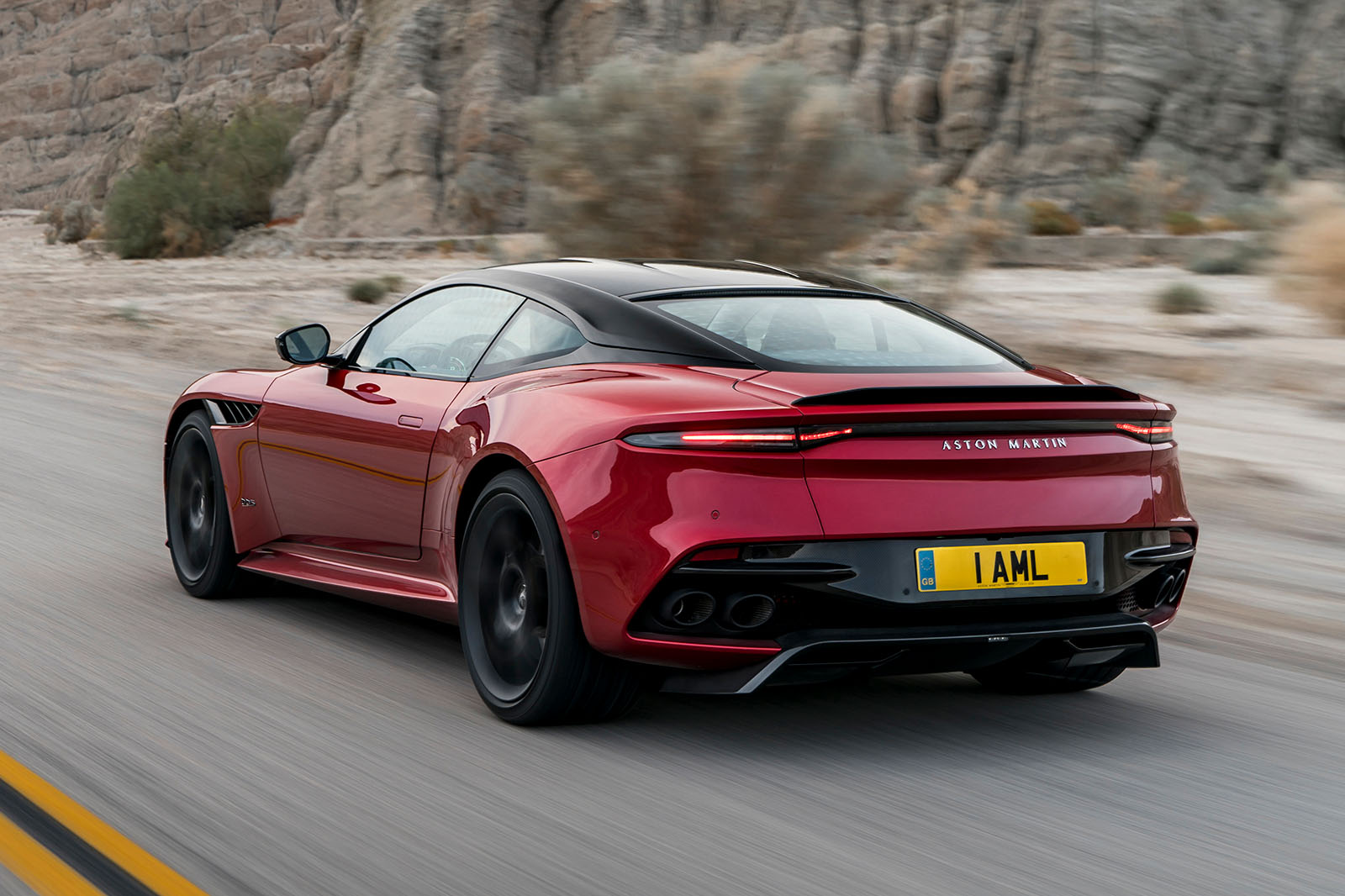 Aston Martin is targeting existing Vanquish customers as well as Ferrari buyers who want “something that is as quick but less intimidating”, according to Nurnberger. The DBS Superleggera follows the DB11 and Aston Martin Vantage as the third product in the firm’s ‘second century’ plan to launch seven models in seven years, and Nurnberger said that broadening the product range will enable Aston Martin to push for customers who aren’t part of its existing base.

The DBS Superleggera is due to go on sale later this year in coupé form, with pricing starting from £225,000. A Volante version, which has already been spied testing, is set to arrive in early 2019.

Not only does DBS have a brand-new gearbox, necessary to handle the monstrous 664lb ft peak torque, it also comes with a lowered final drive ratio for even more punchy in-gear performance. It carries the same 2.9:1 ratio as the Vantage, reduced from 2.7:1 of the DB11. 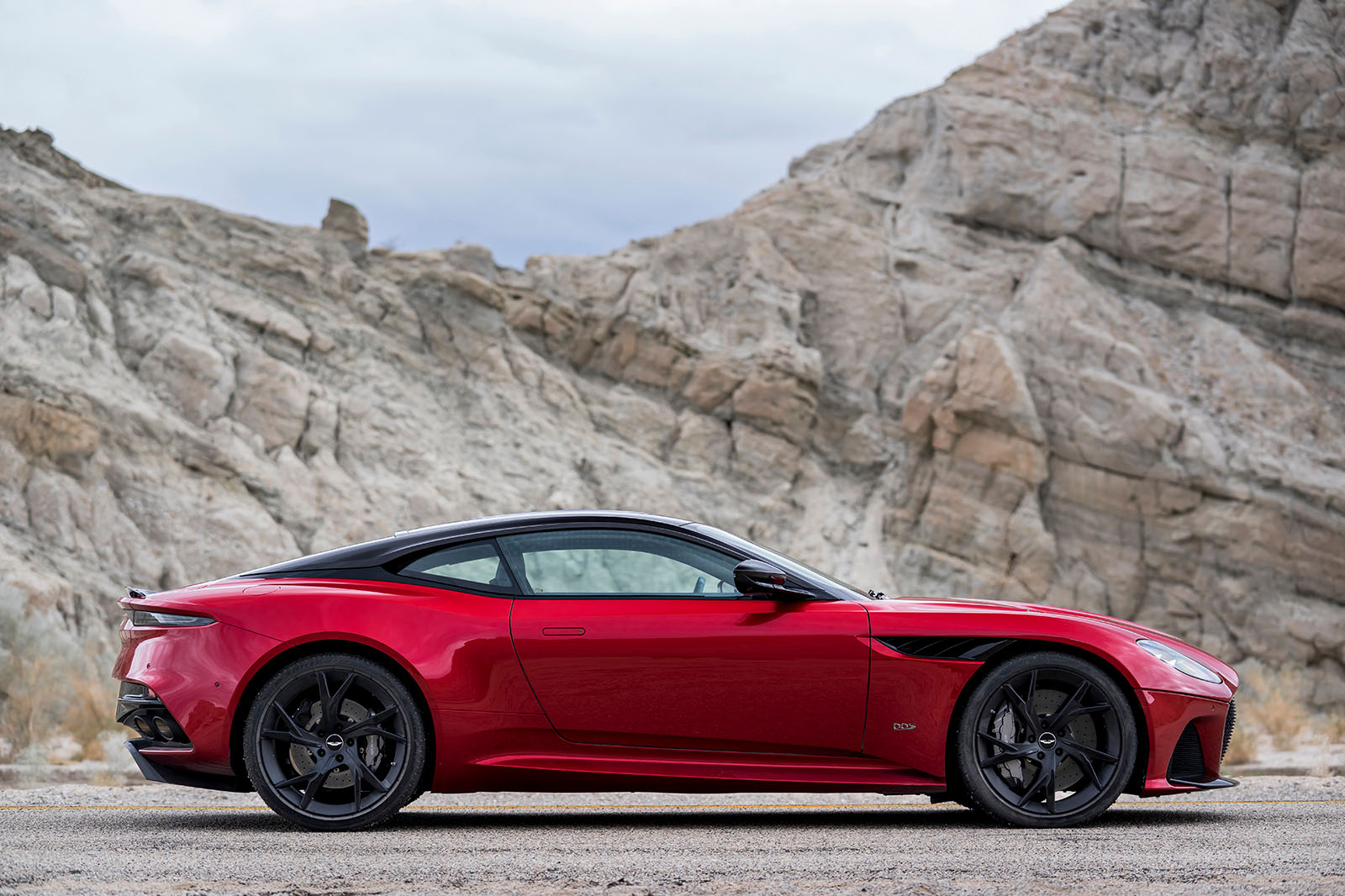 The V12 engine produces 715bhp in its latest state of tune, but don’t presume it’s just a matter of time before it makes it into the Vantage. “Anything’s possible and the engine fits — just,” says Aston’s Matt Becker, “but it takes a hell of a lot of cooling and there’s just not the space for that in the Vantage as it is.”

The car comes on bespoke Pirelli P Zeroes that look the same as those fitted to the Vantage but are in fact of completely different compounds and constructions, and are filled with PNCS noise- cancelling material. Wheel rims are 21in in diameter and come with a choice of forged alloys: one standard, one lightweight. 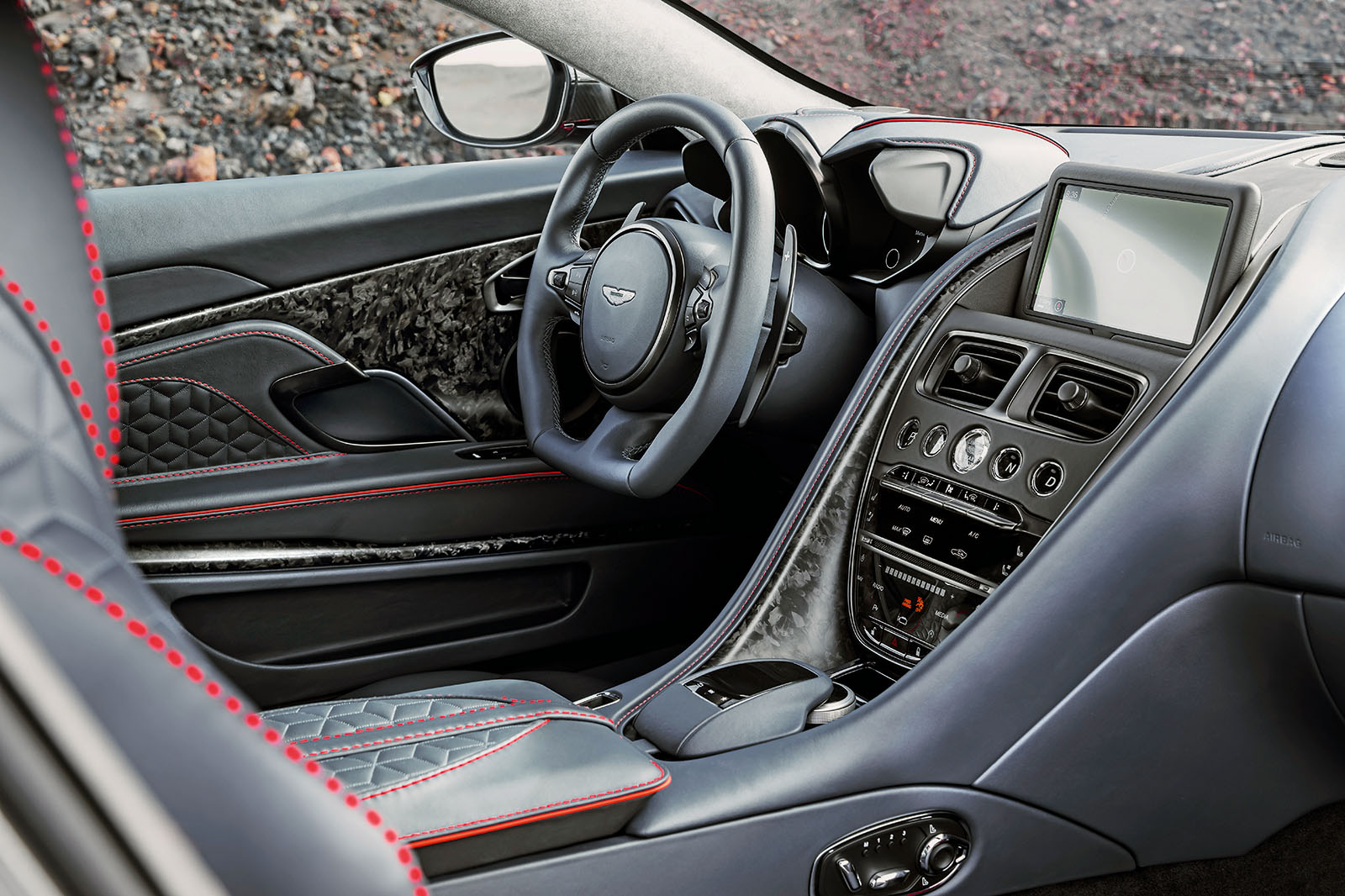 The Aeroblade II rear wing, venturi under the car, the front splitter and the double diffuser at the back all combine to create 60kg of downforce at the front and 120kg at the rear. By comparison, the DB11 has 50kg of front lift and 20kg of rear downforce.

Is it under powered?

715 BHP is enough poke for any man, but when the Ferrari has almost 800 BHP without using turbos, I just think that they could have tried a little harder and matched the Superfast in the numbers stakes, if not beaten it.

Yes, I understand numbers aren't everything, but it just seems to me that they're adding turbos - and extra weight and complexity - for what? Maybe increased torque and real world overtaking power, etc.

Also it's going to be less stressed than the Ferrari, I would imagine, and they've left plenty of breathing space to upgrade the facelift versions that will arrive in a couple of years.

Still a beautiful car that anyone would surely love to own, though, but I can't help but feel that Ferrari are still one step ahead of the game in comparison.

I guess they're just using

Superleggera (Superlight) sounds better than Supergrasso (Superfat), even though the second option is nearer to the truth! :)

Superleggera (Superlight) sounds better than Supergrasso (Superfat), even though the second option is nearer to the truth! :)