From £152,8659
The most driver-focused DB11 yet is a night-and-day improvement over Aston's original V12
Open gallery
Close

The DB11’s life so far has been short but busy. It debuted in 2016, offered in V12 guise only, but the cheaper, slightly less powerful V8 model arrived soon after and the drop-top Volante fleshed out the range earlier this year. Now, after just two short years on sale, the DB11 V12 has been retired.

Worry not. Aston Martin is replacing it with the DB11 AMR, the fastest, most driver-focused DB11 yet. Naturally, it uses the familiar 5.2-litre twin-turbocharged V12, which is now good for 630bhp. That’s a 30bhp gain over the departed DB11 V12 and 127bhp more than the eight-cylinder model can manage. The new car doesn’t stop accelerating until 208mph, while 0-62mph takes 3.7sec.

The chassis has been tweaked, too. It now incorporates many of the improvements that were introduced for the V8 model. There are stiffer suspension bushes to help locate the rear axle more securely, but the spring rates are unchanged. Aston doesn’t want to nibble away at the DB11’s GT character, after all.

The dampers, however, have been revalved so that they offer tighter body control and sharper responses. An ever-so-slightly thicker front anti-roll bar balances those revisions front to rear, while the wheels are now forged, saving 3.5kg of unsprung weight at each corner.

AMR stands for Aston Martin Racing — the marque’s World Endurance Championship squad — and, since 2017, it has been used to mark out the fastest, sportiest models in Aston’s line-up. A very small number of DB11 AMRs — just 100 worldwide — will be sold in Signature Edition trim, which adds a searing lime-coloured body stripe and equally bright accents throughout the interior. The Signature Edition model sells for £201,995.

Series DB11 AMRs come in a range of rather more sober colour schemes and cost £174,995. The darker headlight cowls, gloss black detailing and more extensive carbonfibre trim are there to distinguish the DB11 AMR from the model it supersedes. 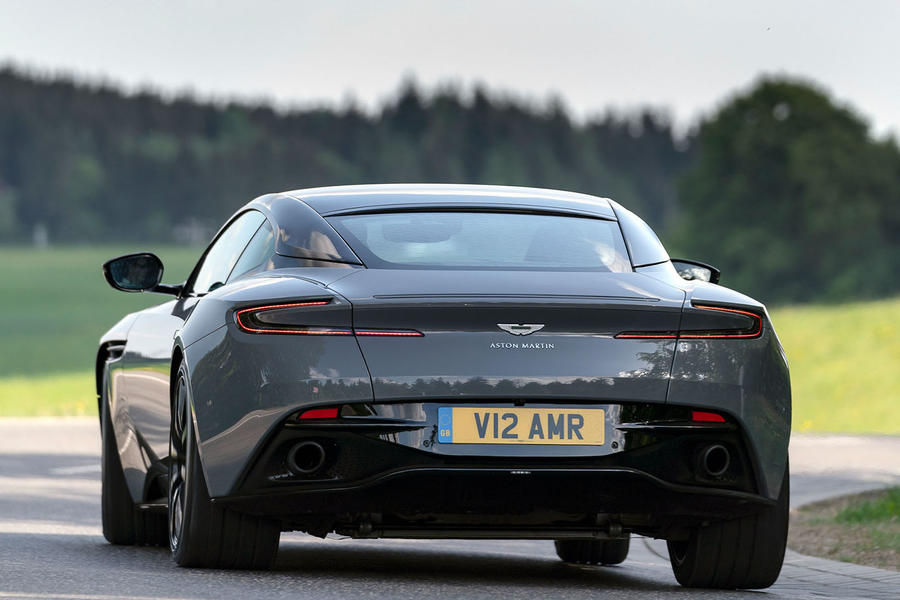 It wasn’t so long ago that an overhauled version of an existing model — a little more power here, slightly sharper dynamics there — would have been the highlight of Aston’s year. Things are very different today.

The brilliant new Vantage is still only a few weeks old, the Valkyrie hypercar is well on its way, the DBS Superleggera is just around the corner and a new mid-engined supercar to rival the Ferrari 488 GTB is in development.

There is much more besides, too — all of which qualifies Aston as one of the most active performance car makers on the planet right now. In among all of that noise, this DB11 AMR isn’t much more than a whispering voice.

That doesn’t mean Aston has hurried it through, however. Quite the opposite. This has been a considered and attentive development process that has paid dividends. The DB11 AMR is such a night-and-day improvement over the original V12 that you can’t help but feel a pang of sympathy for owners of those early cars.

Gone is the harsh, hollow quality to the damping; the new version is beautifully suspended. Its ride may be tight and firmly controlled, but even on very bumpy roads there is enough composure in the damping that it never gets uncomfortable. Body control has been improved, too.

With the rear axle now better located, thanks to those stiffer bushes, and with less ill-tempered squirming from the rear end over bumps in the road surface, traction has gone through the roof.

Dig into the throttle pedal in second gear and you won’t hear so much as a chirrup from the rear tyres. All told, the DB11 AMR is sharper and more responsive than the old model without being any less cosseting on a longer drive.

What about the engine? You probably won’t notice the extra 30bhp, but you’ll be very well aware of how rampantly accelerative the car is. The V12 has power and torque everywhere.

It’s the noise that gets you, though. Turbochargers have a habit of muffling an engine’s soundtrack like a sock stuffed into a tenor’s mouth, but somehow Aston has teased a rich and musical soundtrack from the DB11 AMR’s exhausts.

For all that this car is a huge step forward over the previous version, however, it isn’t perfect. There is an unholy alliance of precise-but-remote steering, forward visibility that is compromised by a high scuttle and a long bonnet, and the simply vast footprint that means the DB11 AMR is not the sort of car you can jump into and drive quickly right away. You have to build up to it, allowing your confidence to grow with every mile.

There is also the not-so-small matter of the DB11 AMR’s weight; it’s around 100kg heavier than the V8 model. You’ll feel it when you really chuck the car into a tight corner and it struggles to hold a line that the lighter model would happily stick to.

But everywhere else, it should be said, the V12 car disguises its mass very well indeed. 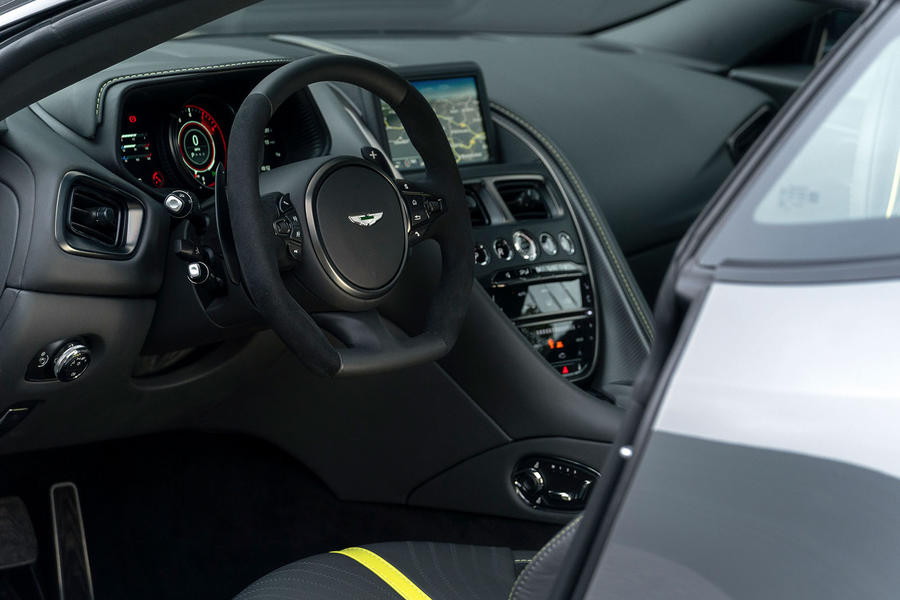 For the past eight months, the pick of the DB11 range has been the entry-level V8 model. It is sharper and more rewarding to drive than the old V12, without being a great deal less accelerative. 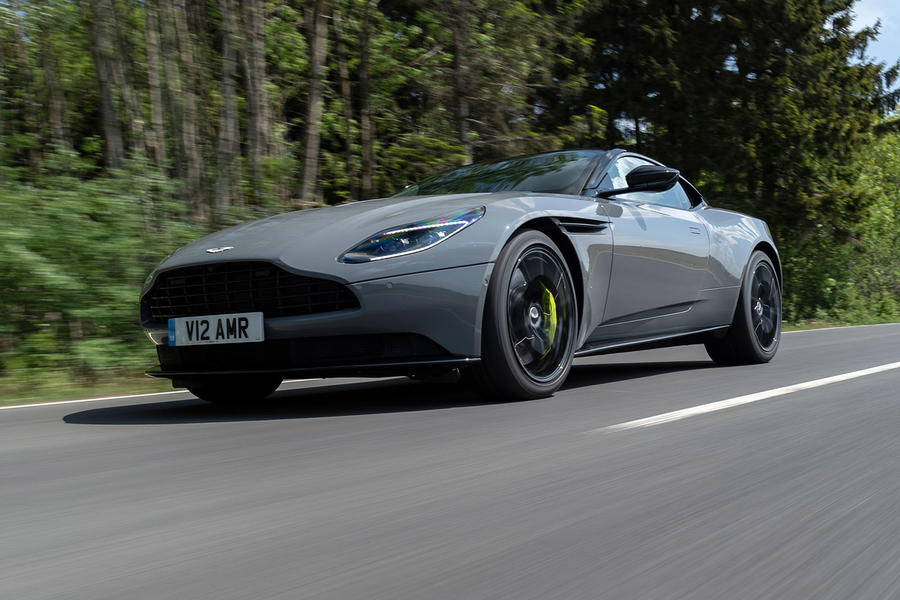 Thanks your review for Aston Martin DB11 AMR 2018. It readly useful information with me. Click unique girl names free.

Is it me or have we been here before with Aston Martin? Ok, the DB11 was a big shake up from whats gone before with Aston, but at the time the same was said for the DB9. Then their problem was that each product launch there after was just a rinse and repeat of the DB9 success. V8 Vantage, DBS, V12 Vantage, Rapide, Virage, Vanquish were all so similar in style and execution that their product launches became pretty stale and they got themselves into the pretty low postion they were in just prior to the Mercedes tie-up and DB11 launch.

Perhaps theres hope now that the new Vantage has a bit more of an indivual character over the DB11, but for Aston Martin's sake I hope the DBS is a bit more than an AMR with new headlights and a bit more power.

Then their problem was that each product launch there after was just a rinse and repeat of the DB9 success. V8 Vantage, DBS, V12 Vantage, Rapide, Virage, Vanquish were all so similar in style and execution

I know what you mean, but think of it more of a brand look.   People often overlook Audi yet so many have the same front end.   You instantly know it's an Audi, but perhaps not which one.

For Aston, you could tell the differences so it wasn't quite as bad as some journalists made out.   Although the last Virage was an evolution of the DB9 which then became the DB9 so you do have a very valid point there!

The next DB11 will be the DBS edition, the same car but with more power, extra scoops on the bonnet and sligthly different grill and headlights.   But essentially a DB11.

But the SUV might sink the company before the new Vanquish arrives.