The Skoda Kodiaq has been teased in official pictures and a video released by the manufacturer ahead of its debut on 1 September.

The pictures show a glimpse of the front, rear, doors and wheels of the SUV, which will go on sale in early 2017 with a choice of five different engines, optional all-wheel drive and seven seats.

There will be a choice of a six-speed manual or six-speed DSG dual-clutch automatic gearboxes, and while front-wheel drive will be standard, all-wheel drive is available. An extra two seats in the third row can also be specified, and the manufacturer says the Kodiaq will have a 720-litre capacity boot, rising to 2065 litres with the rear seats down. Skoda claims the five-seat Kodiaq has the largest boot in its class.

It will get a touchscreen infotainment system which, depending on specification, can be used as a wi-fi hotspot featuring various mobile online services that allow passengers to browse the internet. It also has Apple CarPlay, Android Auto and MirrorLink, and an emergency call function will also be available. 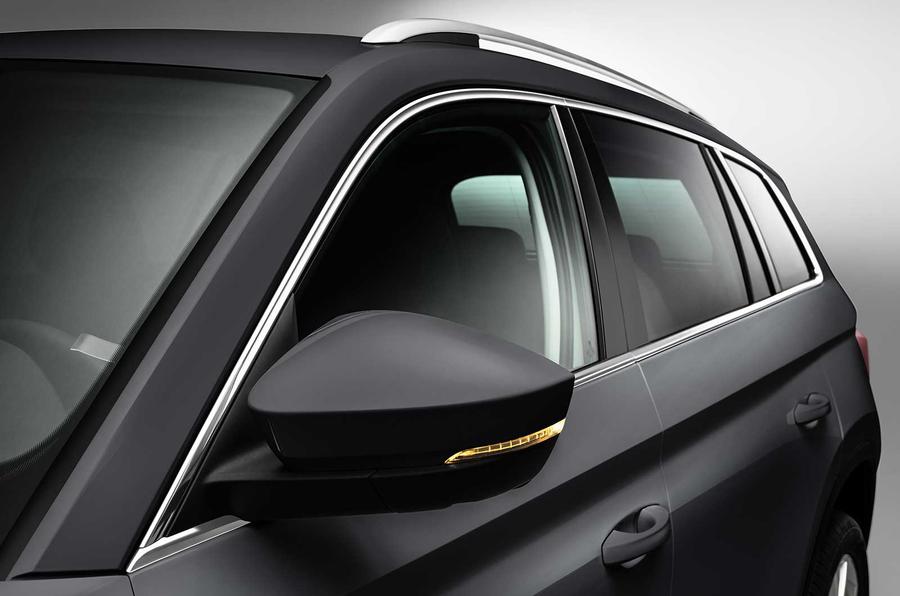 We've driven a prototype version of the Kodiaq, and the car was spotted testing at the Nürburgring ahead of its official unveiling at the Paris motor show this autumn.

The SUV was previously teased in a pair of sketches, confirming that the production model's design will retain most of the look of the VisonS concept on which it is based.

It's clear that the Kodiaq development car has kept the VisionS's bulky wheel arches, although it does appear to have a slightly more slanted nose - perhaps to conform with pedestrian impact safety standards - and lightly reshaped headlights. 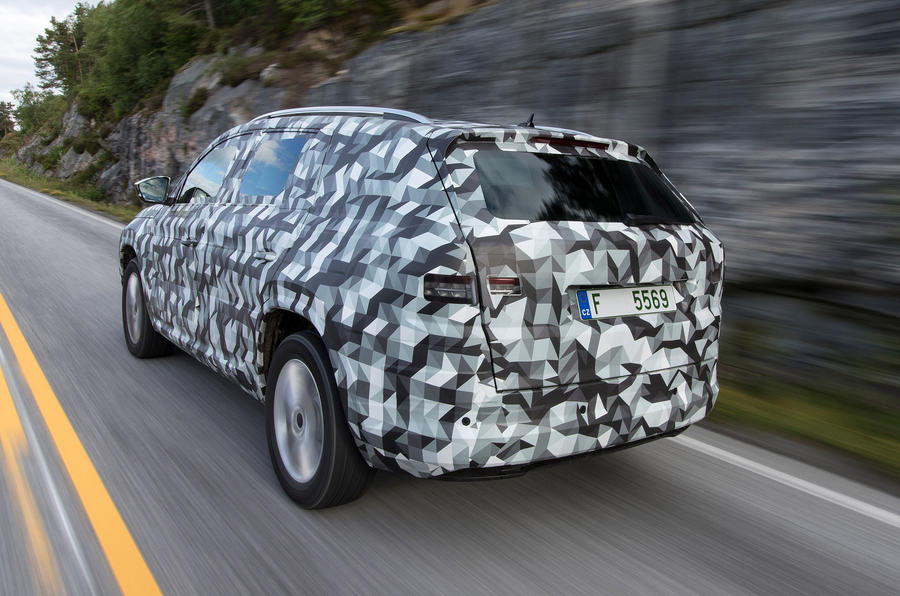 The new model's name, Kodiaq, was confirmed earlier this year and comes from a species of Alaskan bear, although the spelling - kodiak - has been altered. Skoda says this is to make the name "more distinctive".

It was said from the start that the look of the VisionS concept would be toned down for production, but key elements, including the prominent front grille, are likely to remain relatively unchanged. The conceptual interior of the VisionS will be altered for the production model, though. 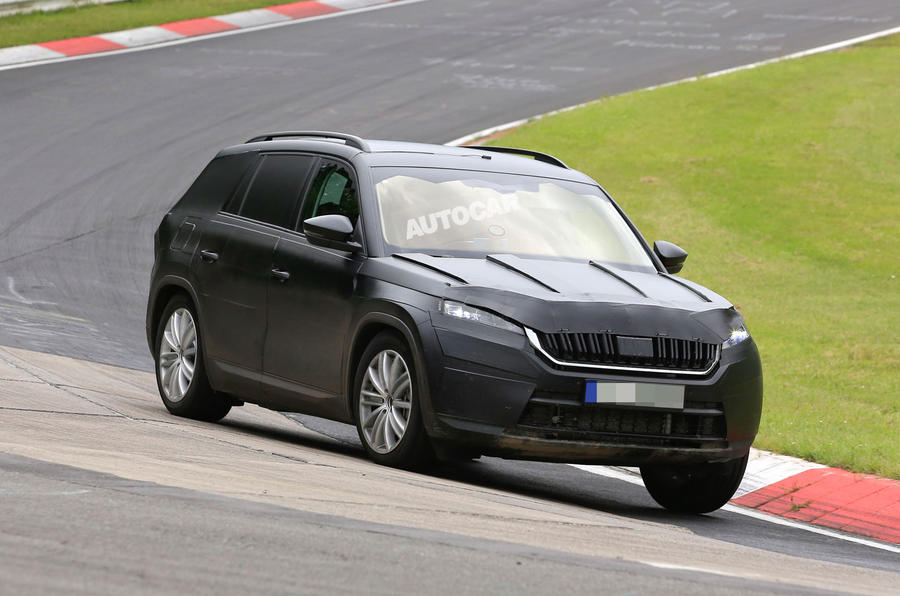 The new SUV is expected to become a big seller for Skoda, introducing new customers to the marque and paving the way for future SUV models. It will also introduce a fresh, more 'emotional' design language which will be seen on all the brand's future cars. It’s already known that a rakish five-door coupé-like SUV is planned following the initial Kodiaq launch, as well as a performance version with sportier styling, which could carry the vRS badge.

The SUV-coupé, a rival for the likes of the BMW X4 and Mercedes GLC Coupé, is currently only designated for China but is likely to also be sold in Europe. Another crossover-style car with "SUV elements" is also in development for the Chinese market, and will arrive in 2018. Skoda boss Bernhard Maier has previously said: “We might imagine there will be further models [in the SUV family]." 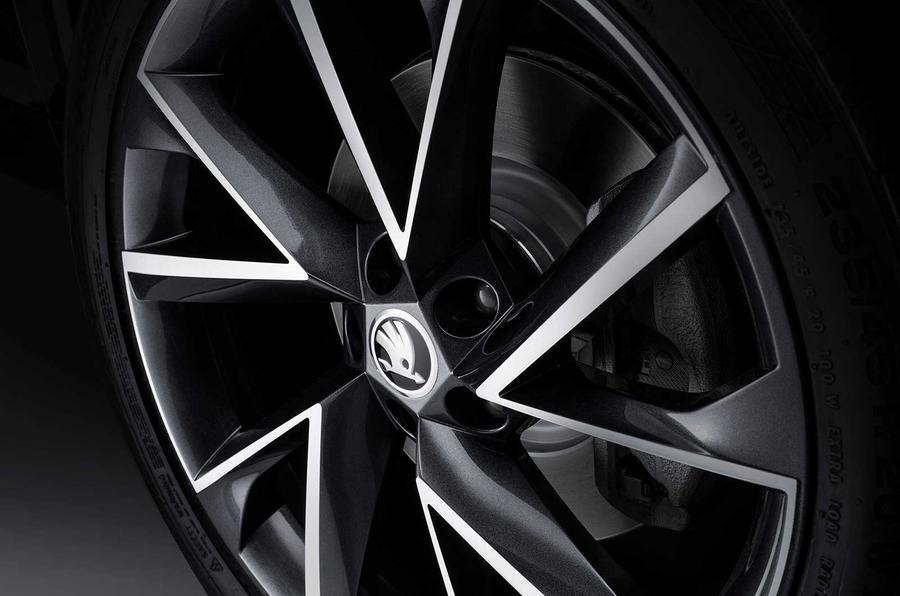 Beyond the launch of the SUV family, Skoda's Yeti will morph into a larger model with a more traditional SUV shape. Maier is promising more space than in the old car, and it's extremely likely that a hybrid variant will form part of the launch range. Skoda is also known to be working on a bespoke electric vehicle for launch in 2020/21, and although the shape of that model is currently undecided, an SUV or crossover body would appear to be a strong choice.

“We’ve seen for some time that the SUV segment has experienced the strongest growth in the market,” said Maier. “That was the reason for Skoda to decide to invest in this segment. There is already major demand for the Yeti, and we hear from existing customers and from those that want to be customers that they would like to see a Skoda SUV. We have additional ideas on top of this.” 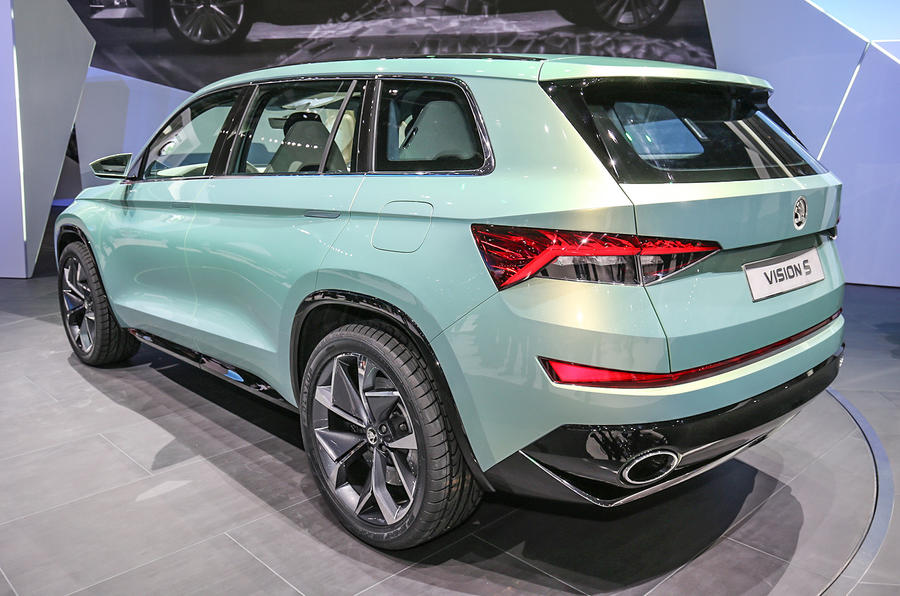 Maier said that the traditional properties of an SUV – a raised seating position, clear visibility, storage space and practicality – fitted in well with Skoda’s brand values. He also confirmed that future Skoda models will feature a design language akin to that of the VisionS – a key driver in attracting younger customers to the brand.

Asked whether Skoda could explore additional larger or smaller models after the Kodiaq goes on sale, Maier said the decision would depend on "the demands of the market".

Read more about the Skoda VisionS

Read up on the new Skoda SUV whats its name.
I am quite impressed for someone who remembers the first Skodas ever to come out in the early 70's
As I have a lease car at the moment and still have a bit to run on the lease I will certainly look at the Skoda as a car to purchase (not enthralled with leasing)
When I do come to look at the Skoda SUV whats its name in 2018,then I am sure I will be able to pick a handsome secondhand one top spec for about half the price of a new one,after all its only to take the dog out.
As I am sure you will agree no matter how good (or bad) people say they are, they still don't hold their price.
xxxx 10 August 2016

Testing at the Nürburgring???

Why, it's a 7 seater SUV not a performance car
View all comments (20)