BACK TO ALL NEWS
Currently reading: 2017 Lexus LC500: under the skin of the 467bhp V8 performance coupe
UP NEXT
New Lamborghini Countach: epic UK road trip in reborn icon

Koji Sato, Lexus’s chief engineer, tells us why the successor to the mighty Lexus LFA is shaping up to be a landmark car for the Japanese brand
Open gallery
Close

The new Lexus LC500 feels so familiar that it is a little strange to consider that the production car only made its dynamic public debut at the Goodwood Festival of Speed back in July.

In other ways it is not surprising, for the origins of the Japanese brand’s new flagship stretch back to the 2012 Detroit motor show, when the bold Lexus LF-LC concept was revealed.

The show car wasn’t originally supposed to signpost a future production model, but Toyota and Lexus president Akio Toyoda was so encouraged by the response to the LF-LC that he tasked the company with closely translating it into a road car that could potentially bother the Porsche 911 Turbo.

The dimensions have changed from concept to production, but the mission has not: like the LF-LC, the new car is charged with injecting additional emotional resonance into the brand and its products and providing more engaging driver’s cars, albeit without losing ride comfort. 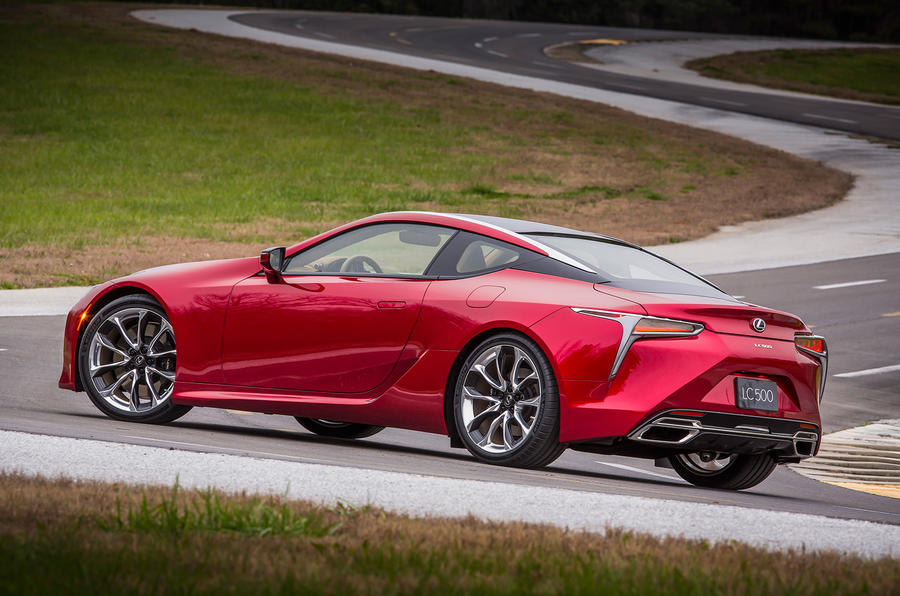 Speaking to Autocar in the summer, Koji Sato, Lexus’s chief engineer, described the significance of the front-engined, rear-wheel-drive 2+2: "It is a symbol of the Lexus brand shift. Previously Lexus has been known for well-made, comfortable cars with good fit and finish. Those areas were the characteristics for people who buy a Lexus.

“But we are car lovers, and many of the team at Lexus were thinking that we were missing something. In 2012 our president decided the brand should move in a more emotional direction, connecting with driving pleasure and cars that are fun to drive.”

The Lexus LC500 is the first result of that new thinking. Sato says the car is supposed to be “beautiful yet emotional, more brave in terms of design and performance. I believe that is the new taste of Lexus: even sharper handling, yet still refined.” The exterior looks are the work of chief designer Tadao Mori.

The significance of the LC500 runs deep: it is underpinned by the new GA-L platform that will also form the basis of other luxurious front-engined, rear-wheel-drive models from Lexus. The modular structure can be shrunk or grown as necessary; expect it to underpin future versions of the Lexus GS and Lexus LS. Sato says the LC contains “Some of the flavour of we want to share in other models”. 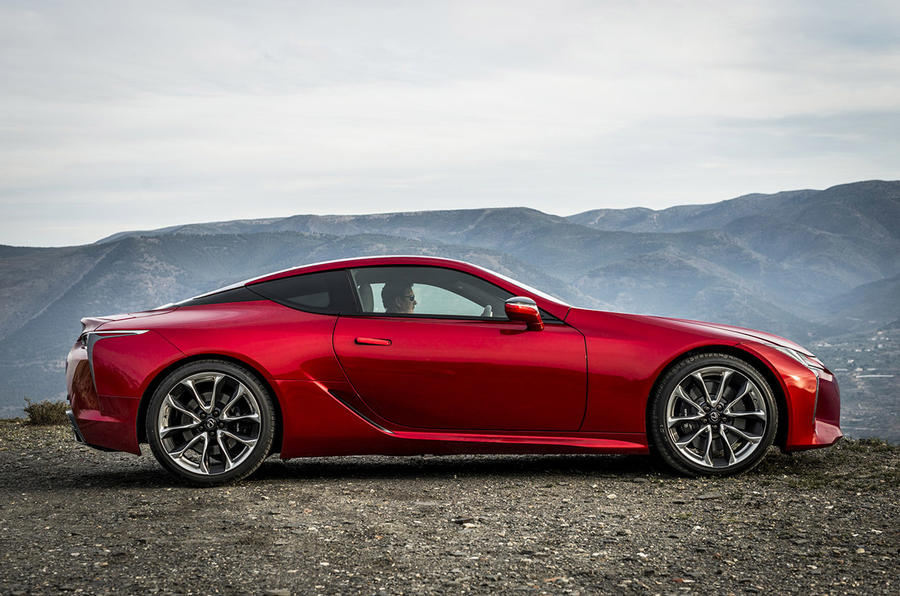 Development of the platform began shortly before the LC500, but underpinnings were created from the outset with dynamic capability in mind. Sato-san refers to the “inertia spec” of the car, by which he means getting the centre of gravity as low as possible by placing the engine lower and as far back as possible within the car, moving the front axle forward to reduce the overhang and also seating the occupants as low as possible. Even the 12-volt battery has found a home in the boot to enhance the weight distribution.

“The new platform gives us wider capabilities of design and performance. It’s on the top level in this class and can help us to create a more natural vehicle behaviour, so when you turn, the steering feels is more linear,” he says.

When it came to the LC500’s body, Lexus relied in part to some inspiration from the carbonfibre masterpiece that is the LFA. Although the LC500 is constructed from a mix of materials including high-tensile steel and aluminium, it still retains carbonfibre for some parts, such as the inner door structure and boot floor. 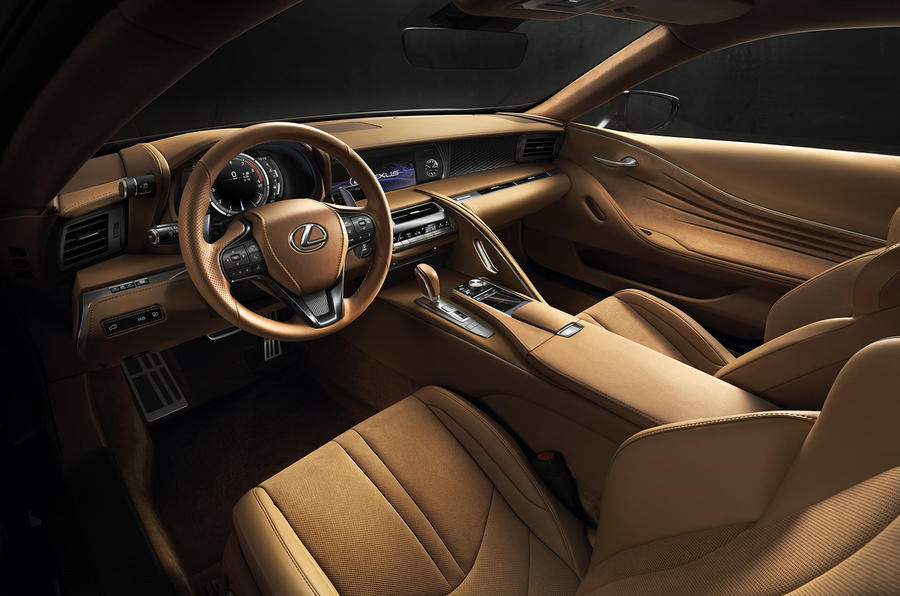 The LFA is also a source of inspiration for the noise that the LC500 makes, which is something of a surprise given that the former was powered by a V10 and the latter uses a V8. But Sato-san says the two cars share “the same philosophy” of engine sounds.

“Of course the V10 and V8 are different, but we learned a lot from the LFA, we are doing the same thing with LC to create harmony in terms of tuning the sound,” he says.

Lexus has included a sound generator to ‘enhance’ the engine’s tone. The exhaust also features sound control valves to alter volume and tone depending on the driving scenario.

Why we were blown away by the mighty Lexus LFA

The LC500 will feature a single-clutch ten-speed automatic gearbox, with Lexus one of several manufacturers planning to incorporate such transmissions in to their vehicles. While it’s possible to see fuel efficiency benefits from ten gears, Sato is more focused on creating a ‘rhythm’ to the cog shifts that’s appealing to the driver.

“I’m not really interested in this transmission being a world first because that has little meaning for the customer,” says Sato. “The benefit for the customer is more about how you control the rhythm of gear changing.

“With a manual transmission you may create some rhythms. This ten-speed automatic transmission is really focusing on the rhythm. The second, third and four gears are very close, so you might feel a more connecting, more engaging rhythm. The shift speed is just 0.2sec when you are in ‘D’ range.”

The Aisin-produced ‘box doesn’t come with any penalties in terms of size or weight: “I’m very proud of our engineers and the way they worked to minimise the parts at the right weight so that we can realise this transmission. The shifting speed is the same as a dual-clutch transmission. With the big torque and the rhythm of the shifting, it is engaging,” says Sato. 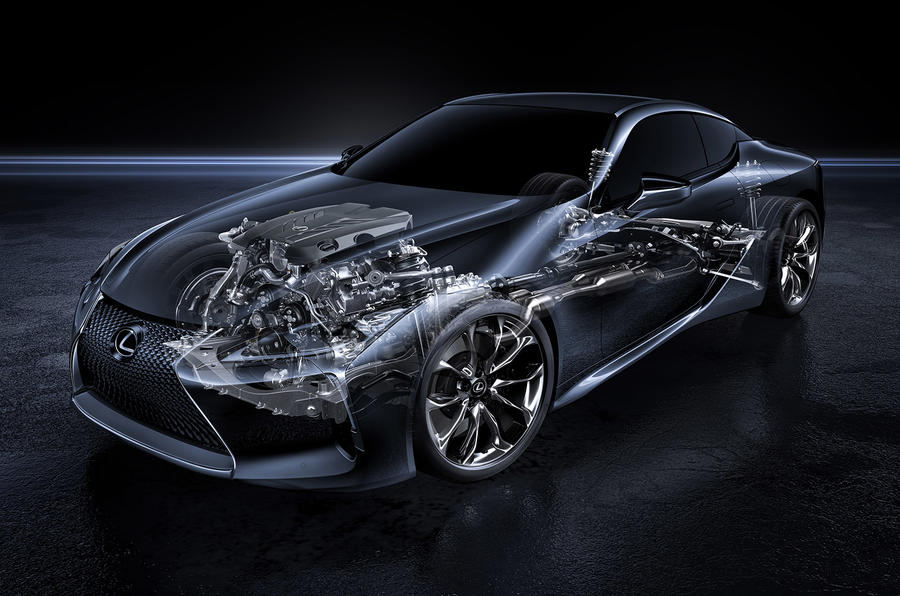 Sato says the second LC derivative, which is equipped with a new evolution of Lexus’s petrol-electric hybrid system that’s configured specifically for performance, will offer dramatically different driving characteristics and could be the one to go for “if you want to have a more sharp, precise drive”.

The Lexus LC500h marries a 3.5-litre V6 with an electric motor and lithium-ion battery pack. An additional four-speed automatic gearbox is mounted at the rear of the hybrid’s continuously variable transmission (CVT). Lexus claims a sub-five second sprint from 0-62mph for this derivative.

“The multi-stage hybrid and four-speed transmission enhances both the engine power and motor torque, and the system can create a better acceleration curve compared to the V8. The initial torque is bigger than the V8,” says Sato.

“With the previous hybrid system we had some criticism of the CVT’s ‘rubber band’ feel - the engine rpm goes up and it stays high. It’s not linked with speed. We have created a more natural vehicle behaviour, so when the acceleration goes up, the speed goes up. It is more connected with your expectations.”

Opinion: why the LC500h is the car that could redefine Lexus

Sato says the car hadn’t been honed on UK roads but there are plans for a final test here prior to the car’s launch. “The roads here are very good for building up the vehicle performance,” he explains. “We have especially been focusing on the handling response, so vehicle steers as you intend, in a more linear way.”

The LC500 has a broad remit, says Sato: “On one side you have the Porsche 911 and on the other you have cars such as the Maserati GT, Mercedes SL. The Jaguar F-type is there and the BMW 6 Series, which I think is in the middle. We don’t want to follow any particular vehicles. We will go our own way and provide something unique. If you look at the design, it is unique to Lexus.”

At Goodwood Toyota’s Le Mans drivers, including Britain’s Mike Conway, drove the car up the hill. Sato was happy with the response of the racers: “Their feedback was that it is very natural and easy to control because of the low centre of gravity. The vehicle’s behaviour is very natural.”

If the LC500 goes as well as it looks, it could give the Japanese car company’s fortunes a huge boost on a global scale. Already the excitement within the firm is palpable. It’s been described by Sato as “probably the greatest challenge since Lexus created the original LS” which launched the brand in 1989 and more than 4000 people have had an input into it. “This car gives a lot of energy to everyone at Lexus,” he says.

Hybrids have the same characteristics? That might make the nx less of a dud.
michael knight 9 October 2016

Looks like it's snapped in two. Designed by several dudes in different locations.
michael knight 9 October 2016

Looks like it's snapped in two. Designed by several dudes in different locations.
View all comments (13)