BACK TO ALL NEWS
Currently reading: 2017 Honda Civic on sale in March priced from £18,235
UP NEXT
MST Mk1: Is this the ultimate rally recreation?

Pricing and specifications for the 10th-generation Civic range have been revealed; the model has two new turbo petrol units and a hybrid is likely too
Open gallery
Close

At launch it comes with a choice of two new turbocharged petrol engines: a 1.0-litre three-cylinder with 127bhp and a 1.5-litre four-cylinder unit with 180bhp. Both are available with a six-speed manual gearbox or a CVT auto, and the smaller unit produces as little as 106g/km of CO2.

The entry version of the 10th-generation Civic is the S. It comes with the 1.0-litre and is mated to the manual gearbox. The most expensive model, the Prestige, comes with the 1.5-litre and, when using the optional CVT 'box, is priced from £27,480.

Between these two trims are five more levels - SE, SR, EX, Sport and Sport Plus. Metallic paint is offered as an option on all specs, priced at £525.

Click here to read our review of the 2017 Honda Civic 1.5 VTEC Turbo Sport 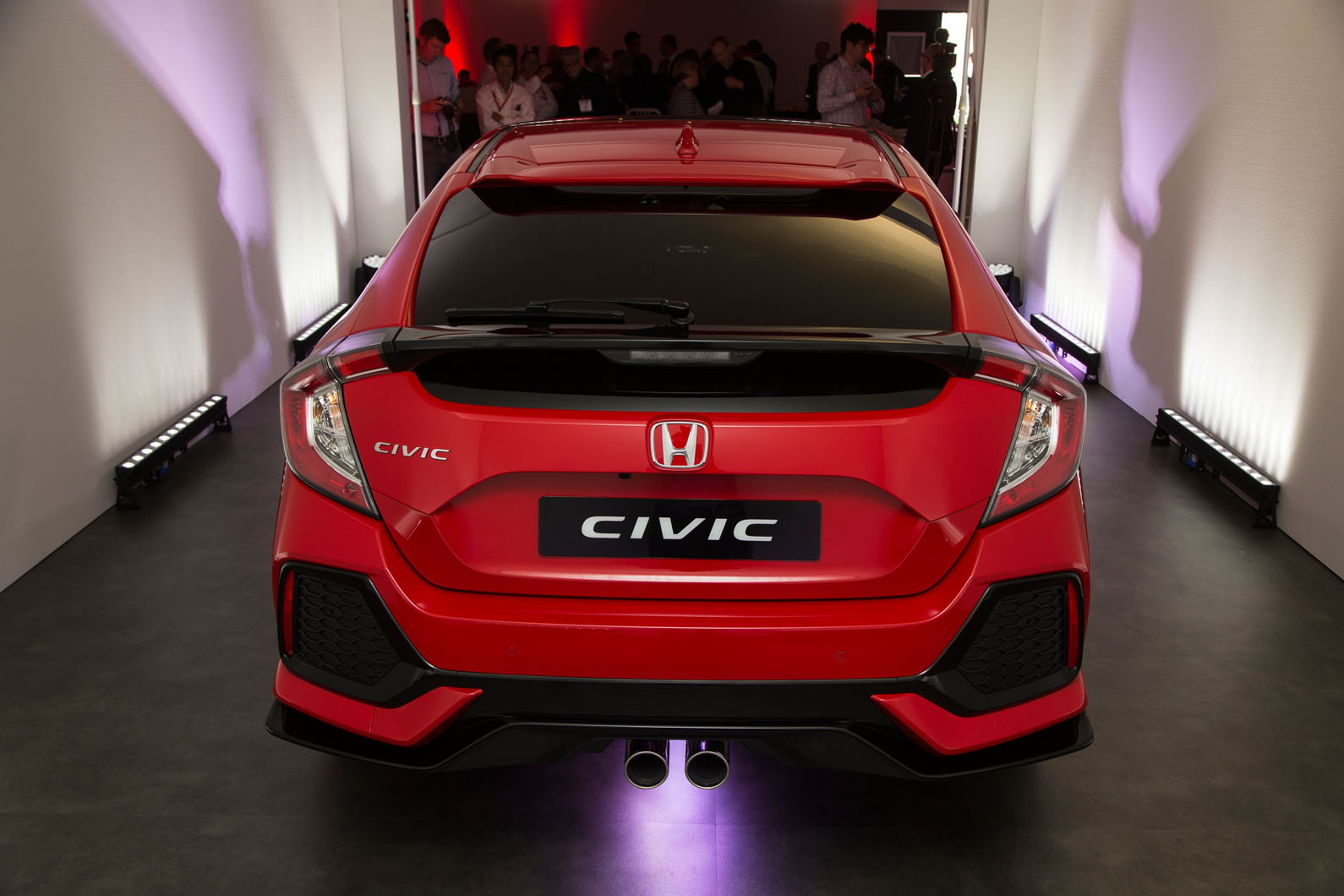 The 10th-generation Civic has been created to “fight back”, according to Civic project boss Mitsuru Kiraya, who said at the Civic’s launch last year that the outgoing car is “too conservative for younger buyers”. He added: “Markets have changed since this generation, while rivals have improved their offerings.”

The car's image change appears to have helped it improve residual value estimates by 9% compared with the previous car. Industry expert CAP forecast that the new Civic will hold up to 37% of its value after 36 months and 60,000 miles.

The next Honda Civic Type R has been previewed in a concept. Click here for more

The five-door hatchback will be followed by a new Civic Tourer estate and Type R hot hatch. However, the saloon and three-door variants, built primarily for the US market, won’t be offered in the UK. The current estate accounts for 20% of Civic sales and the Type R, a halo product for the brand, makes up 4%.

Like its predecessor, the new Civic will be built at Honda’s Swindon plant. The factory is the new global production hub for the Civic, with Honda confirming a £200 million investment in new production technologies and processes.

Previously, Swindon exported the hatch to Europe only. Now it will produce 40% of its Civic output for North America, 40% for Europe and 20% for the UK market.

These new processes include what Honda describes as a “high-efficiency joining technique”, where the entire inner frame is assembled first, followed by the outer frame and then the joints. This defies the conventional method of starting with body frame assembly. 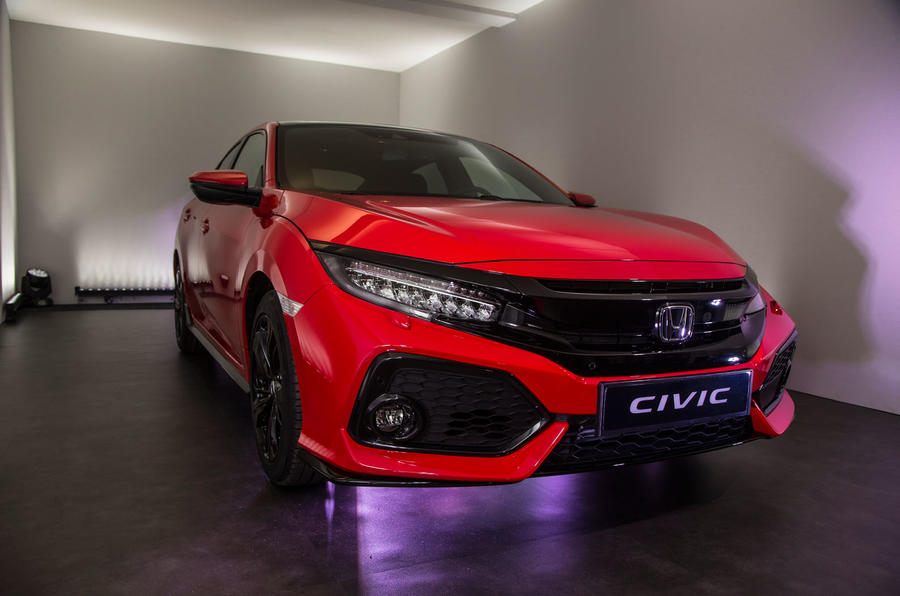 Honda says the method contributes to the overall stiffness of the body. It claims the new Civic has 52% greater torsional stiffness than its predecessor while being 16kg lighter.

This is achieved with the new ‘unibody’ platform that uses front and rear bulkhead rings, which encircle the interior cabin space, as well as cross braces in front of the engine bay and between the bases of the A and B-pillars to create further platform rigidity. 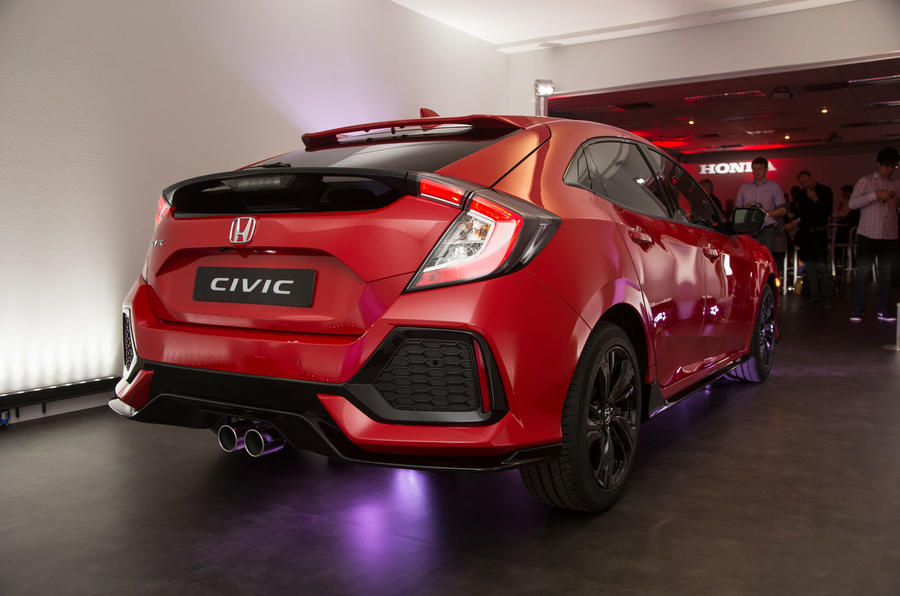 Engines for the new Civic

Alongside the two aforementioned petrol units, the old Civic's 118bhp 1.6-litre diesel option, which currently makes up 50% of UK sales, will be carried over but tuned to improve its power output and CO2 emissions.

A hybrid is also likely to arrive during the car's lifecycle with Kiraya confirming to Autocar that the new platform can accommodate such a powertrain. However, an all-electric Civic is not possible with this platform. "The platform was designed to have the possibility to incorporate electrification for hybrid," he said. "Full electric is not considered for this platform, just hybrid." 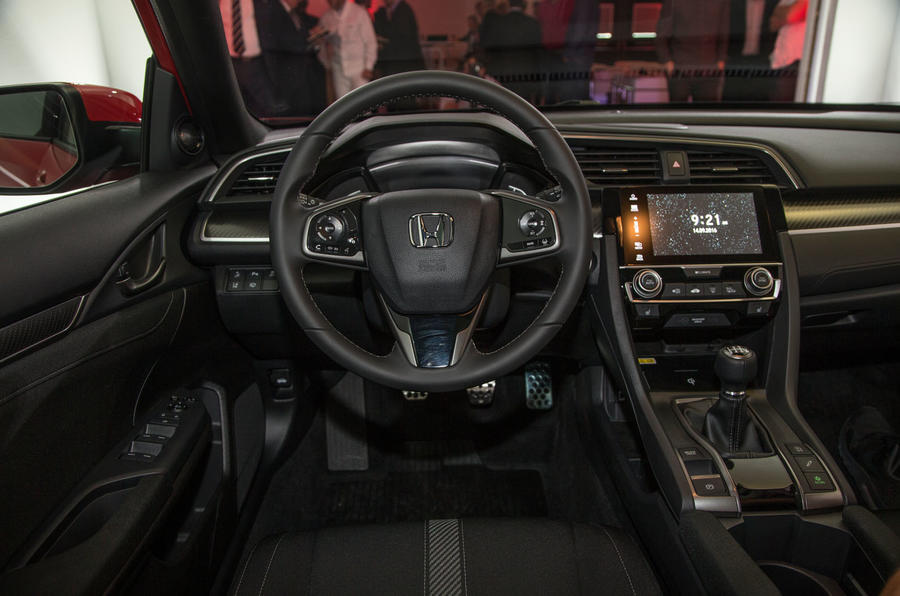 Honda has aimed for a simple and sleek cabin design, which incorporates a 7.0in touchscreen display on which you can access its second-generation Connect infotainment and connectivity systems, which integrate with both Apple CarPlay and Android Auto. There is also optional Garmin satellite navigation with free map updates for five years and different audio options, including a four-speaker, 160W system, an eight-speaker, 180W unit and a premium system with 11 speakers.

Interior space has improved, thanks to the longer wheelbase. Rear leg room has increased by a claimed 95mm and there’s more shoulder room in the front and rear. Boot space remains the same as before, at 478 litres, which is considerably more than the 360 litres of its Volkswagen Golf rival. Honda has ditched its socalled Magic Seats and instead reverted to a more traditional 60/40 rear seat split.

in all of the photos that I can forgive it for. They ruined the Jazz (not just looks but material quality). The NSX is glorious but I would rather they got all the bread and butter stuff right and built a hideous supercar than get it this way round. Mazda still showing the way in Japan.
Factczech 18 January 2017

Only a mother's love..

If this hideous offering was from the Ford stable, the motoring press would've gone to town in panning it, and rightly so... But as it is wearing a Honda badge the clamouring of so called motoring journos to sing its praise is troubling.... The car is ugly and not in the league of its nearest rivals when it comes to aesthetics, the fussy design is like, an effort from a boy racer from an Essex estate....
lambo1 18 January 2017

I have no doubt about the

I have no doubt about the excellence of Hondas engineering, but did they have to design such an ugly body?
Its quite possibly the ugliest car I have ever seen and that saying something.
The 2 previous hatchbacks were not as well engineered and had shocking suspension but at the least they were attractive..., but this...YUK!
View all comments (31)