BACK TO ALL NEWS
Currently reading: 2017 Honda Civic Type R to be launched at Geneva motor show
UP NEXT
Spending 48 hours touring in a Ferrari Roma

The next Type R hot hatchback will make its debut in production form next month; it was previewed with a concept last year
Open gallery
Close

The next Honda Civic Type R will be launched in production form at the Geneva motor show next month.

Previewed in concept form at last year's Paris motor show (pictured), the finished model will enter production at Honda's Swindon plant this summer, with sales expected to kick off in Britain in September.

The future model will be the first Type R sold in the US market, and is being built to set a new benchmark for front-wheel-drive performance cars.

A new Nürburgring lap record will be part of its target list, meaning the model will have to be faster than the current fastest front-driven car, the Volkswagen Golf GTI Clubsport S, and forthcoming rival, the 2018 Renault Mégane RS.

Honda kept technical details of the concept close to its chest at Paris, but Autocar understands that the Type-R will remain front-drive in a class that’s increasingly dominated by all-wheel drive models.

Honda will rely on the new Honda Civic’s wider chassis to improve grip and handling stability, along with a new aerodynamic package, including two rear spoilers and a front splitter.

"We have a lot more downforce from the design and aero package," the Type-R’s chief designer Daisuke Tsutamori told Autocar at Paris. Tsutamori’s design features an unusual front-end design with airflow into the engine bay split between three vents – a conventional lower vent, a narrow central grille and slot-like upper grille.

The area of the central grille is reduced by the Honda badge, but also functions as part of the Type-R’s ped-pro crash impact hardware.

Tsutamori stressed that the car shown at Paris was a prototype, but also admitted that "it was as close to the production car as possible". 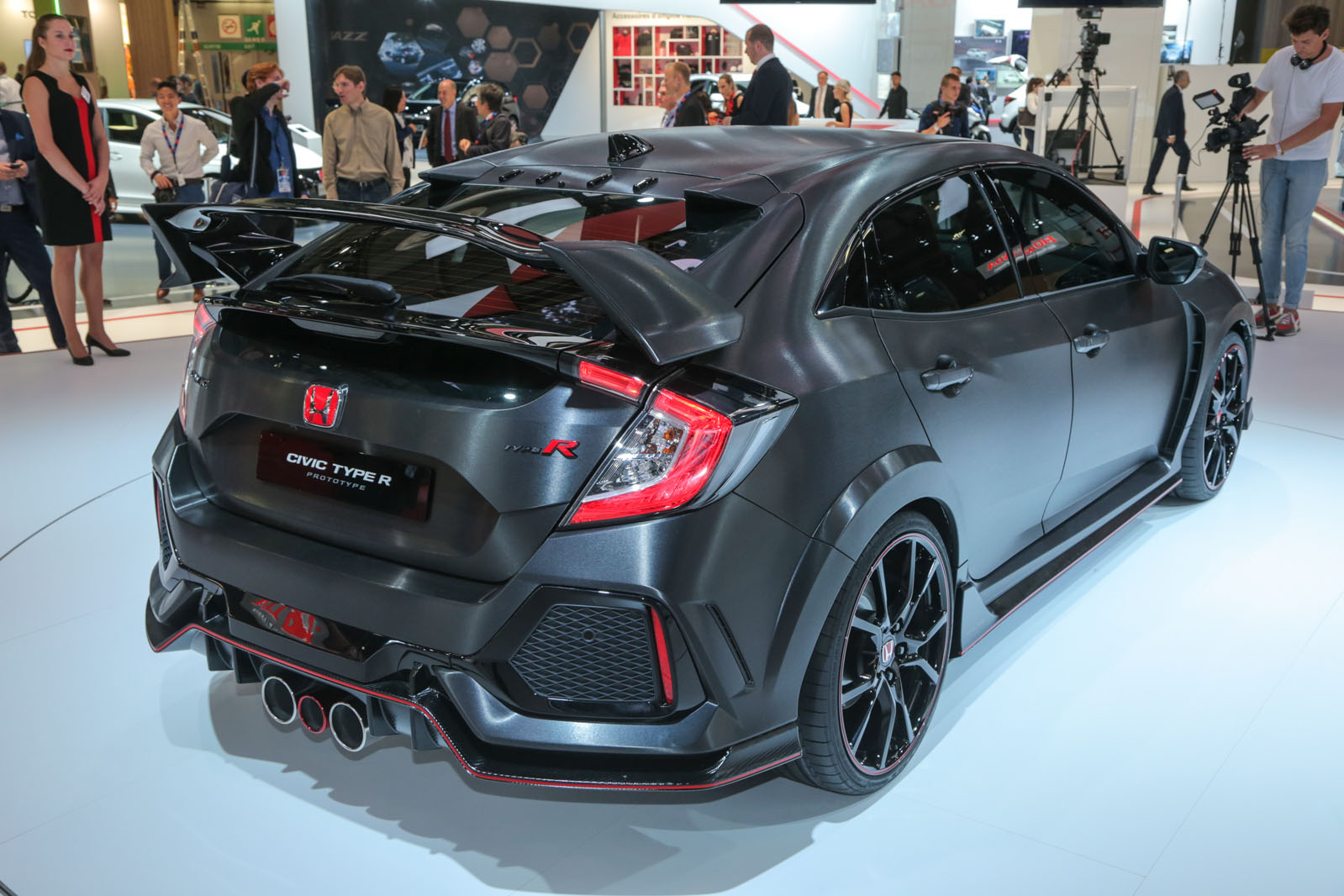 "The difference between the current Type-R and the new one is that the new one has been designed in from the start of the programme," said Honda’s UK managing director Phil Crossman.

As a result it can utilise the new Civic’s multi-link rear axle. The outgoing model had to be converted from the Civic’s standard twist-beam to a new multi-link, eating-up engineering time and resources.

Styling features on the concept include wider air vents than the regular Civic, smoked LED headlights and a new air intake on the bonnnet. New skirts made from carbon fibre help to give the car a more aggressive look, alongside 20in alloy wheels shod with Continental SportContact 6 tyres and flared wheel arches. At the back, there's a new fixed spoiler and three exhaust outlets.

Power is expected to rise, although the exact output remains unclear. One source said that the outgoing Civic, which features a 2.0-litre turbocharged petrol engine that produces 306bhp, represented the "absolute minimum" for the next car's performance. 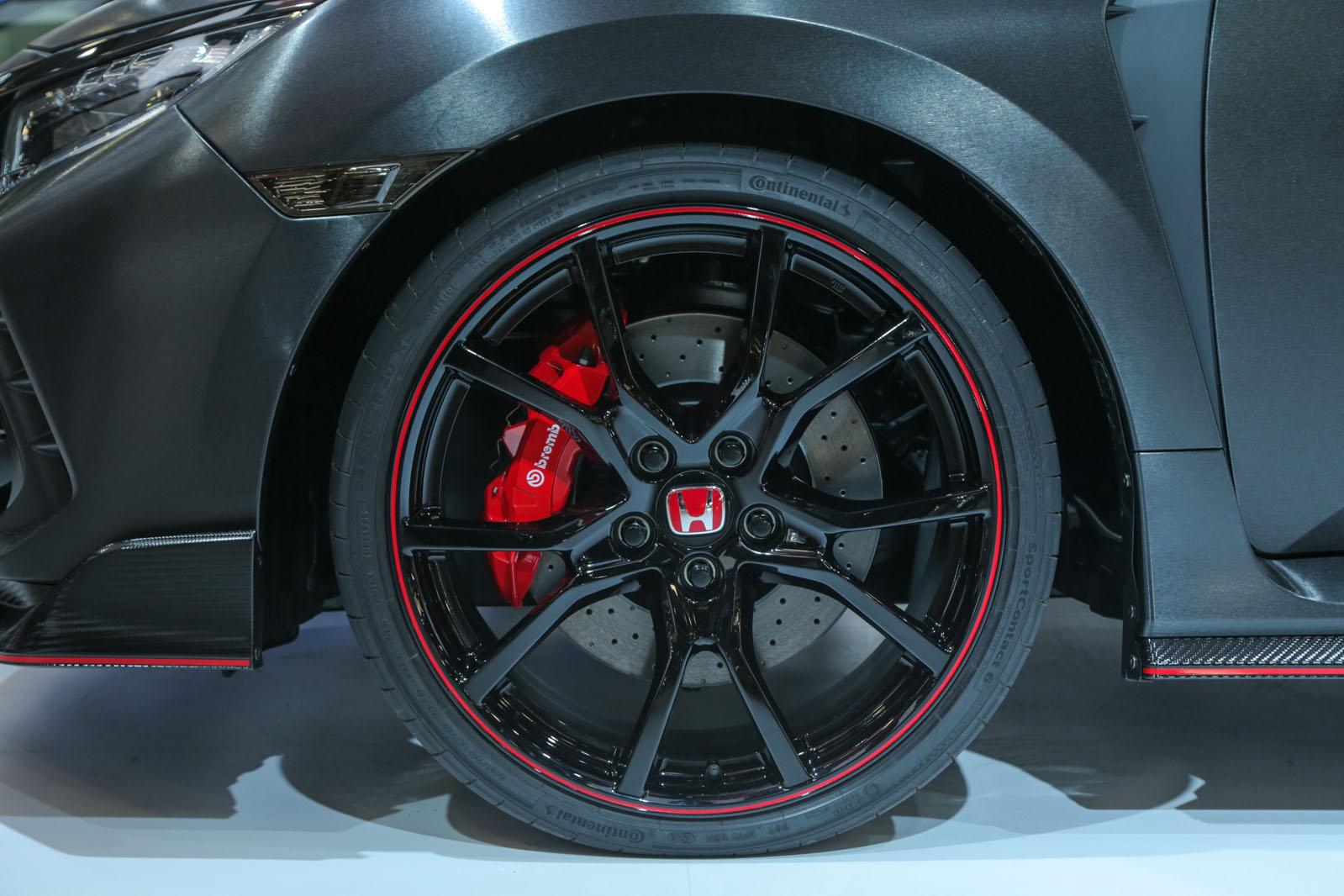 Honda says the future model will slightly increase on the current Type R's £30,000 starting price. It will be offered with a GT trim-level like the current car.

The current Civic Type R was launched in 2015, and competes against the Ford Focus RS, Audi RS3 Sportback, VW Golf R and Mercedes-AMG A45, all of which are all-wheel drive. A final Black Edition was recently launched.

Honda UK expect to sell around 1000 Type Rs a year – about the same as the outgoing Type-R. The current Type R, a halo product for Honda alongside the Honda NSX supercar, currently accounts for 4% of Civic sales.

How the fuck did cars get so ugly- particularly Jap cars, I have no doubt about the engineering excellence of this car but its SO UGLY- yuk! I wont even entertain being seen in something so vile looking
Peter Cavellini 17 February 2017

I don't know about the rest of us but,there's an overall look of the Focus RS about this type-R,i guess there are some who like this styling.
Dilly 17 February 2017

You can keep the contrived Styling. I'll take A new Golf R with a revised power output thank you very much. I bet this car is fun on a rainy day in blighty )not)
View all comments (14)