BACK TO ALL NEWS
Currently reading: 2017 Ford Fiesta - pricing announced
UP NEXT
New Ora Funky Cat touches down at £30,495 with 193-mile range

The seventh-generation Ford Fiesta will be priced from £12,715 when it goes on sale in the Spring.

For that price, you get a three-door Style model, while best-selling Zetec trim starts at £14,215 and top-spec Vignale gets a £19,345 pricetag.

Those prices keep the Fiesta – which is the best selling car in the country – competitive with its supermini rivals. The Volkswagen Polo starts at just under £12,000 but is about to be replaced while the Vauxhall Corsa remains a budget alternative to the Fiesta, with prices starting from £10,500.

Luxurious Vignale trim pushes the Fiesta against high-spec versions of premium rivals like the Audi A1 and the Mini hatchback, which both start around the £14,500 mark for entry-level models. 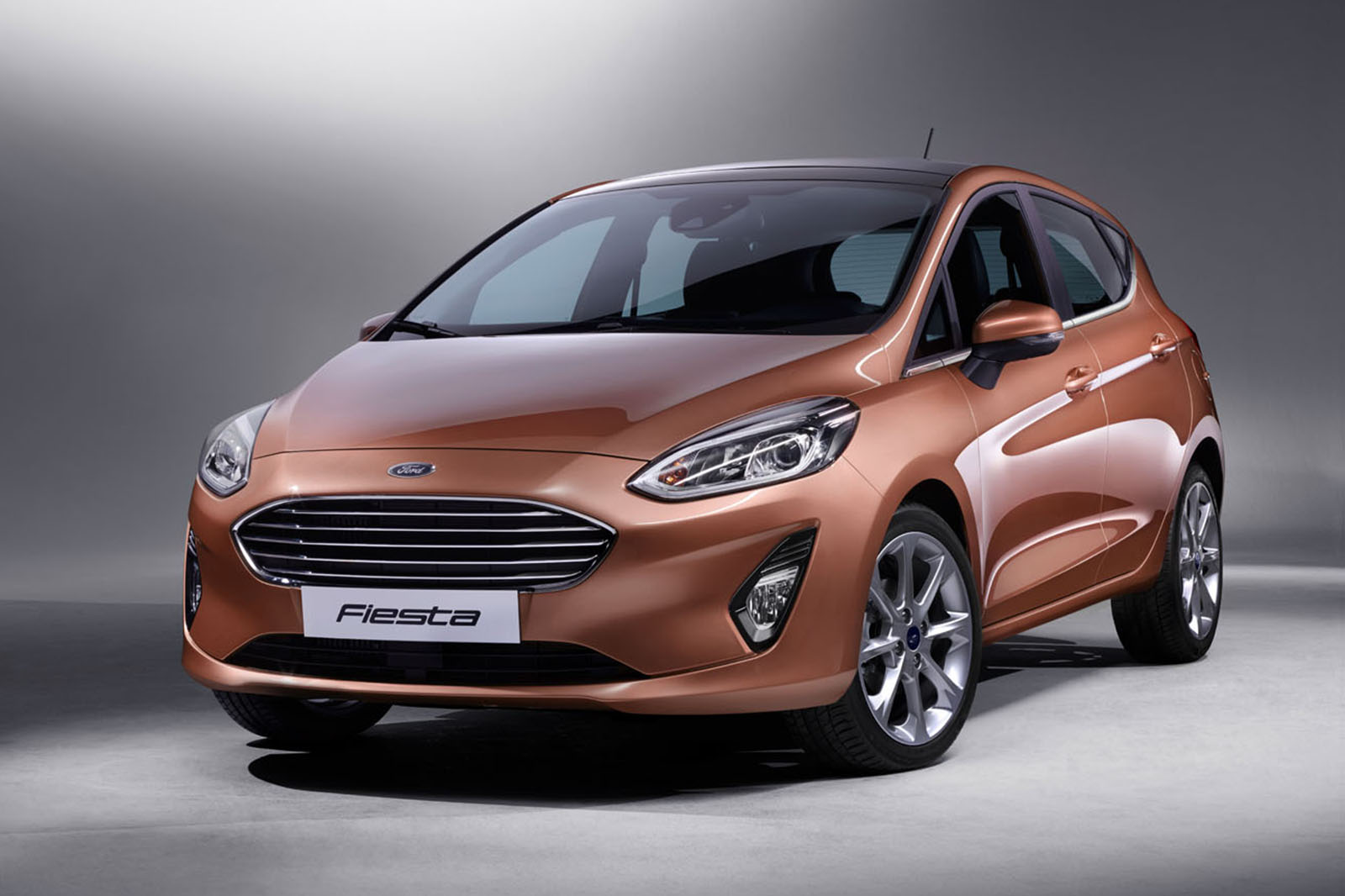 The Fiesta will also be available with a new Fiesta Active model that tackles the current crossover trend, and pricing will be announced at a later date.

Luxurious Vignale trim joins the range, complete with quilted leather seats and an extensive range of kit, in order to address the growing popularity of higher-end trim levels.

The Fiesta’s styling has changed dramatically over the years, but Ford has taken an evolutionary approach with this seventh-generation model.

Eight years into its life, the current Fiesta remains the UK’s best-selling car. Referring to the less than dramatic departure in design for the new model, a Ford insider said: “It works for Volkswagen with the Volkswagen Golf.”

As such, the new car is instantly recognisable as a Fiesta, although it does have a broader grille and slimmer headlights than the current model, along with horizontal rather than vertical tail-lights, in an effort to make it appear wider and more grown-up. 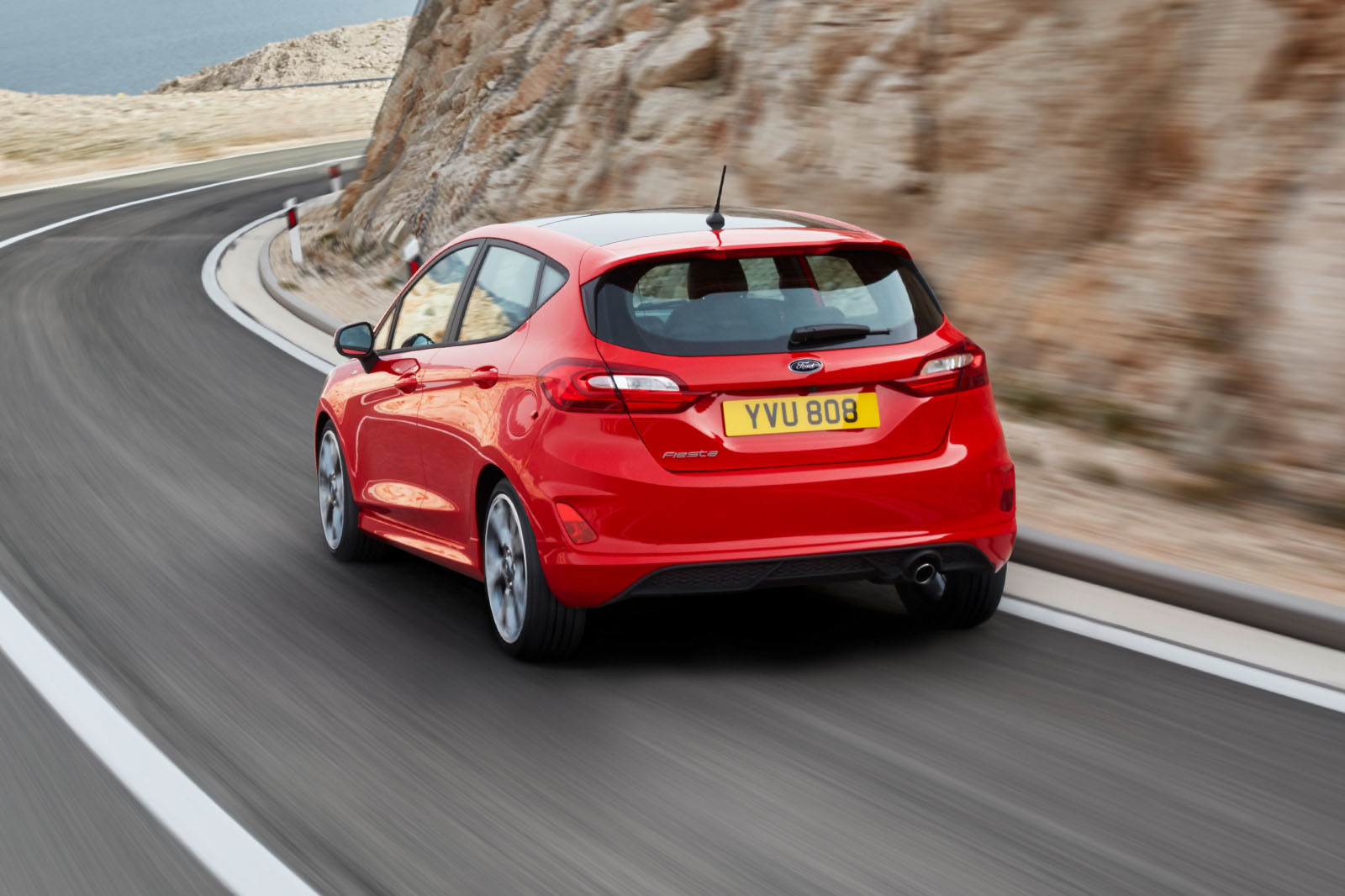 Alongside the Active and Vignale specifications, those who want a sportier look will still be able to specify an ST Line trim, which brings bespoke alloy wheels, a more aggressive grille and side skirts, sports seats, a flat-bottomed steering wheel and sports suspension.

The front track width has been increased by 30mm and the rear by 10mm, so the suspension geometry can be optimised for larger, 18in wheels. There’s also a lighter, stiffer front anti-roll bar that’s said to contribute to better roll control and more steering feel, and torsional stiffness has been increased by 15%.

Overall, the aim was to retain the current handling balance and improve the ride of what is already one of the most comfortable cars of its kind and the benchmark for driving fun in the supermini class. Only the sportier models feel firm, particularly the ST hot hatch. 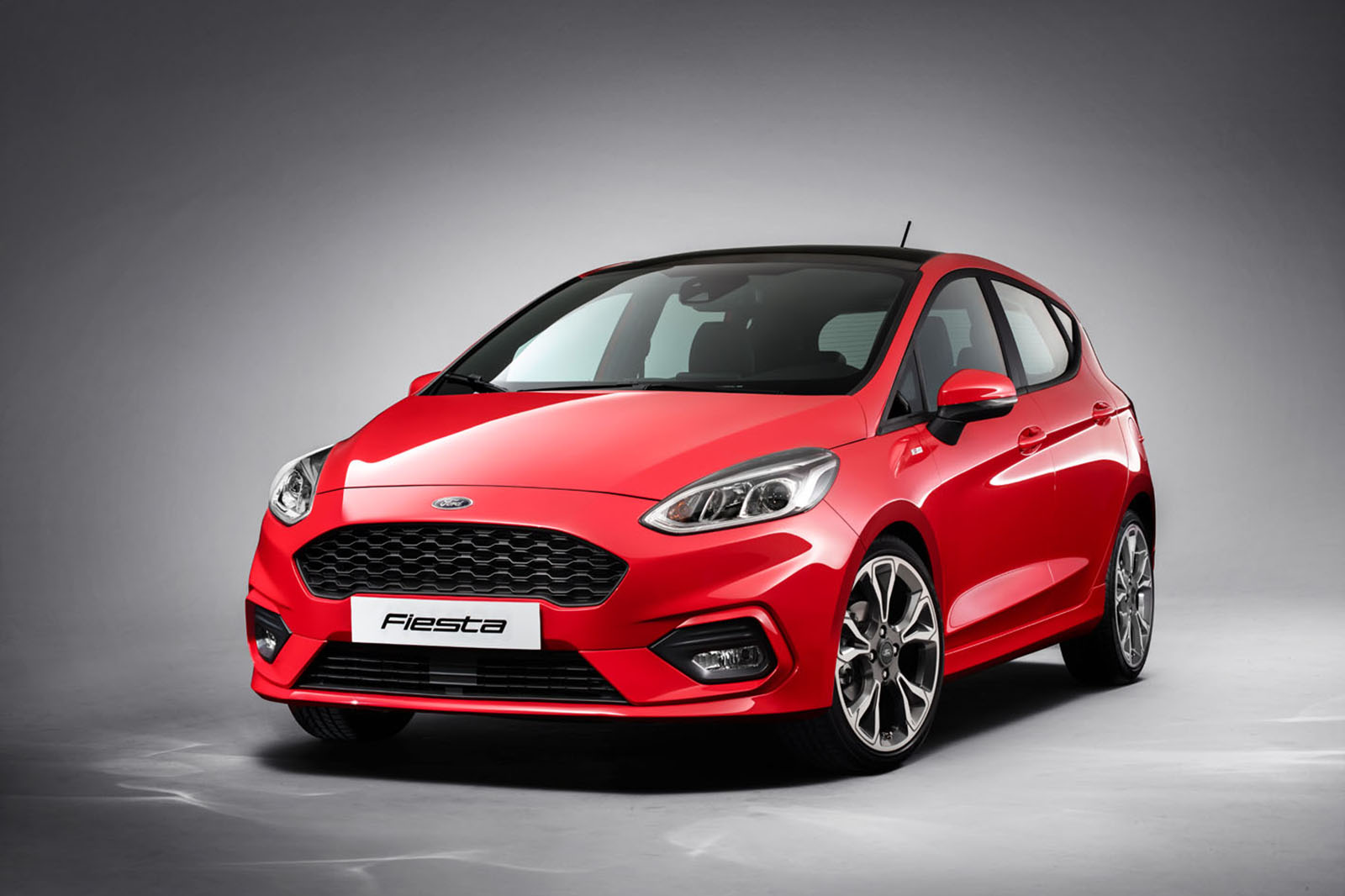 The ST won’t be replaced until 2018, but when it does appear it will have more dramatic looks than today’s car in an effort to help it stand out from the cheaper and slower ST Line cars that will be available from launch. The hot ST is likely to use an updated version of the current car’s turbocharged 1.6-litre engine, although power is expected to be hiked from today’s 197bhp on overboost.

Until the arrival of the full-blown ST model, the new Fiesta’s engines will all be small, frugal units, including a more efficient take on today’s 1.0-litre Ecoboost, which will be offered with 99bhp, 123bhp and 138bhp outputs, and a new, entry-level normally aspirated 1.1-litre three-cylinder petrol, available with 69bhp or 84bhp.

In its most frugal form, this new engine is expected to emit just 98g/km of CO2, although the 94bhp 1.5-litre diesel will remain the most efficient engine in the range, with CO2 emissions as low as 82g/km. 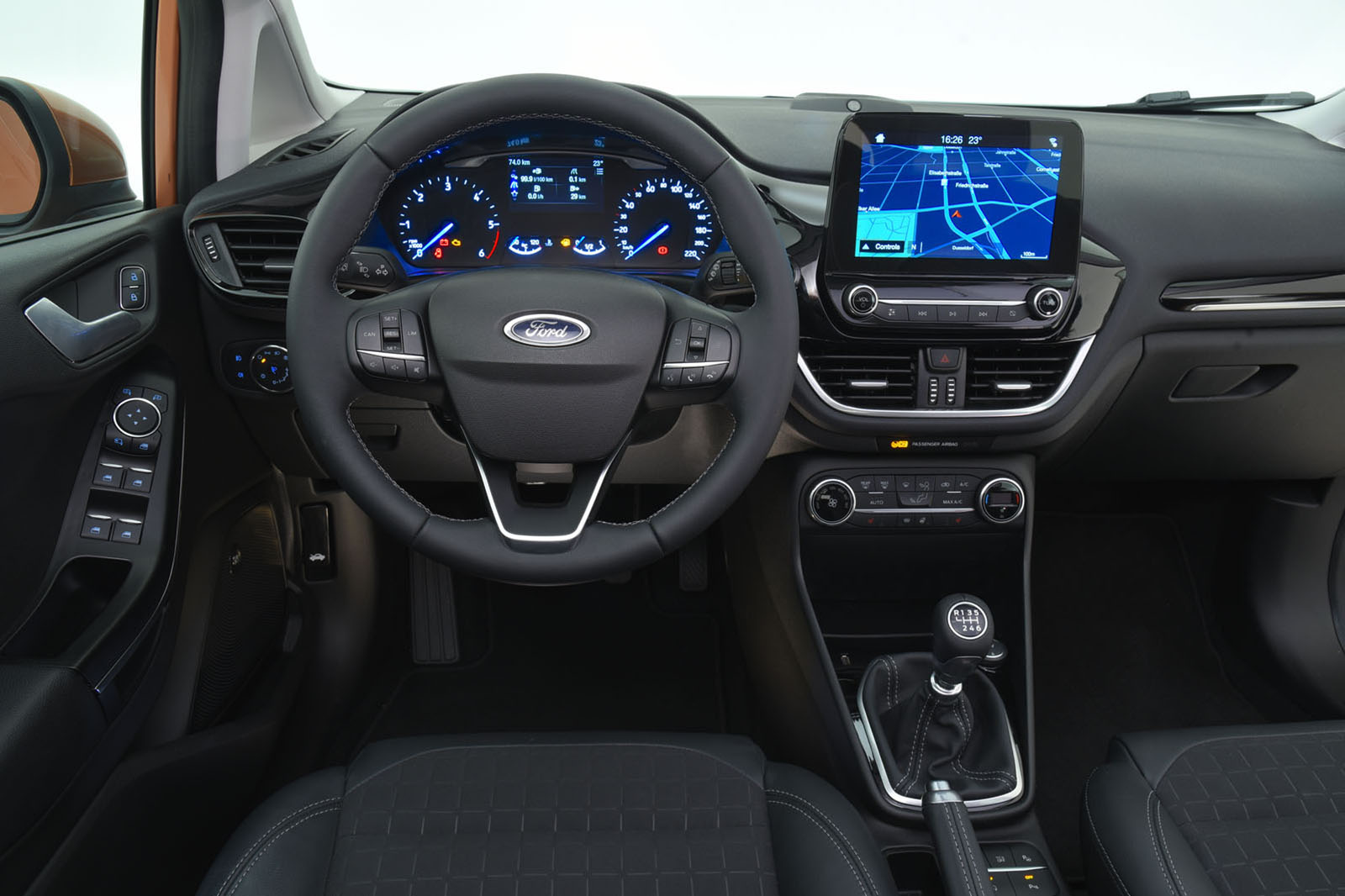 Inside the new Fiesta, Ford has opted for a complete overhaul. Gone is the buttonheavy dashboard of today’s model, replaced instead by simple rotary temperature controls and a ‘floating’ touchscreen infotainment display (6.5in on lesser trims and 8.0in on Titanium and Vignale models).

The screen features big, clearly marked icons and is placed high up on the dash and in line with the instruments in order to minimise time spent looking away from the road when changing radio stations or adjusting the car’s settings.

In addition, the screen allows the sort of pinch and swipe gestures used to operate a smartphone. Alternatively, the infotainment system can be operated using simple, conversational voice commands, although this is likely to be a cost option on most models.

Perceived interior quality is much improved, too. The plastics are now as plush as those in a Mini or a Volkswagen Polo, while a semi-translucent piano black insert stretches all the way from the instrument binnacle to the centre console and is made in one piece so there are no unsightly shut lines.

The new Fiesta isn’t much bigger than today’s car. The rear seats flop down onto the bases when folded and there’s no adjustable boot floor to making loading and unloading easier. But the dashboard has been reshaped to free up more knee room, so four adults will be able to fit more comfortably inside the car.

There won’t be any budget versions of the new Fiesta, because Ford wants to leave room below it for the cheaper Ka+ model, which was introduced earlier this year. 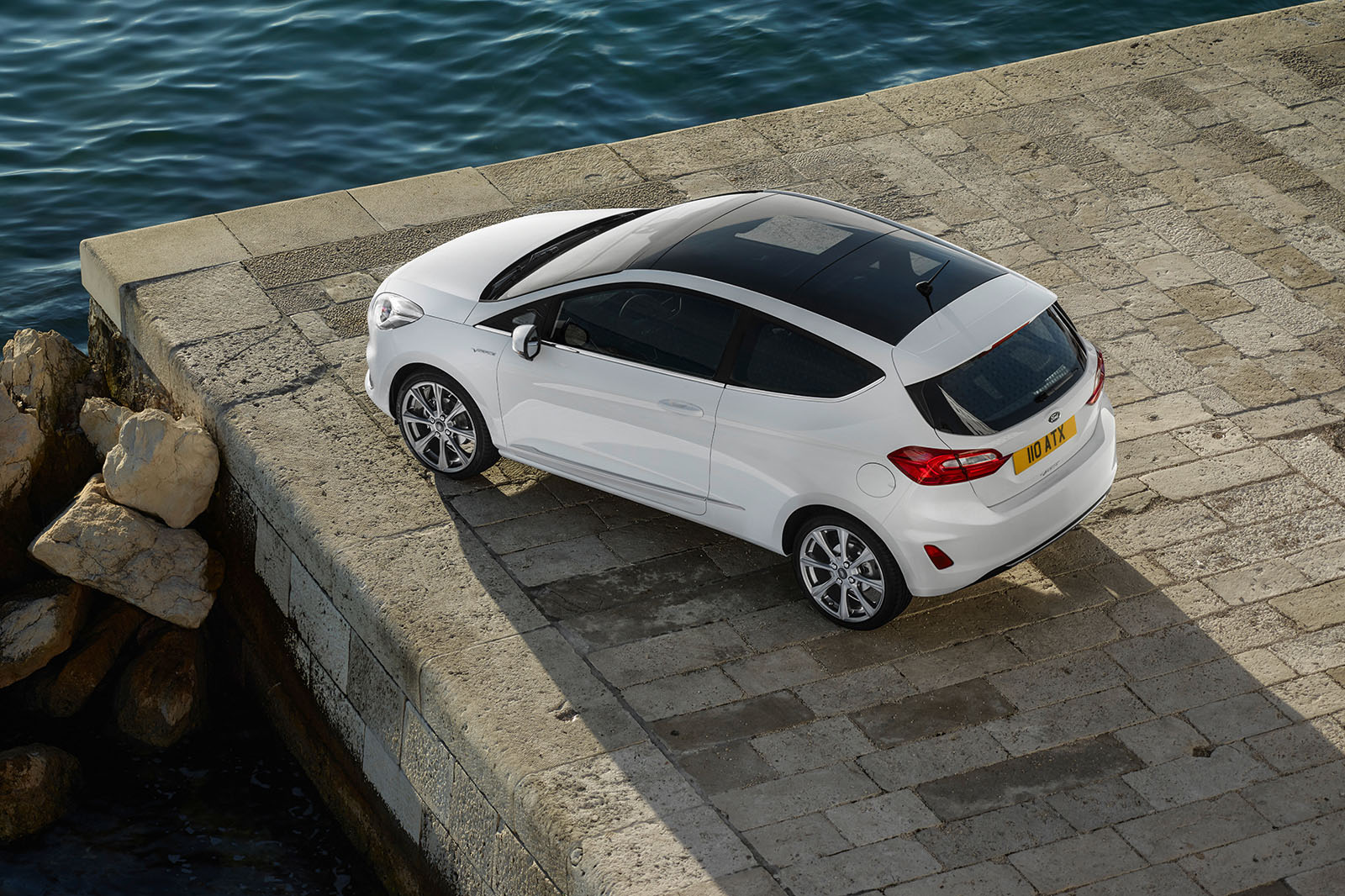 The new Fiesta will also be the first Ford available with the latest version of the company’s autonomous city braking system, which can not only prevent a collision with the car in front but also detect pedestrians on or near the road, even at night.

Additionally, the outer rear seats now feature seatbelt load limiters and pre-tensioners — previously fitted only to the front seats — to help prevent injuries in an accident.

Along with the upgraded safety kit, there’s the option of a B&O Play premium stereo system with 10 speakers, including a boot-mounted subwoofer and a central mid-range speaker sited on top of the dashboard.

Speaking at the Fiesta's unveiling, Ford of Europe President Jim Farley said the company had "over-delivered" on the promises made four years ago - at the first Ford Go Further event - to streamline its business in Europe and to create new products and technologies.

Take a closer look at the new Fiesta with our video, below.

Or, to watch the Fiesta's full presentation, watch the video below.

The next turd in line

First off, credit where it's due, the dash does look less revolting than the previous one, though given that it's a Ford the tactility of it is certain to be equally abhorrent. Otherwise, it's the same repulsive lump as before, totally lacking in any redeeming qualities, and sold by shiftless, malicious dealers who ensure a thoroughly unpleasant ownership experience.
Beastie_Boy 1 December 2016

That would made the ST version quite expensive... Think I'll stick with my Polo GTI.
View all comments (17)