Vauxhall is preparing a mild facelift for its Mokka compact crossover, which is expected to go on sale at the beginning of next year.

These spy images reveal the revised Mokka will get a significantly updated front end, with a new grille and revised headlight clusters visible under this latest test mule's camouflage. A reprofiled front bumper is also expected, bringing the Mokka in like with more recent Vauxhall models such as the Corsa, Viva and Astra.

As well as its obvious exterior changes, Vauxhall is expected to lift the overall fit and finish of the Mokka's cabin as well as fitting its Intellilink infotainment system. The firm's new Onstar connectivity system will also be fitted on higher-end models.

Read what we made of the first generation Vauxhall Mokka

While the bulk of the Mokka's engine line-up is unlikely to change from today's car, new additions should include the new 104bhp 1.0-litre three-cylinder turbocharged petrol unit from the new Astra. Also in line to appear is a 1.4-litre turbocharged petrol, also featured in the new Astra, which produces 148bhp and 175lb ft and is capable of returning up to 55mpg.

Those new engines could help to address one of our main criciticms of the current Mokka - that some of its engines aren't as refined as those used by the competition. Mass-market rivals for the Mokka include the Renault Captur, Ford EcoSport and Skoda Yeti.

Prices are expected to rise only slightly over the current Mokka, which costs from £16,684. 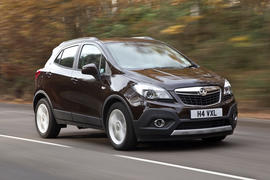 2 July 2015
And presumably the good NCAP results will be retained.

It is the same car, so yes,

It is the same car, so yes,

I had a Mokka as a hire car

7 December 2015
I had a Mokka as a hire car in Fueteventura. Did quite a bit of off road driving in it. I quite liked the car itself apart from the 1.4 140bhp engine. It was strained and not very free revving nor quick. At least they seem to have addressed this.