BACK TO ALL NEWS
Currently reading: 2015 Honda HR-V - prices, specs and launch date
UP NEXT
How the Bugatti Chiron became the first 300mph road car

Although similar in exterior dimensions to the Nissan Juke and Skoda Yeti, Honda says the new HR-V is targetting rivals in the class above, namely the Nissan Qashqai and Renault Kadjar. Unveiled at the Geneva motor show back in March, the HR-V is based on a modified version of the Jazz's platform. Honda bosses say the new model is aiming to bring traditional MPV practicality to the booming crossover SUV segment.

The petrol-powered HR-V, meanwhile, can return up to 52.3mpg with CO2 emissions of 125g/km when equipped with a CVT. Models equipped with a six-speed manual transmission return 49.6mpg and emit 134g/km of CO2. The HR-V will be available in two-wheel-drive form only in the UK, although four-wheel drive is offered in other markets.

Like the Jazz, the HR-V comes with Honda's 'magic seat' system which allows the second row seats' squabs to be folded upright or the whole seats folded totally flat. Interior space is also increased by the positioning of the fuel tank, which is located under the centre of the car. As a result of these two features, Honda reckons the HR-V will have class-leading cabin space. The claimed 470 litres of boot space - rising to 1533 litres with the rear seats down - is also better than the majority of rivals.

Masahide Kobayashi, chief stylist for the HR-V, told Autocar at the Paris motor show that the new model was designed to meet the “strong customer demand” for a crossover positioned below the CR-V.

He said: “The difficulty in designing this type of car is that because of the size, the design can end up looking weak or less premium compared with other models. During the scale modelling process, we also had difficulty creating a design with presence, but we are pleased with what we achieved.

"In many cases, Honda has good products, but the design has not been strong enough to be clearly recognised. We believe that we can create new and more exciting designs in the future. This model [the HR-V] definitely has a strong character and I am excited about seeing the reaction of [European] customers.”

Prices for the 2015 Honda HR-V, which is built in Mexico and imported into the UK, start at £17,995 for the 1.5-litre i-VTEC petrol in S trim, and rise to £24,945 for a top-spec diesel model. Honda says it expects the mid-range diesel HR-V to be the big seller in the UK, with diesel models set to account for 55% of total sales. In its first six months on sale, Honda wants to sell 5000 HR-Vs in this country.

Read our full review on the Honda HR-V

Find out more about the Honda HR-V with What Car's video, below. 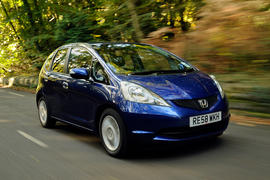 This has grown on me, and I think it's actually the first Honda I could see myself in as a 20-something. I couldn't cope with the Civic's dodgy styling and stupid rear window arrangement, the Civic Tourer would be too big, the Jazz is still too "sit up and beg" even with its new clothes, and then there's not much else in the range since they did away with the CR-Z. This feels like it has a bit more to it, and yet it's still got that impressive practicality (how useful that would be to me remains to be seen). Will definitely give it a look when it comes out over here though.
Chris C 18 February 2015

No 4wd in the UK? Why does Honda UK keep scoring own goals with its marketing policy? Suzuki Vitara for me then....
src 18 February 2015

What happened to 4WD and

What happened to 4WD and Hybrid models.
View all comments (21)