BACK TO ALL NEWS
Currently reading: The Silverstone Experience: A tour of the F1 track's museum
UP NEXT
New 2022 BMW i7: official shots show electric 7 Series testing

The Silverstone Experience: A tour of the F1 track's museum

A new interactive museum tells the story of Silverstone in a creative and engaging way. We take a two-hour tour and reckon you’ll need double that to do it justice
Open gallery
Close
Share story

It has always been clear that Silverstone, the UK’s only official Formula 1 venue, has an extremely proud history. You can’t claim to be the ‘home of British motorsport’ without an attention-grabbing backstory.

A few racing enthusiasts can just about recall seeing, in the very back of their motorsport memories, a few hazy black and white photos from Silverstone’s first race meeting of 1948, showing legendary drivers like Giuseppe ‘Nino’ Farina, Louis Chiron and Duncan Hamilton racing battered but beautiful pre-war single-seaters on a wide open airfield, its rudimentary circuit marked out in hay bales, dented oil drums and black lines of rubber.

Until recently, Silverstone had no one to tell its wonderful story. The modern circuit’s management was justifiably preoccupied with staging race meetings, rally schools, track days and off-road driving courses, multiple events scheduled on every day of the year but one. And in recent years, Silverstone has expanded to encompass an industrial estate and even its own university technical college (UTC), which uses the racing environment to inspire students to follow science, technology, engineering and mathematics careers. 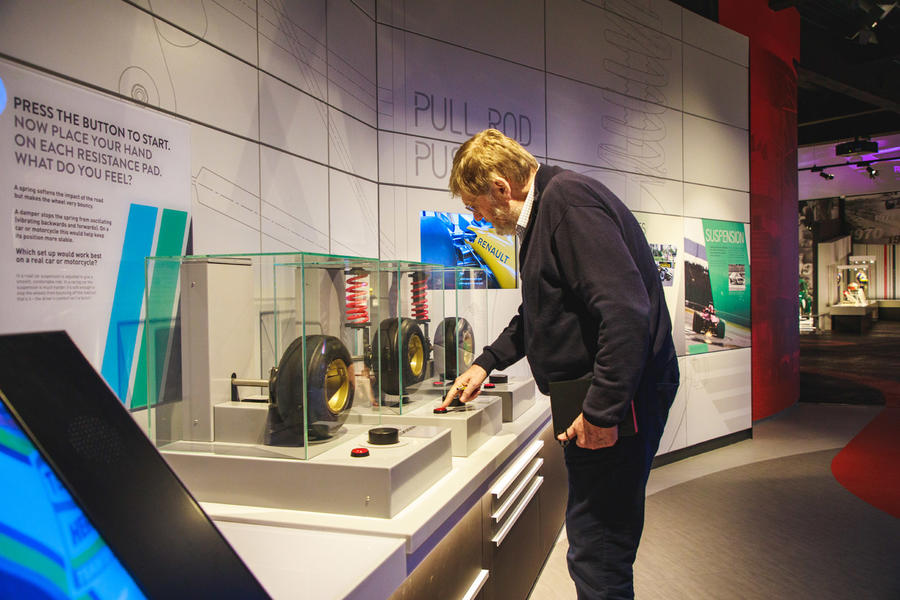 Now, however, the detailed history of the UK’s premier circuit can be followed at The Silverstone Experience, a huge interactive museum near the circuit’s main entrance, designed to be as much a drawcard for knowledgeable race enthusiasts as for race attendees, drop-in visitors and schoolkids.

The Experience’s primary aim reinforces that of the nearby UTC: to awaken students to the fascination of science and technology, a claim made abundantly clear when it was officially opened a few weeks ago by the Duke of Sussex. The ceremony consisted of four short and heartfelt speeches – from the head of the National Lottery Heritage Fund (who provided £9.1 million of the £22m-odd invested), The Silverstone Experience CEO Sally Reynolds, six-times F1 world champion Lewis Hamilton (who handed over one of his race helmets) and Prince Harry.

It was an especially great day for Reynolds, who joined the embryo project from Legoland in 2011, fronted the various bids for lottery funding, encouraged other big-scale donations, negotiated endlessly with circuit owners, planners and local authorities, survived two episodes when it looked as though the whole project would collapse and finally brought it to fruition.

Weirdly, because details of royal events aren’t published beforehand, we were trying to contact Reynolds by phone at the precise moment Prince Harry was bearing his scissors to cut the red ribbon, as it were. When the dignitaries departed, we did manage to make an appointment and presented ourselves at a sodden Silverstone a couple of days later to be met by Reynolds in the Experience’s spacious ground-floor coffee shop, a haunt most visitors are going to find hard to resist.

As you approach the Experience from the nearest car park, to the left of Silverstone’s main entrance road, you wonder two things: a) why you hadn’t noticed this enormous, imposing building before; and b) whether all of the enclosed space, 4000 square metres of it, is to be taken up by the museum. 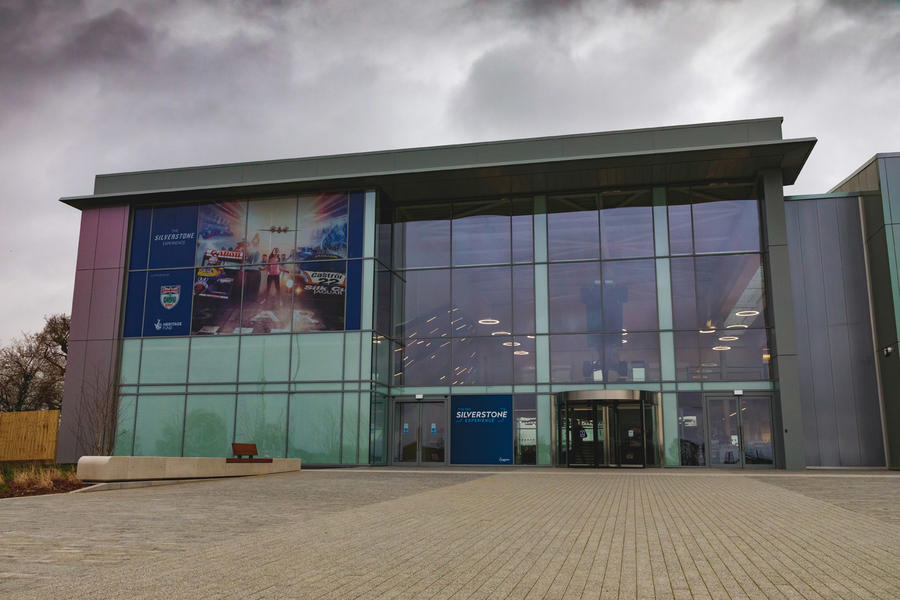 The first answer’s easy: the building wasn’t imposing before. It was big, ramshackle and ugly, a steel-framed former World War II aircraft hangar erected 70 years ago to house Wellington bombers that subsequently flew out of both the former wartime Silverstone training airfield on this site and Turweston, its twin a couple of miles away. When racing began in 1948, this venerable structure did at least provide the names of Hangar Straight and Wellington Straight, and still does.

The hangar was meant to be temporary but, after 70 years, it was found to be mainly sound, albeit with some weirdly man-made corrosion problems in its corners (use your imagination). Once a huge central steel truss had been expensively replaced, it was structurally ready to be re-clad outside and refitted within. As for space, the generous scale of the exhibits – on several levels – is very clear once you climb the stairs that begin your journey through the exhibits. From the top, you look down on a true panorama of cars, heroes, massive images, maps, all manner of video-based interactive exhibits, the heads of various living, breathing and very helpful volunteers and, above all, space. It stretches to the building’s very extremities.

However, Reynolds chose to meet us in the ground-floor coffee shop because through its glazed wall is an initial view of the original track, and a grassy space intended for picnics. It is both historic and instantly inviting.

At the top of the entrance stairs, there’s a large landing that serves as a viewing gallery, instantly promising you an absorbing and detailed experience. The theory is that this curbs visitors’ tendency to rush their viewing to discover what’s next. Walk forward and you see a giant race circuit map, with explanations about how it has changed over the years and how famous corners and features got their names. 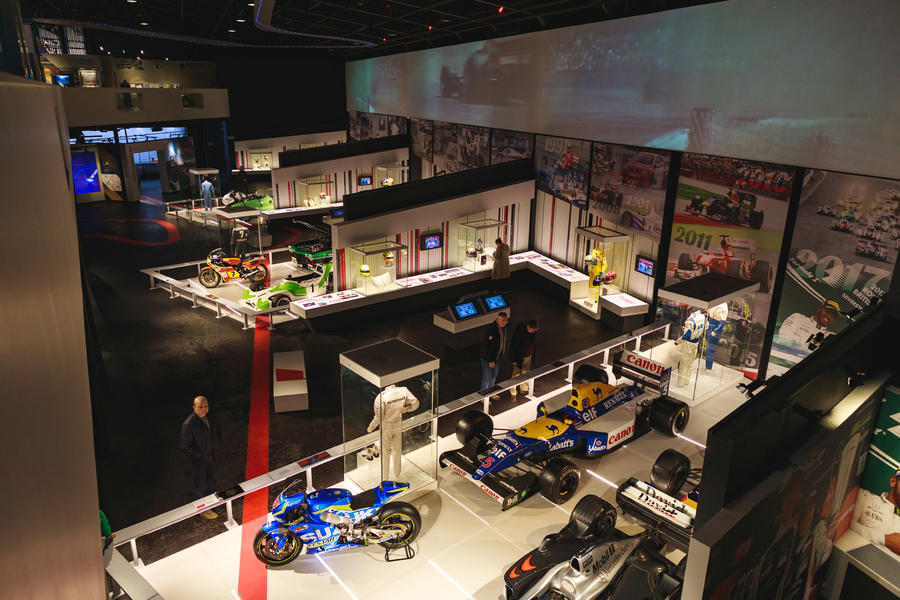 You rapidly learn about the ancient history of the area: about the medieval Luffield Priory (which provides names for both Luffield corner and Abbey curve) and about the dubious morals of the 11th-century monks who lived there. There’s even a priest’s hole to crawl into. The area was later comprehensively farmed and, by the 18th century, Silverstone had become a large holding (Stowe estate) before changing completely in 1942 to an airfield designed to train Wellington bomber pilots. The MoD still controlled the base in 1948 when racing began but allowed a one-year lease.

The glorious 70-year racing history of Silverstone is covered from start to finish once you walk down the stairs to the expansive ground floor. There are magnificent, historic cars and bikes, but this is not a car museum. Space is needed for too much other fascinating stuff and it surrounds you.

There’s a large video screen featuring Sir Jackie Stewart explaining how racing safety became a big issue and how it progressed. There’s much detail about how a race meeting runs – how marshals do their jobs, and a bank of screens showing real-time action on every corner. If inclined, you can even have a go at being a race commentator and there are hints from those who do it for a living.

One especially fascinating area is the Tech Lab, where experts from Suzuki and McLaren explain how suspension works, where you get to look inside engines and gearboxes, where an interactive display lets you feel the braking effort needed in an F1 car (versus an ordinary road car) and much more in the same vein. There’s a racing eras exhibition, which shows how much (and why) things have changed. And among the contemporary race gear is the crash helmet Hamilton wore to win his sixth world F1 title. 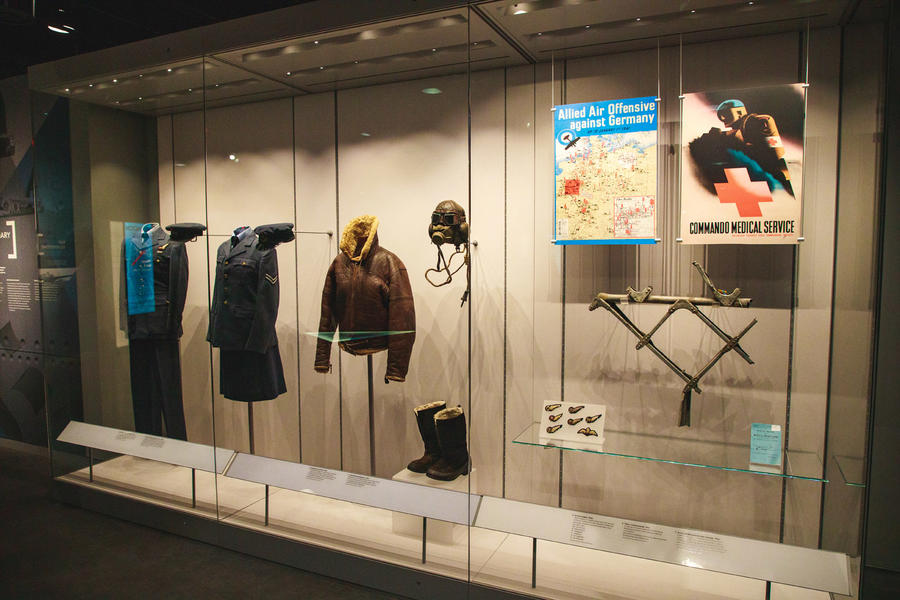 What with walking and talking, there was much I missed. I was there for only a couple of hours, during which it became obvious that a thorough visit would take twice that time, especially if you stopped and chatted to the knowledgeable and helpful museum volunteers, who really make the place percolate. It’s a magnificent facility, well judged for visitors of all ages and knowledge levels; the sort of place you’ll want to visit regularly.

Your exit from the museum is its most awe-inspiring interactive feature of all, a spectacular theatre experience during which you’re enveloped by a huge video wall that curves away to your sides and up over your head. You sit in a notional racing car and circulate – with appropriate noises – at racing speeds, while great Silverstone moments happen all around you. In one helping, this is a huge slice of Silverstone’s august racing history.

Truth to tell, I was so busy gripping the arms of my bucket seat that the only major incident I truly took in was the collision between Damon Hill and Michael Schumacher during the British Grand Prix of 1995, which allowed Johnny Herbert through to win. There were many more incidents and I feel rather foolish not to have seen more of them: as I say, an early return is a must.

Sir Stirling Moss obituary: The life and career of a racing legend