BACK TO ALL NEWS
Currently reading: Daniel Ricciardo: one-on-one with F1 star ahead of British GP
UP NEXT
New Volkswagen CEO Schafer to make brand "loved" again

Ricciardo talks about this season’s troubles, what he hopes to achieve before retiring and how he likes to detach himself from the motoring scene
Open gallery
Close
News
by %user:name
5 mins read
Share

Ahead of next weekend’s British Grand Prix at Silverstone, a number of drivers on the grid found themselves together in rather more relaxed circumstances at the Goodwood Festival of Speed.

It’s one of the few opportunities for today’s Formula 1 giants to drive the older crop of racing models, in the public eye, on a circuit alongside each other. This year, Daniel Ricciardo, fresh into his contract at Renault, had a chance to drive everything (in anger) from the firm’s hardcore new Mégane Trophy-R to the race-winning 2012 Renault-powered E20 F1 car.

In between his time at the wheel and being physically mobbed by fans of all ages, Autocar grabbed five minutes with Ricciardo to talk shop. 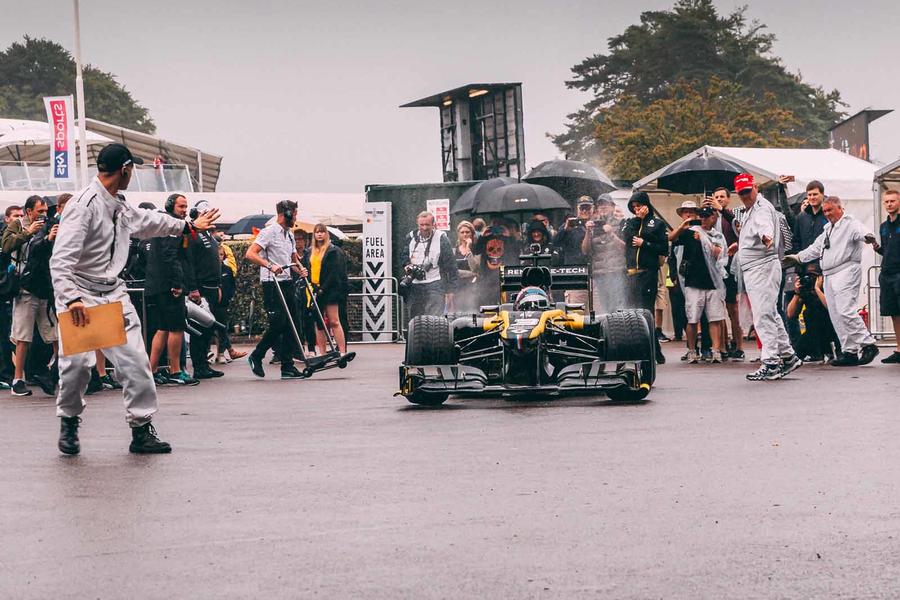 How are you feeling about tackling the hillclimb, in the rain, in a car you’re not that familiar with (the 2012 F1 car)?

"It’s actually easier now! I’d probably be more nervous if it was dry as I was going to put pressure on myself - I was tempted to scare myself a bit and go all out, so it’s probably safer this way."

It’s been a less-than-perfect season so far for Renault. Are you now thinking ahead to 2020, or do you have an idea of how to improve things now?

"I have not thought one bit about 2020. The season for me still feels like it's starting - I know we’ve done a lot of races now, but there’s still so much more for me and the team to deliver. To already think next year seems premature.

"We’ve definitely got an idea of what we need to be improving; unfortunately, when we tried to address those things with the upgrade in France, it didn’t seem to tackle all of them. We know what we’ve gotta do. Myself and Nico [Hülkenberg] are giving the same feedback on where we feel the car can be stronger and where the weaknesses lie. I think we’ve pinpointed it but executing it is taking a bit of time."

Are you looking forward to Silverstone this weekend?

"I really like Silverstone – hopefully it's not this weather. I don’t think I’ve actually turned a lap in the Renault F1 car in the rain yet. But Silverstone’s cool, I love the atmosphere. It’s a high-speed circuit so you really feel the downforce - that and Suzuka, those are the two tracks where you feel the aero most. And it’s like a festival atmosphere: rain, hail or shine, everyone seems to show up."

This year is your eighth in F1. Are you still in love with the sport despite everything?

"Absolutely. Like everything you have your days – especially in the last year [at Red Bull] some days I did hate it – but I do love it I’m still very motivated and optimistic. That hasn’t wavered over time."

Has there been any thoughts at all about what’s next for you?

"I’m just thinking about the now. A few years ago, I thought it would be cool to try some other races, but now I think the more involved I get in F1, the more I want out of it. I’m still yet to achieve ultimately what I want, which is a world title, so I’m going to put all my effort into that and I don’t really want to be sidetracked by anything else. I’m all in on it, and hopefully it works out."

Are you getting involved in the decision-making around the 2021 rule changes?

"Us drivers are definitely trying to have an input and I think we are now - the most that we’ve been together in a long time. I think it’s grown the last few years. It used to be quite separated; in the last three years, thanks to the GPDA [Grand Prix Drivers' Association] and all that, it’s got a lot better.

"I don’t think it’s gonna turn on its head, but I think we can definitely make some improvements. We all want the same thing, we want to be able to race harder and closer, and hopefully we can find a way."

So you’re happy with the direction Liberty Media is taking?

"They’re certainly open-minded – I think that helps. They’re happy to listen to us more than anything. They’re trying to understand the direction as well – it’s all new for them."

What about away from the track. Do you get any time to appreciate motoring and are you still a car nut?

"I’m pretty up and down with it. Some weekends off, I love to be far, far removed from racing – I don’t want to see a car. But then other times - I went for a drive last week and it was great. Sometimes I really just want to detach myself from it.

"I've got a couple of cars but I don’t have a massive collection. I do appreciate cars, and I’m starting to appreciate older cars – I just turned 30 so maybe that’s why."

Have you ever been asked to get involved in your own special edition of a production car? I’m thinking like Vettel and his Infiniti FX…

"I guess if the right opportunity came up would be cool. I haven’t really thought about it or had it discussed with me, but if something was put in front of me that I really like, I would definitely be open to it."

Goodwood Festival of Speed 2019: best of the F1 cars

Why Canadian GP controversy is good for F1

Peter, of all the people to

Peter, of all the people to criticise writing style...

What’s your penny worth?

Peter, of all the people to criticise writing style...

It read like a interview gotten by chance,wasn’t arranged, questions not written,an on the Hoof interview, good?, just about, what did you think of Daniels interview....?

That read like half an interview, also, it was either typed too quickly and words missed out, or Daniel does miss words out, but on the whole it was an enlightening article.