BACK TO ALL NEWS
Currently reading: Cupra e-Racer arrives as 671bhp electric touring car
UP NEXT
Fisker goes radical with Pear EV SUV

The battery powered e-Racer, which is set to compete in the e-TCR championship from 2021, promises a 0-62mph sprint in 3.2 seconds, from four electric motors producing a peak 671bhp and 708lb ft.

Based on the Volkswagen Group’s MQB Evo platform, the e-Racer will be capable of 169mph flat-out, and will use a 65Kwh liquid-cooled battery pack. It has been built to e-TCR standards, of which Cupra is a founding partner, though the series has yet to confirm specifics such as race distance. It is unclear how long the e-Racer will be able to race for before needing to recharge.

“Cupra has always had a pioneering role in motorsport and was the developer of the first TCR platform,” Cupra Racing Director Jaime Puig said. “With the Cupra Leon Competición and Cupra e-Racer we are continuing to break new ground.

“Both vehicles have been designed to compete at the highest level and bring a competitive edge to the teams running them, having been developed specifically to meet TCR and ETCR technical regulations and requirements.”

While it shares styling elements with the newly-revealed Leon road car, the e-Racer has a lower and wider stance, wider arches, and an aero-optimised front bumper designed specifically around the different cooling requirements of an EV. It also features a large rear wing, and a race-spec interior including roll cage. 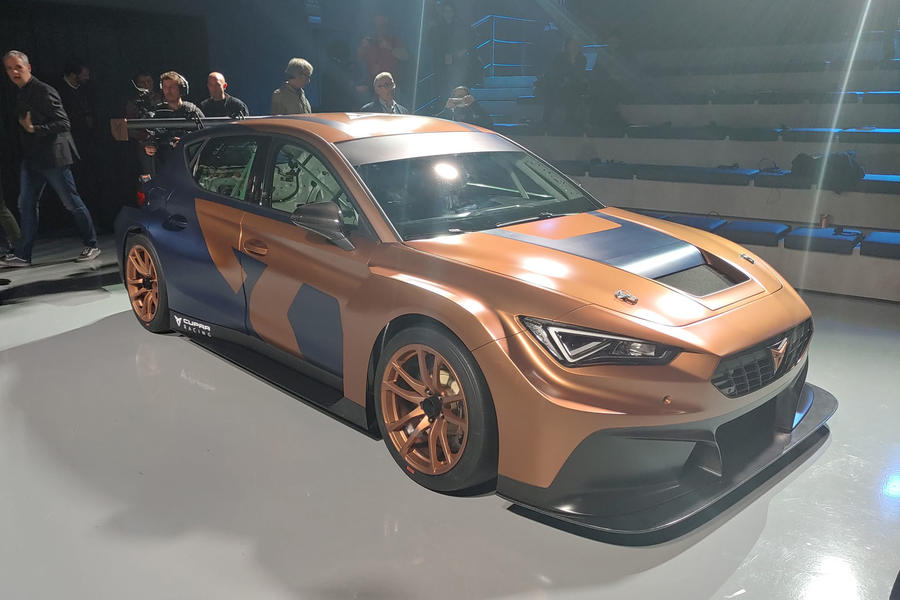 The Leon Competicion is more closely based on the road-going Leon, featuring revised bodywork, rear spoiler and bonnet scoop to aid engine cooling. It has a 2.0-litre turbocharged petrol powertrain that produces 335bhp and 302lb ft of torque, allowing for a 162mph top speed and 0-62mph in 4.5 seconds.

Can the pure-petrol hot hatch claim bragging rights over its Golf GTI stablemate?

It uses a six-speed sequential racing transmission and rides on fully adjustable MacPherson strut front and multi-link rear suspension, with front and rear rollbars that can be calibrated manually by racing teams.

Cupra plans to offer the Leon Competicion for online order, making it the first touring car to be sold in such a manner. The first customer cars are due to be delivered from April.

New Cupra Formentor hits the road ahead of mid-2020 debut