BACK TO ALL NEWS
Currently reading: BTCC 2018: Ingram charges to early points lead
UP NEXT
New 2026 Polestar 6 confirmed as 874bhp evolution of O2 concept

Goff started from pole and won the opening race in his Eurotech Honda Civic Type R, although he had to fend off a strong challenge from former champion Colin Turkington (WSR BMW). 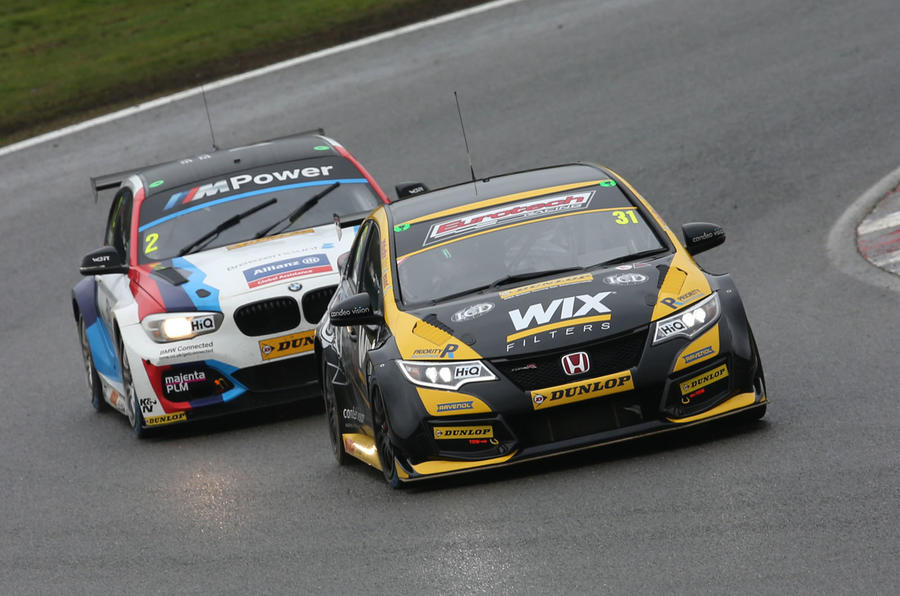 The second race was a thriller, as a drying track shuffled the order. Speedworks Toyota Avensis driver Ingram led most of the way from Andrew Jordan (WSR BMW) and Goff, but when the track dried late on the wet-shod frontrunners faded and those who had gambled on slicks charged to the front.

Aiden Moffatt (Laser Tools Mercedes) and Proctor (Powed Maxed Vauxhall Astra) led the way, before clashing while battling for the lead. Proctor, 19, survived and held on for his maiden win, ahead of Jake Hill (Volkswagen CC).

Having faded to 11th in race two, Ingram scythed through the order in race three, overhauling the new Alfa Romeo Giulietta of Rob Austin to claim victory – and the early points lead.

Here are some more things we learned from Brands Hatch…

Sometime Rolls-Royce driver Goff’s third BTCC race win came on a difficult slippery track, and under immense pressure from Turkington. It also showed that BTCC drivers are capable of racing hard but fair.

“Colin had better traction out of the final corner with his rear-wheel drive car, and we had a little rub on one occasion, but he’s a very fair driver and we came out fighting,” said Goff.

BTCC EXCLUSIVE VIDEO: Here's how round one of the #BTCC unfolded in 60 seconds. Watch all the live action in full now on ITV4. pic.twitter.com/ycnHNMpM8R

Proctor’s shock first BTCC win was all due to a gamble: he spotted that the track was slightly driving on the green flag lap, and opted to roll the dice and pit for slick tyres. 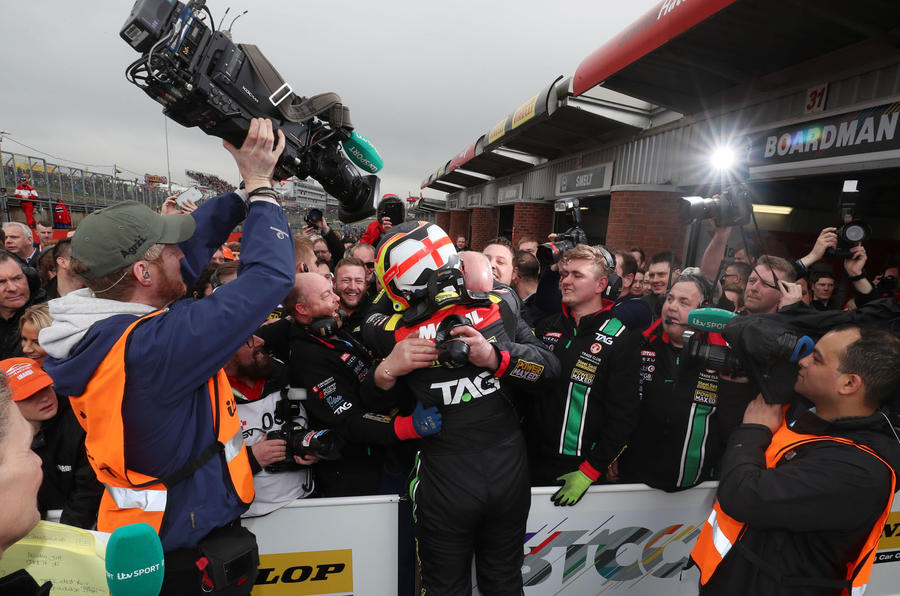 “I told my engineer and he said ‘let’s put slicks on’. I said: ‘We’re not going to win the race on wets but we just might on slicks, so let’s give it a go’ – and look what we’ve done.”

BTCC EXCLUSIVE VIDEO: Round 2 of the 2018 #BTCC was one to watch. Here's how the thrilling race unfolded in 60 seconds. Follow the rest of the action now, live on ITV4 pic.twitter.com/EFd7RQUp8J

Ingram, who now has a three point lead over Goff in the title race, clearly knows how to start a season strongly: his race three win made it three years in a row that he has taken a victory in the Brands Hatch opener.

“It was a great end to the weekend,” said Ingram. “There was a lot of pressure on us, with people expecting us to qualify on pole and win the first race, but we had a bit of an uphill battle.”

BTCC EXCLUSIVE VIDEO: Here is Round 3 of the #BTCC in 60 seconds. Tom Ingram taking the win to finish a spectacular opening weekend at Brands Hatch. pic.twitter.com/0aY0S18Uzv

The Team Dynamics Honda squad had a tough event running the new Civic Type R for the first time. New signing Dan Cammish set the fastest time in qualifying – but was stripped of his time after driving past a red light in the pit lane, lining up fourth.

Cammish started strongly in race one before fading to eighth and was 16th in race two on the wrong tyres. He was 11th in race three. Still, he fared better than team-mate Matt Neal, who crashed out of the first race and struggled from then on. 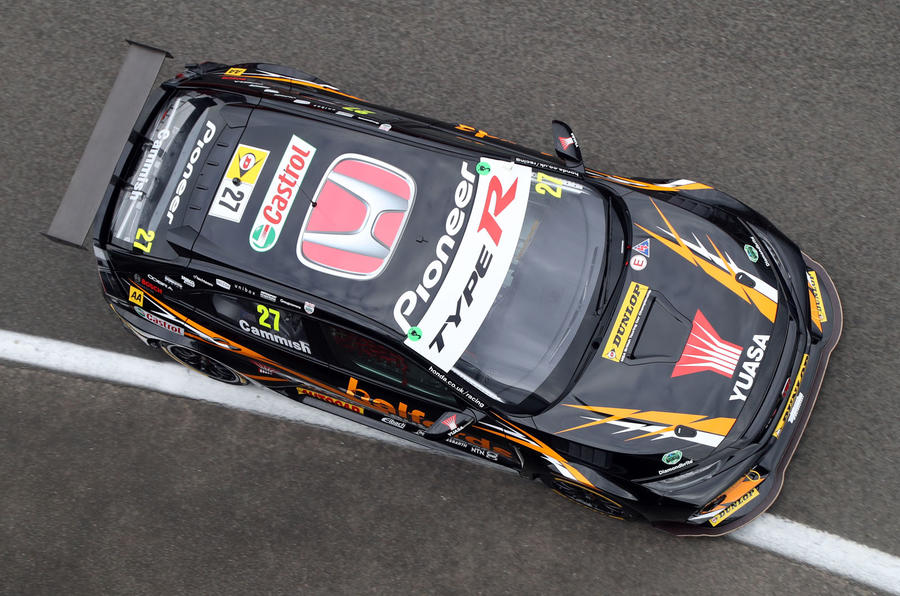 Sutton could only muster 18th on the grid, and did well to race up to seventh in race one. He was more competitive early in race two before dropping down the order on wet tyres, but he banked good points with fourth in race three.

While it was a tough start to the reigning champion’s title defence, he won’t be too worried: he failed to score a single point in the season opening meeting last year.

It’s going to be close…

The BTCC’s 32-car field is rich with depth – it now contains 18 race winners – and the opening weekend showed that even the smaller teams can run at the front.

As well as the Power Maxed Vauxhall team taking its first win, there were maiden podiums for the new HMS Racing Alfa Romeo, and Ollie Jackson’s AmD Tuning Audi S3. 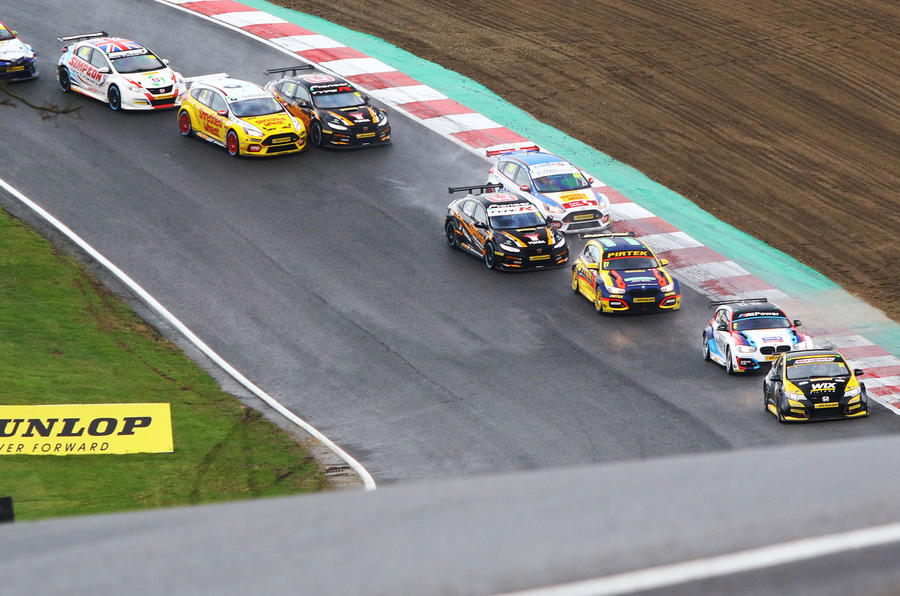 Next round: Donington Park (Leics), April 29

BTCC 2018: Eight things to watch for this season

I switched to F1, saw 1 lonely car on track then 1 in the pits, then switched back to BTCC, saw Ginettas oversteering, an A-Class smashing into the tyres & a 911 flying through the air doing a 720. Excellent cosy rainy-day BTCC action.

Thank you very much!