BACK TO ALL NEWS
Currently reading: How Mike Conway is aiming to recapture the magic in WEC
UP NEXT
2022 Mercedes-AMG SL gets four seats, 4WD and 577bhp V8

How Mike Conway is aiming to recapture the magic in WEC

As the enticing hypercar era of the WEC begins this weekend, few would bet against reigning champ Mike Conway winning again. We meet the Toyota racer
Share
Open gallery
Close

So the new era finally starts. This weekend at Spa-Francorchamps, the FIA World Endurance Championship will kick back into life as the new Le Mans Hypercar (LMH) category takes its global bow.

The Spa 6 Hours heralds new hope for long-distance sports car racing as a raft of manufacturers, including Audi, Ferrari, Peugeot and Porsche, plot their return to a much-loved form of motorsport that has fallen into the doldrums in recent years, at least in terms of the premier division. Now a new golden age beckons – but just not yet.

It’s unfortunate that the new era will get off to a stuttering start, because there are just two new LMH cars on the entry list, and both are Toyotas. The Cologne-based Gazoo team, which almost single-handedly propped up the final years of the previous LMP1 era with its sophisticated (and expensive) TS050 Hybrids, was the first to commit to the LMH category – and, thankfully for the WEC, has been quick out of the gate with its new GR010 Hybrid. In contrast, Peugeot’s campaign will start next year, before the other ‘big three’ arrive in 2023.

Toyota was meant to be facing two LMH cars from American boutique hypercar specialist Scuderia Cameron Glickenhaus in Belgium, but owner Jim Glickenhaus has stuck by his word that he will enter his new SCG 007s only when they’re deemed to be ready. Hopefully that will be by Portimão in June and Monza in July, ahead of the pandemic-delayed Le Mans 24 Hours on 21/22 August. 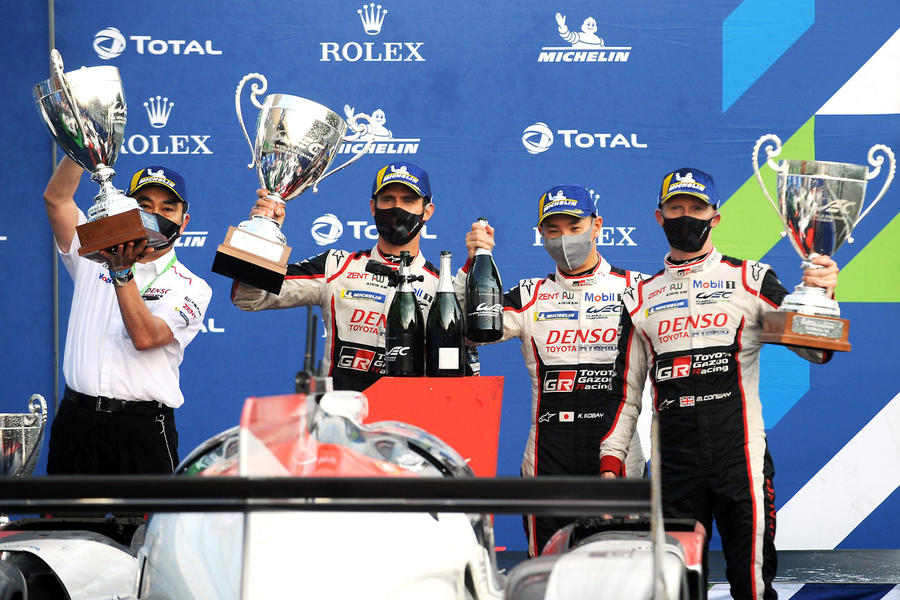 For this weekend, that leaves the GR010s facing a lone Alpine A480, a ‘grandfathered’ non-hybrid LMP1 car that in its previous guise (as the Rebellion R13) beat Toyota’s TS050s on more than one occasion last season, thanks to the Equivalence of Technology handicapping system.

A similar Balance of Performance (BoP) formula now aims to even up the two cars built to entirely different rules. It’s an echo of the early Group C races in 1982, when the new Porsche 956 faced – and was beaten by – Lancia’s Group 6 LC1s. From those faltering first steps, Group C emerged as arguably the most competitive and best-loved sports car era. Here’s hoping history repeats – although Toyota won’t agree in the case of Spa.

Autocar caught up with GR010 driver Mike Conway during a break from testing at Circuit Paul Ricard, before the two-day WEC Prologue at Spa that ran this week ahead of the race. The 37-year-old from Kent was crowned world champion last year with team-mates Kamui Kobayashi and José María López and will once again face genuine (and, to Toyota’s credit, unimpeded) opposition from the sister car of Sébastien Buemi, Kazuki Nakajima and Brendon Hartley. Conway says he’s “excited” about the new era but can’t hide his regret that the car he will now race is heavily dialled down from the technical marvel that was the TS050.

“It’s still a prototype, still a sports car and still loads of fun to drive,” he says. “As you say, everything is dialled down: the downforce, the power, especially from the hybrid side… it’s quite a bit down. But we have more power now from the combustion engine. It’s not quite as quick – we’ll be slower – but that was the target from [organiser] the ACO and the FIA to make a car that’s more budget-friendly and will work across different championships. They’ve achieved what they set out to do.

“As a driver, you always want to go faster and develop a quicker car. It’s definitely different for us, but that’s racing. You see it in Formula 1: they get to a peak where it’s superquick and then the cars get slowed down. As the years go by, we’ll find a way to go quicker with this car, like we always do.” 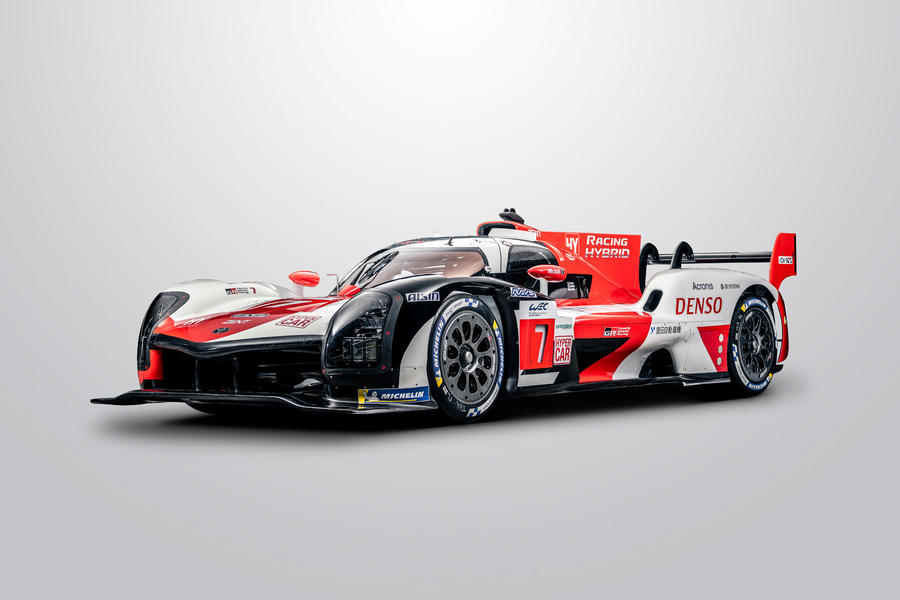 If his enthusiasm sounds a little constrained, it’s easy to understand why. Compared with the TS050, the GR010 has 32% less power and its lap time around the 8.4-mile Le Mans circuit is expected to be about 10 seconds slower. The TS050 had hybrid systems working across both axles; the LMH features a single front motor-generator, delivering 268bhp of electric power that maintains an element of four-wheel drive over speeds of 75mph. Combined with its larger 3.5-litre petrol V6, maximum power output is 670bhp, compared with the near 1000bhp of the TS050, which was 162kg lighter, too. Clearly it’s a massive change, but it had to happen. LMP1 costs had spiralled and inevitably led to its demise.

On the plus side, Toyota’s drivers no longer need to worry about ‘lift and coast’ to save fuel. “We were flat out anyway; it was just that the engine was cutting when it wanted to, to save consumption,” Conway points out. “There was a technique to it, but I do like the way that we don’t have to worry about saving fuel so much and can drive the car a bit differently. I hope the racing should be good, with the BoP system as well. If they get that right, I hope we’ll see what you get in GT racing: it being really challenging and lots of fun.”

Toyota will at least be better prepared for Spa than Porsche was for the Silverstone 6 Hours back in 1982, when the 956 made its race debut just six weeks after its first shakedown. Since last autumn, the GR010 has run five tests for a total of 14 days at Paul Ricard, Portimão and Motorland Aragón, always with a single car. All but the roll-out were endurance runs as simulations for Le Mans, although the team did lose one test, scheduled for Aragón in January, due to snow.

“We’ve got quite a few miles on the car, the amount a team wants with a new car,” confirms Conway. “You always want more, but time and budget all add up. But we’ve done a decent amount at different tracks, offering different challenges. 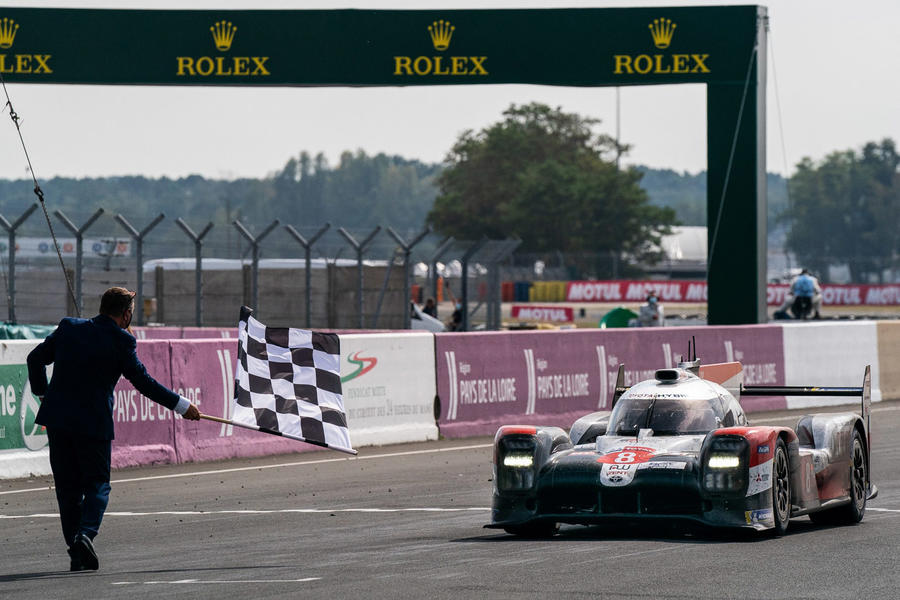 “As for reliability, it has been okay. You always want it to be perfect but, as in previous years, we’ve run through some changes to simulate problems. There are always little things that creep up and surprise you with a new car, but it’s normal.”

So how does he feel about Spa this weekend? “We’re disappointed that Glickenhaus won’t be there, because we were looking forward to competition,” he says. “But we have Alpine; we haven’t seen them all year and don’t know what they’re going to be like. With their dulled-down LMP1 car, you would think they will be very reliable, with a well-balanced car that has been around for a few years already. I’d expect them to be good, but we don’t know how close or how it’s going to be.

“Hopefully Glickenhaus will be at Portimão and Monza and definitely at Le Mans. We’re looking forward to competition and, with Peugeot coming in 2022, it doesn’t seem that far away.”

The future is what everyone is really looking forward to. “It’s definitely exciting to have all these big-name manufacturers coming back,” says Conway. “Ferrari, Audi, Porsche, Peugeot… All the drivers who we know are lined up so far will make it a really strong field. It’s going to be a fun few years ahead.”

What Conway really wants is to end his Le Mans hoodoo, following horrendous luck in recent years. His world title is something to be proud of but, in sports car racing, victory in ‘the big one’ still means more.

“I haven’t really thought about it much,” he says of his status as a reigning world champion. “It obviously felt mega at the end of last year, knowing that car #7 was world champion. We’ve definitely been a bit unlucky at Le Mans for the past few years, and still that’s the one we want to get. This year, we’re just happy it’s still happening. It’s on my birthday week, so hopefully I can give myself a nice present. It will be pretty hot, so it will be more challenging. It’s not far down the road. Before we know it, we’ll be at Le Mans.”

This is Conway’s seventh year with Toyota. Time to scratch that itch?

Alpine A480 racer revealed as WEC and Le Mans contender