Dive into any niche world and you’re guaranteed to be amazed by the dedication, expertise and total commitment of those that populate it. That was certainly the case when Autocar found itself pitched into the middle of a national-level radio controlled car racing event in a corner of a public park in Uxbridge, just north of Heathrow. Held in blistering heat on the morning of the British Grand Prix, it proved no less intense than the drama that was playing out at Silverstone – just without the 140,000-strong crowd.

The brief was simple, if more than a little intimidating: at the invitation of Tamiya UK, the British arm of the Japanese kit building empire, we were challenged to build up one of its 1/10th-scale TT-02 chassis from the box for a junior member of the Autocar team – by that I mean my six-year-old son Elliott – to race in round four of the MB Models King of Clubs series at the grandly named West London Racing Centre. On one level that just sounded like fun, especially as I’d always fancied building one of Tamiya’s RC kits. On another, we had just three weeks to build the car and get Elliott up to speed on the driving. Gulp.

I have to admit, I definitely took the lead ‘technical director’ role on the build, with Elliott wandering over from time to time to check out progress before going back to kicking his football about. At first glance, the instructions looked daunting (until I stopped trying to read the Japanese). But like anything, once you broke it down to one step at a time it became captivating – especially as I was building against the clock. The best bit was the lack of glue, my nemesis from childhood days building plastic plane kits. Here, there were just lots of screws and grease to be applied to the moving parts. But with everything bagged and labelled clearly, the chassis and its suspension soon began to take form. 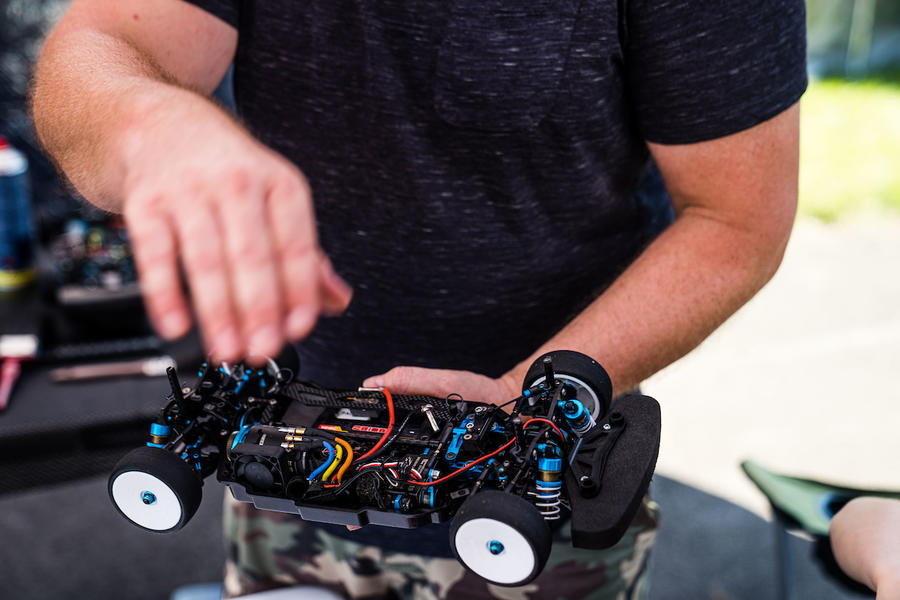 These kits really are pieces of miniature automotive art. The fully operational front and rear coil-spring damped suspension was so satisfying to piece together on the bathtub-type frame, although proper diffs on each axle left me wondering what massive error I’d just committed and would only find when it was time for testing. But the bit I was really worried about were the electronics: a 6V RS540 Sport Tuned motor – apparently with a best efficiency rpm of around 18,000! – mated to a separately supplied two-channel transmitter, receiver and steering servo. This bit looked really complicated. I didn’t pay too much attention to the many gearing options suggested and stuck to the basics, while my Dad – an RC enthusiast who dabbles in boats rather than cars – was a welcome consultant engineer to make sure it was all synced up and ready to roll. Although how he manages with all those wires on his own when he’s colour-blind, Lord only knows…

Last job with little more than a week to go: spray-painting the plastic body (on the inside) and applying the stickers (on the outside). Tamiya had kindly sent me a kit right up my particular street: a fully Martini-liveried silver Porsche 911 Carrera RSR, just like the one Herbie Müller and Gijs van Lennep ran to victory on the 1973 Targa Florio. Proper! But I had to source the paints myself and when they arrived it was beyond time to get the masking tape out. As per the instructions, I went to work first on the fluorescent red bumpers – except the spray paint leaked under the tape. What an unsalvageable mess. At this point I sacrilegiously forgot about historical accuracy, sent a silent apology to Herbie and Gijs, and went for an all-over fluorescent scheme instead… Anybody want to buy an unused can of silver paint? In my defence, the easy-to-apply Martini stripes worked really well against the bright red – and at least it would be easy for Elliott to spot out on track. 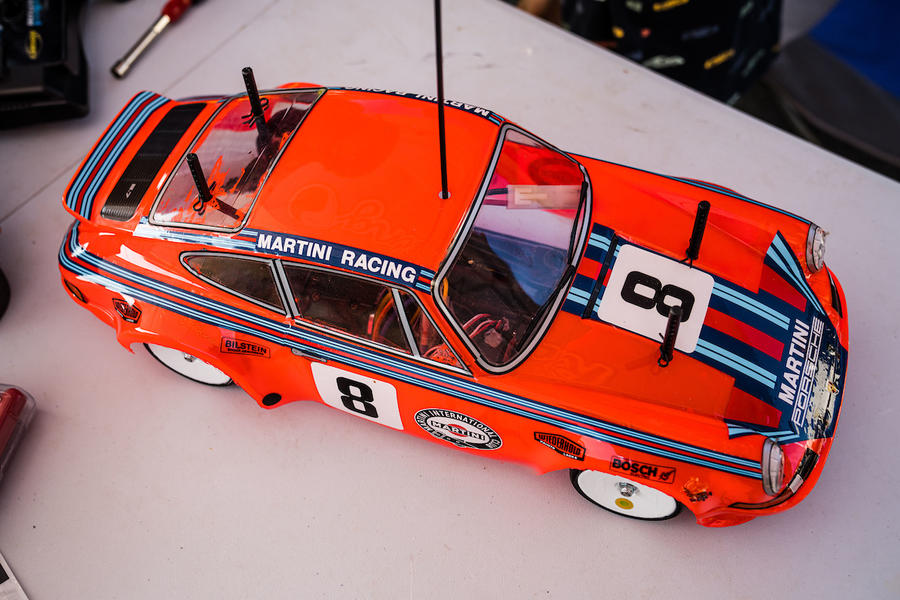 The build finished precisely three days before the race meeting, and although initial shakedown tests were surprisingly trouble-free (once engineer consultant Smith Sr Sr sorted the steering servo), Elliott was struggling with the controls. That’ll be because he’s six. And his bumbling old man hadn’t given him enough time to test. Elliott didn’t care, of course (again, because he’s six) – but on race day I was a bag of nerves, knowing full well we’d be diving into a world way beyond our paddling depth.

Fortunately, everyone involved at MB Model King of Clubs bent over backwards to make us feel welcome – and understood all too clearly the tech director was a rank amateur who had let his star driver down on prep time… Elliott was entered into the junior rookie category and would have a series of heats in the morning to get up to speed, with an hour between for fettling and car repairs – which would prove much needed. Although we couldn’t help but stop and watch some of the top-class runners. The hand-eye coordination and skill involved to keep these things on course around the nicely prepped kerbed track was mind-boggling. Photographer Malcolm Griffiths, a seasoned pro specialising in motor racing on a slightly bigger scale, admitted capturing these buzzing little projectiles was a challenge the likes of which he’d never encountered before, suitably out of scale with reality.

The track was surrounded by the ‘paddock’: gazebos shielding the competitors from an unrelenting sun that only increased the intensity – and the tech director was getting a sweat on! Around us, old hands were preparing their cars customised far beyond our box-fresh RSR. To be fair, I too had been sent a pack of upgrades (!), but we had enough on our plate without eking levels of performance we had no hope of tapping into. But next to us a group of chaps were hard at work and I struck up conversation, noticing as I did so the F1-style tyre warmers… Erm, how much exactly do you spend on your hobby, I asked in all innocence? “Let’s just say one season I spent a grand on tyres alone,” came the reply. To repeat, niche world equals proper commitment. 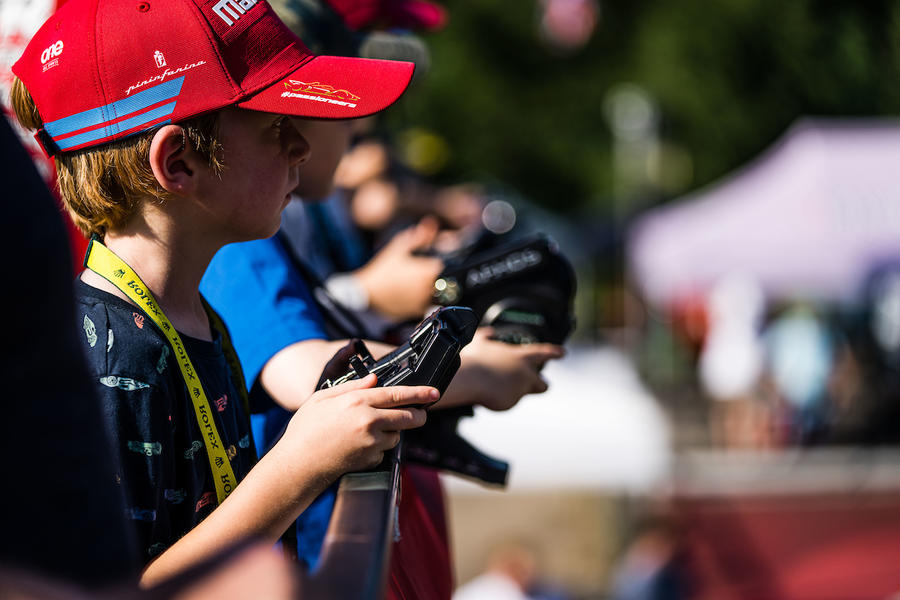 We were supplied extra sticky racing rubber to bolt on the RSR (I looked at Elliott and chuckled), and that’s when it dawned my little boy would be on his own, looking down from the top of a platform for his first heat – which lasted all of three seconds when he drove into a wall. Upon return to our gazebo paddock, former Tyrrell and BAR F1 mechanic Steve (yes, really) came to our aid, kindly diverting attention from his own prep to help fettle the steering servo and finally getting the thing running straight. He couldn’t have been nicer or more helpful and we were ready in plenty of time for heat two – when poor Elliott again crashed within about a minute of the session starting. A ‘dogbone’ driveshaft popped out in a high-speed collision with the barrier – although this time I fixed it with only a cursory bit of advice from Steve. The sense of satisfaction was close to overwhelming.

Clearly out of our depth, the organisers at this stage took pity on us and allowed a little rule-bending for the third heat: Elliott would have some help – from a bona fide RC world champion, no less! Like Steve, Marcus couldn’t have been kinder and offered his considerable expertise to help my little driver steer his way around the course – although the impressed commentator on the live stream had no idea newcomer Elliott Smith had a guiding hand… Oops, sorry chaps! Although to see Team Autocar’s fluorescent RSR neatly taking the turns at a decent lick, completing the heat without a hint of a technical hitch, once again brought a strange sense of overwhelming satisfaction. 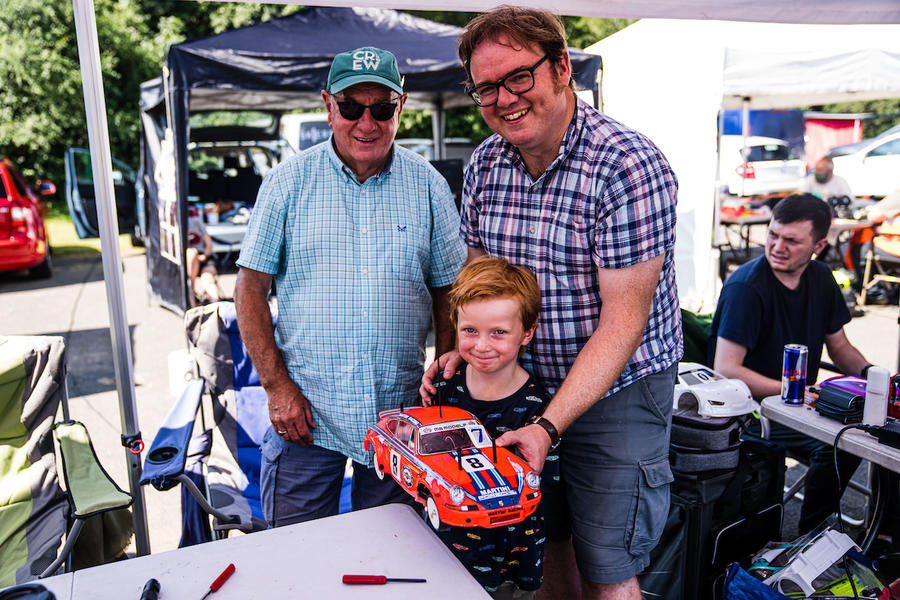 Time to quit while we were ‘ahead’. Marcus, with 35 years of RC experience, didn’t exactly qualify as a junior rookie – so it was the right time to retreat, head home and give Elliott some more practice away from the pressure-cooker of competition. But his day, indeed his year, was made when the organisers presented him with a trophy anyway. He’d had a ball.

Testing since has been going pretty well, although Elliott still needs some time before he’ll be race-ready. As for the technical director, somehow I doubt that day will ever come. Still, those upgrade parts are looking at me from the box. Maybe with that extra performance… The term ‘hobby’ doesn’t really cover such a world. It’s more like an addiction.

Tamiya Wild One returns for 2022 as driveable off-road EV