BMW is investigating a high-profile racing comeback at Le Mans, with marketing boss Ian Robertson admitting a return to the famous 24-hour endurance race “is on the agenda”.

However, Robertson stopped short of saying which class of racing BMW was currently investigating, highlighting only that the BMW M6 GT3 car showed intent to compete.

Autocar revealed in July that BMW is considering a more high-profile assault on the race, possibly using a radical hydrogen-powered fuel cell race car in 2018 as it prepares to pave the way to launch a hydrogen powered fuel cell production car around 2020.

It is not clear whether BMW would enter the car at Le Mans in an established class or as an experimental vehicle in the non-competitive ‘Garage 56’ category that has included Nissan’s electrically assisted Deltawing and ZEOD racers in recent years.

Robertson appeared to play down the option of the non-competitive category, saying: “Garage 56 is not that well known, and we have to be conscious of the return on any investment.”

Prior to launching any electric i brand vehicles for sale, BMW invested heavily in marketing and promotion over several years, and building a similarly advanced campaign around a Le Mans bid is considered to be one way of giving nascent hydrogen fuel cell technology more credibility in the minds of potential car buyers.

It is understood that the production car would form part of an expanded BMW i line-up rather than sitting under another sub-brand, or being launched as a derivative of a mainstream model.

The firm already has a hydrogen-powered BMW 5 Series GT prototypes running, and is known to be working in conjunction with Toyota on advancing the technology as fast as possible. The hydrogen-powered Toyota Mirai goes on sale in the UK this year.

While Le Mans organisers have traditionally been open to adapting rules to fit new technology, and a topline LMP1 entry would potentially pitch BMW against rivals including Audi and Porsche, it would also be a potentially risky strategy for the firm to pitch itself against more established race teams. It could also put BMW in direct competition with its potential joint venture partner Toyota.

Rumours linking BMW with a return to Le Mans have been rife in recent months, but insiders are known to have questioned the marketing and sales return against the expense of building a car for the World Endurance Championship, which is so heavily built around the annual race at Le Mans.

However, in a recent interview with www.autosport.com BMW motorsport boss Jens Marquardt appeared to leave the door open for a race programme as innovative as entering a hydrogen-powered car, while also playing down an LMP1 entry that would pitch BMW head-to-head with the established competitors.

"LMP1 is, at the moment, the big hybrid thing, and in there we wouldn't be the leader," he said. "We wouldn't even be the fast follower, we would be a slow follower now, as the fifth [after Audi, Toyota, Porsche and Nissan] manufacturer joining in," he said.

BMW took its sole victory at Le Mans in 1999, running the BMW V12 LMR Le Mans prototype that was built in conjunction with the Williams Formula 1 team. 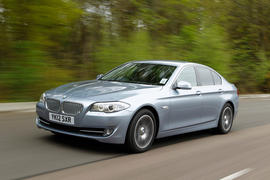 XXXX and his luddite views

I only opened this page to see what xxxx was going to say.

"Fuel cells - Ugh. BUT BMW have given up Fuel Cell Developments"

There are many self-opinionated nutters on this online magazine.
No-One with a brain on their head should write off one technology before it has a chance to show that it is worthless.

RPrior - wrong on so many counts

It's 2018 and BMW aren't entering a Hydrogen car in fact they've removed all Hydrogen references from their Website and are continuing to develop EV's like most other manufactures.

"Fuel cells - Ugh. BUT BMW have given up Fuel Cell Developments"  nothing to do with a being a Luddite you just needed a bit of common sense to see the writing on the wall.

How do you feeel now?

Good point. But in Formula E they don't just swap the battery during a pit; they swap the whole thing. Yes, one racing car pulls in and then a completely different one emerges from the pit lane. And we thought diesel race cars were odd.
Moparman 11 June 2015

If not for silverware I think racing a hydrogen car will show the public that refuelling isn't as fraught as it was claimed long ago (I remember them trialing robots for the task back in the day) and can be done as with any other diesel/petrol-powered vehicle. The electric car has merit but their refueling would have to require a full battery swap out as was once thought of as an idea for passenger cars not that long ago. It may not be the wave of the future (though I think the battery swap has merit) but I would like to see them try.
View all comments (5)