BACK TO ALL NEWS
Currently reading: Race-ready Tesla Model S P100D shown ahead of Electric GT season
UP NEXT
Bentley to launch five electric cars in five years from 2025

The final version of the Tesla Model S P100D that will race in the long-awaited Electric GT championship has been revealed ahead of its competition debut in November at Jerez.

The battery-powered saloon, 20 of which are being built for the opening season, has been renamed Model S P100DL to mark its track focus — evident with the fitment of a large rear wing and widebody. It produces 778bhp and 734lb ft of torque (the road car offers 603bhp and 713lb ft) and can accelerate from zero to 62mph in 2.1sec — 0.3sec quicker than the road version. It has a top speed of 155mph.

​Despite running with unmodified hardware, the car's 100kWh battery pack is the largest in motorsport. Autocar spoke to Electric GT CEO Mark Gemmell last year and he said he expects the factory specification hardware to be extremely reliable.

"The standard drivetrain is in a 25% lighter car, so the stresses are actually less than it has been designed for in the production vehicle," Gemmell said. "This also makes the championship more valuable for Tesla road customers, as our racing cars are closer to what they drive, so you're essentially seeing a production vehicle on circiuit." 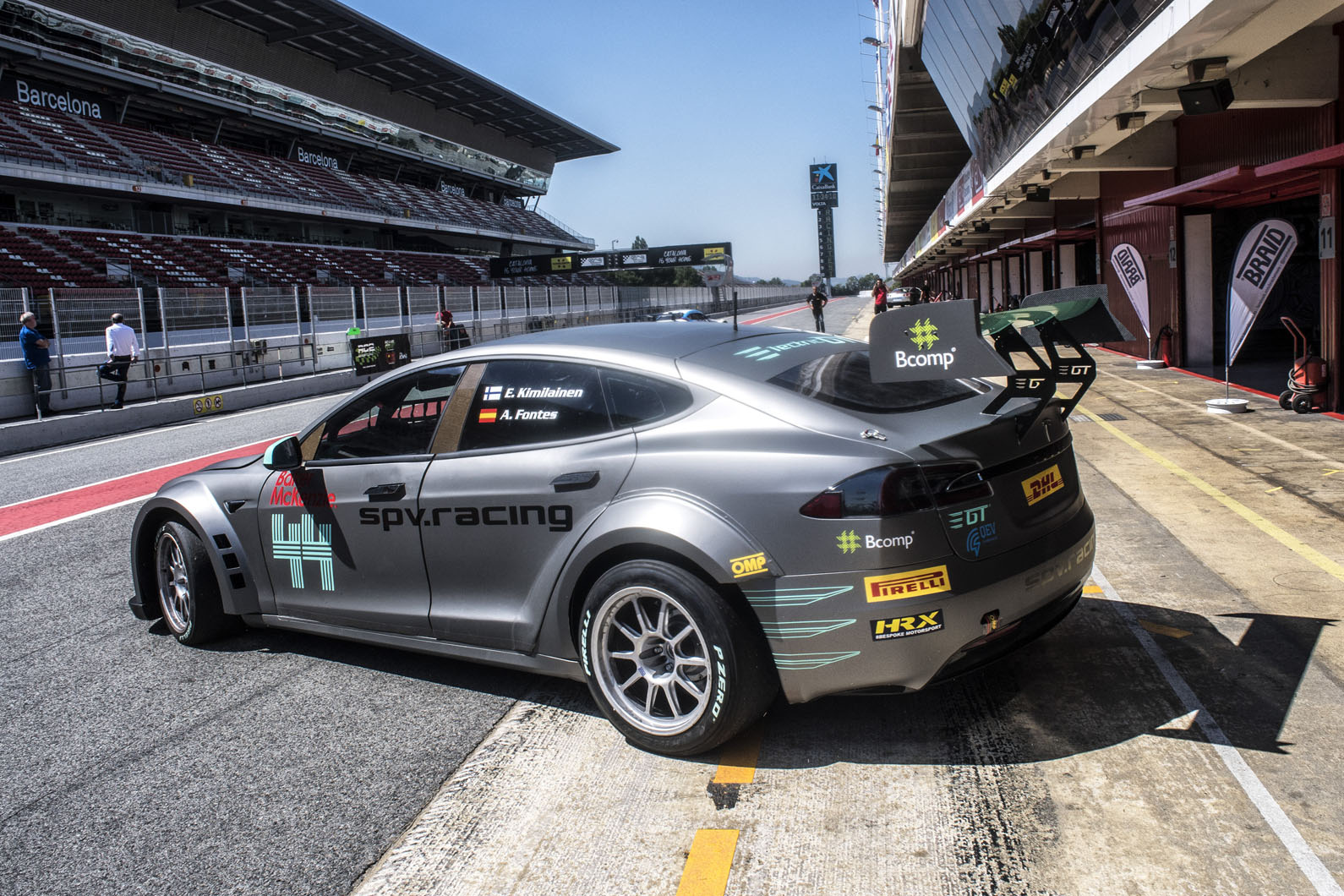 Pirelli is supplying the tyres, which are 18in in diameter, 265mm wide at the front and 305mm wide at the rear. Both slicks and treaded wet tyres are available. A dual-circuit single-pedal hydraulic race brake set-up has been installed.

The car sits on double-wishbone pushrod-operated front suspension, with twin dampers and springs at the back. The stripped-out cabin features an FIA roll-cage and fire extinguisher. No weight figure has been released, but Gemmell's comments suggest that around 525kg has been removed from the car, meaning it'll weigh close to 1600kg.

At top speed, the P100DL's racing bodywork produces 51kg of downforce over the nose and 92kg over the rear. The bodywork itself is made from high-modulus carbonfibre — a particularly fibre-dense version of the material. 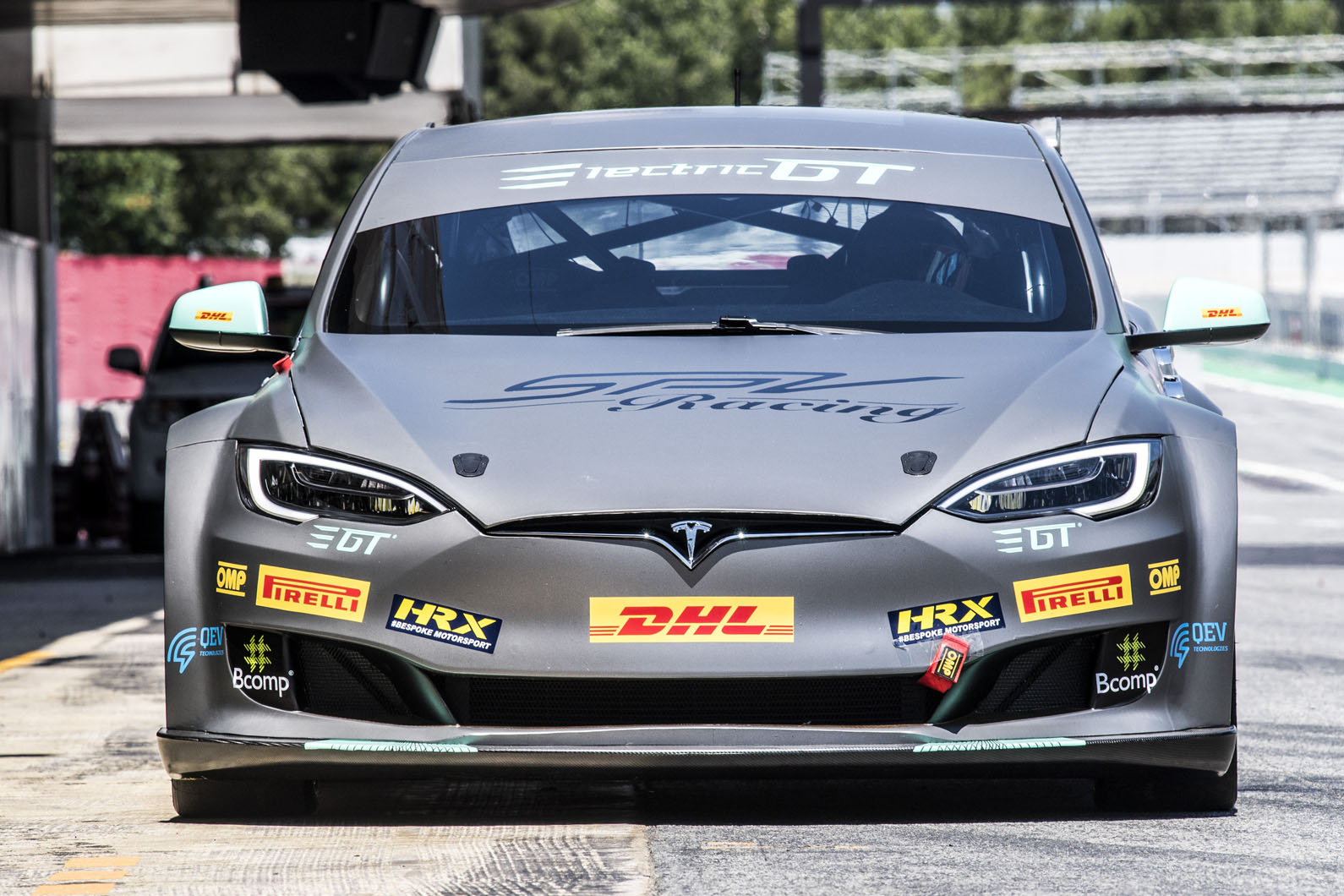 The championship has FIA certification and its calendar will include several iconic circuits, including Silverstone and the Nürburgring (DTM layout).

Races will feature standing starts — something that Gemmell thinks will help make the event a unique spectacle.

"Seeing 20 of these cars launch off — they’re about as fast or maybe even a bit faster than a Formula 1 car off the line," he said. "I think people will be surprised by the noise. When you get 20 cars together, you do get an interesting sense of power."

Supporting the Electric GT will be the eKarting Series, which uses electric go-karts, and virtual racing platform eSports Series.

You can not keep Tesla out of news. Most of that coverage is negative that almost every paper and magazine likes to report - mostly to do with Tesla investing book hurting amounts on expansion and R&D and because of that not turning a profit. Every now and then a story emerges that tells how far the competition trails Tesla.
eseaton 1 May 2018

I think it has limited appeal,BMW way back in the 80's had there M1 series with celeb names driving them,it had moderate success,today?,well who are you going to get?
View all comments (9)