High-performance Cadillac, unleashed at LA motor show, features a turbocharged engine for the first time and will be available as a saloon or coupé
Share
Open gallery
Close
Share story

The new Cadillac ATS-V has been revealed at the Los Angeles motor show. The car comes with a twin-turbo, six-cylinder powertrain for the first time in the history of the brand's 'V' performance range.

It won't be offered in right-hand drive form, however, although imports will be made into Europe. The ATS-V's chief engineer Dave Leone told Autocar that the business case was too small for right-hand drive, but it was being looked at for the next-generation of Cadillacs.

Leone said that the ATS-V was the "most performance-focused Cadillac in history". He added: "It's the faster ever, the most agile and the most nimble", and said that the model "brings performance credibility" to Cadillac and the rest of the range.

The car has been benchmarked against the likes of the BMW M4, Mercedes-Benz C63 AMG, and Audi RS5. "It exceeds these models for ride and handling, is faster, offers better isolation, crisper steering response and braking distances that are the best in the business."

He added: "It is very important to beat them, as entuhsiasts judge the brand on specification and performance. We need third party approval by beating them. We set out to do that, and I can say with prode and confidence that we have."

Leone said the team working on the ATS-V had one of the highest employee satisfication ratings in General Motors, and 75 per cent of them were amateur racers. Many have transferred from working on the Corvette Stingray, a project Leone led for two and a half of the four years of development.

"People want to be associated with this car," he said. "It's not a Corvette, but has the same credibility."

Gearbox options are either six-speed manual – which comes with rev-matching, no-lift shifting – or a paddle-shift eight-speed automatic. Both transmissions also feature launch control. Rear-wheel drive is offered; Leone said all-wheel drive would improve performance but add too much weight, and was therefore not considered for the car.

Leone said: "The engine is so responsive due to the use of titanium for some components, which lowers inertia. The eight-speed auto' can also shift as fast as a dual-clutch transmission, and is 12.5kg lighter than the old six-speeder for better economy."

The chassis, suspension and drivetrain have all been reworked. Compared with the standard Cadillac ATS variants, the V-series car has been tuned to deliver greater body motion control for a more agile feel, while maintaining ride quality. It is 25 per cent stiffer than non-V models.

The ATS-V has the same 2775mm wheelbase as other cars in the family, but features wider tracks at the front and rear to enhance grip, improve handling and contribute to more direct-feeling steering.

The Cadillac ATS-V rides on Michelin Pilot Super Sport tyres developed specifically for the model, which are made up of three different compounds to try and maximise performance and durability, and improve steering precision. 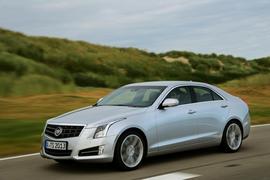 The ATS-V also features magneto-rheological dampers. There are five driver-selectable settings, including track-oriented settings for the stability and traction control systems, in addition to more road-biased Touring and Sport settings.

Almost every exterior panel has been reworked compared with the standard ATS. The car gets a lightweight carbonfibre bonnet with an air scoop, aero-optimised front and rear bumpers, a downforce-producing front splitter, wider wings and a rear spoiler.

The interior of the ATS-V features Recaro sports seats. The car comes with a performance data recorder that allows drivers to record high-definition video, with data overlays, of their driving experiences, and then share on social media.

The ATS-V will be available in saloon and coupé body styles when production begins in the spring of 2015. Prices have yet to be announced.

More V-series models are planned, said Leone, including a CTS-V. They will all be based on natively rear-wheel drive products.

"V-series cars are the purest form of passion for Cadilac, and at the core of the brand," he said. "It brings performance credibility to us."