Nissan has revealed the IMk concept, an electric city car that hints at future styling for the maker's small car range.

The Japanese car maker said the concept, which sits on a new EV platform, previews a “new direction of Nissan’s design language” and brings to life Nissan Intelligent Mobility, the brand’s umbrella term for technology including connectivity and autonomous systems.

The boxy concept, revealed at the Toyko motor show today, is reminiscent of popular Japanese kei cars, but the car maker said the IMk was created to address a segment that’s “prevalent in Japan and becoming so the world over: the city car”.

This suggests the IMk previews a global model, rather than a kei car, examples of which are typically only sold in Nissan’s home market. When asked whether a production version would be sold outside of Japan, Nissan said: “It’s a concept car. It shows the possibility of a small, chic urban EV. We look forward to hearing what potential customers think about it.”

Currently, Nissan sells one mainstream electric car: the Leaf. A zero-emissions SUV, previewed in the IMQ concept, is expected to be revealed in 2020. A production version of this IMk concept would allow Nissan to offer a cheaper EV, and one focused on city dwellers who are most likely to buy EVs.

Given that the IMk concept sits on a new EV platform, it is likely such an architecture will be used across a number of Nissan's cars to ensure economies of scale. The slightly bigger Micra is one candidate for the platform.

The concept is shorter, narrow and taller than the current Micra, in line with traditional kei cars, although the bespoke EV platform will allow for considerably more interior space.

Inside, the cabin is intended to be a new type of room “that exudes the nature of a cafe or lounge”, said Nissan. It features bench-style seating and, other than the start button and gear selector, is devoid of physical controls. Instead, driving information, such as sat-nav directions, appears in mid-air via a prism display. Other information is conveyed via holographic displays.

The concept represents “another step toward fully autonomous driving”, said Nissan. The Remote Park feature, powered via a smartphone, can search for a car parking space after the car’s occupants have left the car. When you're ready to leave, you can summon the car.

Nissan sales boss Asako Hoshino said: “The IMk concept provides a glimpse of the new direction of Nissan Intelligent Mobility as technology evolves toward electrification and connectivity. At Nissan, we intend to continue launching cars with the latest advanced systems to maintain our lead in automotive innovation.” 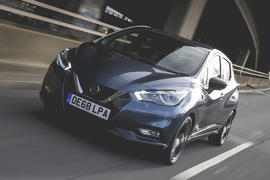 ( Or save it for Postman Pat)

What an ugly beast!!!

What an ugly beast, put back in the kids playbox at once!!!