Images and details of Mazda’s first electric vehicle have leaked in the Japanese media today ahead of its official reveal at Tokyo motor show tomorrow.

The image, which reveals the zero-emissions model will be called MX-30, was published alongside power figures, which match those of the e-TPV prototype we drove recently. It has a 35.5kWh battery and a single electric motor delivering 138bhp and 195lb ft of torque to the the front wheels via a single-speed transmission.

Mazda's last communication on the upcoming model was last week when it said the car develops the design language first seen on the recently launched Mazda3 to reflect “futuristic values and changing lifestyles”.

The model, which will go on sale next year, has a coupe-like cabin and “achieves a lightweight look by adopting a unique door concept”. Mazda added that the front face bears a “friendly expression”.

The interior is said to use empty spaces around the centre console to create a closeness between the driver and passenger seats. Mazda added that interior materials were chosen for comfort and “eco-friendliness”, both of which are intended to make the cabin comfortable.

The model, as shown in this leaked image, adopts an SUV bodystyle, which can more easily accommodate an underfloor battery pack.

The EV is likely to have a range between 120 and 150 miles, similar to the new Mini Electric but significantly less than more obvious rivals, such as the 279-mile Hyundai Kona Electric. It will be able to accept 6.6kW domestic charging and 50kW public rapid charging.

The Japanese firm’s range hasn’t featured a rotary-engined road car since the RX-8 went out of production in 2012, but it did produce a rotary range-extender Mazda 2 prototype – which Autocar drove – back in 2013. It has remained interested in reintroducing the technology to production since. The Mazda RX-Vision Concept, which was shown at the Tokyo motor show in 2015, used such a powertrain.

Mazda has eschewed hybrid and electric models in recent years, instead choosing to focus on improving the efficiency of its petrol engines. This year, it introduced spark plug-controlled compression ignition to the latest Mazda 3, with the promise that it will “combine the economy and torque of a diesel engine with the performance and lower emissions of a petrol unit." 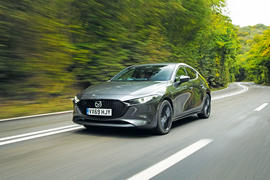 With a type 2 plug like that, they really are targeting Export Sales, since at home no one cares about it.

They are thinking, as most SENSIBLE folks do, that very few buyers cover more than 50-60 miles a day, on commute, shopping trips, etc, etc and this size of battery keeps weight down, reduces costs and gives those buyers who don't require more range EXACTLY what they want and need.

I'm sure that they will come up with the same excuses as Honda and Mini have, but if your competitors are coming up with cars that can double your range at the same price point ( or lower ) than you, it won't really matter if your car " is sufficient for 80% of users " or if " you chose driving pleasure over overall range ". People will still go and buy that funky looking Soul or e208, save a couple thousand and be perfectly happy with their choice.

I wonder if this is the entry

27 September 2019
I wonder if this is the entry level low range version, the Kona has 2 range variants, although it's always the more expensive high range option that gets quoted, so maybe a higher range is to follow? Fingers crossed because as you say it will struggle if priced against higher range equivalents.

For a £24k'ish city car it might get away with it especially if it can charge at 150Kw+ and maybe there'll be 2 versions but otherwise it's a risky stategy, just look at the Honda Urban and it's limited appeal.

For a £24k'ish city car it might get away with it especially if it can charge at 150Kw+ and maybe there'll be 2 versions but otherwise it's a risky stategy, just look at the Honda Urban and it's limited appeal.

It probably won't charge fast as that requires a big battery. The only cars charging at 150kW+ (e-tron, Model 3, Taycan) are those with 75kWh+ batteries.

back of the grid

15 October 2019
Mazda just playing catch up by the looks of it. That range is laughable.

As a Mazda fanboy, I'm really looking forward to their late entry to the BEV market. Although I understand their reasons by the somewhat uncompetitive range; predominantly urban use, lower CO2 output through the whole life of the car, from manufacture to end of life, I'm not sure your average buyer will consider those factors and will focus mainly on the range offered at the expected price point and sector this car is likely to sell at.  I'm sure it will look fantastic inside and out, but will that be enough to tempt sufficient numbers of buyers?

OK I accept that given this country's current poor charging infrastructure EV range is an important consideration for many buyers. But remember that it comes at a price: more range inevitably means more cost, more weight and more space taken up by batteries (a lot more in these instances).

Bearing in mind that as the charging network and speed improve - and considering that few of us want or need to drive more than 150 miles at a stretch - it's possible that Mazda and Honda may have made good decisions with their short-range EVs.

Maybe the smart move would be to wait until such time as smaller, lighter, cheaper batteries are available before being too ambitious with range?  Not all of us want to drive around in two tonne Teslas just so that we can go for the occasional long drive!