BACK TO ALL NEWS
Currently reading: Mazda developing ‘RX-9’ sports car, new patent suggests
UP NEXT
Tesla to expand select UK Superchargers to other electric vehicles

A chassis design patent filed last week by Mazda suggests the company is developing a successor to the rotary engine-powered RX-8 sports car.

As reported by Japan’s Motor Magazine, the ‘Vehicle Shock Absorption Structure’ appears to show a spaceframe-style structure unlike that currently featured on Mazda’s range of hatchbacks, saloons and SUVs.

The report also highlights the presence of a double-wishbone front suspension setup, used primarily by sports cars, with a prominent crossmember suggesting a front-mid engine layout.

The resulting engine bay is relatively small, leading the report to suggest Mazda could be developing a compact new rotary motor, in keeping with the tradition started by the company’s iconic RX-7 and carried into its RX-8 successor. 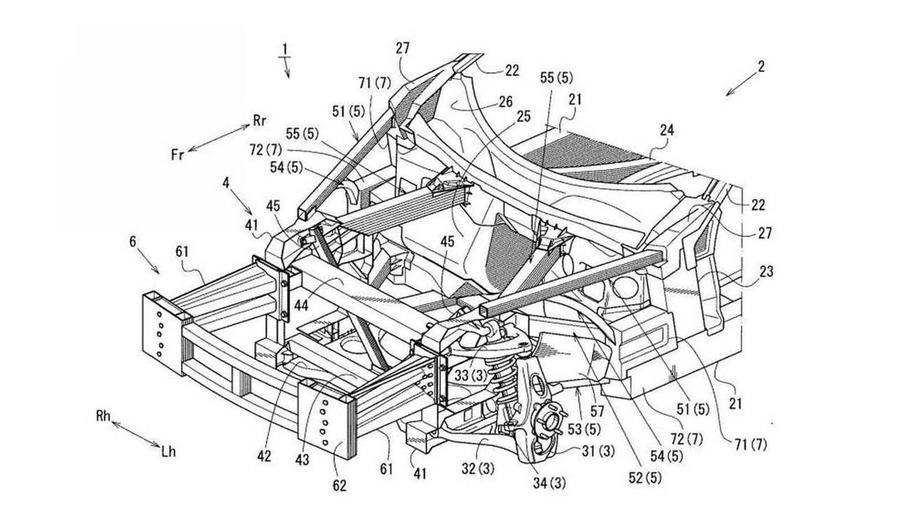 Lightness appears to be a priority as well, with carbonfibre-reinforced plastic and aluminium featuring prominently throughout.

A source at Mazda told Motor Magazine that the RX-9 will sit atop a newly developed bespoke platform, not intended for use elsewhere in the company’s line-up.

Earlier this year, Mazda acquired a patent for a new type of turbocharger designed with rotary power in mind, enhancing intake efficiency, improving performance and keeping soot and water out of the combustion chamber.

Mazda design boss Ikuo Maeda has previously confirmed to Autocar that a production version of the 2015 RX-Vision concept was still on the table.

“When it is decided as a brand that we need a sports car, that’s when we will produce the car,” he said. “As you know, we already have the MX-5. If we need a more premium sports car, then we need to have a serious think about it.”

Mazda RX-Vision-based model could still be on the cards​

Mazda to bring back rotary engine as range-extending hybrid

Why go it alone?

Given the close relationship with Toyota, I can't understand why Mazda would not adapt the Toyota Supra or next gen GT86 platform for a new sports car. Going it alone may result in a more optimised design to accommodate a rotary engine, but it would markedly increase costs and make a future RX9 very expensive. Sports cars are very much a niche market these days, so it to me makes sense for manufacturers to share design elements as Toyota and Mazda has done to good effect up to now.

And really isn't it time to give up on the Wankel engine given the seemingly impossible task of achieving low emissions and low fuel consumption / CO2  from a non optimal combustion chambre shape?

Mazda does it again!

I like Mazda; it seems to be much more innovative in everything it does.  Its cars drive well, the styling is some of the best and its interiors are getting better and better too.

I like Mazda; it seems to be much more innovative in everything it does.  Its cars drive well, the styling is some of the best and its interiors are getting better and better too.

Totally agree, and although this is an Autocar rendering, if it looks anything like this it will surely be a success, providing they've sorted the tip wear issues that afflict the other also stunning RX models.
I am becoming a bit of a Mazda fan, I like their na engine approach as I personally much prefer it to charged engines.

I do hope it happens because it looks quite nice, it doesn’t look like the others, has none of their design cues.

I do hope it happens because it looks quite nice, it doesn’t look like the others, has none of their design cues.

It does look rather good, mind you so did the RX7 and 8.