BACK TO ALL NEWS
Currently reading: Ferrari unveils 488 Pista Spider at Pebble Beach
UP NEXT
Vauxhall boss: “We need to make vehicles with greater appeal”

Ferrari has revealed the 488 Pista Spyder at Pebble Beach Concours d’Elegance in California, with identical performance to the coupé.

Power comes from the same 90deg twin-turbo 3.9-litre V8, with Ferrari claiming that the car is its most technologically advanced drop-top to date, despite the relatively recent introduction of the ultra-exclusive LaFerrari Aperta hypercar. The car is 100kg heavier than the coupé, at 1380kg dry to the coupé’s 1280kg.

During the car’s development, the designers main brief was for the car to stay as true to the coupé’s aerodynamic efficiency as possible, so as to not alter the car’s performance.

It’s also got the same Ferrari Dynamic Enhancer system as the regular 488 Pista, which adjusts brake pressure at the calipers to improve cornering.

Lightweight materials have helped keep the car’s weight down, including using straps instead of traditional interior door handles. The carpets are also stripped out and replaced with aluminium foot plates.

Lack of roof aside, the car’s new 20in star-effect wheels mark out the Pista Spyder, while the Pebble Beach car was finished in an exclusive new livery.

It’s expected to cost well in excess of the coupé’s £252,695 price before personalisations, although Ferrari hasn’t yet released an official figure, nor a number on how many are planned to be made.

Is the Ferrari 488 Pista the best supercar yet? 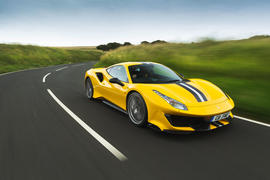 Yes, for once a White Ferrari looks ok, maybe it’s the Blue accents that help?

Perfect for long routes but not for every journey. Best color ever.

I’ll take two. I trust a post-dated cheque will be more than sufficient?

There's absolutly no way this car has the same performance as the coupe, it's 100Kg heavier and doesn't have the same aero. I like this line "During the car’s development, the designers main brief was for the car to stay as true to the coupé’s aerodynamic efficiency as possible, so as to not alter the car’s performance" all they've done is take the bits off the coupe and put them on a spider, no increase in power to account for extra weight no extra aero pieces to account for the turbulance around the top.

A beautiful car, and the perfect reward for those fortunate enough to build up a collection of Ferrari cars.

Built for those who love and cherish and enjoy their cars, not for people who want to flip it instantly to make a quick £100k profit (or more)