From £159,9258
Rampantly fast and sharper than any other car of its type, the Urus is a harder-edged SUV. It's too heavy to thrill like a sports car, though
Close

Whatever you think of the Lamborghini Urus - even if you find it so objectionable that you can hardly bear to look at these photographs - you must arrive at your opinion of it availed of two pieces of information.

The first is that it's right and proper that this car exists at all.

Lamborghini is no less a money-making concern than a house builder or an accountancy firm, and for it to overlook a vast and growing sector of the market on grounds of, I don’t know, some sort of imagined sacrosanctity, or respecting Ferruccio’s legacy, or whatever, would be a weird sort of onanism.

Porsche, Maserati, Bentley, Rolls-Royce and the rest build SUVs of their own, and Lamborghini would be mad to watch them gobble up the pie while it sat back and congratulated itself on being so singularly faithful to the supercar cause. Lamborghini says the Urus could double its output to 7000 units a year, which sounds like very good business. And Lamborghini, unlike the others, does at least have some sort of heritage in off-road vehicles.

Of course, it's possible to be fully aware of all that and still find the high-performance SUV thing entirely depressing. This is simply where the automotive industry finds itself in 2018.

You might just think the Urus is the most wonderful car since the turn of the millennium, though, in which case the second piece of information will make you very happy indeed. That is, Lamborghini’s SUV is very good. It really is. If you listed the 10 or 12 things a car like this should be able to do, you couldn’t honestly say the Urus was bad at any one of them.

With that out of the way, let me tell you something else about this car. Lamborghini reckons it's the first ever super-SUV, which isn’t an unreasonable claim, and it's so loaded up with technology and hardware that it’s quite surprising you don’t have to attend a two-day course simply to operate it.

It has active torque vectoring, four-wheel steering, a rear-biased centre differential, adaptive air suspension and active anti-roll bars, all of which is there to make the car as agile as it can possibly be. It also has staggered tyres front to rear and plenty more besides.

On top of that, it has the least ambiguous remit of any high-performance SUV so far: be great to drive along a winding road. It is a Lamborghini, after all. 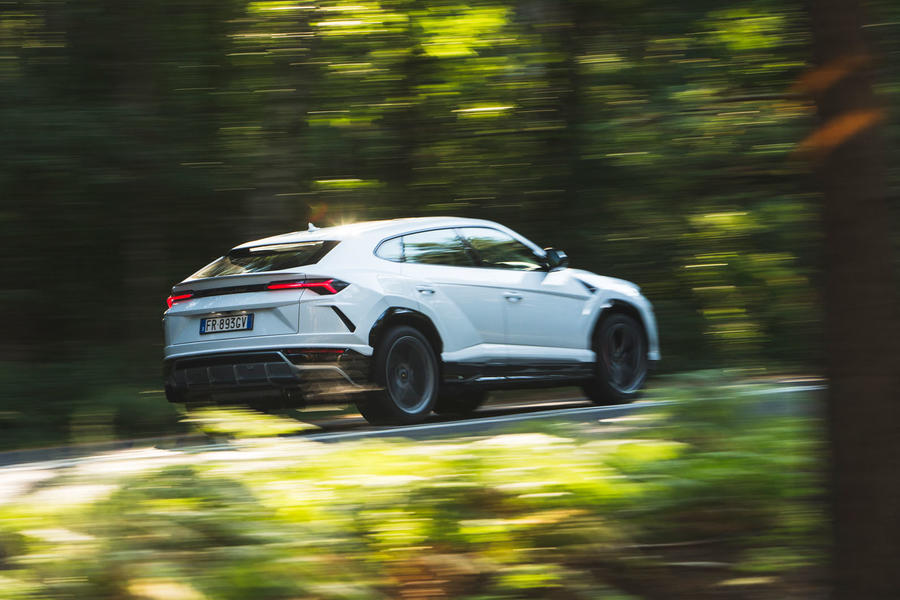 And it's great to drive - for an SUV - but what it absolutely isn’t is fun, or engaging, or rewarding, or interactive. Not in overall terms, not in the way a purpose-built sports car can be.

Which, to me, demonstrates a point: if the Urus isn’t the kind of car that will make you wake up early on a Sunday morning just to go for a drive, no SUV ever will be. They are simply too high-riding and too heavy, and no amount of technology or hardware can get around that.

There’s no doubting the Urus has presence, but to my eyes, the detail styling is overwrought, particularly around the fussy front end, while the slightly contrived coupé roofline just doesn’t look right. Meanwhile, the interior is spacious - although the rear seats may be a little claustrophobic for really tall passengers - and the quality throughout is very good indeed. It feels solid in there.

A pity, though, that anybody at all familiar with other premium Volkswagen Group products could pick out component after component that's shared across the group. Lamborghini has at least tried to give the cockpit a bespoke feel with the drive mode and gear selector mechanisms, but I’ll leave you to decide how tasteful you think they are.

Inevitably, the Urus has a more connected, less isolating ride quality than the Porsche Cayenne or Bentley Bentayga. On smoother roads, the ride is fine, but even on rougher sections it isn’t unduly harsh.

One of the main reasons for testing this car extensively in the UK is that our sometimes appalling roads might well have been its undoing. As it is, the Urus - on 22in wheels rather than 23ins, the largest available - feels busy and tense over the worst stretches of Tarmac, without being hopelessly uncomfortable. At least that’s true in Strada mode, in which the air suspension is at its most pliant, and just about in Sport mode, too.

In the firmest setting, Corsa, the ride does go to all hell on anything other than super smooth asphalt. There's also what Lamborghini calls Ego mode, incidentally, which allows you to adjust the various parameters independently.

The Urus's seating position is very good, because while you sit high above the road surface, you do so in much the same repose as you would in one of the company’s more on-brand models. That is, you feel snug with the bodywork rising up to meet the glass somewhere around your shoulders, while the steering wheel reaches out towards your chest. It’s a sports car seating position, just a couple of feet higher up.

When you start pushing the Urus a little harder, then, it doesn’t feel completely alien. You start hustling the car, despite its size and weight, with much the same confidence you’d feel in a more overtly sporting car.

The steering is a highlight. It's electrically assisted, of course, and therefore not remotely communicative, but it is precise, consistent and so natural in its rate of response down at the front axle that you pour the car into corners more instinctively than you do in any other SUV. There's just enough body roll to let you know you’re working the chassis, masses of grip on turn-in and even, when you chuck the car around a little bit, a sense of balance, of harmony between the front and rear axles. The Urus doesn’t merely plough on in hopeless understeer, at least not at road speeds.

Away from corners, there's athleticism and agility, but not any real playfulness, despite the rear-biased four-wheel drive system and active torque vectoring. Again, not at road speeds, anyway. Body control is exceptionally good for a car of this size, meanwhile.

What of the Audi RS6-sourced twin-turbocharged petrol V8? It’s a monster, frankly, and with its bundles of low-rev torque, it's very well suited to a car like the Urus. Throttle response is sharp, the rate of acceleration under full load in second gear is more unsettling than that of any other SUV you care to mention and the soundtrack, while clearly manufactured and programmed, is at least quite amusing.

The automatic transmission, meanwhile, is smooth and refined when left to do its own thing, but when you take control yourself you're aware of a slight delay between tugging either paddle and the shift actually happening. 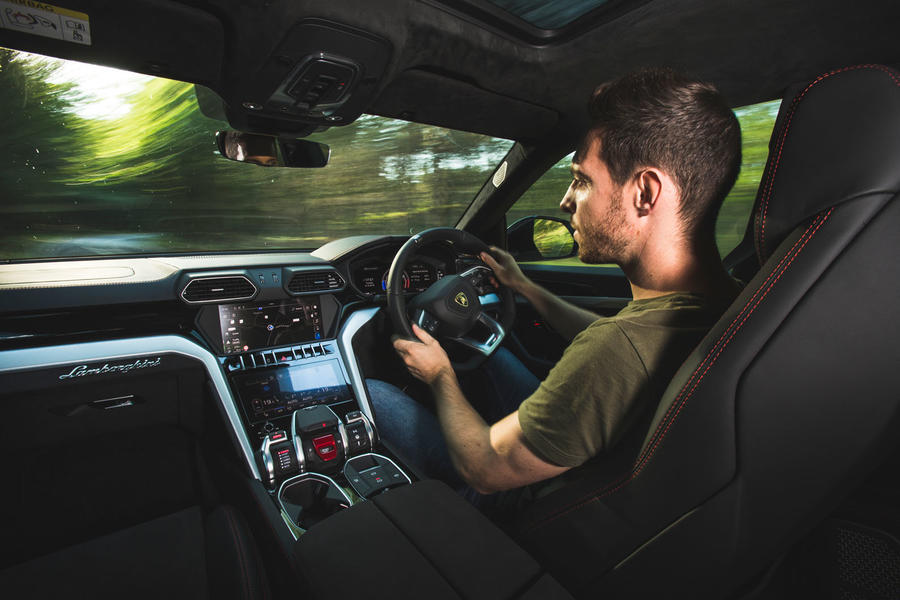 It was only a matter of time before Lamborghini claimed its slice of the SUV pie. And like it or loathe it, the Urus is at least the sportiest and most agile car of its type. 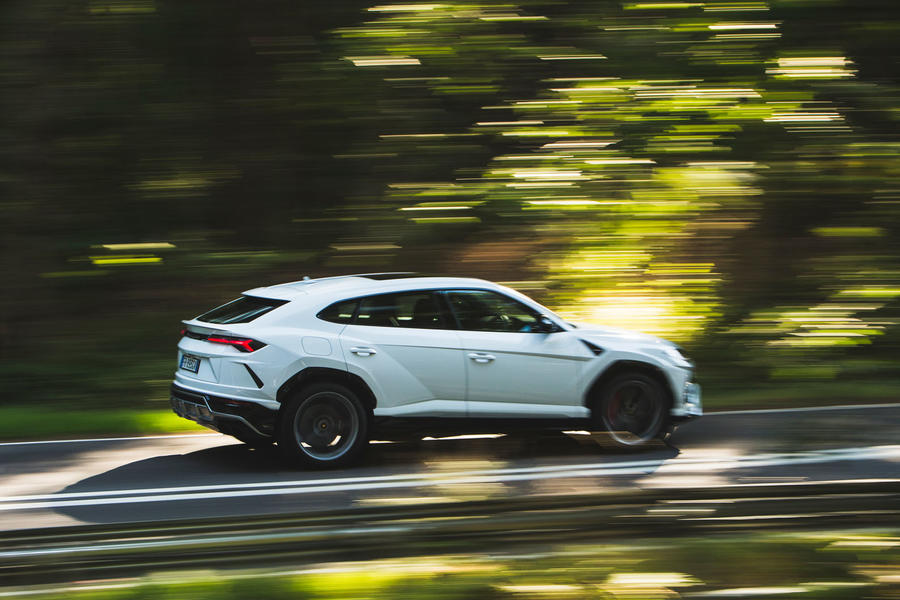 See the new WLTP figures are realistic then, 23mpg either 'my ar$£' or 'a miracle of engineering'.

23 August 2018
Am I the only one who thinks this looks like either a Renault or Citroën crossover. All it would take is a badge swap and no one would be the wiser.

...it is not a "purpose-built sportscar" like. Hopefully there will be fewer morons on the roads  pretenting it is. It's a 2.2 tons wide TRUCK, with too much horsepower for the tits that will drive it.

So not me.  Can't wait for the Youtube fails.  It's becoming very difficult for the wealthy to spend their money tastefully.

I'm near Monza and has just

I'm near Monza and has just seen one 10 mn ago. Another boring panzer...

A positive note. Go to the

A positive note. Go to the Alfa Romeo museum in Arese !

First a justification for its

First a justification for its existence, and then an assessment that seems to damn this vehicle with faint praise - and all for a bargain starting price of £160k! Still, there’s obviously a niche market for such a contraption.

24 August 2018
Possibly the most hideous, cynical, hateful, loathsome VAG. And it's got a LOT of competition!