BACK TO ALL NEWS
Currently reading: 2019 Toyota RAV4: prices confirmed for fifth-generation SUV
UP NEXT
Lotus confirms new sports car, end of Elise, Exige and Evora in 2021

Toyota has opened order books for the new RAV4 SUV, ahead of deliveries early next year.

Front-wheel drive models will arrive in dealerships first in April, with prices starting from £29,635 for an entry-level Icon model. All-wheel drive models are set to follow in May, starting at £33,430 for a step-up Design model and reaching £36,640 for a top-end Dynamic. All models use Toyota's 2.5-litre hybrid petrol engine and CVT gearbox.

The RAV4 made its European debut at the Paris motor show with a promise from its chief engineer, Yoshikazu Saeki, that "it will be more of a proper SUV" than the car it replaces.

Even though the current RAV4, a rival to the Ford Kuga and Nissan Qashqai, has become the best-selling car in North America, beaten only by pick-up trucks in the sales charts, Saeki is setting his sights even higher. "I don’t believe the current car was very successful at all. I’ll consider a car to have been successful when there are no further advancements to make."

The upcoming RAV4 is not only based on Toyota’s new TNGA platform but moves up a size and now sits on underpinnings more closely related to the large Camry saloon than that of a Prius. One engine is available at launch, a 2.5-litre hybrid producing 215bhp in front-wheel drive models and 219bhp in four-wheel drive cars. CO2 emissions are 102g/km and 103g/km for front- and four-wheel drive models respectively. 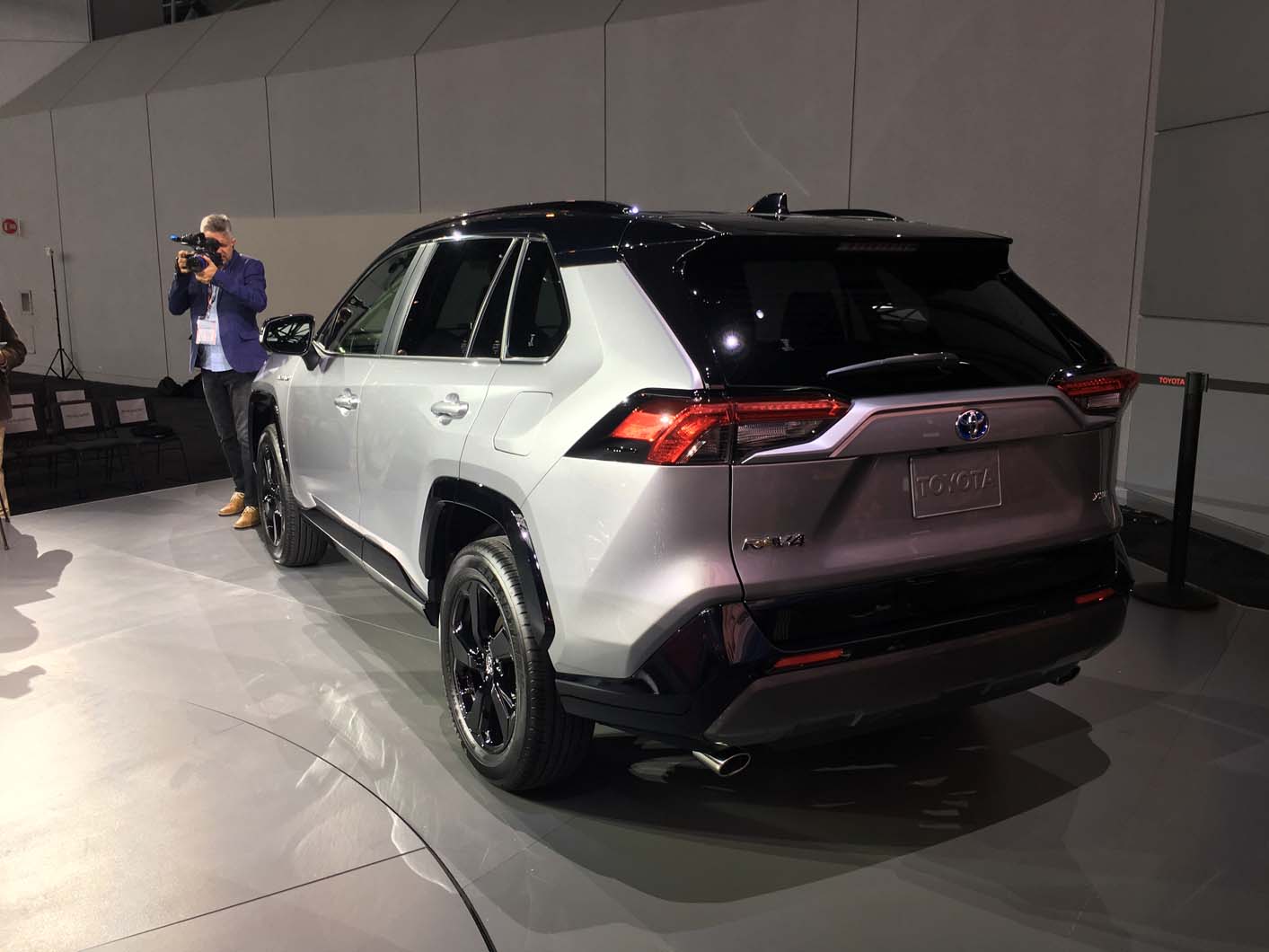 The hybrid engine is very similar to the the unit in the Camry, where it produces 204bhp, a 10% increase over the previous engine. In the Camry, it improves fuel consumption over its predecessor by 20-30%. This should ensure Toyota is able to claim combined consumption for the RAV4 of close to 70mpg, with a sub-100g/km CO2 output by current means of measurement.

In the absence of any diesel model (Toyota has pledged to phase out all oil-burners before the year's close), a second hybrid powertrain is expected to be offered after launch, but it's not yet known whether it'll be of 1.8-litre or 2.0-litre capacity. Both of those engines are offered with the recently revealed Auris.

Compared with the current car, the upcoming RAV4 is wider and sits on a longer wheelbase to improve ride quality and interior space, but it is both shorter and lower. The cabin has a far more luxurious feel, a raft of additional sensor and radar-based active safety systems and a bigger boot.

Whether that is enough to displace the Qashqai as Britain’s best-selling compact SUV remains to be seen. Much will depend on Toyota’s bet that diesel will shortly cease to be a major player in the market. The brand is so set on this plan that it has ditched several diesel models in recent months, including the slow-selling Auris diesel.

What was your chief priority when engineering this car?

"My biggest issue was to bring to back to being a true SUV. I want to focus on it being an SUV everyone can rely on, wherever they live, whatever the conditions they find. It may be that very few customers use it off road, but it is important to me that they know that they could and that the car would be tough and capable enough to cope with it."

What do you say to customers who still want an SUV with the engine characteristics of a diesel?

"The new hybrid gives great fuel consumption and also responds perfectly to driver inputs, which is not possible with normal petrol engines."

Will there be a plug-in hybrid version?

"We are not currently working on a plug-in for the RAV4 because we need to consider the power, performance and pricing of such a car and how it fits into this class. I don’t think that balance has yet been made. But the technology is easy to convert, so when the conditions are right we can consider it quite easily."

Will the new RAV4 be more fun to drive?

"Of course! With our Takumi master craftsman system, our drivers have developed the driving characteristics of the car not based on data but human feel; steering feel and chassis feel are now very important to us and that is a philosophical shift from the last car."

Is the car lighter than the previous RAV4?

"It is 4% lighter, despite being packed with additional features and functions that were not available in the previous car."

Will there be a more high-performance version in future?

"Now that we have our new hybrid and can combine it with a sports chassis, we can in future develop the car further in this direction."

Too big, too ugly.

Too big, too ugly.

It’s as if the designed it by committee, and they couldn’t agree, so they each got to put there design on it.

I'm not sure how this redesign will appeal to women.  It comes across as a very 'masculine' vehicle, and the current design is popular with women.  I'm not a fan of the redesign, and would've kept the '18 style with upgrades where needed, e.g. infotainment system; driving dynamics; engine upgrades ergonomics, etc.  We'll have to wait and see how well this redesign is received.  I may well be in the minority; opinion-wise.