BACK TO ALL NEWS
Currently reading: US-built LM2 Streamliner supercar to be revealed in New York
UP NEXT
Niels van Roij Design unveils tribute to Ferrari 'Breadvan'

US-built LM2 Streamliner supercar to be revealed in New York

The LM2 Streamliner, which is powered by an 8.2-litre twin-turbocharged V8 engine, is claimed to have an estimated top speed of 290mph. Its makers claim the car can reach 60mph in 2.2sec, 100mph in 4.1sec and 200mph in 11.85sec. The V8 engine produces 1610lb ft. Drive is sent to all four wheels by a seven-speed sequential transmission.

Those heady performance claims put the LM2 Streamliner into direct competition with more established names such as Koenigsegg. Lyons Motor says the LM2 streamliner also gets a 16in touchscreen infotainment system inside. The car’s aerodynamic bodywork is made from carbonfibre.

The company says it is the first car manufacturer to be based in New York city for 70 years and that the LM2 Streamliner will “counter the best performing and exclusive vehicles from Europe, Asia and beyond have to offer.

"The LM2 Streamliner is not only an engineering tour de force; it is a masterpiece equivalent to fine art.” 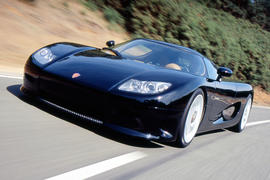 Back in 2002, Sweden's first supercar came with promise of McLaren F1-style performance for a much lower price. Could it deliver?

Another US start up firm trying to out do established European hypercar offerings with a highly charged, high capacity V8 and hugely boastful performance claims. This should be interesting, let's step back a moment and see how this pans out......... Oh there we go............ Nowt, the whole thing never made it off the piece of fag paper it was developed on.
Andrew Lee 26 March 2015

(And that's just the company font).
View all comments (10)