BACK TO ALL NEWS
Currently reading: 2017 Audi A5 Cabriolet unveiled ahead of LA motor show
UP NEXT
BMW opens door to M1-inspired electric supercar

2017 Audi A5 Cabriolet unveiled ahead of LA motor show

The Audi Audi A5 Cabriolet has been revealed prior to making its official public debut at the Los Angeles motor show on 14 November.

Due to reach the UK in March 2017, the four-seater A5 adopts the same platform as its fixed roof sibling, the recently introduced A5 Coupé. With increased use of hot-formed high-strength steel, the so-called MLB Evolution structure is claimed to provide a significant improvement in overall rigidity compared to the earlier platform, providing the new A5 Cabriolet with more agile handling and greater levels of comfort than before. 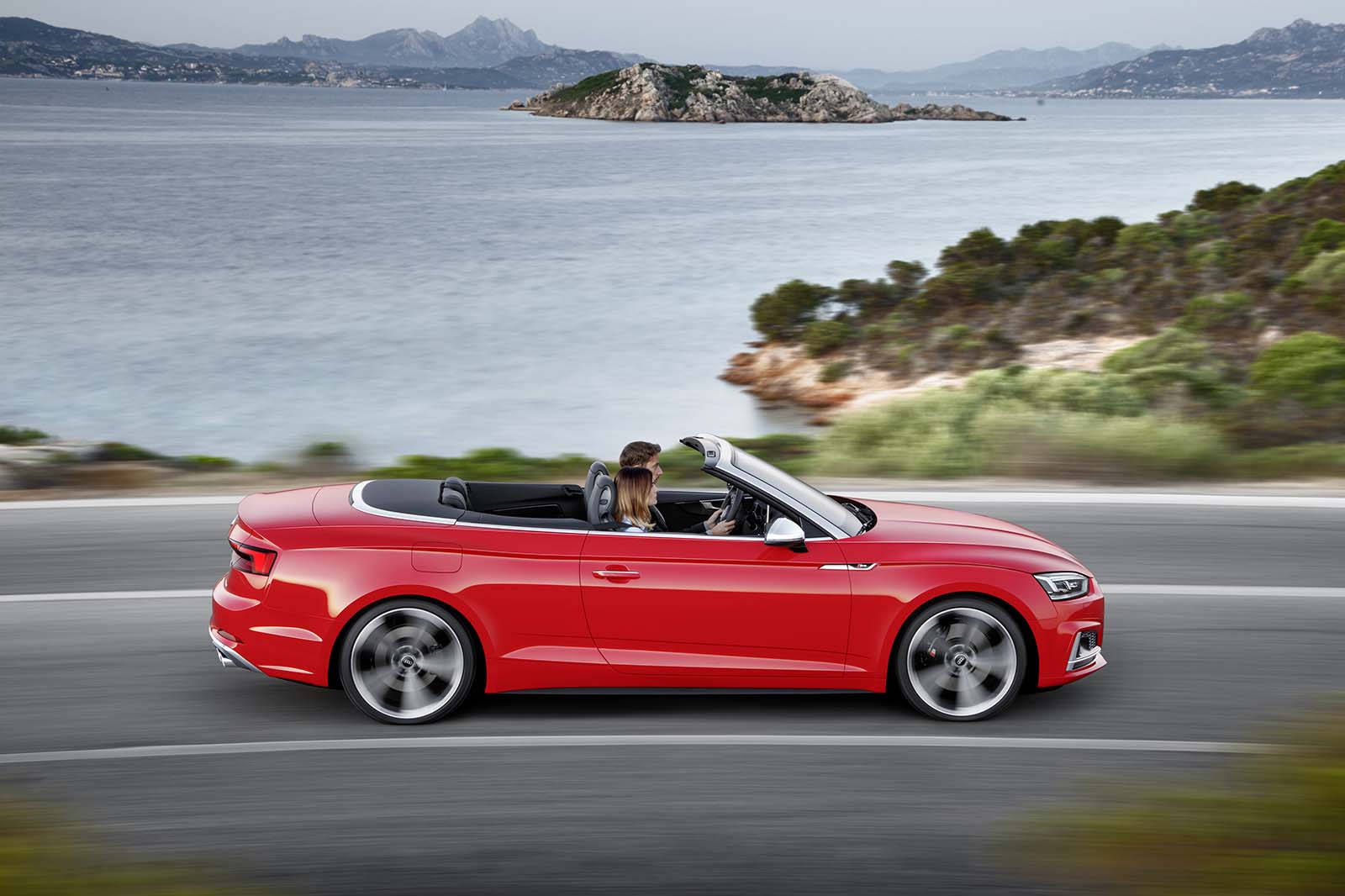 Sharing its exterior styling with A5 Coupé, the A5 Cabriolet also features a newly developed roof with one-touch automatic operation. It opens in a claimed 15sec and closes again in 18sec at speeds up to 31mph. A new manufacturing process is said to endow the multi-layered structure with vastly improved aeroacoustic properties in a development claimed to reduce interior noise levels at motorway speeds.

With a length of 4673mm, the new A5 Cabriolet is 47mm longer than its predecessor. Its wheelbase is extended by 14mm over the old A5 Cabriolet's 2795mm. This has led to an 18mm increase in rear-seat knee room. It also contributes to an improvement in interior packaging that has helped liberate an extra 60 litres of boot space when the roof is closed at 380 litres. Aiding storage of longer items is a standard 50/50 split-fold rear seat.

Among the standard features for the new Audi is an automatically opening bootlid. It's operated either via the remote button on the key fob or a button on the driver’s door. Alternatively, buyers can optional the new A5 Cabriolet with a gesture control function that opens the boot lid when a sensor detects the movement of your foot underneath the rear bumper when the car is stationary. 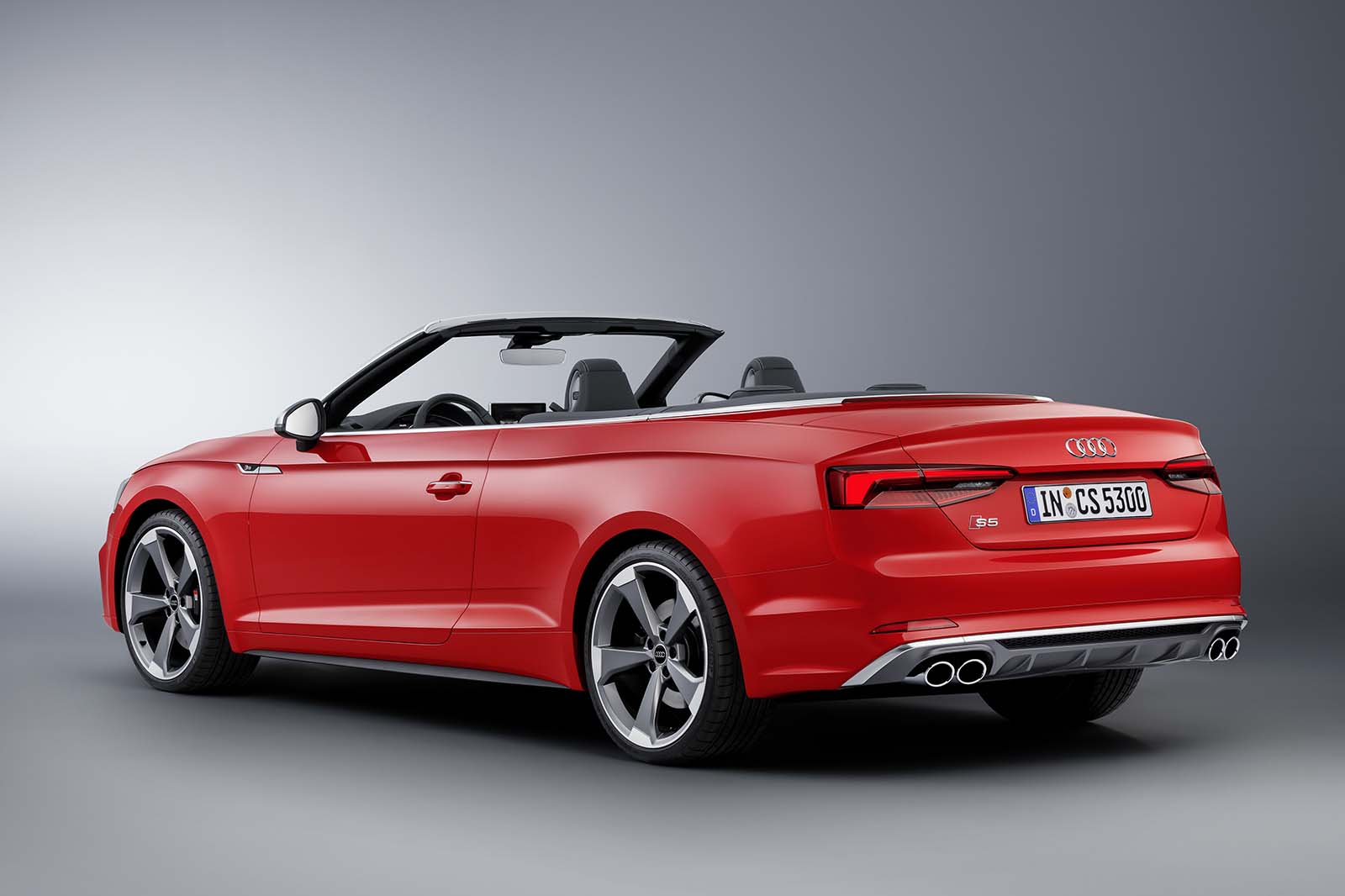 Torsional rigidity up 40% over predecessor

Audi claims the body of its latest open top model is the stiffest in its class, with torsional rigidity up by 40% over the old A5 Cabriolet. Among the measures brought to the structure to offset the lack of a fixed roof structure are reinforced sills and additional strengthening within the bulkheads. Safety is also enhanced by the inclusion of rollover beams that deploy from behind the cabin in the event of the car rolling over, as well as head-thorax side airbags within the door linings.

Despite its added body stiffness, Audi says the new A5 Cabriolet is also the lightest car in its segment, with the front-wheel drive A5 Cabriolet 2.0 TDI claimed boast a 40kg reduction in kerb weight over its direct predecessor at 1690kg.

The A5 Cabriolet will be sold with the same engine line-up as the new A5 Coupé, together with three different gearboxes and either front or four-wheel drive. 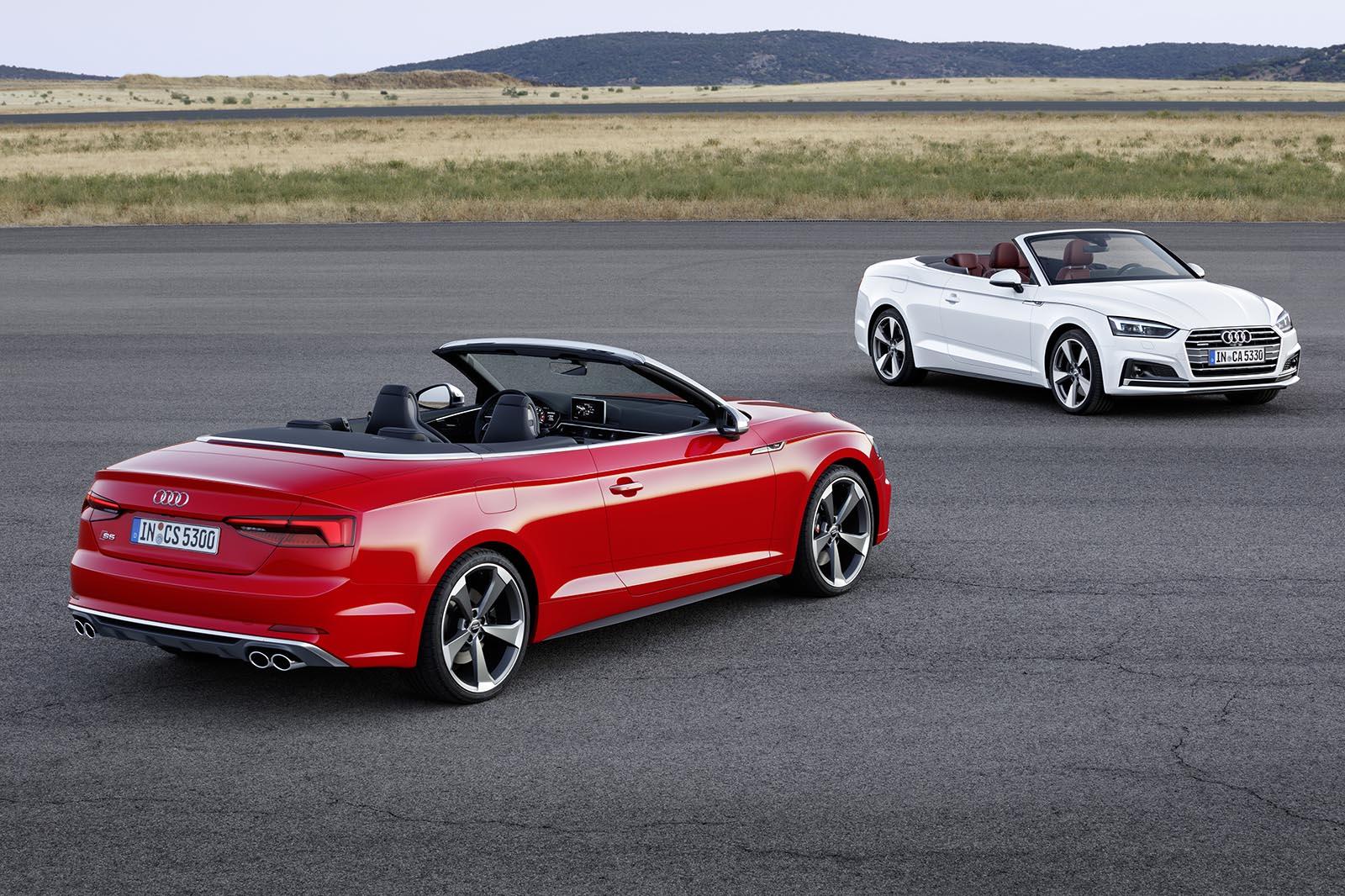 Alongside the A5 will be the more performance-oriented S5 Cabriolet. This gets Audi’s newly developed turbocharged 3.0-litre V6 engine with 349bhp - some 21bhp more than its predecessor’s supercharged 3.0-litre V6. With an eight-speed torque converter automatic with Tiptronic shift controls and the latest evolution of Audi’s Torsen torque-sensing quattro four-wheel drive system fitted as standard, it is claimed to hit 62mph from standstill in 5.1sec and have a limited top speed of 155mph.

Audi's S5 Cabriolet has been spotted testing - read about it here

Audi says the engines offered in the new A5 Cabriolet develop up to 17% more power while consuming as much as 22% less fuel than the units used by the outgoing first-generation model, which launched in the UK in 2009.

Depending on the engine, buyers will be able to choose between either a standard six-speed manual, seven-speed dual clutch or eight-speed torque converter automatic gearbox.  All models save the more powerful 3.0-litre TDI and S5, which both receive quattro four wheel, are sold as standard with front-wheel drive. 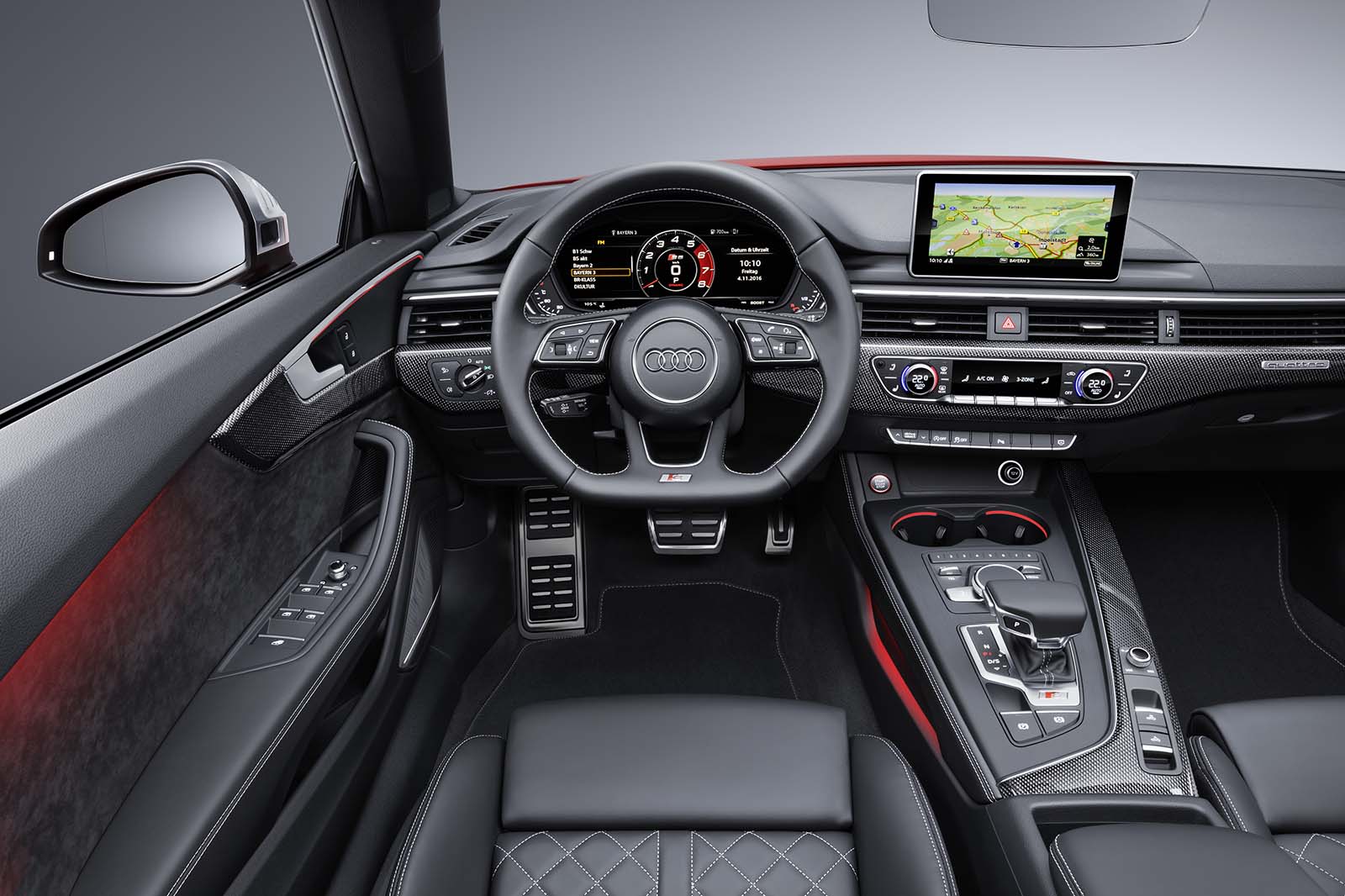 Inside, the A5 Cabriolet gets the same dashboard and many of the same interior appointments featured on the latest A5 Coupé. As an alternative to standard analogue instruments, buyers can specify the new car with an optional 12.3in high-definition Virtual Cockpit digital instrument display as well as a head up display unit.

An optional LTE module provides access to online services, while a wi-fi hotspot provides connectivity to the internet.  The top of the range MMI (multimedia interface) touch connectivity package gets an 8.3in monitor with a resolution of 1024x480 pixels. It comes with a DVD drive, 10GB of flash memory, two car readers, and aux-in and USB connections.

Also under development at Audi’s Sport division, but yet to be officially confirmed, is a headlining RS5 Cabriolet. Planned for launch during 2017, it is earmarked to run a twin-turbocharged 2.9-litre V6 developed in partnership with Porsche in place of the naturally-aspirated 5.2-litre V8 used by the old RS5 Cabriolet.

UK specifications will follow the same SE, Sport and S line grades as the Coupé, while the S5 gets 19-inch alloy wheels, S specific styling and upgraded Super Sports seats. British pricing has yet to be confirmed, but in Germany the A5 Cabriolet will start at 49,350EUR (£43,800) and the S5 Cabriolet at 67,800EUR (£60,300).

I really want one

Their first cabrio I declined to buy because scuttle shake and window rattling on the demo left me in tears. Twenty years on I think the S5 would be perfect. Now which bank should I rob cos 65 k is a big suitcase
Nikolai_K 4 November 2016

Uhm, no.
You don't get it- the door panel blends into the curved line running along the top and framing the whole dashboard. Your idea about how it should've been done is actually worse - try a Photoshop experiment if not convinced.
abkq 4 November 2016

The interior photo clearly shows the door pull plate (not the door panel as a whole) stops just short of the A - pillar, in fact, in the middle of nowhere. I've just checked the Autocar photo and it's just as I described.
abkq 4 November 2016

Minor detail, major irritation - the way the surrounding plate of the door pull on the interior door panel sticks out and deliberately fails to connect up with the edge of the dashboard, overshoots the dashboard and terminates nowhere in particular - Awful, awful, awful !
The A4 suffers from the same inexcusable styling quirk. I wonder how many sales are lost because of this. This plus that dreadful Octavia facelift, what's going on within VW?