BACK TO ALL NEWS
Currently reading: Mercedes-AMG GT R teased on video ahead of Goodwood
UP NEXT
New 2022 BMW 3 Series brings redesign and tech upgrades

Mercedes-AMG GT R teased on video ahead of Goodwood

Mercedes-AMG will launch a hardcore variant of its GT sports car at this year's Festival of Speed; its V8 will produce around 570bhp
Open gallery
Close

The hotly anticipated Mercedes-AMG GT R has been officially teased with a new video following a leak of images onto the internet ahead of its world debut at the Goodwood Festival of Speed this June.

The AMG GT R has now been revealed. Read about it here.

Four dimly-lit photos reveal little more than that the new model will evolve the already muscular exterior of the regular GT, but do at least suggest that an earlier Autocar rendering (the fifth picture in our gallery) was quite accurate.

The track-inspired version of the range-topping GT has been spotted on several occasions development testing in the cold climates of the Arctic Circle, as shown by the other images in our gallery.

Reflecting its track focus, the GT R receives a number of functional aerodynamic upgrades aimed at improving airflow to and from the engine bay, as well as increasing the downforce acting on the front and rear axles for improved stability and cornering speeds.

The GT R has a new front bumper that features a prominent splitter element, along with an enlarged central air duct and altered secondary ducts on each side.

These are joined by a modified duct within the trailing edge of the long front wings, wider rear wings and a boot-mounted carbonfibre rear wing. In addition, there is a new rear bumper that houses a horizontal air duct to extract hot air from the rear differential, a large hexagonal-shaped central exhaust and a reworked dual-channel diffuser.

However, the most distinctive stylistic change is the adoption of what Mercedes-AMG officials describe as a new Panamericana grille originally unveiled on the track-only GT3 race car late last year.

Inspired by the grille treatment of Mercedes-Benz’s 1952 SL Panamericana race car, it features an altered shape along with 15 vertical slats among the familiar three-pointed star emblem. The effect is to give the GT R a more instantly aggressive presence than the standard GT. 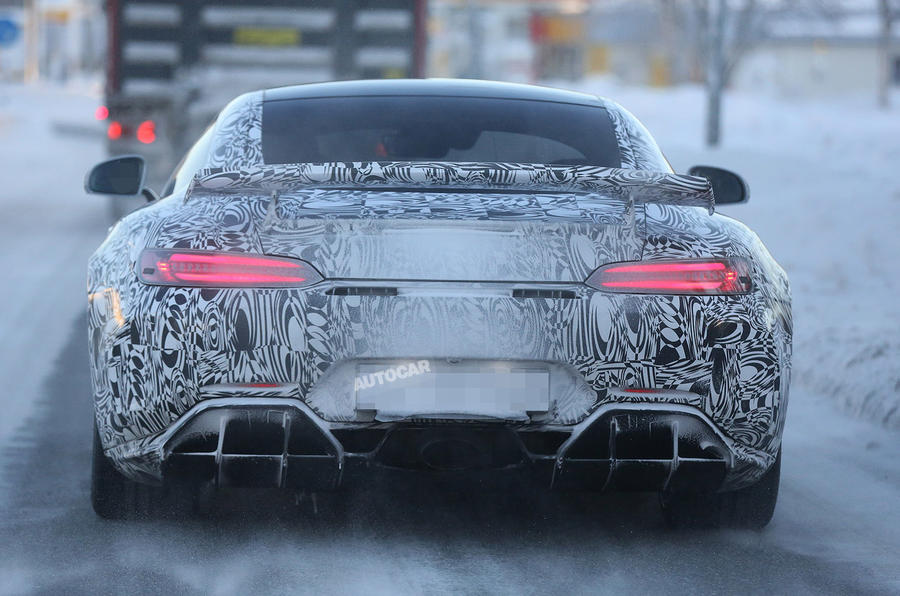 According to a leading member of the Mercedes-Benz design team, the new grille is set to become a signature element of future AMG models, replacing the blade-style treatment of today’s models.

As part of efforts to reduce the kerb weight of the GT R below the 1570kg of the GT S, its bonnet, wings and bootlid are made from carbonfibre. Although the GT R has yet to undergo certification at the hands of the German Transport Authority, AMG insiders hint that weight has dropped by up to 60kg, suggesting it will hit the scales at around 1520kg in production trim.

By comparison, the smaller but less powerful 911 GT3 RS has a kerb weight of 1420kg.

The weight-saving touches continue inside, with the GT R sporting a lightly reworked version of the standard GT S’s dashboard and manually operated seats, among other changes.

Details remains scarce ahead of the new model’s unveiling this summer, but sources close to Mercedes-Benz’s performance car division say the M178- designated V8 will pack in the region of 425kW. This equates to 570bhp, which would give the new GT R at least 60bhp more than the GT S. 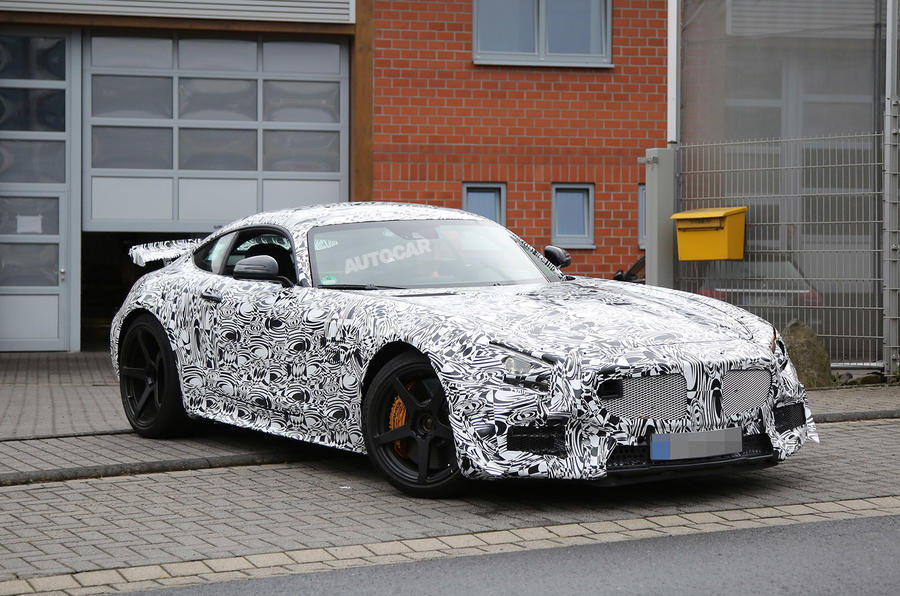 AMG’s powertrain engineers, headed by Christian Enderle, have also raised the torque loading of the 90deg V8. Again, nothing is official, but Autocar has been told the new track-focused model is to receive up to 552lb ft, or some 70lb ft more than the less highly tuned version of the engine used in the GT S.

To put this into perspective, the naturally aspirated 4.0-litre flat six engine used by the latest 911 GT3 RS kicks out 493bhp and 384lb ft. The added reserves of the GT R are channelled through a strengthened version of AMG’s seven-speed dual-clutch automatic transaxle gearbox. It features revised ratios and a recalibrated electronically operated rear differential.

Although development has focused more on providing the GT R with added circuit prowess than outright speed, the new model is expected to undercut the straight-line performance of the GT S, which has an official 0-62mph time of 3.8sec and a 193mph top speed.

The underpinnings have also been suitably upgraded, with adjustable springs and dampers, revised bushings up front and a rear axle that is bolted directly to the body structure. The wheels have a diameter of 19in up front, with 275/35 tyres, and 20in at the rear, with 325/30 tyres.

The introduction of the GT R later this year will not be the final flourish for AMG’s high-performance coupé. Plans also call for the launch of an even more powerful GT Black Series next year, as well as a GT Roadster in 2018.

What an amazing vehicle. Cannot wait for this car to be released and get one in our fleet. Love all the detail. That is what makes this car.

We are a luxury car hire company called Phantom Hire, to see more about ourselves and the services we offer, visit us at - www.phantomhire.com

Certainly the most purposeful

Certainly the most purposeful looking Merc sports car yet (looks like it's been developed to look like that, rather than styled).

Still has the auto gearbox though. Considering Aston's announcement the GT8 will have a manual as an option and Porsche stating the next Gen GT3 will too, surely Mercedes must consider this too.

Certainly the most purposeful

Certainly the most purposeful looking Merc sports car yet (looks like it's been developed to look like that, rather than styled).

Still has the auto gearbox though. Considering Aston's announcement the GT8 will have a manual as an option and Porsche stating the next Gen GT3 will too, surely Mercedes must consider this too.