The new Jaguar XE SV Project 8 will run at this week's Goodwood Festival of Speed as “the most track-focused, road-going, uncompromised performance car that Jaguar has ever made” - according to Jaguar Land Rover Special Operations boss John Edwards.

The £149,995 Project 8 is a heavily modified, track-biased reworking of the XE saloon that has been designed to reach 200mph. It is the second ‘Collector’s Edition’ model produced by JLR’s Special Vehicle Operations division and the first to be built entirely at the SVO division’s Technical Centre near Coventry.

When developing the Project 8, SVO’s goal was to produce the quickest and most powerful road-going car that Jaguar has built.

As well as the 200mph target — 45mph more than the fastest production XE — the Project 8 was also tasked with an ability to set competitive lap times on a racing circuit, although the firm hasn’t publicly specified a time target for any given circuit.

SVO started developing the Project 8 last August and the car that will run at Goodwood this week is the second development version. The aim is to have the car signed off around September, with deliveries starting in May 2018.

It has already been tested at a range of competition venues, including the Nürburgring Nordschleife, and Jaguar is understood to be preparing for a lap record bid at the German circuit later this year. The firm’s desire to test it at race circuits is one reason why it has unveiled the high-performance XE to the public before the car has finished development. 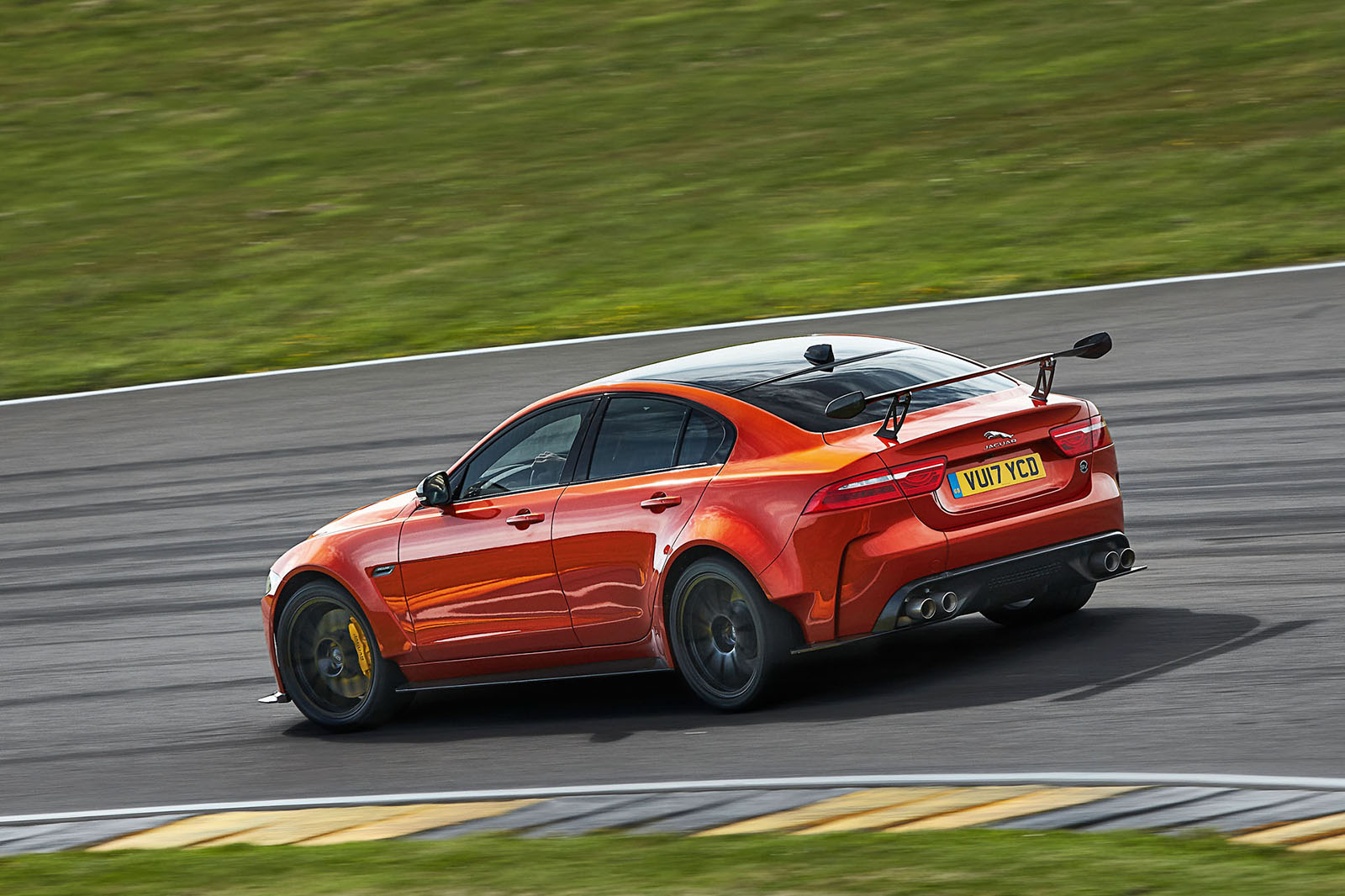 The Project 8 has a downforce-producing adjustable front splitter, a flat underbody, a rear diffuser and carbonfibre bumper, and an adjustable rear wing.

Although the exterior looks broadly similar to the regular XE, it has been extensively reworked: 75% of the bodywork is new, with only the front doors and roof unchanged from the production models. In particular, the front headlights have been moved forward by 14mm to allow for extra cooling and engine work.

The Project 8 is fitted with a bespoke carbonfibre bonnet, which is 3kg lighter than the production version and includes an air extraction duct for extra engine cooling.

The wing panels around the rear wheels have been widened by 55mm to accommodate the 305-width tyres and also to help with the aerodynamics. The revised panels required SVO engineers to also install custom-made rear doors.

The car’s exterior was honed through wind tunnel testing and computational fluid dynamics simulations. Jaguar says it has achieved a 205% reduction in lift in Track mode, with the car producing more than 122kg of downforce at 186mph.

Edwards said the emphasis on aerodynamic performance meant that “form follows function” where the bodywork is concerned. The exterior design was headed by Wayne Burgess, Jaguar’s production studio director, who said he took inspiration from Group B Lancia Delta Integrale rally cars. “It was a homologation special that linked a really powerful engine with all-wheeldrive transmission in a compact saloon body,” he said. “Project 8, for me, is that concept taken to its logical extreme.”

As well as the reworked engine and transmission, the XE SV Project 8’s mechanicals have been heavily reworked to boost performance. It is the first XE to feature an electronic active differential, which works with the Intelligent Drive Dynamics to manage torque delivery to the rear axle of the four-wheel drive system. The transmission has been reworked to deliver about 75% of the power to the rear wheels as standard. 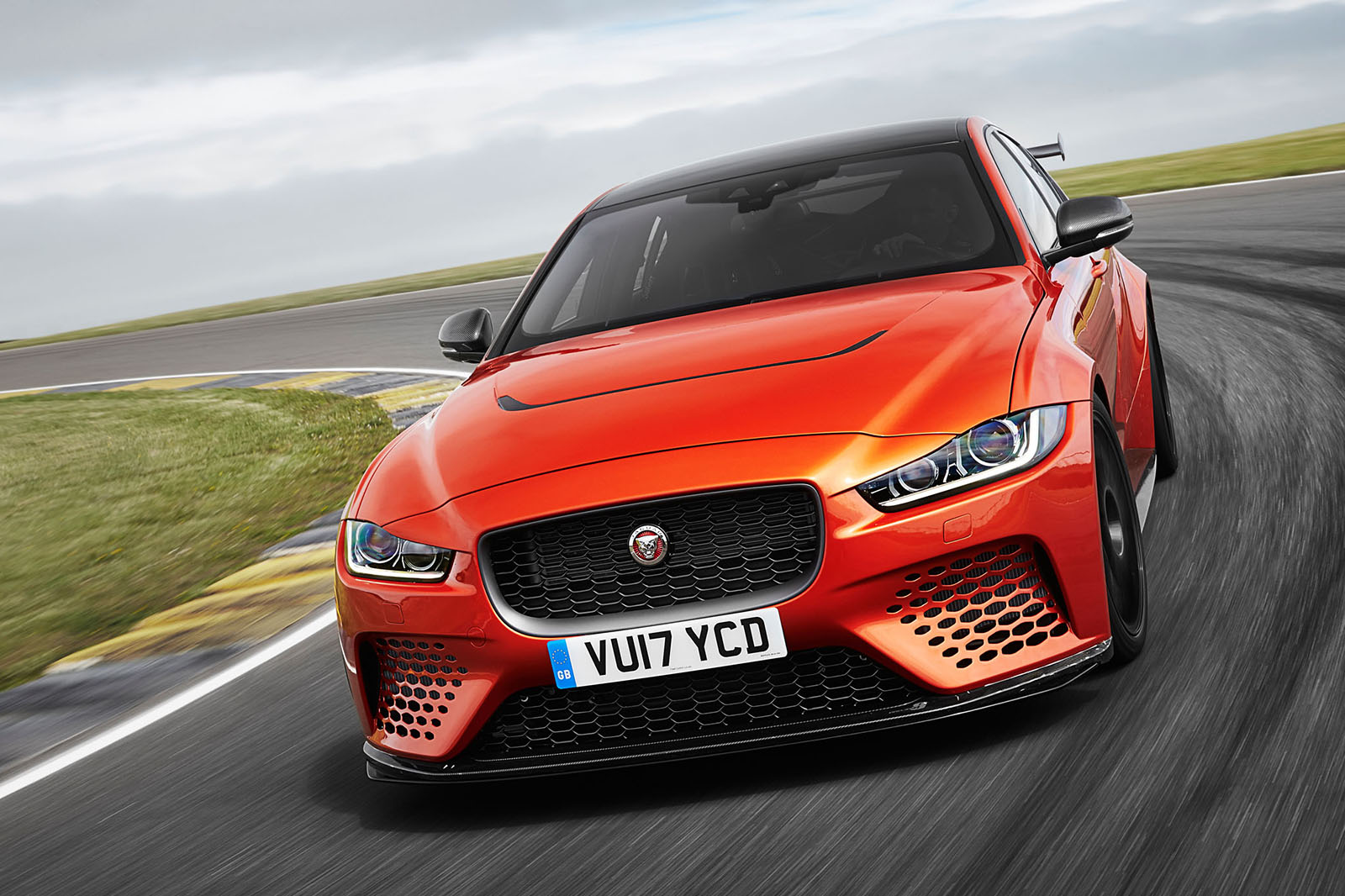 The car features three drive modes: Normal, Dynamic (the default setting) and a new Track mode, which will adjust the engine map, dampers, steering and throttle for optimum performance.

There is double-wishbone front suspension, with an integral-link set-up at the rear, and the front and rear axles have been modified to boost lateral stiffness. Custom knuckles designed by SVO are machined from billet, with silicon nitride ceramic bearings to reduce unsprung mass by 840g. That is the first time that ceramic bearings have appeared on a JLR model.

There are height-adjustable spring platforms with motorsport-style coil springs, with the option of two available ride heights.

Another JLR first is the use of carbon-ceramic brakes, with 400mm front discs and 396mm discs at the rear. The car runs on Michelin Pilot Sport Cup 2 tyres. The wheels measure 9.5x20in at the front and 11x20in at the rear.

The Project 8 will be available in two forms: the ‘normal’ four-seat model and a two-seat Track Pack version. The ‘normal’ one, which features an entirely reworked rear bench, includes front performance seats. The Track Pack edition, meanwhile, gets carbonfibre racing seats with four-point harnesses. 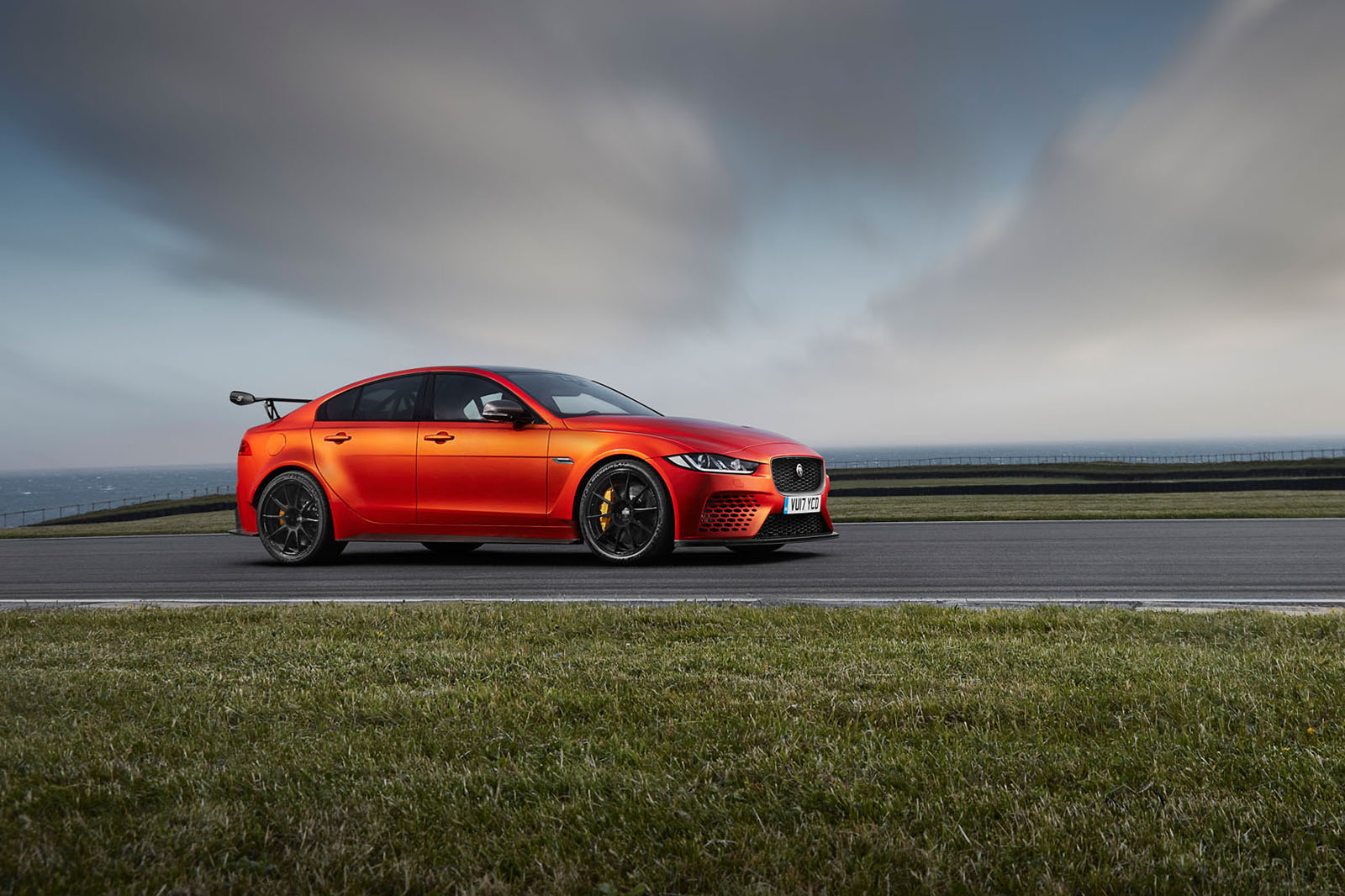 The Track Pack version is 12.2kg lighter and also includes a ‘harness retention hoop’ (in essence, a half rollcage) and a fire extinguisher system.

Both versions of the car come with an Alcantara-clad instrument panel to reduce windscreen reflections. The same material is also used on the door panels and steering wheel. There is a 12.3in TFT instrument panel as part of the infotainment system, which includes a stopwatch and g-meter readout for use in conjunction with Track mode.

Just 300 cars will be built and all will be left-hand drive, which, SVO says, is a necessity due to the complex packaging and cooling of the reworked engine. JLR has yet to say how many models will be available in each market. The limited run is due to production capacity at SVO’s Ryton factory and also to safeguard the future resale value of the car for customers.

Not sure why all this senseless grumbles over a SVO designed car. There's no point in comparing it with other cars - that is entirely subjective, and everybody's opinion will be different.

Jaguar have not conformed to the stereotypical German Merc/BMW model of fill all possible categories - I can't see a small car or a hatchback in their line up? SVO's remit has always been to push the boundaries, and this is not different - the Project 7 was the same. Any other manufacturer will be at liberty to make any other car they like - provided that there is a positive return on investment underpinned by a market demand. I'm sure there will be other derivatives of the XE, and it wouldn't surprise me if many of the technical innovations found in the Project 8 find there way into more 'mainstream' high performance XE's.

Spend your engineering time on finding environmental solutions; not idiotic stuff like this. iPace on one hand, this on other. Jaguar is one hell of a confused caf.
TStag 29 June 2017

Spend your engineering time on finding environmental solutions; not idiotic stuff like this. iPace on one hand, this on other. Jaguar is one hell of a confused caf.

Huh? Jaguar needs to do both. Why choose?

I know Ferrari have chosen petrol over electric, but maybe they don't have the in house engineering talent that JLR can call upon to do 2 things at once.

I was fortunate enough to

I was fortunate enough to have a high speed passenger ride in a new 911 GT3 at the weekend and that is about £110k. As much as I like Jaguar, I have EVERY confidence the GT3 would leave it for dead! It felt massively complete round the track - hugely powerful and composed - and £150k for this is way too much. Maybe £80/£90k at a push would be a more realistic price for this as a "special". £150k puts it in a totally different ballpark altogether and one it can't possibly compete in.
View all comments (29)