The Peugeot Instinct shooting brake concept, which showcases the French brand’s future autonomous plans, has been revealed to the public at the Geneva motor show today.

Peugeot concept designer Matthias Hossann said that while this model won’t make production, the intention was to create a car “that didn’t look like a UFO” and was genuinely usable as a family vehicle. It has four seats and similar interior space to the 308 hatchback, Hossann added.

The Instinct demonstrates Peugeot’s autonomous intentions for the first time. Last year, product boss Laurent Blanchent told Autocar that it would introduce a greater level of autonomy across its range by 2020, and confirmed that the technology would work in the car maker’s existing platforms. 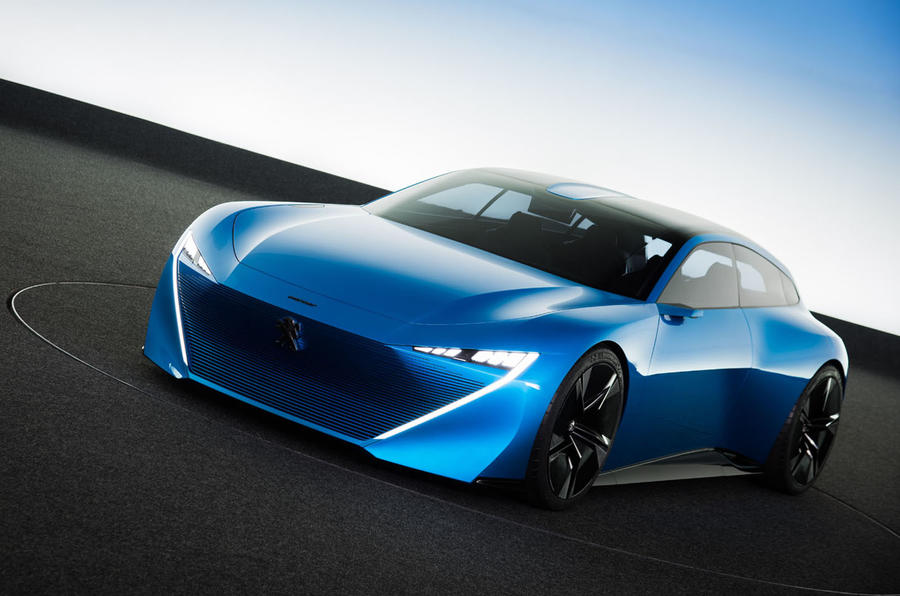 At a reveal event of the Instinct ahead of its Geneva debut, Peugeot strategy boss Aude Brille reinforced this, confirming that autonomous versions of its models would not be built on a separate platform.

The Instinct demonstrates technology related to level five autonomy – the highest level of autonomy on a car – meaning it can equal a human driver in every driving scenario. Brille said she expected to see this technology reach Peugeot cars by 2025, a timescale that is in line with the plans of other major car makers, such as Volkswagen and Mercedes.

With that in mind, the Instinct offers two driving modes for autonomy: 'Soft', which can be selected if you want to read in comfort, and 'Sharp' if you want more of a dynamic journey. Hossann added that, for example, you could download software so that someone such as WRC and touring car legend Sebastién Loeb could virtually drive you to work. There are also two drive modes: 'Relax' and 'Boost', the latter of which would be the most engaging drive behind the wheel.

Showcasing a future generation of Peugeot’s i-Cockpit interior design, the Instinct has a holographic display behind the wheel that shows information such as vehicle speed and battery level, a large screen in the central console and an even larger screen across the front passenger’s dashboard.  As with other recent autonomous car concepts such as the Volkswagen ID, the steering wheel can retract. A so-called i-Device next to the central console screen allows the driver to command the car.

Information displayed on the screens, seat positions, lighting and sounds options change depending on the driving mode chosen.

The Instinct also demonstrates the possibilities of the Internet of Things. Working with Samsung and its so-called Artik Cloud, the cloud connects to devices used every day by the driver and aggregates data. This can come from smart watches, smart phones and social media as well as connecting to devices at home such as a smart television, heating system or fridge. This information can then be collated to help the user. For example, you start the engine of your car and your house doors could automatically lock; your smartwatch knows you are very tired after a gym session, so the vehicle switches to Autonomous Soft mode; your car knows you didn’t do enough exercise yesterday so suggests that you park a little farther from your destination to help you keep fit.

The Instinct uses a 300hp plug-in hybrid powertrain, while Hossann said there was a big focus on efficiency and aerodynamics in the design of the shooting brake. Aerodynamic features including an active spoiler and an active air blade, which is deployed above 56mph to provide extra downforce. There is also an integrated air duct along the length of the Instinct, allowing the air to flow within a narrow tunnel going through both front and rear doors and over the rear wheel arch.

There is also a striking front grille, largely 3D printed, and striking front and rear lights. The front LED lights incorporate a camera into their design that can send information back to the driving assistance systems. This design element is one which, according to Hossann, is most likely to make it to production in the shorter term.

“We would like to integrate this function in the future. We would like something as simple as possible for our radar cameras that can be integrated into the design,” he said.

that will probably never be realized now that a lot of Opel designs needs to be integrated within PSA. Buying Opel may well turn out to be a mistake, particularly since Peugeot has finally found its way again in designing good-looking cars.
DdWorks 1 March 2017

Can I download a drive setting app that offers varying drive modes from mimicking a Pikes Peak racer to the propelling at supersonic speeds? Can I?
mgbv8man 27 February 2017

Peugeot if you make this I will buy one!
View all comments (6)