Volkswagen has released the first official rendering of its eighth-generation Golf GTI ahead of the hot hatchback's unveiling at the Geneva motor show next month.

The new Golf GTI has been unwrapped – see it here

The image shows the model's front end. It looks to bear a strong resemblance to that of its diesel-powered GTD sibling, which is being revealed at the same time.

That model's wide lower grille and distinctive foglight pattern feature, but the addition of air-channeling winglets and a wraparound red pinstripe – a feature of nearly all Golf GTIs since the Mk1 – mark this out as the petrol performance version. 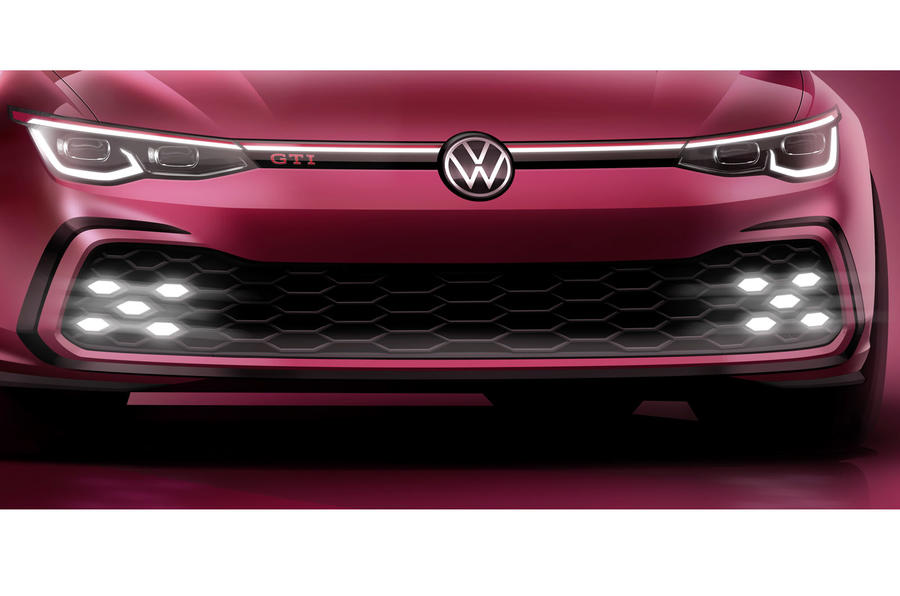 Volkswagen says the GTI will be further marked out from the rest of the Mk8 Golf range with a prominent rear diffuser and twin-exit exhaust system, as seen in photos of the model testing at the Nürburgring. Elsewhere, visual differences can be expected to remain characteristically subtle, likely limited to bespoke wheel options and badging.

In a reversal of original plans, Wolfsburg has decided not to make a more radical switch to hybrid power. Instead, the new Golf GTI is set to stick with much of the hardware that made its predecessor such a success both critically and commercially.

That means an updated version of the Audi-developed 'EA888' turbocharged 2.0-litre petrol engine used in the seventh-generation Golf GTI. Again, like the current car, it will be offered with two power outputs: a standard output of 241bhp and a more powerful 296bhp TCR model that will replace the GTI Performance.

An increase in torque beyond the 258lb ft and 273lb ft of the two versions of the Mk7 GTI is claimed to establish new levels of performance. In the case of the higher-spec model, it's said the 0-62mph time will be less than 6.0sec and the top speed 155mph. Gearbox choices will include carryover versions of today’s six-speed manual and seven-speed dual-clutch automatic units.

Foglights is maybe it's biggest problem

Doesn't kia/hyundai have something similar. Other than that it looks great in an understated way, has a superb 2.0 4 pot Manual that isn't tuned to high heaven, will give you a good 15 years/150k of fun and then turn into a classic.

Best of all it doesn't look like it's been driven though aka Halfords Type R.

Mmmm tacky lights. The people who run these in my local area will love to have these foglights (if that's what they are) on all the time.