BACK TO ALL NEWS
Currently reading: First-gen BAC Mono bows out with celebratory final edition
UP NEXT
Audi: No rear-wheel drive option for RS performance models

British sports car maker BAC has revealed a limited-run commemorative edition of its Mono flagship single-seater, as it prepares to introduce the next-generation model at the Geneva motor show.

Called Mono One, the run-out special marks the end of production for the first-gen Mono, which launched in 2012 as an ultra-lightweight rival to the Ariel Atom and Caterham 620R.

BAC calls the Mono One “a true collector’s item” that “brings to an end one of the most remarkable eras in British automotive history. Just three will be produced by the Liverpool-based firm, each painted in one of the company’s three trademark colours: white, black and red.  All three cars, priced at £158,950, feature exposed carbonfibre bodywork, bespoke lightweight wheel designs in a contrasting colour scheme and model-specific badging across the car.

The Mono One retains the standard car’s naturally aspirated 2.5-litre Ford Duratec four-cylinder, which produces 305bhp and 227lb ft – enough to propel the 580kg track car from 0-60mph in 2.8 seconds.

Ian Briggs, co-founder and design director of BAC, said: “We wanted to give Mono the perfect send-off and this car does exactly that – it’s super rare, with only three available, and has endless unique features that make it serious proposition for collectors.”

The company has yet to offer any clues as to what we can expect from the next iteration of the Mono. It’s likely to make power and performance gains over the current car, and could take elements from the hardcore Mono R range-topper revealed last year.

In April last year, BAC delivered the 100th Mono – painted in a unique commemorative livery – to a Danish car museum. Since the start of the car’s production run, the company has averaged an output of three cars per month.

Carbon Lighter: under the skin of the BAC Mono R​ 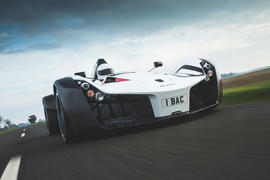