The Range Rover Velar will soon be unveiled as the most radical-looking Range Rover in history: a mid-sized SUV-coupé designed to lay down the toughest challenge yet to Porsche’s all-conquering Porsche Macan and rivals such as the BMW X6 and Mercedes-Benz GLE Coupé.

The new model, which imaginatively revives the Velar name used on original secret Range Rover prototypes in the late 1960s, is designed to plug the price gap between the £40,000 Evoque and the £80,000 Range Rover Sport.

The Range Rover Velar has been revealed. Click here to view it.

Due for official launch at the Geneva motor show in three weeks’ time, the Velar (whose name means ‘veil’ or ‘cover’ in Italian) will be built alongside the Range Rover Sport and Jaguar F-Pace in the ultra-modern aluminium body and assembly plant in Solihull, West Midlands. JLR insiders are confident that rising demand will drive Land Rover vehicle production to new record levels.

Initially dubbed ‘Evoque XL’, the new five-seater is understood to be most closely related under the skin to the Jaguar F-Pace, with which it shares JLR’s IQ platform. It will be powered by a range of north-south engines rather than the transverse units used in the Halewood-manufactured Evoque. The F-Pace relationship suggests that the Velar will be a little longer (and probably roomier) than the Macan. Every version of the new model will be four-wheel drive. 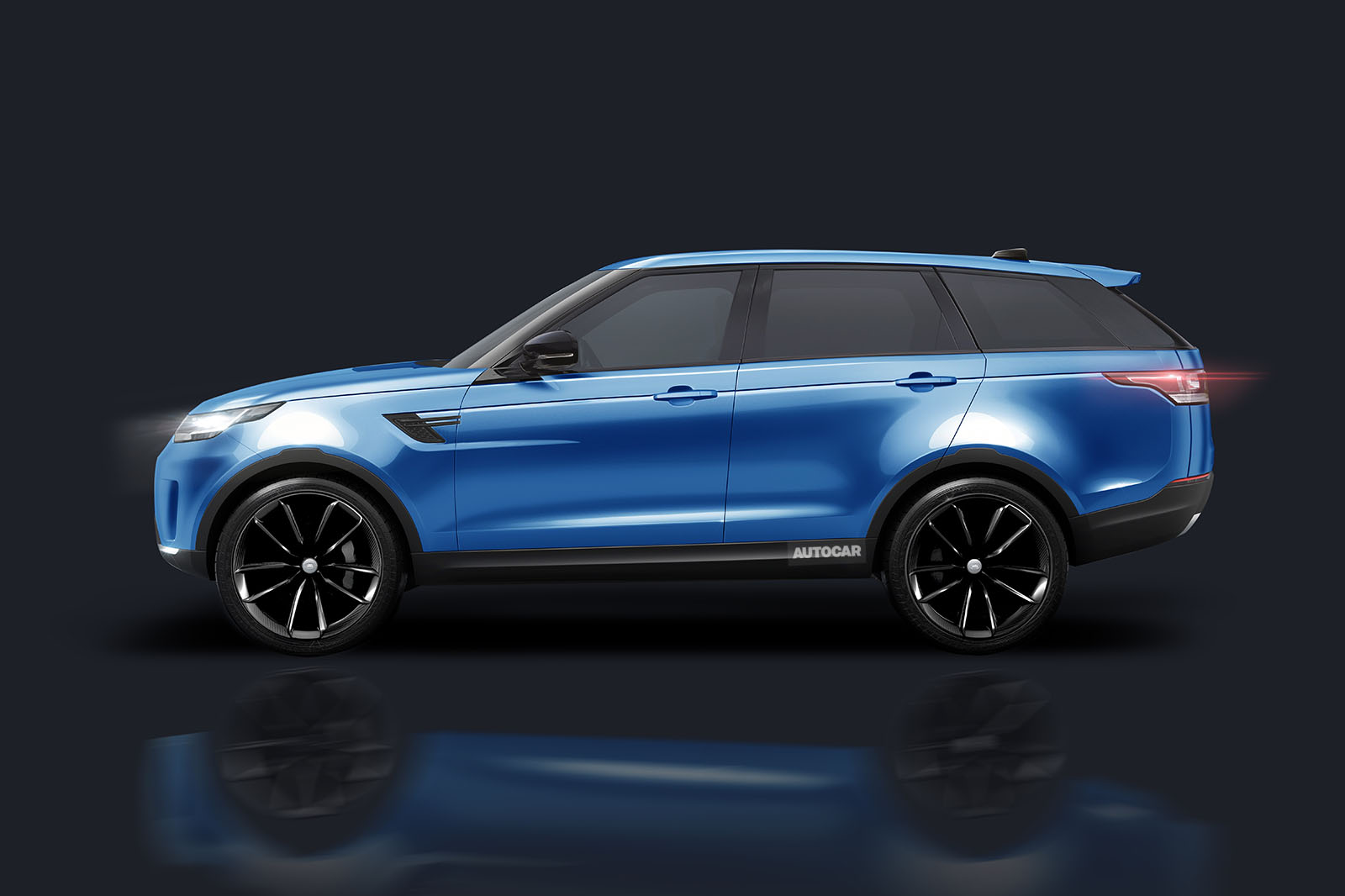 The Velar’s generous ground clearance and short front and rear overhangs suggest it will be a capable performer off road. But like the F-Pace, it won’t have the separate low-range gear set featured on more expensive, more specialist Land Rovers and Range Rovers. Despite that, the car will be positioned at the centre of the ‘lifestyle vehicle’ market, with a greater focus on urban use than off-road performance.

Given the runaway success of the Evoque, which has been instrumental in growing Land Rover’s global sales from 348,388 units in 2013 to 427,122 last year, the company expects demand from customers moving up the range from the Evoque to swell total volume well beyond 500,000 units a year.

One major point of difference between the Velar and its German rivals is likely to be the interior. Land Rover design boss Gerry McGovern’s team has a track record of designing increasingly high-quality cabins, while simplifying the control and switch layouts, whereas Porsche has a more comprehensive, aircraft-like approach.

The Velar’s interior will progress further in areas where McGovern believes his cars already have an edge. The Velar will be powered by JLR’s extensive array of four-cylinder and six-cylinder engines, both diesel and petrol. The four-pot units will be from the established Ingenium range, built at JLR’s recently expanded Wolverhampton engine production facility, about 30 miles north-west of Solihull.

JLR will launch the Velar with the Ford-sourced V6s currently used throughout its range but will replace them during the model’s life with own-design Ingenium in-line six-cylinder petrol and diesel units. These 3.0-litre engines are modular versions of the 2.0-litre four-cylinder Ingenium units with two extra cylinders.

Although it is possible the Velar could use the electric powertrain JLR is developing for its upcoming Jaguar I-Pace SUV, it is more likely to feature a hybrid version. Offering a hybrid, especially a plug-in, would cater for buyers who live in the megacities of Europe, Asia and the US, which are getting ever closer to specifying zeroemissions vehicles for their most congested areas.

JLR already has a hybrid powertrain in the range, used in the 340bhp 3.0 SDV6 HEV Range Rover Sport, but the Velar is more likely to use a newly developed plug-in system based on the 295bhp four-cylinder Ingenium petrol engine. The company is also building its own hybrid electric motor, called the Electric Drive Module, expected to offer a real-world range of between 20 and 30 miles on battery power and to develop 201bhp and 332lb ft of torque, outputs well above those of the 113bhp electric motor used in the BMW X5 xDrive40e.

A range-topping highperformance variant could offer outstanding pace, particularly if Land Rover chooses to install its most powerful 542bhp supercharged 5.0-litre V8 engine in the Velar. The aluminium-bodied vehicle could weigh as little as 1800kg. If that target is achieved, it would give the Velar a significant advantage over the BMW X6 and Mercedes GLE Coupé. A V8- equipped Velar could be priced at around £90,000.

The same V8 engine is also earmarked for a planned F-Pace SVR, under development at JLR’s Special Vehicle Operations division at Oxford Road, near Coventry.

The new Velar reinforces the ‘Luxury’ pillar of Land Rover’s three-pronged vehicle strategy, along with the other models wearing Range Rover badges. It stands alongside a ‘Leisure’ pillar that includes the Discovery and Discovery Sport and a ‘Dual-purpose’ pillar that will remain dormant until the much-anticipated new Land Rover Defender arrives in 2019.

With the advent of the Velar, there will be four models in the Luxury pillar, two in Leisure and none in Dualpurpose — which rather lays bare JLR bosses’ view that fulfilling the market’s thirst for plush, upmarket SUVs and crossovers is the priority, before the company turns its attention to more utilitarian vehicles such as the Defender.

The Land Rover Spain dealer conference was held last week (Jan 30th). They showed interior and exterior pictures of the Velar, which, contrary to what is being reported does NOT sit between the Range Rover Sport and the Evoque, but between the Range Rover and the Sport, both in terms of size and price. In Spain it will start at 90,000 € (20,000 € more than the Sport and 20,000 € less than the Range Rover)
The car will compete with the BMW X6 and Mercedes GLE Coupe, and was presented as the most road biased Range Rover ever. The interior is reminiscent of the Jaguar e-pace and everything is touch screen, even the buttons at the steering wheel. In the presentation, they said that the car F-Pace car that has fooled the press so far was a diversion built for that purpose. They also talked about the baby Evoque, which will slot beneath the evoque at the bottom of the range rover line up. The car will be available from June.
supermanuel 4 February 2017

It would help significantly with differentiation of this model from the others in the LR/RR range (and as a USP in the 'class') if this new coupe version had 3 doors instead of 5. You know, like the original Range Rover and the baby Evoque. I doubt they'd have the nerve to go 3 door when all the competitors are stupid 5 door 'coupes' though.
5wheels 3 February 2017

First to place the Macan and this ugly duckling design conscious heap in the same category beats me. Then t include the ugliest of all the X6 and the mimicking AMG in the same region of equality baffles me. I think Autocar are loosing their mojo all round these days. It will sell (this JLR Velar - daft name) to those 95% women buyers of the Evoque who will find it makes them even more sexy in their eyes. Where's Doddy's tickling stick?? should give one free with each sale and tell the ladies where to put it
View all comments (25)