From £44,8308
The Range Rover Velar is the most road-biased car Land Rover has made. So does it still feel like a proper part of the family?
Open gallery
Close

What is that nagging feeling about the Range Rover Velar? That little suspicion that not everything is quite as clear cut as it should be? 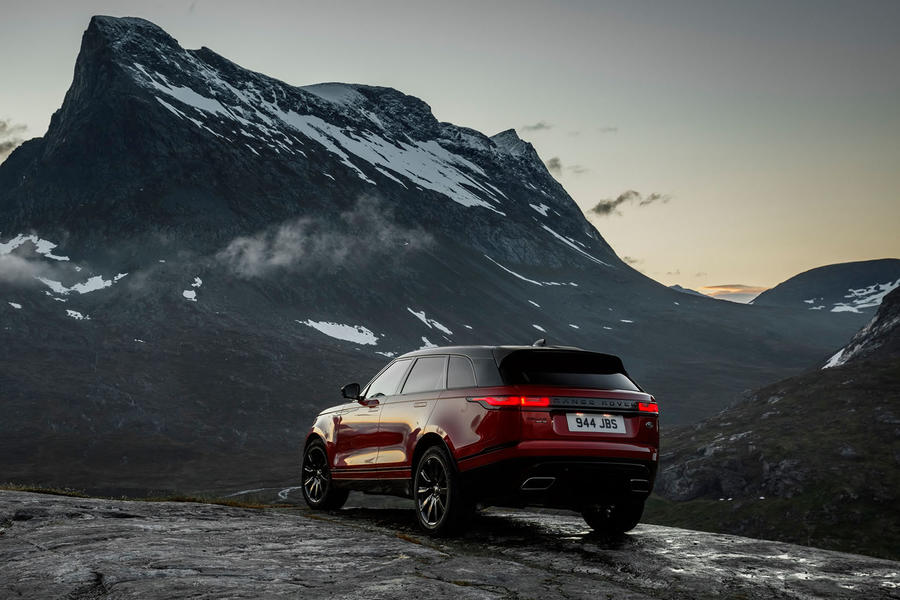 The Velar, then, ends up with an 81%-aluminium body, with some steel under the boot floor, where it doesn’t hurt that it brings the weight distribution rearwards (albeit there’s a composite tailgate to maintain a low centre of gravity), and some magnesium under the bonnet to, conversely, lighten the front end. Consequently, the claimed kerb weight for all versions, barring the biggest diesel, is less than 1900kg.

In the same way that the Jaguar models on this platform have double wishbones at the front and an integral link set-up at the back – which is like multi-link but with additional, lateral-rigidity-increasing components – so too does the Velar. Think of the Velar as a semi-skimmed Range Rover, then, to the Sport’s full fat and the RR’s gold top. (The Evoque is… what? Kinda non-dairy?)

If you want it less figuratively, compared with the Sport, the Velar’s towing limit is 2500kg, not 3500kg, and it doesn’t get a low-ratio transfer case. Of its six engine options, four are 2.0 four-cylinder units, the other two V6s; and the four-pots, as standard, get coil springs. Air springing, which Land Rover uses to great effect to increase off-road capability on big models, is standard on V6s and optional on the fours. Some of those things will inhibit the Velar off-road – we’ll come to that – but that might not matter because Land Rover says this is the most dynamically focused Range Rover yet. We’ll come to that too. 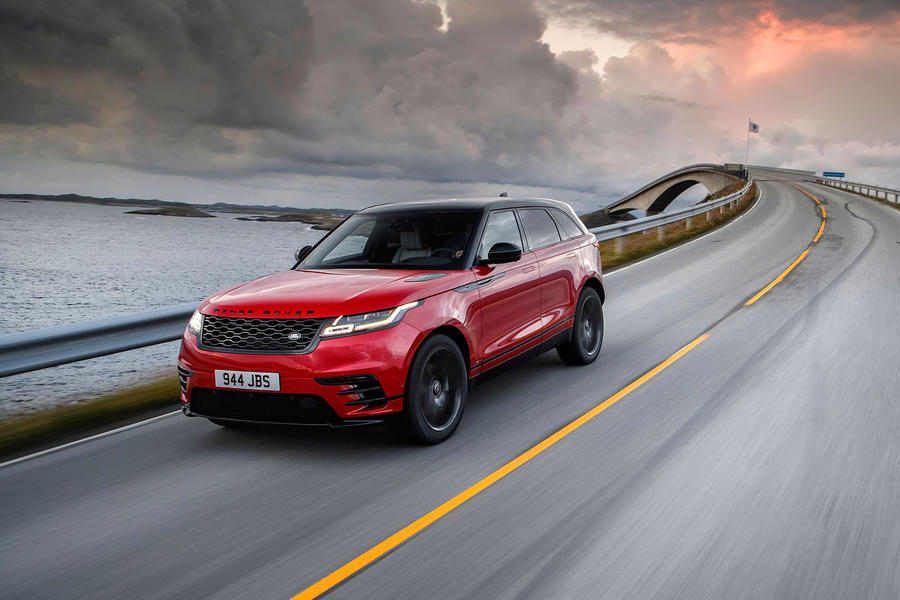 But first, inside. Where, because it’s a Range Rover, there is a big, lateral slab across the dashboard; a leather-bound butcher’s block that has been a feature item on Range Rovers ever since Rover met BMW. Now, as then, it’s meant to feel yacht-inspired; broad and powerful, but light and luxurious, a structural horizontal beam with vertical supports running through it. It’s the feature that really established a Range Rover’s interior as one to send postcards home about; one, surely, benchmarked by, among others, Volvo when creating the new XC90.

But there are two things about the addenda surrounding it this time. First is the Velar’s perceived material quality. On the face of it, things are great: the leather is good – Jaguar Land Rover (JLR) talks about using the same high-end stitching and fabrics as top models – but it flatters to deceive in places. Not everything can be leather, and on lower bits of the cabin, there are harder plastics, some scratchy, which seatbelt buckles have already given a hard time. Some of the metalised plastics don’t convince you well enough that they’re not plastics, aside from providing an authentic, overly harsh glare in bright sunlight. Compared with, say, a Porsche Macan, the Velar is visually a lot more arresting. But while dark, rubbery plastics are boring, they’re not blinding, either.

I’m probably nitpicking, mind. But it strikes me that Volvo does it better. And the XC90, in terms of airiness and finish, is probably the Velar’s closest benchmark. It’s also a car that, like the Velar, has a predominantly touchscreen infotainment system.

But here’s point two of note about the Velar: this thing now has a proper one. There is a fully digital instrument panel, with two, large, hi-res touchscreen panels on the dash. Even the steering-wheel buttons are digitally highlighted. And all of it is good. For the first time, I think JLR can turn around and say it has caught up with everybody else. Except? Well, except the lower panel is by your knee. It deals with systems you’ll use less frequently but, honestly, that’s too far away from where you should be looking.

The rest of the interior? Well, it mimics, in its way, the F-Pace, in that it offers a large boot, at the expense of some rear leg room. And there’s nothing wrong with that. There’s loads of room in the front: the seats are big, there are slidey armrests, that sort of thing. I wouldn’t mind if the steering wheel reached a bit closer to me, but it is a good wheel. And there’s enough room in the back. I’m 5ft 10in and could sit behind my own driving position quite comfortably. Besides which, you get quite a lot more boot space this way (673 litres versus a Macan’s 500, if you’re interested). However, as standard, I don’t like the idea of a Range Rover, even a less than full-fat one, having a spacesaving rather than full-sized spare. This is an off-roader, after all.

All models – 178bhp diesel, 237bhp diesel and 296bhp V6 diesel (tested here), plus 247bhp petrol, 296bhp petrol and 376bhp V6 petrol – drive through an eight-speed automatic gearbox. There are two versions of that, depending on the torque they have to cope with. All models are all-wheel drive, too, but not in the traditional permanent Land Rover sense (nor even the newer Evoque sense). Instead, because the Velar comes from the same fundamentally rear-driven platform as Jaguars, it’s normally a rear-biased car, with a chain drive to transfer torque to the front when it needs it.

There’s Land Rover’s Terrain Response system and you can raise the air suspension, but you can’t lock a centre differential, you can’t choose 50/50 power split, and although the electronics might do those for you, it’s their will, not yours. There is, too, the option of a limited slip rear differential, likely to make it feel keener on the road and give better traction off it. When it does come to off-road ability, it’s probably whether the Velar’s 2500kg towing limit is up to Pony Club towing that’s more relevant than the 213mm (coil springs) or 251mm (air springs) ground clearance, or the 24deg approach, 27deg departure and 20deg breakover angles. Or the 600mm (coil) or 650mm (air) wade depth. Despite no low-ratio ’box, mind, ultimately what limits the Velar off road is what usually limits an off-roader: tyre choice and ground clearances.

Plus you might not like to damage the aluminium body. Maybe you thought I wasn’t going to mention it. I don’t always, what with beauty being so subjective. But you can’t not, can you? The Velar looks like the very personification of a concept car, to me. The real thing. Like it just stepped out of a salon. And the finish feels every inch the £70k Range Rover. What an astonishingly good-looking car.

Anyway, as well as being too pretty to damage, the Velar is, I’m told, also the most road-focused Land Rover product yet. So although it’s worth knowing if it’ll get you to your shoot (it will), what’s important is how it goes down the road.

There’s a notable sense of relief when a JLR engineer asks you whether it feels like a Range Rover, and you say “yes”, because I suppose there was a concern it’d feel too much like a Jaguar. It doesn’t.

Now, a couple of caveats. I’ve only tried the two V6s, petrol and diesel, and they both get air springing, which is unavailable on an F-Pace. So maybe a four-pot on coil springs will be more Jag-ish, but there’s plenty of evidence to think not.

The idea, despite the suggestion that this is a dynamically adept car for a Land Rover badge, is that it has a level of refinement that nothing with a Leaper on the front will match. I think they’ve done that. Ditto nothing with a Porsche badge matches it; nor with an Audi one. At least, not in Q5 terms, although the Velar’s price is such that you might consider a Q7. And an XC90’s lack of engine refinement removes itself from this conversation too.

But, no, it’s the Velar’s refinement, rather than its agility, that is the more prevalent. The steering is light and easy, and the ride, once you’re up to any kind of speed, nudges lumps and bumps aside comfortably. 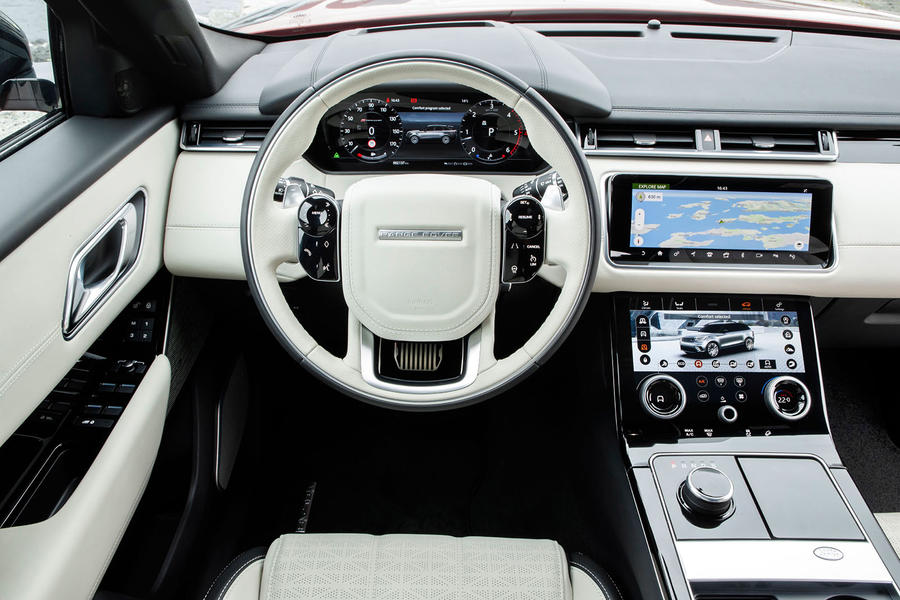 At low speeds, things aren’t quite so clever, as a result of the 21in (or 22in on the petrol model I tried) wheels that suit the Velar’s looks so well. What, when you’re moving, is a barely audible thump turns into a proper whack. There’s some body movement to go with the isolation, inevitably, but that suits what feels like, to me, a car of decent hush.

Another caveat: the roads we tested it on, spectacular though they make these pictures, offer you no more than 50mph. And some are abrasive, so there’s some road noise, to the extent that a test in the UK will be essential before a definitive verdict is reached.

But the engine is merely a distant thrum. The gearshift changes smoothly. And Land Rover’s people say that they have put a lot of effort, plus materials and costs, into creating a space that’s more isolated than any of the cars whose basis the Velar shares.

I think that’s important. Look, it’s easy to get a bit tied down in platforms and architectures and whatnot, and it can be quite silly, really: after all, what is any car if not a collection of metals and plastics to a given size? Everyone hangs things from common systems.

But it’s important that an SUV with a price of up to £85,000 feels in no way related to a compact executive saloon that starts at £27,000. And it doesn’t. At least, in no way does the Velar feel like any other JLR model any more than a Macan or an XC90 feels like another car from their respective ranges or groups. It feels like a Range Rover. Looks like one. Sounds like and is as refined as one.

Given all that, why, then, the little nagging doubt? The four-star rating that feels solid, but not outstanding. Days after driving it, I’m still not sure; for which, reader, I apologise. Perhaps it’s the 50mph roads. Perhaps it’s some of those interior touches, which make the Velar feel less complete than its design suggests inside.

Yet these are trims and prices to where loads of buyers will flock. I guess they’re paying for less tangible things; and I guess you can’t blame Land Rover for letting them. 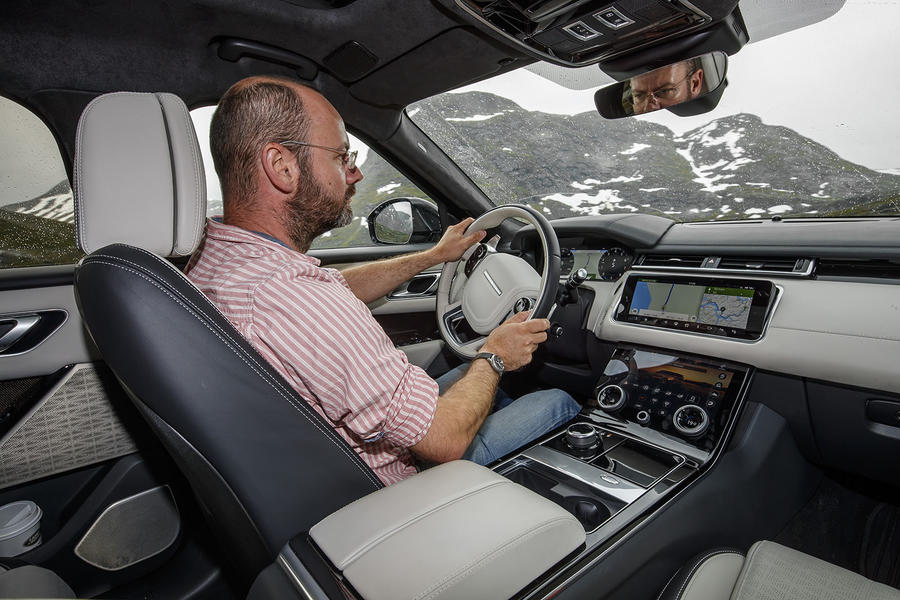 The idea of this car has really grown on me. It's great looking, and I especially like the interior. I just wonder how blurred the distinction is getting between the Jaguar and Land Rover brands. Aren't they now competing with each other in certain areas, rather than complementing each other? As with most new Land Rover products, there's a big question mark over the price, but I suppose they know what they can sell it for.

Previously thought of having i-pace as my second car but this thing is stunning. Will be swapping my Evoque to this .

This will sell very well, but at the expense of the RRS and RR

Why is the velar compared to the F-Pace, because I don't think they belong to the same category, neither does it compete with the XC90 or the Porche Macan, in fact the Macan and the XC90 are not in the same class. Yikes! If the car experts cannot get it right what chance do we stand?