BACK TO ALL NEWS
Currently reading: 2016 Mercedes-AMG C63 Cabriolet spied testing
UP NEXT
Lotus confirms new sports car, end of Elise, Exige and Evora in 2021

The 2016 Mercedes-AMG C63 Cabriolet has been spotted testing ahead of its planned launch at the Geneva motor show next month.

The convertible is the final model in the C-Class range to be launched with a performance version and is set to get the same 4.0-litre V8 petrol engine as the C63 Coupé and saloon.

The spy shots show that it will receive the same front bumper and wider wheel arches as the Coupé, along with dual exhausts at the rear. It is also clear from the spy shots that it will come with the same folding cloth roof as the standard C-Class Cabriolet, which is also set to make its debut in Geneva.

Revealed: The Mercedes-Benz C-Class Cabriolet is unveiled at the Geneva Motorshow

If the Cabriolet is offered in the same standard and S variantsa s the Coupé, as expected, then the C63 Cabriolet will produce up to 503bhp and 516lb ft - boosts of 23bhp and 74lb ft over the 6.2-litre V8 of the previous version - in its most powerful form.

This should result in a 0-62mph time around the four-second mark and an expected limited top speed of 155mph.

Inside, it is expected to come with AMG-specific instruments, controls, gear lever and trim applications, along with a flat-bottomed multi-function steering wheel and sports seats. It is also likely to come with the same seven-speed Speedshift MCT automatic gearbox as the other C63 models.

While there is no official word on when the C63 Cabriolet will be launched, it is expected to go on sale towards the end of this year. 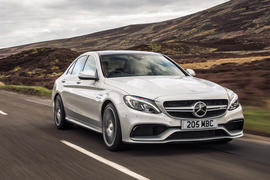