BACK TO ALL NEWS
Currently reading: 200mph Ginetta Akula supercar revealed
UP NEXT
Analysis: Polestar lifts the lid on lifetime EV emissions

Ginetta, the Leeds-based sports and racing car manufacturer, is launching a shock new 200mph Ferrari-priced supercar in the most spectacular way it can think of – by unveiling a fully finished, ready-to-drive version at Geneva’s Palexpo, scene of the world’s most popular motor show.

Car makers routinely leak news and images before they have much to show, to build anticipation. But Ginetta has ignored the window dressing and built its new Akula supercar to completion in total secrecy, depending on impressive technical capability developed over a decade, and sustained by the sense of destiny of its owner Lawrence Tomlinson, former Le Mans class winner and incorrigible lover of fast cars.

The £340,000 Akula is a low, aggressively styled but essentially practical front/mid-engined coupé. It has a bespoke, all-carbonfibre tub chassis built alongside the company’s race cars and clad with carbonfibre body panels. It is shaped for an aerodynamic performance normally not possible in road cars and powered by an extremely light and compact Ginetta-designed 90deg V8 engine of just over 6.0 litres, producing around 600bhp and 520lb ft of torque. The gearbox is a unique Ginetta-developed creation, a six-speed sequential paddle-shift unit with the diff connected to the engine (and multi-plate clutch) by a short carbonfibre tailshaft.

The engine, dry sumped and fuelled by Ginetta’s own throttle bodies, has its block milled entirely from billet aluminium for extreme lightness and strength. The very compact unit is normally aspirated for instant throttle response. Ginetta’s codename for it was BB6 (the ‘6’ standing for 600bhp) and Tomlinson admits he’s already considered a BB10. With the engine in place, the car weighs just 1150kg, undercutting mid-engined rivals by at least 150kg and the heaviest by 350kg. 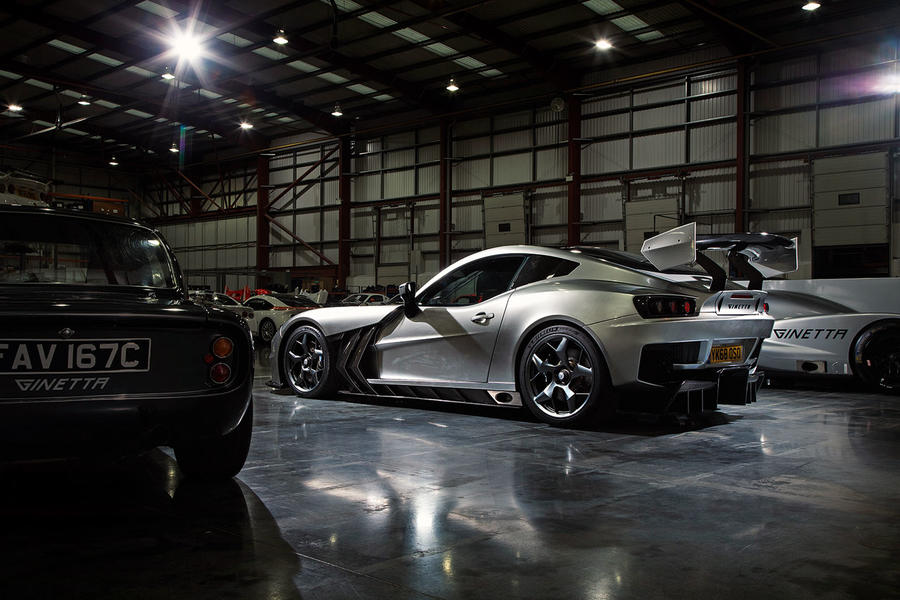 Tomlinson cheerfully admits his supercar project is completely new territory for the company he bought 13 years ago as something of a sports car underachiever (after failing to buy TVR) and has built it up into a race-minded technology powerhouse. An engineer by training, and one who designs and develops his own car, Tomlinson has already driven the new supercar in anger at Blyton Park, a test and sprint track he owns, and will start on the fine-tuning as soon as he gets back from Geneva.

“Why have we done it? Because we can, I guess,” Tomlinson explains when I ask the most obvious question. “We’ve made decent progress on other fronts. We’re racing Toyota in LMP1, we built the first LMP3 car with the blessing of the Le Mans organisers, our GT4 car is very successful globally and we’ve been running the world’s most successful junior racing series for many years. We have all the design and technical capability a project like this needs, we’re a proud British operation, and we need to show it off.”

Despite the secrecy, Tomlinson discreetly contacted the circle of enthusiasts he knows and came up with a handful of orders from serial Ferrari-Lamborghini-McLaren buyers who know a good driver’s car when they see one. This has since expanded to 14 as word has discreetly spread, accounting for 60% of the 20 units to be made in its first production year (2020). Ginetta aims to preserve exclusivity with an annual output of just 30 to 50 cars thereafter.

Tomlinson is much encouraged by the early reaction: “Our job is to make a driver’s car so desirable that an owner with six great machines in the garage will walk past the other five to get into ours.”

The new supercar is bigger than any previous Ginetta road car, a shade longer than the latest Porsche GT3 at 4640mm, about 100mm wider and nearly 200mm longer in the wheelbase. Although officially described as front/mid-engined, the car is closer than most rear/mid-engined rivals to having its engine in the true centre of the car (the tiny V8 is so far back that its drive pulleys sit directly beneath the windscreen wipers) and the 49% front, 51% rear weight distribution proves the fact.

This layout leaves sufficient space to house a carbonfibre front structure that both provides FIA GT3 levels of crash protection and light but rigid mounting for the double-wishbone front suspension, whose coil-over units are anchored in the centre of the car and connected by pushrods. A similar system is used at the rear (pushrod-operated double wishbones mounted on a carbonfibre subframe) but there’s also space for a remarkably large boot, well able to house two sets of golf clubs. The Michelin Pilot Sport 4 tyres are substantial without being outrageous: 275/35 ZR19s in front and 305/30 ZR20s behind, and all running on own-design centre-lock Ginetta alloy wheels. Brakes are Alcon carbon discs. 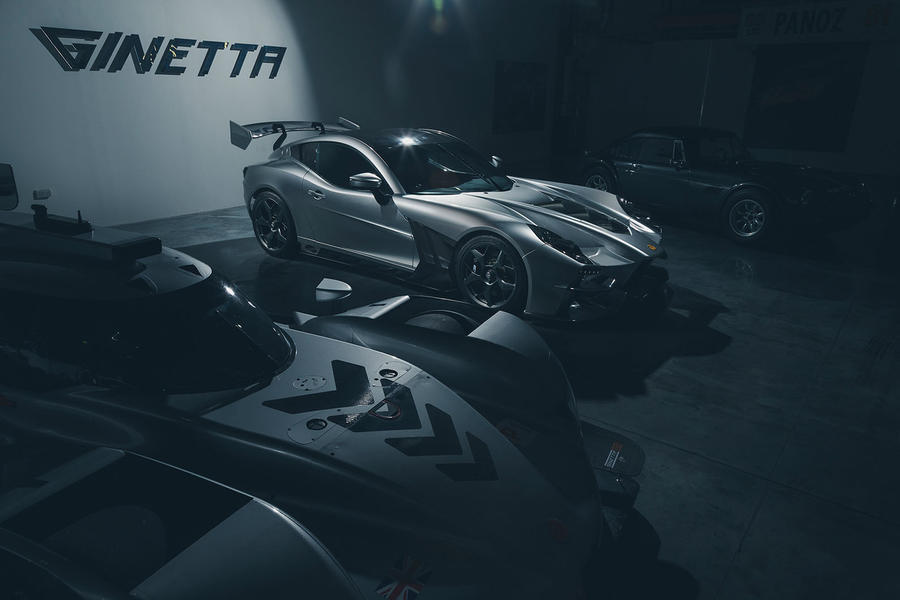 Tomlinson won Le Mans GT2 class in a front/mid-engined Panoz (and now owns the winning car) but demurs at suggestions that sentiment might have played a part in the layout of his new supercar. It’s just the right way of doing things, he insists. Having the engine so far back allows an optimised aero package. It also allows the front wishbones to be long, unimpeded by an engine, which in turn helps keep the tyres flat on the road as the ride height changes when aero loads build at speed.

For a road car, the new Ginetta promises a phenomenal aerodynamic performance. The company has already spent many hours in the Williams wind tunnel developing aerodynamics whose efficiency is clearly all-important in styling that bristles with planes and ducts and aerofoils, plus a high rear deck dominated by a huge wing (with the same aerofoil shape as the Ginetta LMP1 car) and an underbody diffuser that would do justice to many an pure racer. A pair of business-like slash-cut exhausts prevent pipework interrupting underbody airflow.

The same goes for the downforce, which amounts to an extraordinary 376kg at 100mph, well ahead of cars in the LaFerrari and McLaren P1 bracket, and within 5% of Ginetta’s own current LMP3 car.

Tomlinson is anxious that none of this talk of lightness and extreme aero should obscure the fact that this is very much a practical road car. The “sensible” doors are sized for easy ingress/egress, and he’s passionate about their panel fit. The boot can wallow 675 litres of luggage, all sight lines are designed for easy visibility in traffic and the car will come with niceties such as automatic headlights, a reversing camera, an electronic parking brake, parking sensors, sat-nav, ABS and traction control, climate control, heated screens and full connectivity. Door handles and inside switchgear will be milled from billet aluminium. Ginetta’s comprehensive warranty means the company will take charge of the cars for their first two years “virtually anywhere in the world”.

Owners will be able to configure their cars in almost any colour and trim combination and every owner will get a race-style car fitting: the seats are moulded into the tub for lightness, so the steering column and pedal box move to suit individual drivers, with seat shapes alterable by inserts or bespoke padding. Tomlinson wants Ginetta ownership to be a highly personal experience and believes the numbers of cars made will be important for its exclusivity. He’s serious about knowing owners as individuals.

Production will begin late this year and first deliveries are scheduled for January 2020. Anyone joining Tomlinson’s supercar club now won’t get a car until well into next year, but the group will always be exclusive. For a company that currently makes around 300 cars a year, mostly racers, 50 a year is plenty. “We’re not mass producers,” he says, “and we want this car to be a very good investment.”

27 February 2019
Is it that hard to build it fast and also have it look good?
Design looks like someone rear ended a Panoz, and then bolted some Vette ZR1 parts to the car afterwards.
More Fast and Furious than race pedigree, which is a shame as Ginettas in the past had some nice proportions.

The Front is Alright

But what happened at the back?  As mentioned above, it looks like it's been shunted up the duff.

Is this the previously teased "Aston Martin competitor"?

And then someone bolted on a random curvy back which does not suit at all and completly messes up the car altogether as if someone had got all scared after doing the front and said "whoa, lets tone it down a bit at the back for no obviosly apparent reason"

Did a Corvette ZR1 crash into

27 February 2019
Did a Corvette ZR1 crash into a Panoz Esperante that happened to be parked in the Ginetta factory?

I wish them well and their target sales figures should be achievable, but that rear wing... OTT and juvenile on a road car. All that time in the Williams wind tunnel should have been aimed at developing a more discrete aerodynamic solution.

Should be used to design a decent GP car, for their current rather embarrassing F1 outfit!

The shape, in profile, looks

The shape, in profile, looks great, a nice swoop into muscular rear haunches, not sure of some of the aero detailing front and rear and not keen on the huge rear spoiler, clearer pics will help as these are quite dark. Good luck to them, I hope it's a success.

Photos don’t do it any favours, come to that most Cars look odd, there proportions are hard to judge, and yes, from the photos it does look a bit Corvette, the Glass n Carbon Roof make it look top heavy, but it’s so light and with lots of power and torque that it will embarrass at lot of the glitterati in Supercar Land, I wish them well.....

Hope they make a profit out

Hope they make a profit out of it. Front actually looks great. And unique.

I'll not comment on the back. Enough has been said

The previous itineration of TVR foundered on the back of trying to build its own engines. Having failed to buy the company, you might have thought this would be lesson learnt. Can't fault the ambition though.