BACK TO ALL NEWS
Currently reading: Hot Mercedes-AMG GLB SUV set for Frankfurt reveal
UP NEXT
Hyundai Ioniq 5 vs Skoda Enyaq: the best family EV for £40,000?

The first high-performance Mercedes-AMG version of the recently launched GLB compact SUV will be revealed at this year's Frankfurt motor show.

The Affalterbach firm is developing two four-wheel-drive versions of the GLB, in both 35 4Matic and 45 4Matic trim. The 35 version, which will feature the same 302bhp 2.0-litre mild hybrid petrol engine found in the A35 hot hatch, is set to be revealed at Frankfurt, with sales starting later this year.

The Mercedes-AMG GLB has previously been spied undergoing development work in both variants. It is differentiated from standard versions by its reduced ride height, larger brake discs, multi-pot calipers and four tailpipes, as opposed to the twin-exit arrangement of the less powerful GLB 35 4Matic prototypes we’ve seen previously.

The GLB 45, due on sale next year to rival the Audi RS Q3, is among a number of new Mercedes-AMG models set to run a newly developed four-cylinder engine based on Mercedes’ turbocharged 2.0-litre 'M260' unit.

Also due to appear in the A45 4Matic, CLA 45, CLA 45 Shooting Brake and GLA 45, the new powerplant is claimed to develop 382bhp in standard guise and 416bhp in a higher state of tune. 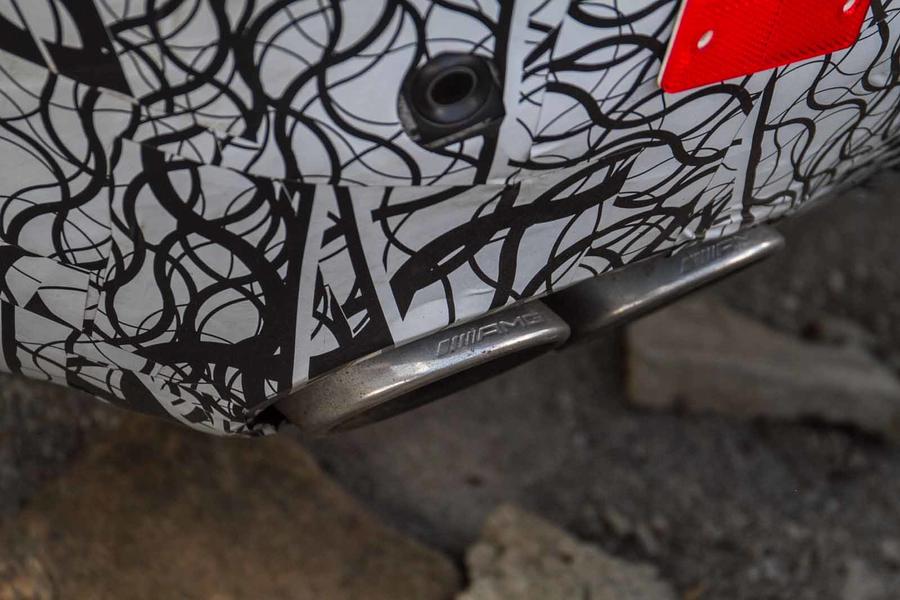 In the GLB 45, the new engine will be mated to an eight-speed dual-clutch automatic gearbox and a new four-wheel drive system developed in a partnership between AMG and Austrian engineering specialist Magna Powertrain. It uses electrohydraulic actuation instead of the electromechanical operation of the four-wheel drive system by transverse engine models built by AMG up to now.

Among the developments incorporated on the new four-wheel drive system is a rear differential featuring two separate clutches. They allow it to apportion up to 100% of power to each of the individual rear wheels in a so-called drift mode that AMG sources have revealed to Autocar will feature on all upcoming 45-badged models.

The GLB 45 is set to crown the upcoming GLB line-up when it goes on sale in 2020. It will be positioned above the GLB 35, which runs a milder 302bhp turbocharged 2.0-litre four-cylinder petrol engine and is set to form part of the initial GLB line-up that's planned to be launched in early June.

The GLB is the eighth member of Mercedes’ compact car line-up. In standard guise, it offers the choice of either five or seven seats.

I love fast cars.  I still

I love fast cars.  I still drive an aging AMG, with a proper AMG engine.  But this?  Honestly, I am more interested in coin collecting.

It is dull, silly, derivative, box-ticking, epically formulaic and totally and utterly un-cool.

AMG, RS and M are all self-destructing their hard earned auras at a tragic rate.

Well the Pista makes sense as

Well the Pista makes sense as a track car that doesn't have to be trailered to the track so I have plenty of sympathy for that.  But I wholeheartedly agree with Boris about yet another hyper SUV that will be squirted in a straight line for maybe 2 seconds every now and then but 99.99% of the time will demonstrate all sorts of ways in which it is worse than the cooking models for commuting, touring, school runs, you name it.  I suppose MB have built a commercial case to justify it i.e. there are enough people out there who want exactly that; beats me.

As Worthy as 90's Sportscars?

Modern performance SUV's are producing more power and better lap times than well considered sports cars of the 1990's. If the those sportscars of the 90's were so loved by us petrolheads, why the animosity towards these SUV's? Surely owning a Ferrari Pista as a road car is no more bizarre than owning this AMG SUV? Neither make sense.