BACK TO ALL NEWS
Currently reading: Facelifted DS4 unveiled at Frankfurt
UP NEXT
New Mercedes-Benz EQA revealed as sub-£40k electric crossover

PSA Peugeot Citroën’s DS brand has given the DS 4 a major makeover. The model gains a freshly styled nose, new headlights with xenon and LED technology, a freshened engine line-up and more paint and trim options.

In addition, DS has created two models out of one. In place of the original single variant, there’s now a choice of two distinct versions: the standard-issue five-door hatchback, which has a normal ride height; and the new Crossback, which rides 30mm higher and has more rugged styling, including larger wheels, cosmetic skidplates and roof bars.

Both versions of the new 4 will be front-wheel drive only and the engine range is made up of three turbocharged petrol engines and three diesel motors. A six-speed manual gearbox and a six-speed torque-converter automatic are the two transmission options.

In the UK, the Crossback will be available with one trim level and a choice of two engines.

Blog: Is DS heading in the right direction?

Eric Apode, vice president for products and business development at DS, said the new 4 line-up is intended to compete with “established premium C-segment cars such as the Audi A3, BMW 1 Series and Volvo V40”.

Apode added that crossovers based on premium C-segment cars were now accounting for 30% of sales, with the traditional hatchbacks dropping from 50 to 40% of sales. This market shift was the inspiration behind the decision to build the Crossback, he said.

As well as getting the new DS family face, more exterior chrome trim and significantly improved headlights, the new 4 gets a new 7.0in colour touchscreen, which allows “two-thirds of the dashboard switches” to be removed.

Options include CarPlay for compatibility with iPhones, mirroring for Apple and Android mobile phones as well as the ‘DS Connect’ system, blind spot warning, keyless entry, a reversing camera, massage seats and an upmarket Denon hi-fi.

The 4 also now has the option of four roof colours and nine body colours, which adds up to 38 different combinations. Nappa leather door panels and semi-aniline leather trim are again optional. Both versions get a ‘wrap-over’ windscreen as standard.

In the UK, the Crossback will be offered with only the Pure Tech 130 engine and manual ’box or the Blue HDi 120 with either the manual or auto. 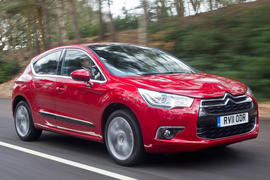 I think the "cleared down comments" is an illusion. There was another separate article upon which everyone commented, and it is that whole article with comments that has been archived.
xxxx 31 August 2015

It's not a three door. Also, if the autocar doesn't mention you have to be a gymnast to get in the rear without being stabbed by the door frame I'll call for an investigation. Still like the ds3, cactus, Picasso though
xxxx 31 August 2015

It's not a three door. Also, if the autocar doesn't mention you have to be a gymnast to get in the rear without being stabbed by the door frame I'll call for an investigation. Still like the ds3, cactus, Picasso though
View all comments (10)