A new range-topping Lexus LS saloon will be launched at the Detroit motor show in January before going on sale in 2018.

It'll then be launched with the option of hydrogen power in 2019, as the firm looks to capitalise on the leadership in fuel cell technology established by the Toyota Mirai of its parent company.

Lexus’s rival to the Audi A8, BMW 7 Series, Jaguar XJ and Mercedes-Benz S-Class will be based heavily on the LF-FC concept car that was unveiled at the Tokyo motor show in 2015. The LS is also expected to be sold with the choice of a V8 hybrid powertrain producing around 535bhp.

Lexus Europe boss Alain Uyttenhoven said: “We know how to make fuel cells and the only challenge is how to package a fuel cell in a car that also needs a certain level of performance.” He did not confirm plans for the LS, however. “Premium buyers have certain expectations. For refinement, fuel cell is ideal, but we must also do some work to demonstrate the right levels of performance.”

The hydrogen-powered LF-FC concept had one electric motor driving the rear wheels, with electricity being sent to two in-wheel electric motors at the front.

Its drive system allowed it to precisely distribute torque to all four wheels, resulting in “exceptional dynamic handling and superior road stability”.

In addition, placing the power control unit at the front and hydrogen storage tanks in a ‘T’ configuration were said to allow for “optimal” weight distribution for a sports saloon.

The new LS - which is expected to go on sale with conventional powertrains in 2018 - is expected to be a technological showpiece for Lexus, with several autonomous driving functions, a new-look interior that includes front and rear touchscreens and features such as a gesture-controlled infotainment system. It will be based on the new Lexus GA-L platform, which will first be used on the new Lexus LC500 and LC500h sports cars.

The spread of hydrogen fuel stations is expected to grow exponentially by 2019, but reports suggest Lexus has still predicted that hydrogen-powered versions of the LS will sell “in hundreds, not thousands” and sales will be targeted in large cities such as London, Los Angeles, Paris and Tokyo, where diesel is expected to be outlawed by 2020. 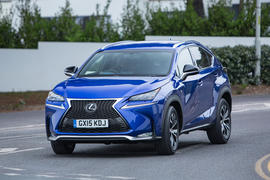 28 November 2016
A face saving exercise in that Toyota have given up on the idea and hope we forget by 2019.
"reports suggest Lexus has still predicted that hydrogen-powered versions of the LS will sell “in hundreds, not thousands” in which case why bother with such a loss leader. Telsa alone are currently knocking out 100,000 EV's, Toyota wake up, smell the coffee and spend the R and D money on EV's.

8 December 2016
Wake up and smell the coffee. Well I've never heard that one before.

Wake up and smell the coffee. Well I've never heard that one before.

Probably because you've got 'your head in the sand'

Planning for the future

9 January 2017
I can't help but feel you're being naive.
Toyota was at the forefront of bringing back (Hybrid) electric vehicles, however before that (since the 1920's), EV was a hard sell. Even Tesla started out modest, their first car was based on a Lotus and shifted what, 4000? hardly the 100,000 they're doing today.

Moral of the story? everyone has to start somewhere, and Hydrogen technology could be far more practical than battery power. If it comes to that, Toyota, through putting some of the first production hydrogen vehicles on the road, will have all other car companies at arms length, as they will have more miles on the technology.

that hideous grill that

28 November 2016
that hideous grill that adorns all the lexus models is truly a blight.
YUK!

Apart from the hydrogen

29 November 2016
Apart from the hydrogen option, the normal petrol and petrol hybrid version should be good, a fantastic looking car..