BACK TO ALL NEWS
Currently reading: New Lexus LF-FC fuel cell concept to go on sale before 2020
UP NEXT
BMW opens door to M1-inspired electric supercar

The Lexus LF-FC hydrogen fuel cell concept will spawn a production version that will go on sale before 2020, the company has confirmed.

Speaking at the launch of the LC500h hybrid performance coupé, company officials confirmed that Lexus and Toyota boss Akio Toyoda wants the car on sale by the end of the decade.

The concept, first revealed at the Tokyo motor show last year, is said to 'offer a peek into the design and technology direction of the brand's future flagship sedan'.

A hydrogen fuel-cell electric powertrain powers the LF-FC concept, with one motor driving the rear wheels and electricity being sent to two in-wheel electric motors at the front. Lexus says the concept's drive system allows it to precisely distribute torque to all four wheels, resulting in 'exceptional dynamic handling and superior road stability'.

The firm says placing the fuel cell stack at the rear of the car - with the power control unit at the front and hydrogen storage tanks in a 'T' configuration - allow for 'optimal' weight distribution for a sports saloon. 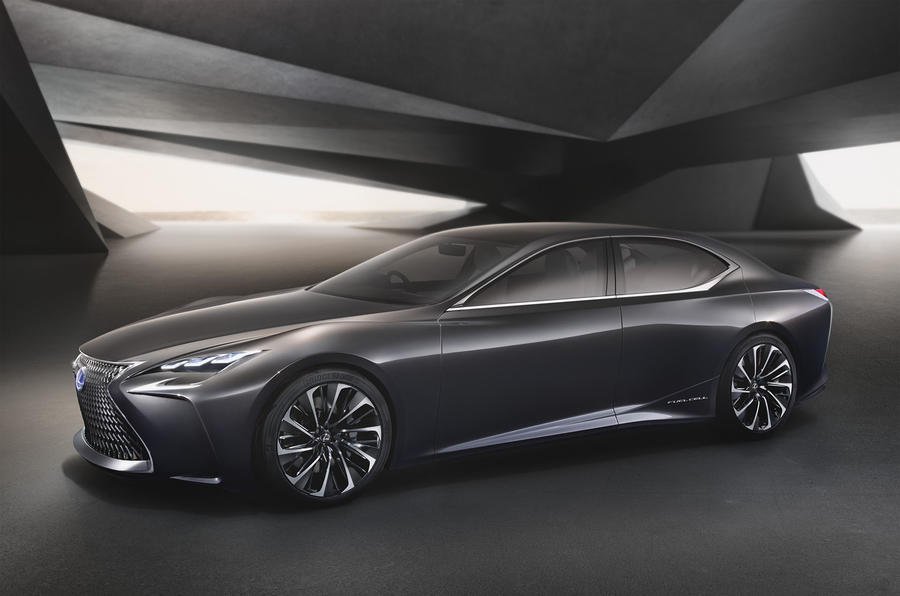 The car's hybrid powertrain operates in one of two driving modes depending on conditions. In 'cruising' mode, the fuel cell stack draws on hydrogen and creates electricity to drive the motor and recharge the battery, while in 'acceleration' mode both the battery and the fuel cell stack are used to power the car's main electric motor and its in-wheel electric motors for maximum power.

The four-door, four-seat concept also features several autonomous driving functions, and is said to provide 'a safe and efficient driving experience for its occupants and supports the vision of a world without traffic accidents'.

The concept's styling is dominated at the front by Lexus's signature grille, as well as a long bonnnet and swooping roofline. At the rear, the concept's futuristic rear light clusters echo those used on Toyota's hydrogen-powered car, the Mirai.

Inside, the spacious interior features a gesture-controlled infotainment system. Holographic projections are used to direct gestures for controlling audio and ventilation functions, while the majority of information is displayed on a digital instrument cluster in front of the driver. Rear passengers also get a touchscreen interface.

Speaking at the Tokyo show, Lexus president Tokuo Fukuichi said: "Lexus wants to surprise and evoke emotion with its distinctive design and forward-thinking technology. For us, it is more than just a car, and we should exceed conventional imagination. The LF-FC expresses our progressive luxury and high-tech vision of a not so distant future."

"The reason we are showing this car is because we are getting ready for a hydrogen-powered society." 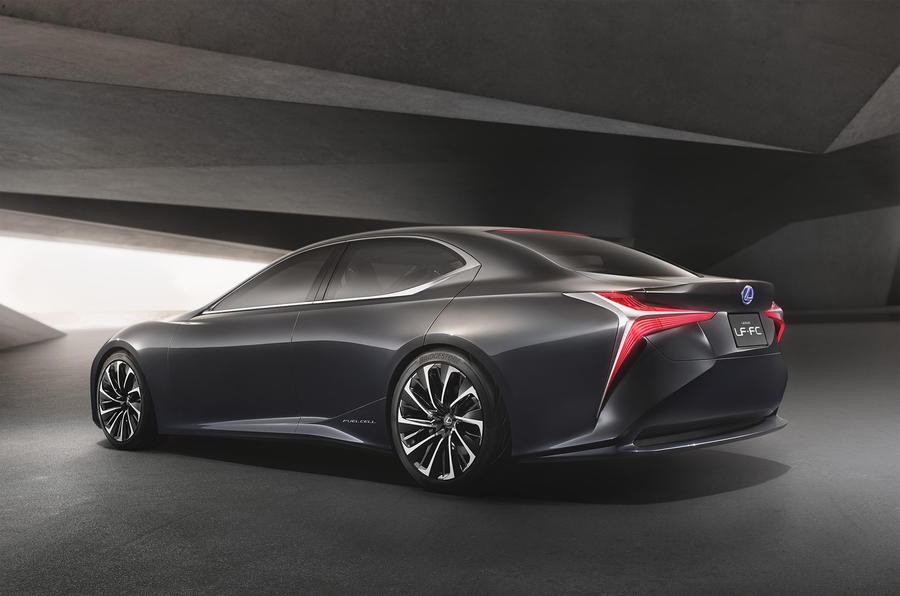 The production version of the LF-FC concept is likely to become a replacement for the LS luxury saloon. The new LS would compete in the same ultra-luxury market as the Audi A8, Mercedes-Benz S-Class and BMW 7-Series, and was initially tipped to be powered by a V8 hybrid powertrain with around 535bhp. Now it looks like at least one version of the LS will be offered with a hydrogen fuel cell powertrain instead, although conventional engines and hybrid setups can't be ruled out entirely.

Lexus Europe boss Alain Uyttenhoven said that when the production version goes on sale, it will be sold in "hundreds, not tens of thousands" of units. "It will be about adapting the technology to an existing car, not a bespoke one," he told Autocar "A first-generation premium hydrogen-powered car that won't compete with the Toyota Mirai even - this is a different market."

So Lexus want to "surprize" us, well why tell us of a car nearly 4 years before it's likely to be put into production. And only then it'll build no more than a few hundred. Ahhh free publicity who'd have thought it.
SAS32 4 November 2015

Wow that's absolutely stunning and it will be interesting to see how much of this makes it into production.
Norma Smellons 28 October 2015

Toyota clearly thinking of the car's later life as a minicab.